Ashez Looks At His 1KC Completionists On 2016

Ashez Looks At His 1KC Completionists on 2016
An Anniversary Special

It's scary to think that i've been here so many years already but it was recently brought to my attention that this month marks the fourth year anniversary of me being staff on this fabulous site. I'm only in this position due to you guys so i wanted to post something that would hopefully appeal to my long term followers and new people visiting the site so i've decided to look back at my 1KC completionists and feature them in an 2016 shortlist.

The only thing scarier than me being in this position for four years is the fact i've clocked up a staggering 15 completed 1000 goal challenges (you should seriously see how many i fail!) and i'm currently working on three as we speak! Unfortunately this feature will only look at 11 of the completionists as two were regens (Pedro Cunha - 2012 and Colin Sale - 2013) while two have missed the cut on 2016 (Carlos Fierro 2015 and Samuel Armenteros 2012).

Hopefully this article will be a trip of nostalgia for some while also being of interest to new members as they learn about players they might not have used before, now on with the show!

All images are from a day one save and the player names are links to the career thread. 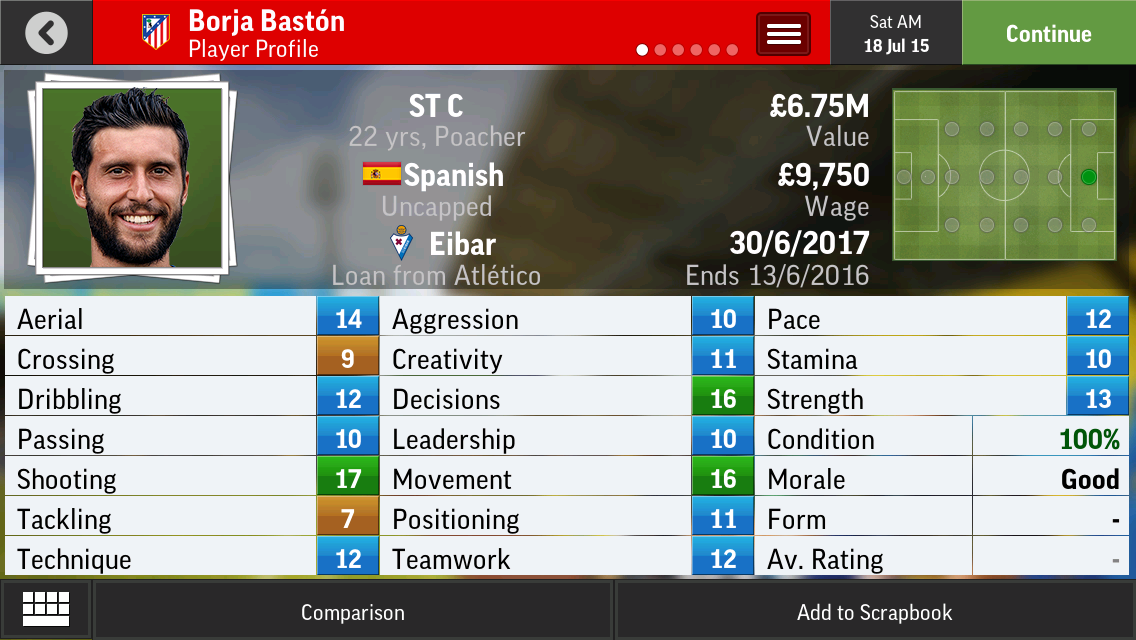 Borja is where it all began for me and after a few years of going under the radar the young Spanish striker is starting to make a name for himself on loan at Eibar from Atletico Madrid. Stat wise he catches the eye almost instantly as before any intensive training he already has 17 shooting and 16 movement! After some time on your training schedule of choice it wouldn't take much imagination to see him with 20 shooting, and solid greens in heading, dribbling, technique and strength! After his impressive form in real life i'm expecting to see more from young Borja over the coming years! If he does become the next big thing, just remember i found him first :P. 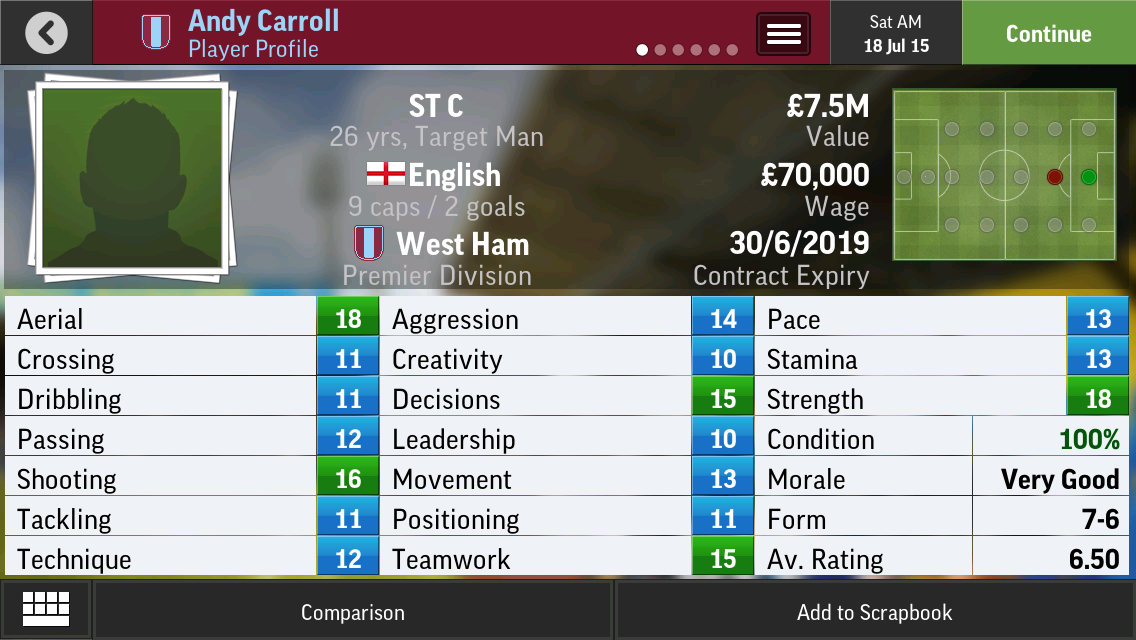 What a difference four years makes in the career of a young England international hey? At one time Carroll was a massive name in English football but a mixture of poor attitude and injury problems have led to him being somewhat of a laughing stock, especially when LFC are concerned. Thankfully Football Manager only focuses on the players ability and as you can see Carroll has everything he needs to be a solid target man for any team. That 18 strength will ensure he bullies the opposition defenders while his attacking stats show he's dangerous with the ball in the air or on the deck, certainly not what he could have been but a player well worth a look. 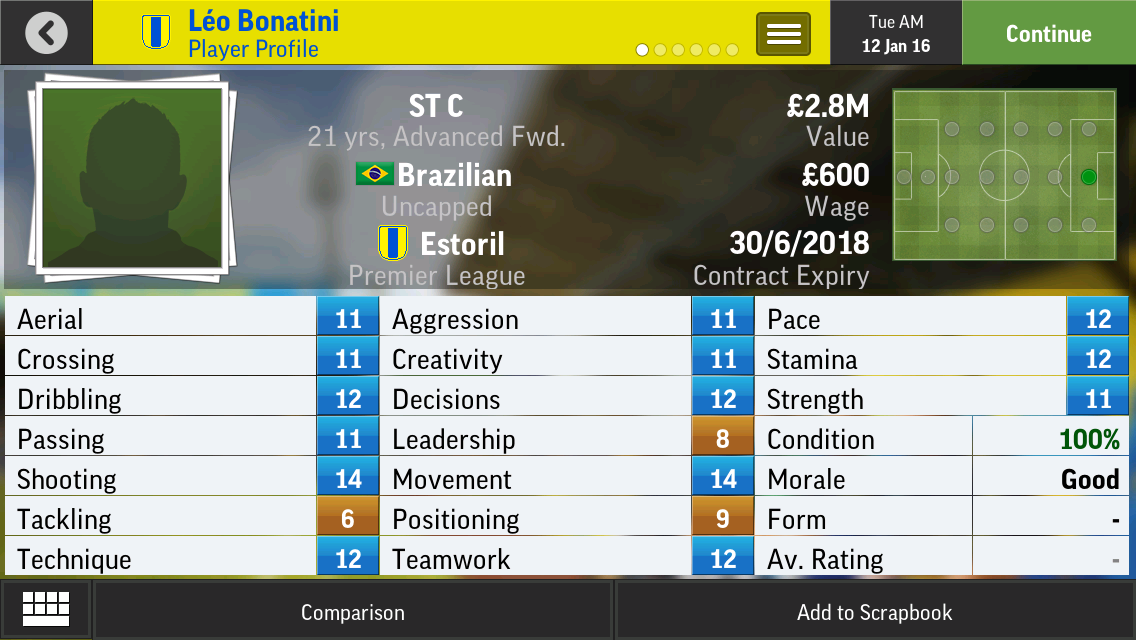 This career links directly to the one i'm currently playing as even back in 2012 i was trying to complete the 3000 goal challenge! Unfortunately that challenge failed but Leo continued on to claim the 1kc for himself. This lad took some tracking down but thankfully i remembered he moved to Juve not long after my save with him so i was able to find him again (i only had Leo to work with). Statwise he doesn't catch the eye at first glance but the potential of quality is hidden within those blue stats as they're all fairly high, under some intensive training you could easliy see him developing greens in shooting, dribbling, technique, movement and in his physical stats. Not the best striker going but Juve obviously saw something in  him (although the move doesn't seem to have worked out) so he might be a nice hidden gem for the right club. 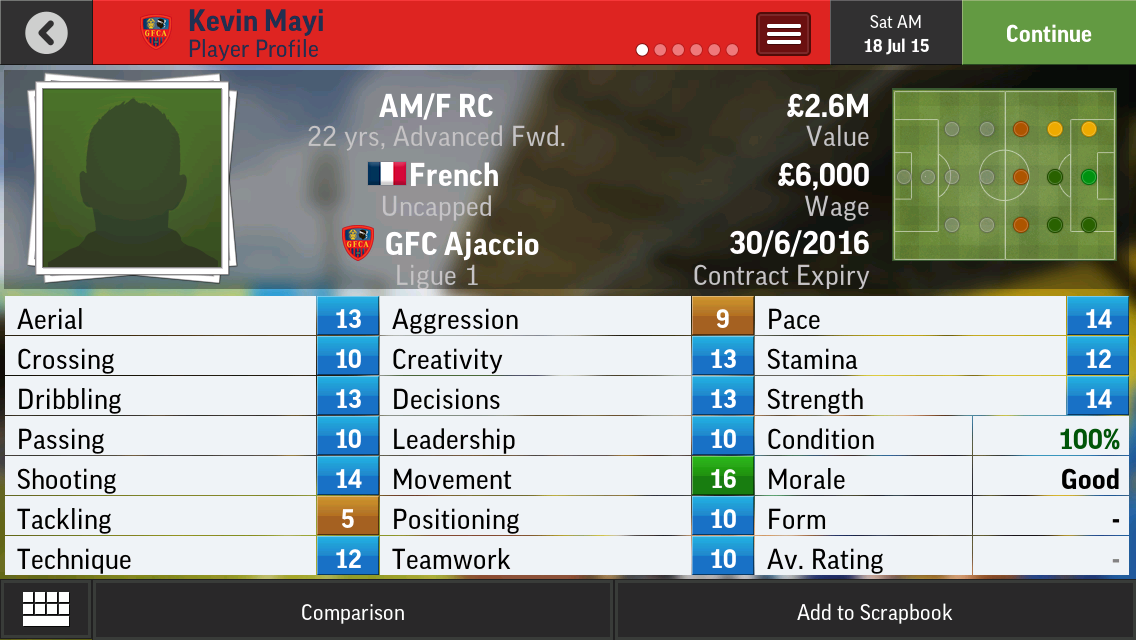 Kevin Mayi is another player who is dominated with blue stats but an educated eye will tell you he's very close to having everything he needs to do the job. Starting with 16 movement is fantastic for any striker but with some training Mayi should soon develop solid greens in all attacking aspects of his game including shooting, heading, creativity, decisions and dribbling! His physical stats should also improve nicely which could make him a solid addition for any team, especially as he has the ability and stat spread to play in a number of positions. He's young, has an expiring contract and seems to be available for a decent price and low wages, i'd certainly take another look at him. 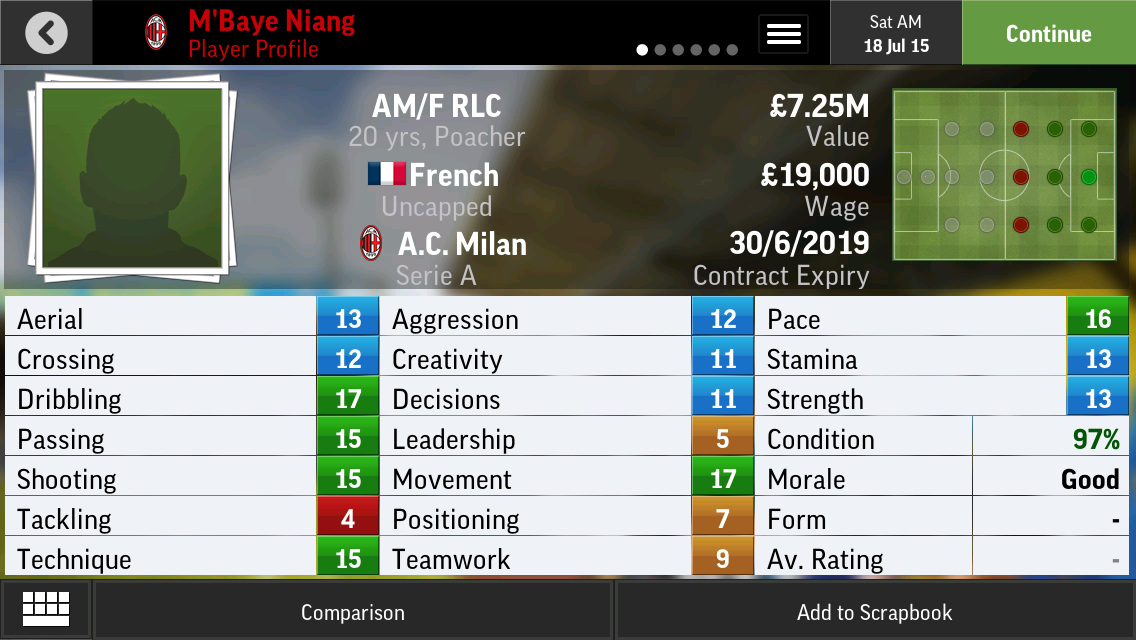 M'Baye Niang is a player i'm sure needs no introduction as he's been one of the best wonderkids on the game for as long as i can remember and it's clear to see why. At just 20 years of age this French international catches the eye instantly due to his fantastic attacking stats of 15 shooting, 17 movement and 17 dribbling, it's insane to think intensive training will make him even better! His popularity seems to have fallen since his move to Milan but hopefully this post will bring him back to the attention of Vibe as he's a player that certainly shouldn't be forgotten. It's not often i really fall in love with a wonderkid but Niang is definitely one of my favourite strikers of all time, seriously if you haven't used him before make sure you give him a run out! 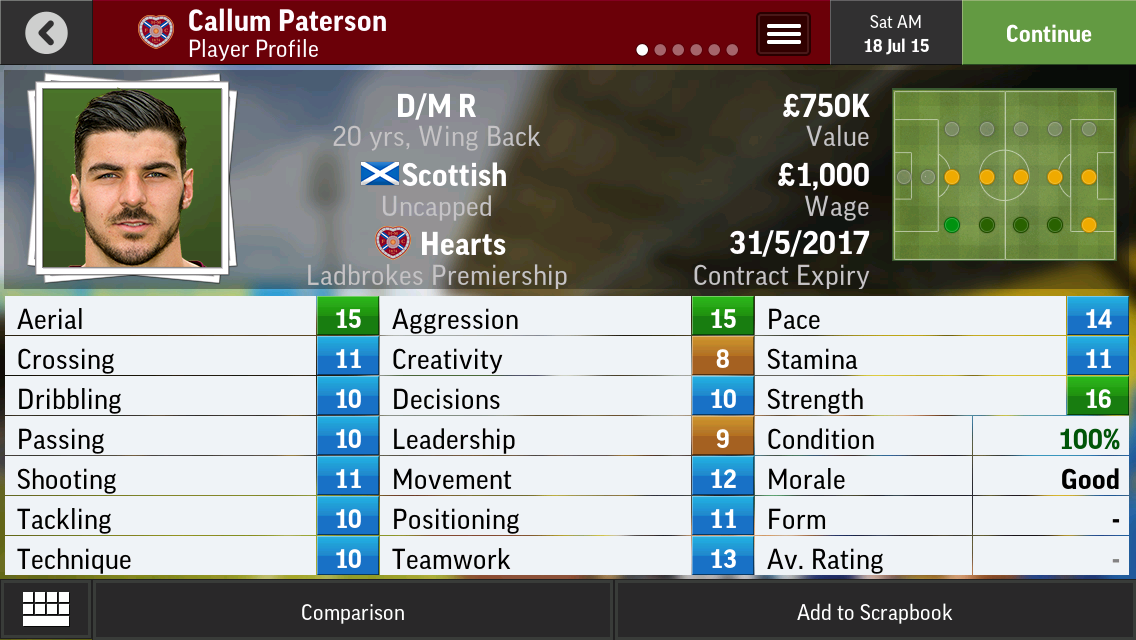 Paterson is one of the most interesting players on this list to look back on because back in 2013 he was a striker but now he's a right back! Does that mean i've completed the 1kc with a defender? His positions may have changed but it's his targetman stats that still catch the eye and i think i'd still rather him leading the line than protecting my goal as his defensive stats are far from ideal. With intensive training i'd be interested to see if we could bring the striker in him back out or if he's now designed as a more defensive minded player? Certainly an interesting one in which i have no idea how to highlight for 2016! 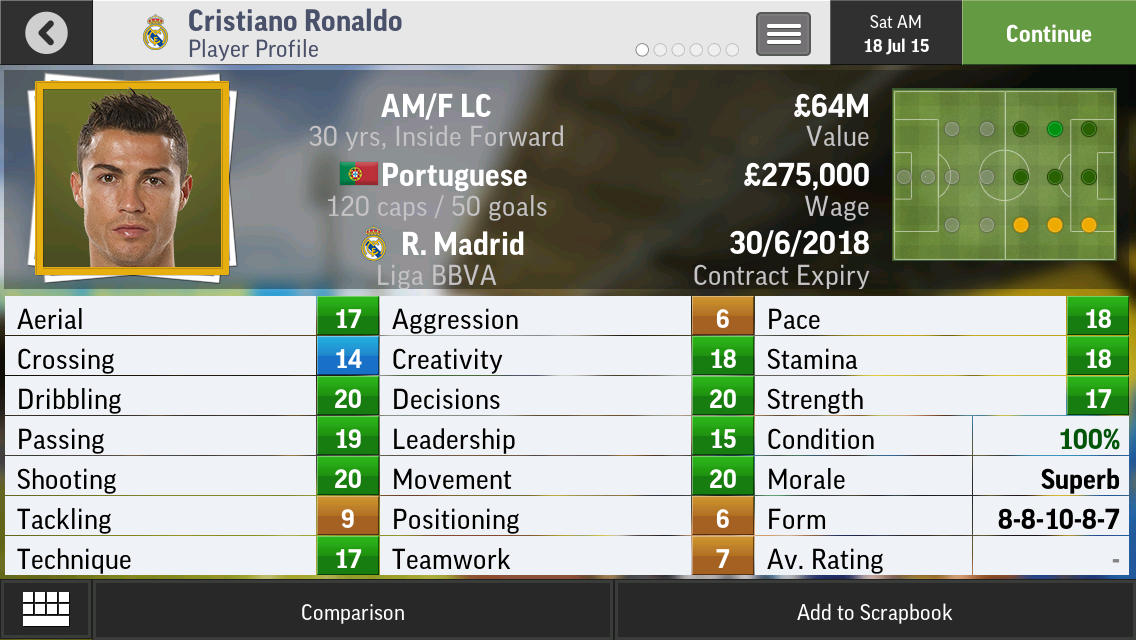 For my money Ronaldo is the best goal scoring player Football Manager has ever seen and this save makes me miss the madness of 2013 so much! 2013 was one wacky year where so much was possible and the goals flowed like an endless stream, seriously those were the days, even though it was broken as hell! Moving onto Ronaldo though i'm not sure what i can say that hasn't been said before? His stats are verging on godly as he has 20 shooting, 20 movement, 20 dribbling, 17 heading, 18 pace, 18 creativity and 19 passing! He's just unnatural! While Ronaldo has plenty of years left in him in real life it might be worth unleashing him on 2016 before anymore signs of age start to creep into his game. 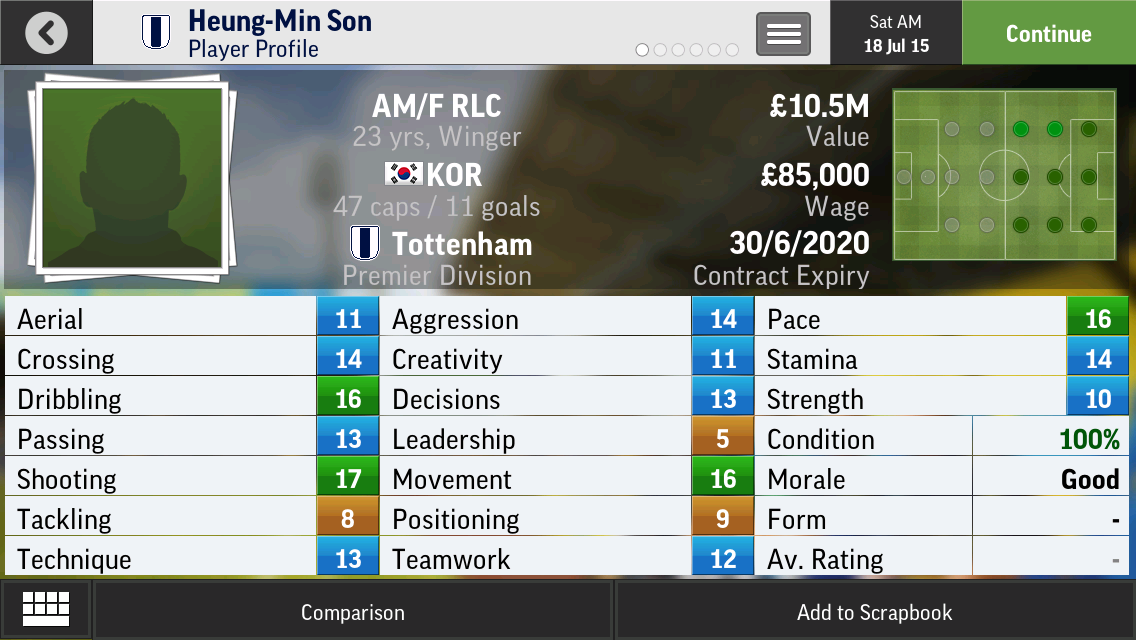 Son is a player i'm sure many of you are aware of as the Asian sensation has been tearing Germany up for years which has earned him a move to English Premier League side Tottenham. Son is another player i feel has gone somewhat under the radar on Vibe but this winger come striker is another one of my personal favourites. Stat wise he has the ability to play in the wide positions or through the middle but i personally like using him as a striker where he can abuse his 17 shooting stat but when that is combined with his pace and dribbling ability he makes an equally as good inside forward, just remember with intensive training he'll get either better! 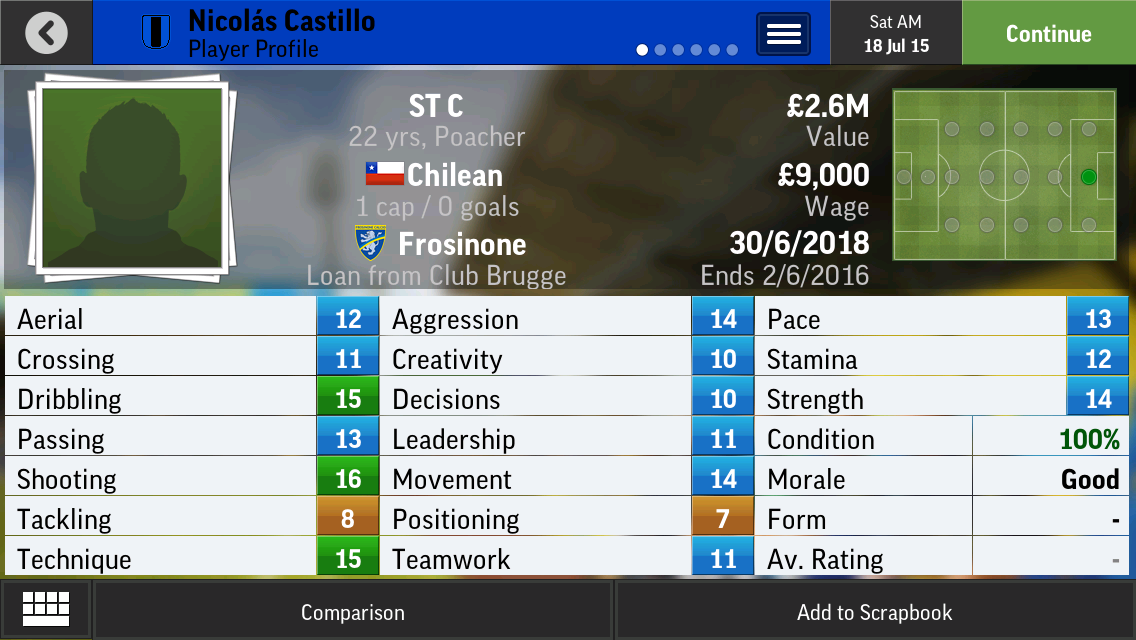 Castillo was the first player of 2014 to really catch my imagination, but i'm sure you guys all remember Eldin more! Stat wise the Chilean international starts off with solid attacking stats including 15 technique, 16 shooting and 15 dribbling while he has a lot of stats on the verge which intensive training should turn green like his heading, passing, movement and physical stats. Castillo is an interesting option as he clearly has the ability and he should be fairly affordable due to his low starting wage and the value the club have on him. 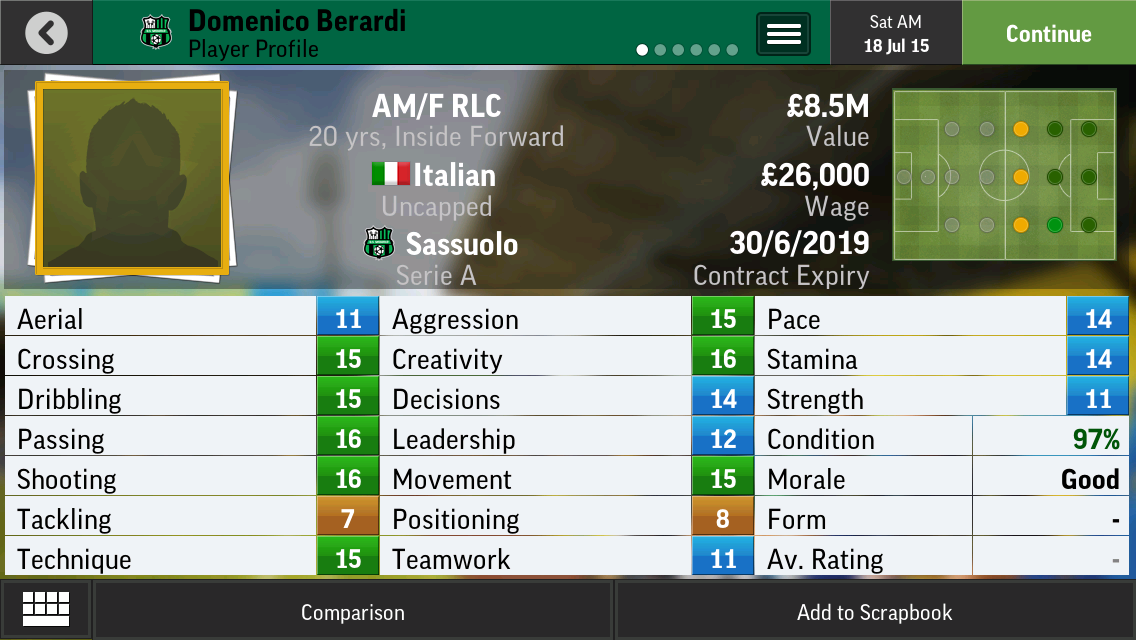 My Inception save is one of my proudest moments on Vibe and Berardi was the heart of that challenge, as strikers go Berardi is likely my favourite striker i've used in recent memory, he's just fantastic! Berardi is one of the most in demand attackers in Europe at the moment and this is clearly reflected by FMM as his stat spread is mind boggling! At just 20 years of age this Italian superstar has more greens than your average Sunday dinner as he possesses 16 shooting, 16 passing, 15 technique, 15 crossing, 15 dribbling and 15 movement, just imagine him after some intensive training! Unfortunately he's been moved from a central striker to a right winger but for me Berardi is a must use, he's just that good! 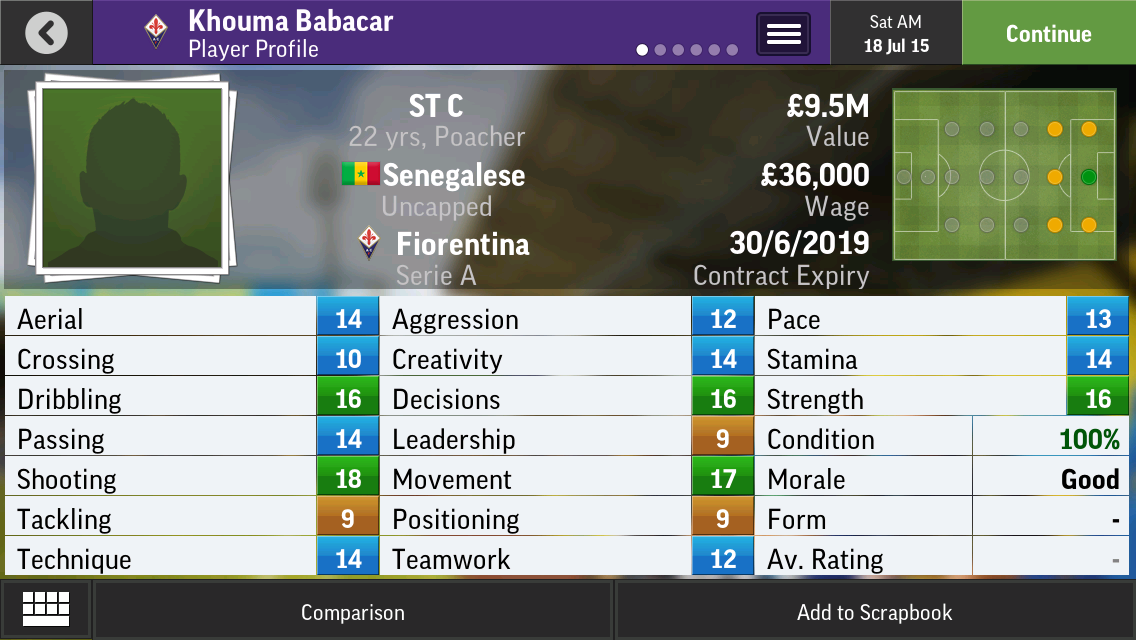 Back in the day Babacar was one of the go to wonderkids just like Barbosa and Berardi are now and it appeals in real life he's finally starting to show the destruction he's been causing on FMM for years. Looking at the African's stats it's clear to see he's a powerhouse with impressive strength and decent heading but on a day one save he's also solid with the ball on the ground thanks to his 18 shooting stat. He also has the ability to find space thanks to his movement stat or 17 while he's also not afraid to move with the ball if his 16 dribbling stat is anything to go by. As you can see he's impressive already but intensive training will give this beast a nice boost which will hopefully make him popular again among the community. He was once often compared to Lukaku and as things stand i see him reaching that level once again!

The game's not been out long but my first 1kc of the year is well underway but it's not even a 1kc as it's actually a 3000 goal challenge! That's right i've returned to my 2012 idea as i try and get three strikers to hit 1k at the same time! If this idea interests you make sure you click the link below in which you'll be able to see if i can achieve my latest goals. 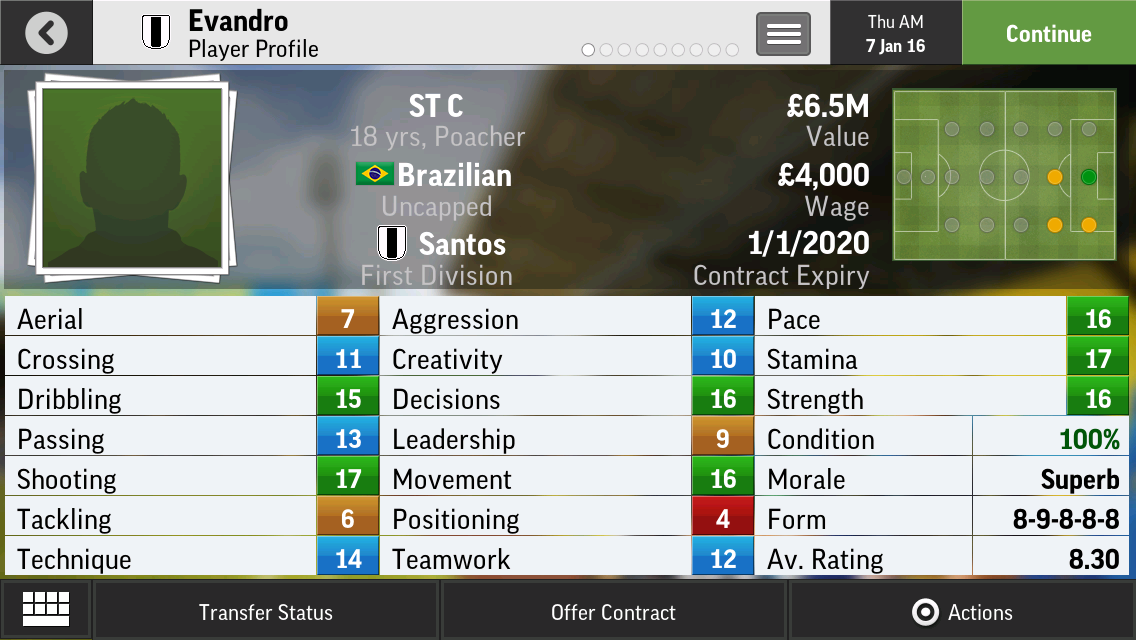 Thank you for taking this trip down memory lane with me and i hope you enjoyed looking back at these players as much as i did. Here's to four more years working with this fantastic site and community!

As always thank you for viewing and please remember to leave a comment.