Winter in Manchester - How to solve The Devils’ Problems Winter is coming… (no pun intended)

With the January transfer window about being opened,we shall take a look at how Man Utd should handle the transfers necessary to helping them rise again in the second half of the season…if there are funds available that is...

United,under Louis Van Gaal (who at the moment is being in a position no manager wants to be),are struggling to get good results and if this issue doesn't be addressed sooner,the season could potentially head for the worst,

Here are some of the issues…

The Lack of Creative Spark

The United currently lacking a player with creativity comparable to those producing comics of any sorts or animated movies that usually leave you craving for more,Mata is certainly the player who you rely on to create chances for Rooney and Co to convert,but he isn't doing that at the moment.

Some statistics for you,United are the team with the most passes per shot with almost 80,talk about passing the ball around without the thought of attacking,dreadful to say the least.

So,who or what can solve United’s chance creating issues?

The Creative Playmakers United Would Target There was a lot of speculation about Nolito and the interest he received from Catalan giants Barcelona,but is it possible for United to lure him away from Camp Nou and into The Theatre of Dreams?

Nolito is an amazing player,both in creating chances and finishing them,he has 8 goals and 5 assists in 15 appearances this season for Celta.

He is known for his dribbling skills and averages 2.4 dribbles per game,he has made 36 successful dribbles this season thus far.

While United’s players lack a vision of spotting chances,Nolito is completely that as he makes and average of 2.9 key passes per game,while he also boasts a pass success rate of 67.7%,averaging almost 42 passes per game and making 390 accurate short passes this season.

He would also make the occasional cut inside to attempt shots,he takes a very decent 3.5 shots per game,usually with his trusty right foot.Of the 53 shots he's fired,23 of them were taken from outside the box,29 were in the penalty area and the one inside the 6-yard box.

Nolito is a hard working player who loves to venture around the edges of the box on the left,either get a cross in or cut inside to take a shot .He's exceptionally good at dribbling and always looks to play through balls once he spots a yard of space for his teammate to run.He's also known as a set piece specialist. 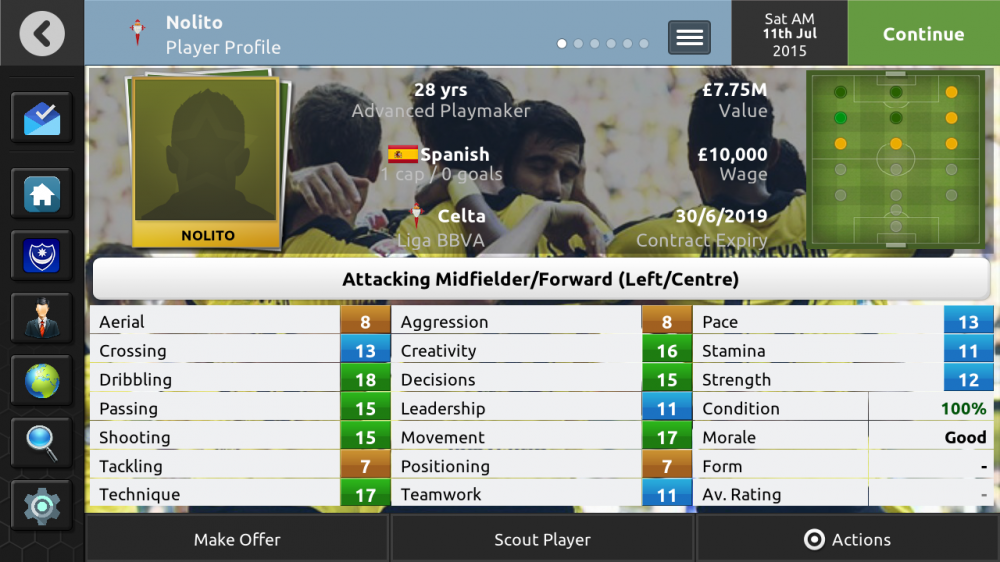 Like his real life counterpart,his primary attributes are Dribbling,Passing,Shooting,Technique,Creativity,Decisions & Movement,though in my opinion his pace and stamina could be better. 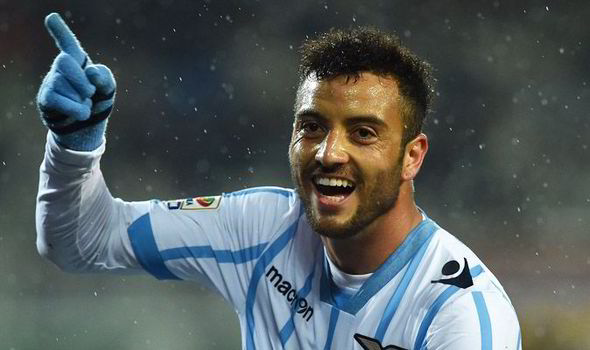 Felipe Anderson was long tipped to be the NO.1 target for LVG in January,the 22-year old is currently plying his trade at Lazio in the Serie A,where his talent has caught the attention of major clubs around Europe.And it seems United are keen on ticking off this winger on their shopping list this Winter…

Felipe has put in some average performances throughout this season,scoring 5 and providing 1 in his 21 games so far,not the best and certainly doesn't serve his transfer value any justice.

He averages 2.3 dribbles per game and has completed 48 successful dribbles out of 93.

He is more of a winger than a forward as his shots per game aren't as much,an average of 1.5 shots per game,with a shot accuracy of 37.5%.

His passing is far more better,as he has a passing accuracy of 68.9%,making an average of 29 passes per game.

Felipe is a player who loves to take long shots whenever he sees an opening,usually cutting inside before attempting that.He is also a playmaker by trade,playing clever through balls,dribbling past opposition and also likes to put in a tackle. 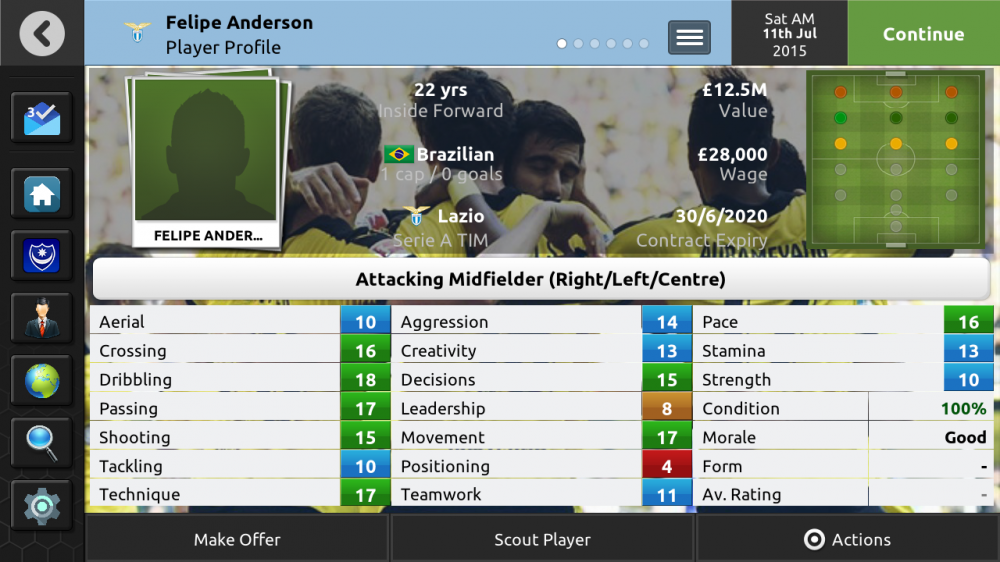 His Stats are perfect for an InF like him,you can imagine how his attributes would be like after some IT, godlike to say the least. 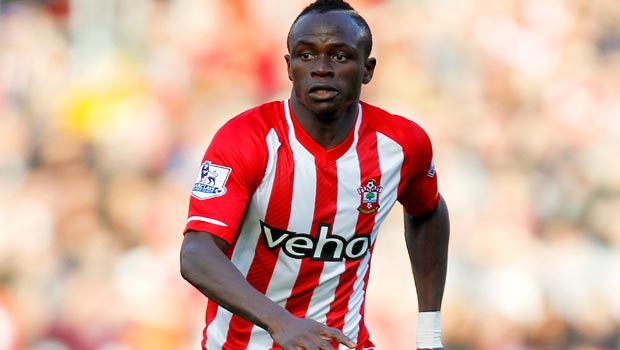 Having already been a target in the Summer,LVG would sure love to launch another bid for Senegalese winger Sadio Mane,who is also the current record holder for the fastest hat trick in BPL history(2 mins 56 secs),for an estimated fee of £40m (too much?) that will possibly be too hard to resist for the Saints.

Mane is a very key player for Southampton and their Premier League campaign,bagging 8 goals and 6 assists in 19 games and is quickly emerging as a force to be reckoned with for years to come.

Mane is a player who often runs by the byline on both flanks,whipping in bucket loads of dangerous crosses into the box,causing havoc amongst the opposition.He averages 0.6 crosses per game and 12 of his 40 crosses were able to find a teammate.

Mane has the best passing success rate amongst all of the players in this article,82.6% isn't too shabby.He makes 28.2 passes per game and has made a accurate short pass 427 times,outstanding.He also gets 1.4 key passes per game.

Mane is also a very skillful dribbler,managing 2.6 dribbles per game,49 of his 86 attempted dribbles were successful,a pretty decent ratio to be fair.

Of his 50 total shots,28 of them were fired by his right while 20 of them were hit by his left,proving his ability to use both feet while 2 of those shots were headed attempts.

Sadio Mane is a pacy winger who always draws foul from opponents with his wicked technique and movement.He does likes to play short passes and one-two’s.On the flip side though,he's very aggressive and gets a lot of bookings. 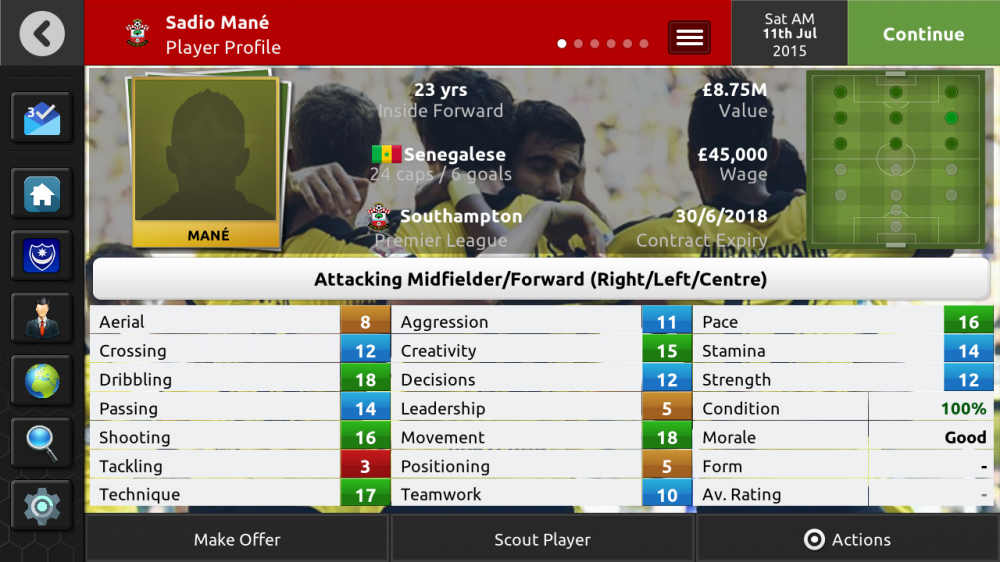 His starting attributes are not as eye-catching as yet,that crossing worries me to be honest but with some IT I'm sure he'll turn those high blues into greens. 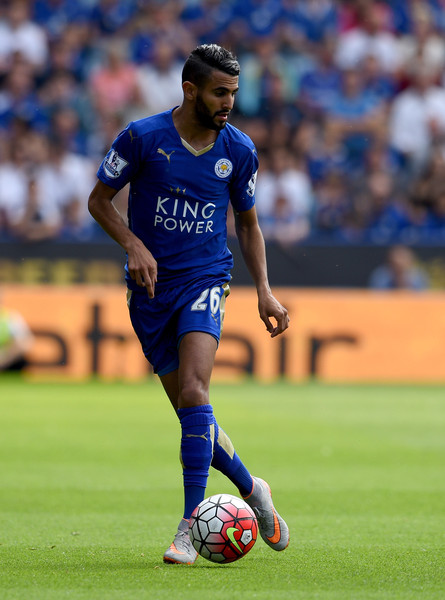 The best bargain ever? Signed for just a minimum amount of £400k from Le Havre in 2014,the young Algerian has certainly punched above his weight and is now rubbing it with the big boys.His string of amazing performances has definitely attracted United’s very own scouts,and the possibilities of a bid by United for him are very high…

What Does The Statistics Say?

In his 18 appearances for The Foxes so far,he netted 14 times and laid on 7 for his teammates,a pretty excellent run of form.

Mahrez has averaged 3.5 dribbles per game,much more than anyone on this list,and has successfully made 63 dribbles out of 104.

He usually plays on the left with his ‘magical ‘ left foot,he often sends curling crosses which are hard to deal with into the box,he has an average of 1.2 crosses per game,21 of his 60 crosses were accurate.

His shot accuracy rate is 53%,a pretty impressive number,as 26 of his 49 shots were on target.

He's no stranger when it comes to taking set pieces,his free kicks are the deadliest and his penalties are dead accurate.

Mahrez is a player who makes a lot of key passes and through balls,his attacking talent is seen clearly whenever he launches an attack,his good with the ball at his feet and takes long shots when necessary. He is the perfect winger for you,although his attributes aren't fully grown yet,otherwise he'd be a world beater.But IT always does the job.

The Lack Of Goalscoring Threat 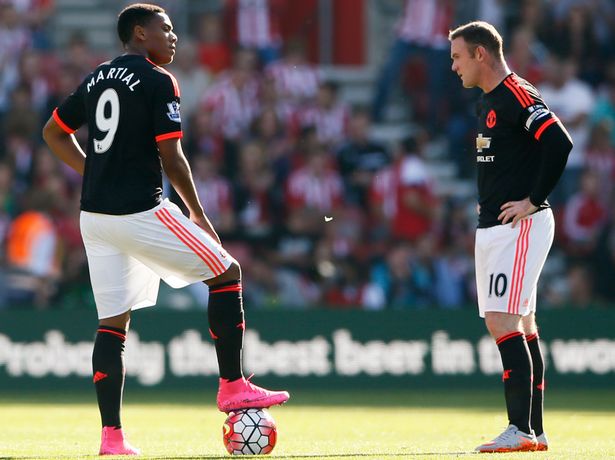 When Depay and Martial arrived respectively,everyone was expecting a goal ridden season,yet they failed to live up to preseason expectations,along with underperforming Wayne Rooney,the trio have managed… 8…..so far,you might be starting to think something’s wrong with my keyboard,but no my keyboard is perfectly fine,the only thing wrong are them unable to use their goalscoring abilities and help the team.

In contrast,Mahrez and fellow partner Vardy has already bagged 29 goals between the two of them alone,you're starting to feel United played the trio at defence…

A key factor behind this lack of attacking threat,is because LVG playing Martial and Rooney incorrectly. Don’t get what I mean?

I'll tell you this,

In LVG’s current system,he's playing Rooney as a second striker,also known as a Deep Lying Forward,which obviously indicates that Rooney will sit much deeper on the pitch and the team will lose his attacking flair up front.

While on the other hand,young Martial,is having problems playing up front as he's the lone striker,having just arrived from a not so tough French Ligue 1,anyone would certainly have problems playing in the much more physically demanding league in the BPL,which is the reason Martial can't even hit a barn door at the moment.

Onto Depay,nothing much needed to say,he's still struggling to hit the ground running,he hopefully might if given some more first team opportunities in the very near future. Now,some players to solve this issue… Romelu Lukaku is a very prolific goalscorer and has already reached 50 club goals,and at the age of 22,he's just showing the world of what's about to come.Securing the mighty Belgian would already become some kind of achievement for United,let alone his performances….


What does the Statistics Say?

Lukaku is currently what everyone know as ‘Beast Mode’ with his 8 match goalscoring run coming to an end against Newcastle.He has found the back of the net 15 times in 19 appearances for the club.

Lukaku is a proven goalscorer with his incredible finishing and composure in front of goal.He has a big stature and often uses his physical advantage to out muscle defenders and get a headed attempt. 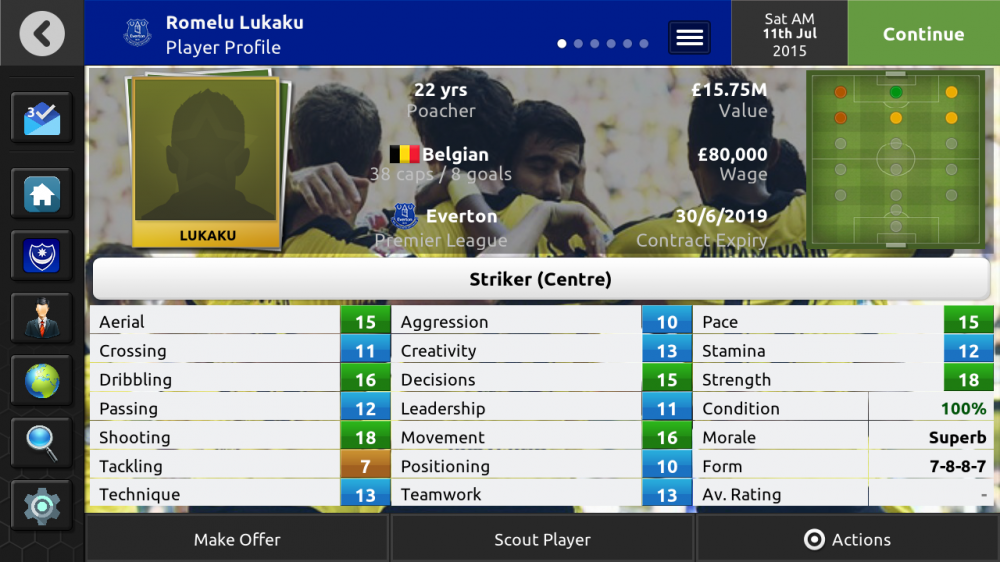 Lukaku is already given a bunch of amazing attributes at the start of the game and would make the perfect striker you could possibly have. 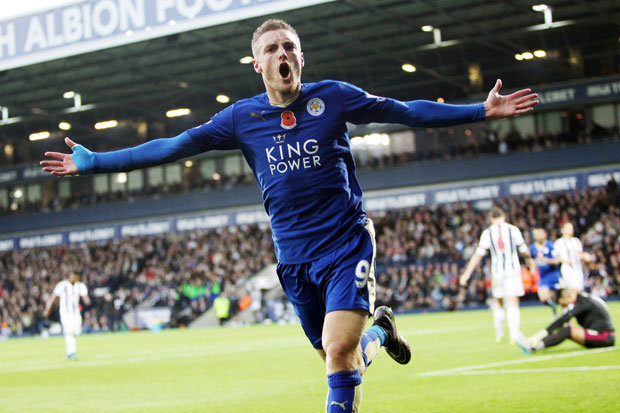 Earlier on this season,Vardy broke the Premier League record for most consecutive games scored against of all teams,United.But United didn't mind,they're now planning to launch a double raid for Leicester’s duo,Vardy & Mahrez. But Ranieri will surely be reluctant to let go of the team’s priced assets,or will he?

Vardy is an out and out goalscorer whose form this season has attracted the likes of Chelsea,Manchester City and United,etc. He has found the net 15 times in 19 games.

He is a very pacy striker who loves to harass the opponents on and off the ball,pouncing on loose balls and finishing it. He is also very good at holding on the ball for as long as possible until he spots a teammate to pass to. He does like to do flick ons for teammates and is very effective in terms of contributing to the team defensively. To be honest,SI should've gave Vardy a better attribute boost,but nevertheless,he's still a very deadly striker with an eye for goal. 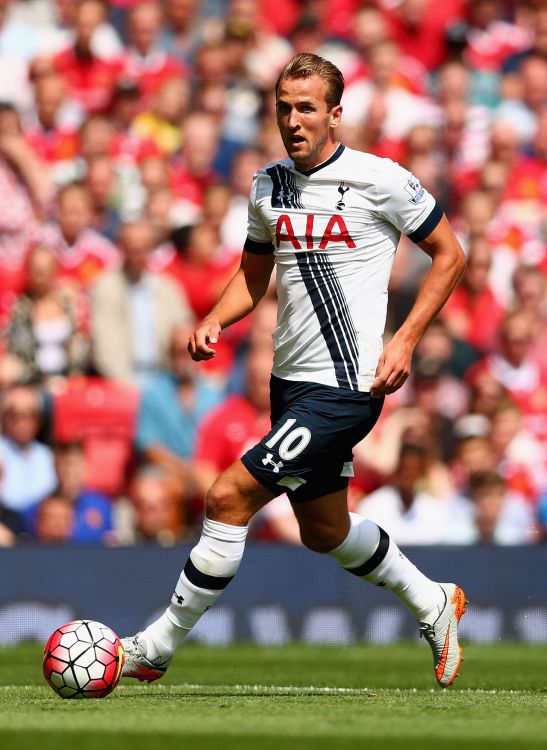 Harry Kane has been somewhat a formality for Spurs this past two seasons,he's banging goals for fun as long as White Hart Lane are concerned,although a move to bitter rivals might seem unlikely,but if United can splash the cash,why not?


What Does The Statistics Say?

Kane has 16 goals in his 24 appearances,also grabbing 2 Assists.

He uses his right foot the most,with 66 shots,while he managed 12 with his left and 8 with his head.

Kane is a strong forward who has a lot of composure in front of goal and has deadly finishing,he can take long shots and get headers in too. He's also very reliable when helping the team defensively. 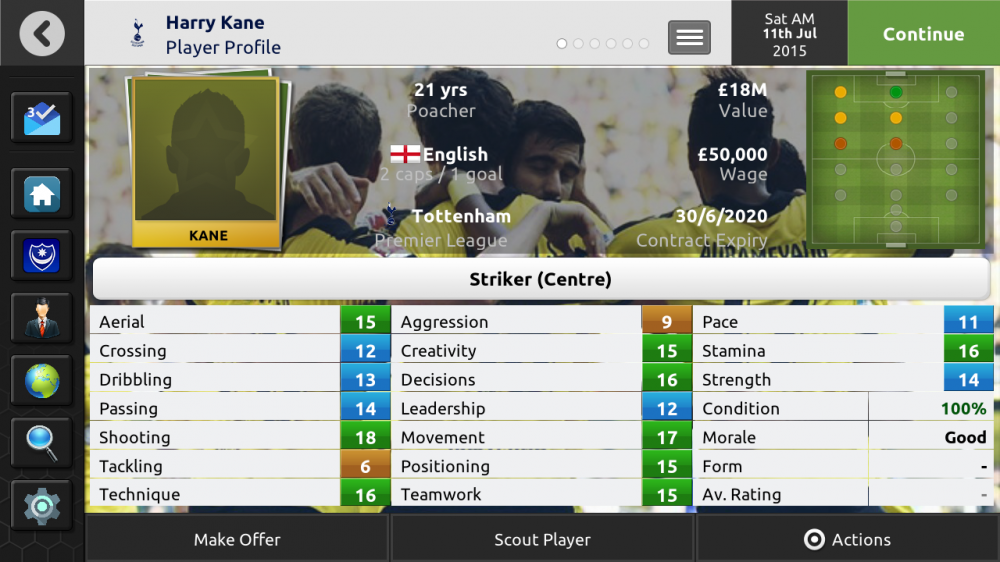 He's already a world class striker with some more years later he could certainly be the real deal.

Although I can't cover all areas of the team that needs strengthening,I can list them out with some honorable mentions.

Although my opinions might differ with others,I hope you enjoyed reading this as it's took quite some time for me to gather information,plan the layout and write up.

Comments and feedback are welcome