Ok, let's cut straight to the chase: Why are coaches so poorly implemented in FMM16? The lack of substance to the coaching aspect is kinda baffling, seeing as they are one of the most important parts of the background of any football club, both in real life and in FM, FMM's bigger brother. Besides seeing a 'Natural', 'Normal' or 'Poor' aptitude, what they coach, and the level of coaching badges they are currently at, we have next to no info on the coaches themselves.

On an opposition manager's profile, we can see plenty of stats (more than the human managers, in fact, why so? But this is a whole different discussion), a few of which could probably be appropriated to coaches; determination, youth, loyalty, etc. As of now, coaches seem almost invisible, besides the odd message from your player praising the impact of one of the coaches, or vice versa; coaches play a seemingly non-existent role. To be perfectly honest, I'm not seeing that much of a difference in player growth between FMH15's no-coaches and FMM16's coaching.

Now it wouldn't be too annoying if coaches were just extra dead weight, however, coaches can also mess up your game in certain ways.

Say you sign your star veteran player as one of your coaches, but in your staff page you realise something terrible, your star player's apititiude rating is 'Poor'! Being the perfectionist you are, you decide to sack him, and let him focus solely on providing good perfomances on the pitch, not off it. You figure you can sign someone else, after all, there are plenty of coaches out there, plus anyway, it's not like you have to pay coaches wages anyway, seems like they work for free!

However, in 90% of cases, if you take a look at the 'Personal' page for your favourite star player, you'll notice something terrible; namely, there is now a 'Has a strained relationship with [Manager Name]'

This is point one of my 'List of Annoying Things about Coaches'. There is no way to check the aptitude of a player or even to gauge their interest in being a coach once they reach their twilight years. It's practically a shot in the dark, you might want to employ Messi as your right hand Ass Man  at FC United of Manchester in 2024, but to do so, first of all, you have to sign him as a player; this is an extension of point one, and I know some people have already brought this up: To hire a old player not in your club as a coach, you have to first sign him as a player.

This makes no sense whatsoever, you shouldn't have to take up a spot in your 36 player-limit just to accomodate a coach. Expanding on this, trying to get around this by putting a player-coach in the reserves means he becomes a coach for your reserves, and their apparent benefits only apply to your reserve players. This is annoying for people who like to keep their top youth talent in their first team, whether to gain exposure or just for ease of access, and is a flaw in the coaching system.

This also means to get that extra growth bonus for your first team players, player-coaches have to be in the first team. Also, sacking a player-coach as a coach can result in you having a strained relationship with him, which sucks if you still intend on playing that player in your first team.

So I've covered what I've perceived to be the main faults of coaches in FMM16, but lemme just go over them again:

1) Coaches have barely any info to their name, besides a few words being thrown here and there, 'Poor', 'Motivational', 'Gold', 'Youth'.

2) The effect of coaches is poorly communicated. We don't even know if they make that big a difference, since most growth is still being influenced by the state of your training facilities. There are also other things we do not know, what are the odds of a coach passing their exam? We know it's higher for 'Natural' aptitude coaches, but how much higher? Is it enough to justify sacking a gold 'Normal' coach for a silver 'Natural' coach?

3) Besides spending money in their coaching exams, and also on signing coaches already employed by other clubs, coaches require next to no maintenance. After your straight up payment, coaches apparently require no wages and are quite happy to work for free.

If you wanna check an external player's interest, well good luck with that. The only way you can do that is by signing them, if that player is already playing for a club, you might have to pay a transfer fee for him, plus wages. Then if they don't wanna coach, then well, bad luck mate (the only way to circumvent this is to save, sign the player, and then reset if they don't wanna coach, if you don't want to play them as a player and want your money back).

4a) Once you offer a role to one of your players, sacking him may result in a 'strained relationship' appearing between the two of you. This provides the foundation for a future transfer request, and may also debilitate his perfomances in matches if you still want to play that player. He will also not have any interest in coaching for you in the future. 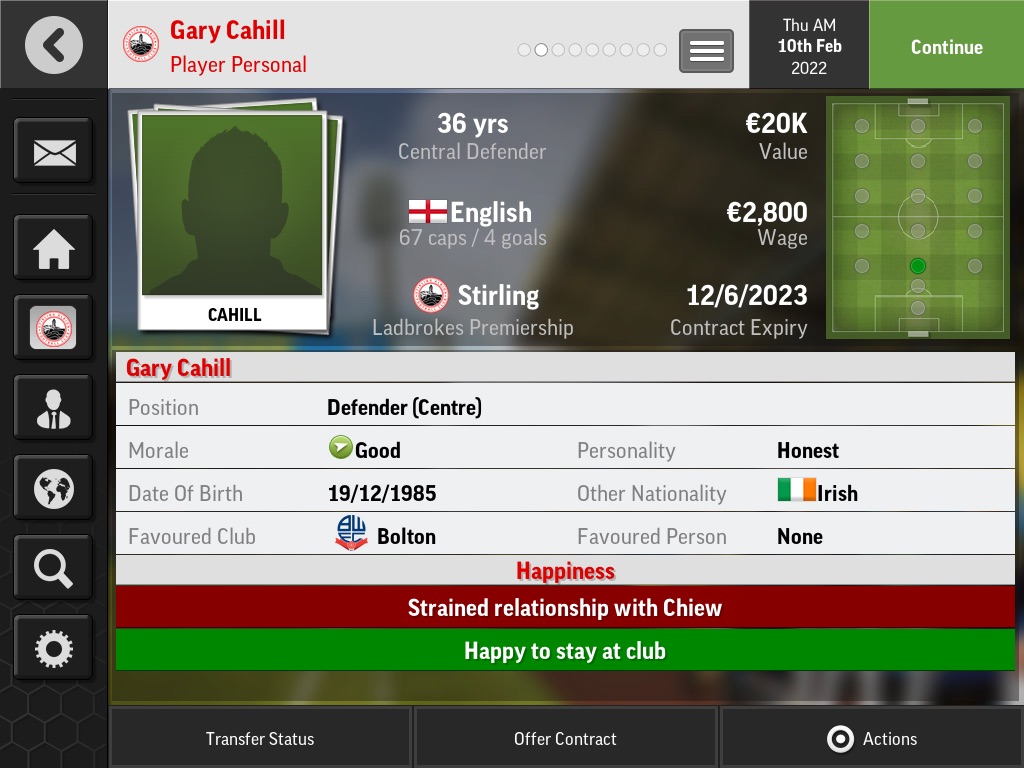 5) Signing a player-coach means you'll have to put him in your first team if you want to have his apparent 'benefits' for your first team. If not, his team will appear as '[Your team name]'s Reserves', and his benefits will only apply for your reserves. 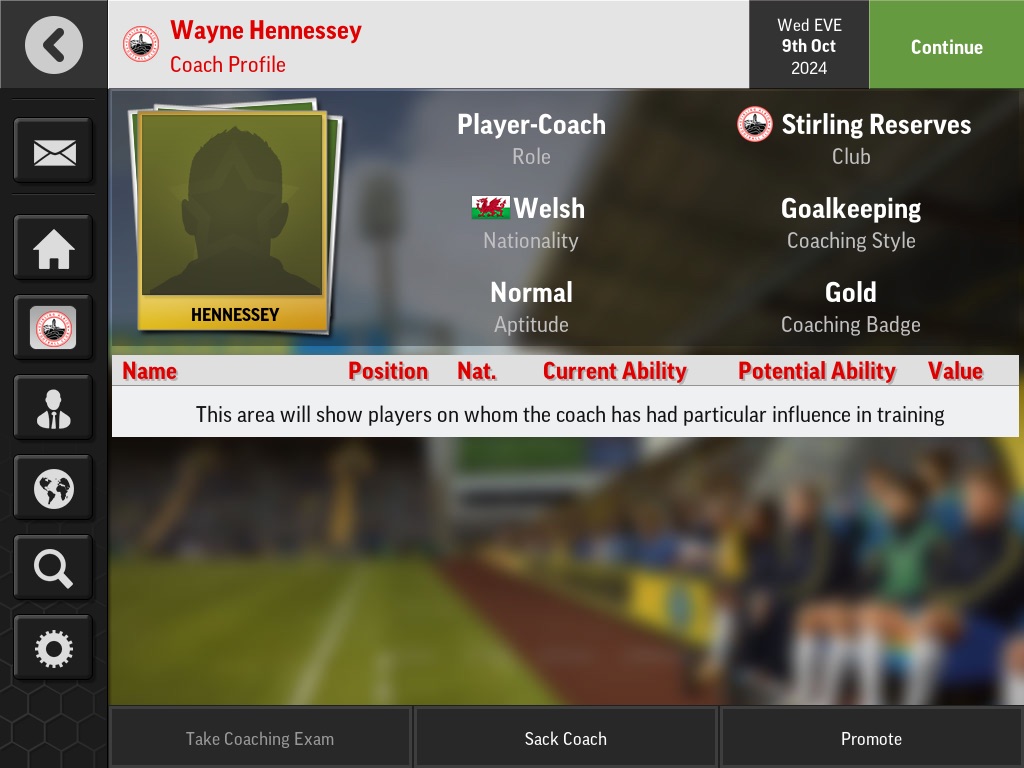 6) Something I didn't mention before, but will here, is that if a player leaves, he will also leave as a coach. This isn't a problem if players intend to retire at your club, but a big problem appears if this is not true. If a a player's contract runs out in the same year before he intends to retire, you'll have no way of keeping him at your club until he retires, since retiring players don't sign new contracts. This means he leaves before getting a chance to stay in at the club as a coach. This happened to me after I had managed to convince Diego Costa (of all people) to coach as an Attacking Coach at Stirling. I was left with an empty spot that I didn't notice for an in-game year and a head-scratching as I wondered what happened to him. Players can also refuse to sign new contracts if they think they are not getting enough game time, which is, as you can guess, another problem if you only keep them in your team as a coach.

Also, as a little side note, coaches are also buggy. I don't know if this is just me, but 'Natural' aptitude Player-Coaches don't increase their badge levels even if they pass their exam. 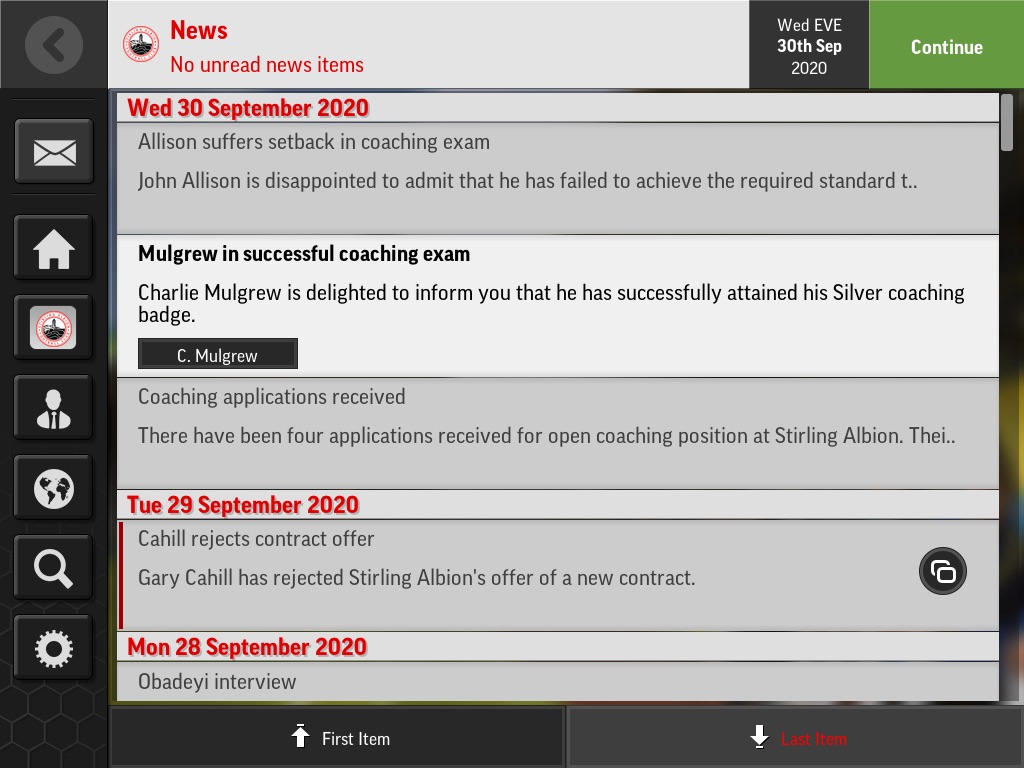 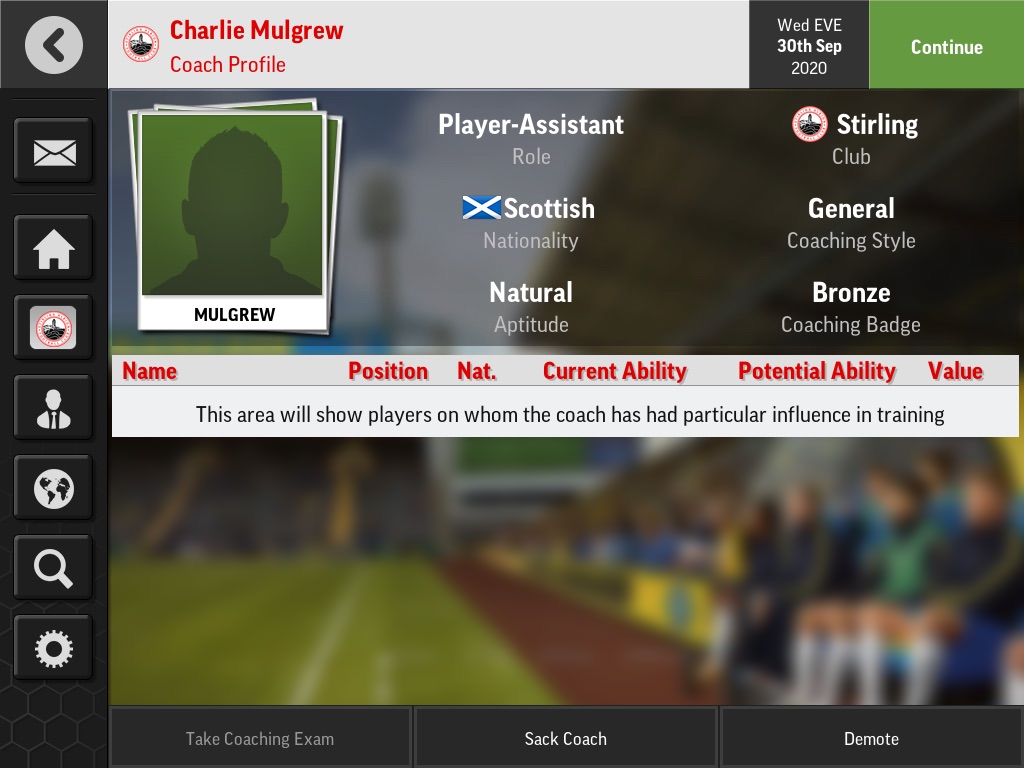 Resuming a save from a cloud save also resulted in some confusing images for my manager's coaching profile. I was at a gold coaching level according to the staff page, but still received news updates on attaining my 'silver' and 'gold' badges.

Anyone else have anything to say about coaches? If you managed to read through the long, comprehensive list, kudos, and lemme know what you think.

[TL;DR] If you couldn't be bothered reading the entire post, but are interested in the main gist of this coach rant, I'd recommend you at least read the numbered and bolded list, that explains my points quite nicely, if you're too lazy to read even that, I've got a short version for you below:

Coaches suck. Why? Because you don't know if a player wants to be a coach, there's barely any info on coaches, sacking a player-coach can make him dislike you, you'll have to play him in your first team, and also his contract could also expire before he retires at your club as a coach, meaning he's gone. Coaches suck.