How to Build a Solid Defense

How to Build a Solid Defense

You've always used the same tactic with slighter alterations varying from save to save,you know it always works well for you,as it brings loads of goals,but your most recent save,however,has seen your team leaking too many goals for your liking.

You think to yourself,how am I going to make my team better defensively? Well,you've came to the right place.This guide will show you how to do just that.

The Causes to Your Defensive Problems

No matter how good your tactic might be, without the quality of talented defenders in your team and all you have are your nearly worthless blokes at the back,you can't be expecting your team to not let goals in.

If your defense can't even communicate and work with each other,how do you expect them to put in a sturdy performance?

Is your keeper good enough? He's a very important member of the defence so it would be best if you have a goalie who wouldn't lose his concentration easily and can be relied on.

Sometimes,it might just be your opposition being vastly superior and launching countless waves of attacks,nothing you could really do except adding more men back to withstand the pressure.

If your team aren't that good at holding up the ball and keeping possession,it's highly advisable that you should not take risks by putting more men forward as you might be dispossessed and be hit on a counter attack.

While having a good tactic would help your team in many ways, results aren't only dependent on your tactic,there's something else that is necessary for leading your team to success : your players.

First and foremost importantly,the player that can prove the difference between winning and losing : the goalkeeper.

To be fair,a good goalie needs to handle pressure well,and thus,mental attributes are exceptionally crucial,so are their technical attributes,which will help determine how well they deal with balls and dangerous moves.

If you're a mid table club and are not that rich,you could target some of these goalkeepers : Bartlomiej Dragowski from Jagiellonia,Camilo Vargas from Atletico Nacional and Lovre Kalinic from Hajduk Split.There are still plenty more talented goalkeepers in game so you'll be spoilt for choice when picking your No.1 in the market.

With this part finished,let us move to the next segment,where it brings us to the back line..

Without much needed to be said,the back line ,if somewhat a no-brainer,is the spine of a solid defense.With this in mind,you'll probably be wandering around in the market,searching for a new centre back,as you know that the current defenders in your team are starting to deteriorate and their abilities from when they were still young are long gone…

But,what kind of centre back are you exactly looking for… ?

Before that,the table below indicates the primary and secondary attributes required for each central defender role : 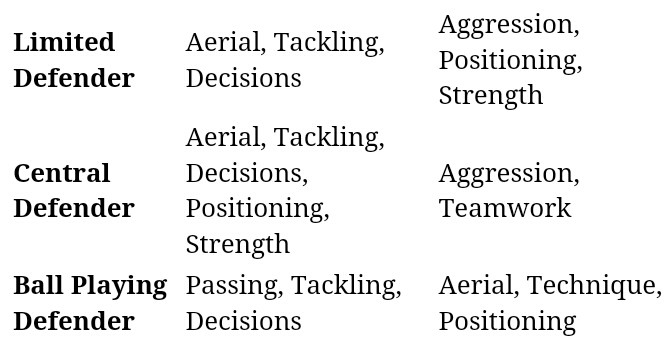 It's best if you buy a central defender who is strong in the air (15+ Aerial) and also possesses good technical skills (10+ Dribbling & Passing) and is quick (10+ Pace).

If you have defenders who aren't great technically,using them as LIDs’ would do just fine,as their main ‘mission’ is to clear the ball out of danger in a no-nonsense matter.

Here are some centre backs to consider if you're short on cash: 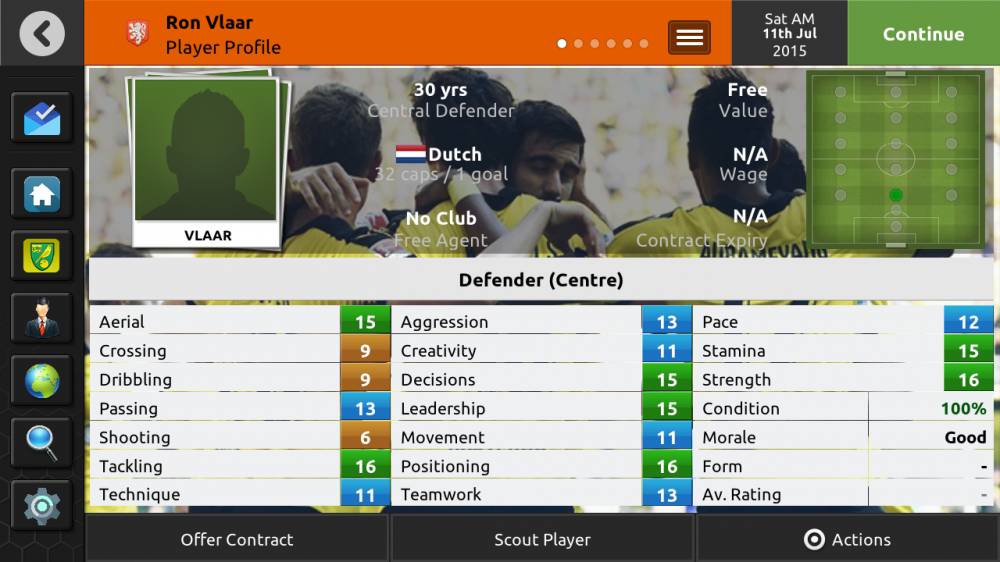 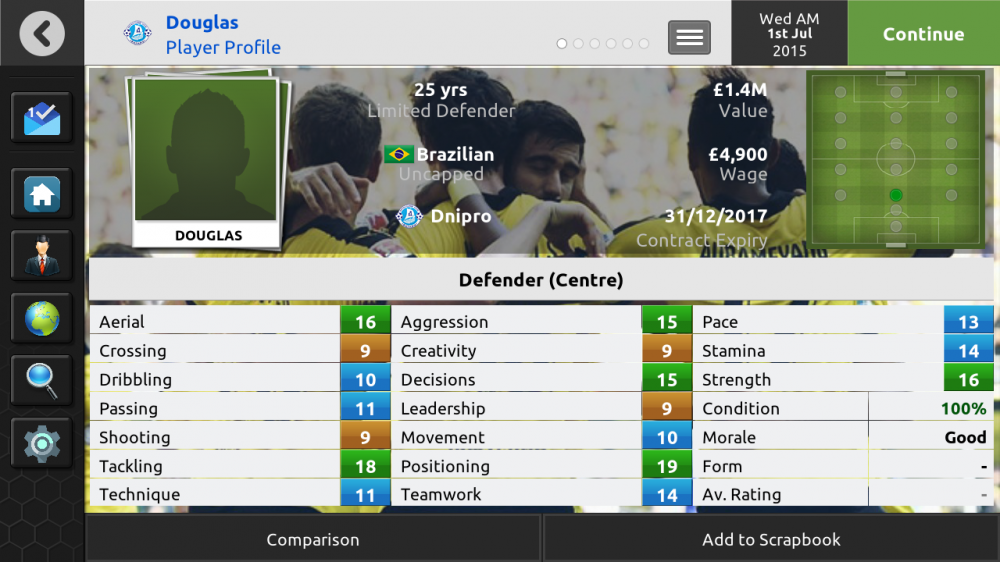 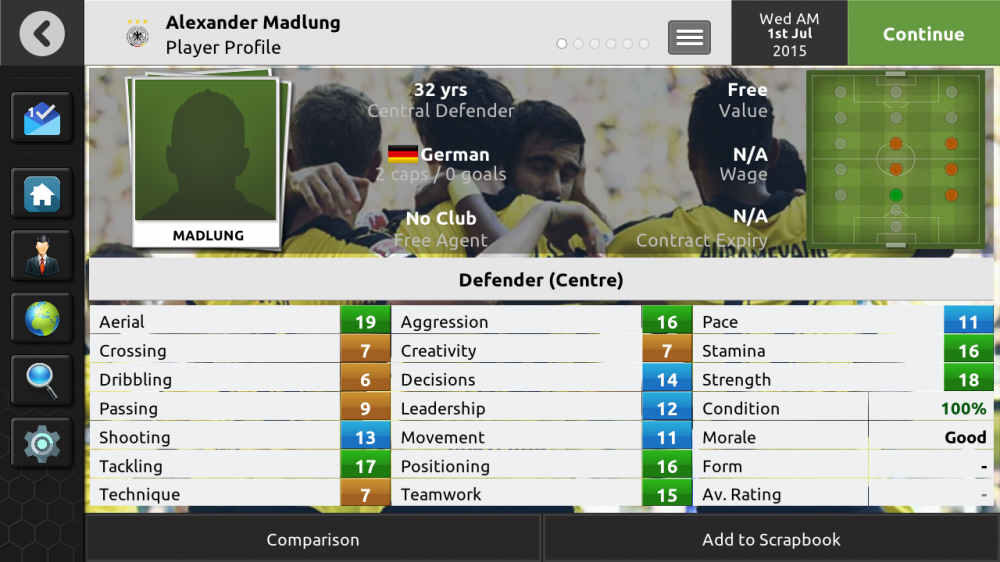 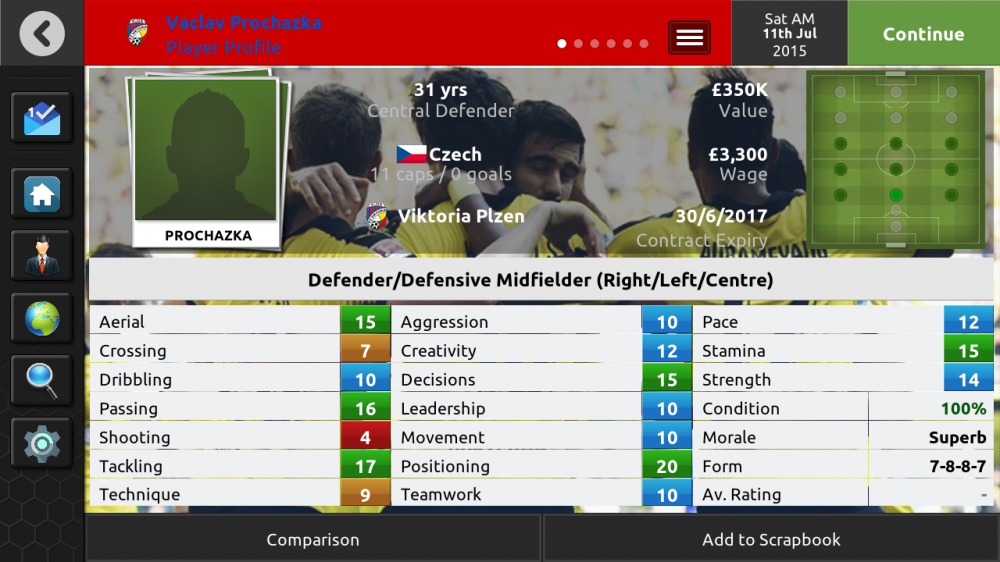 It's best if you have strong and quick full backs too as they will help a lot defensively and offensively,but they require high work rate and pace to run up and down the flank.

The attributes needed for a quality full back :

Building the defence isn't just about the back four,you'll need a shielding midfielder to operate in front of your 2 centre backs.

The player in front of the back two would need to be a strong anchorman who has the ability to protect the backline and win balls and send them upfield.

The attributes required for a good Ball Winning Midfielder :

A few BWMs’ who I recommend you to sign if you have the money : 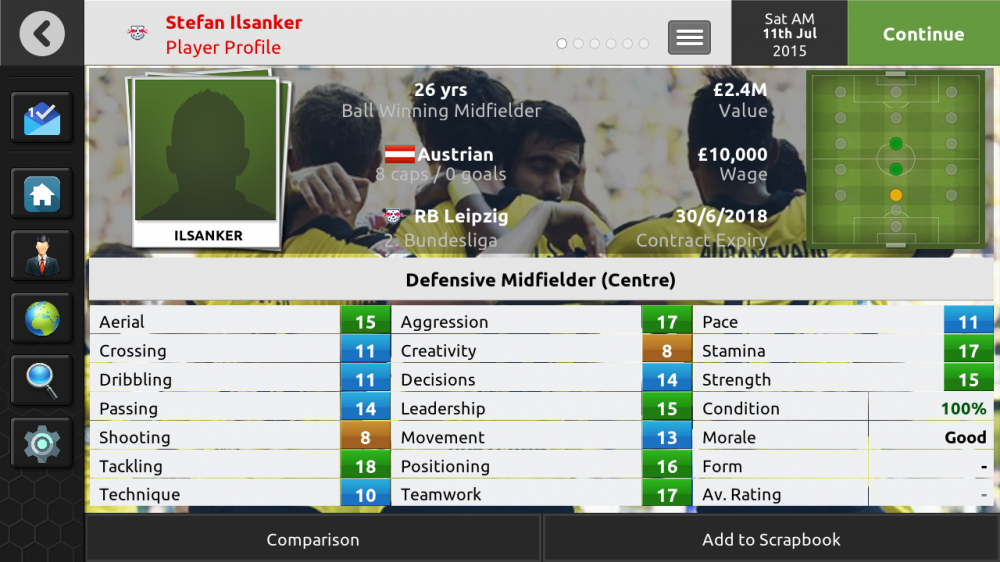 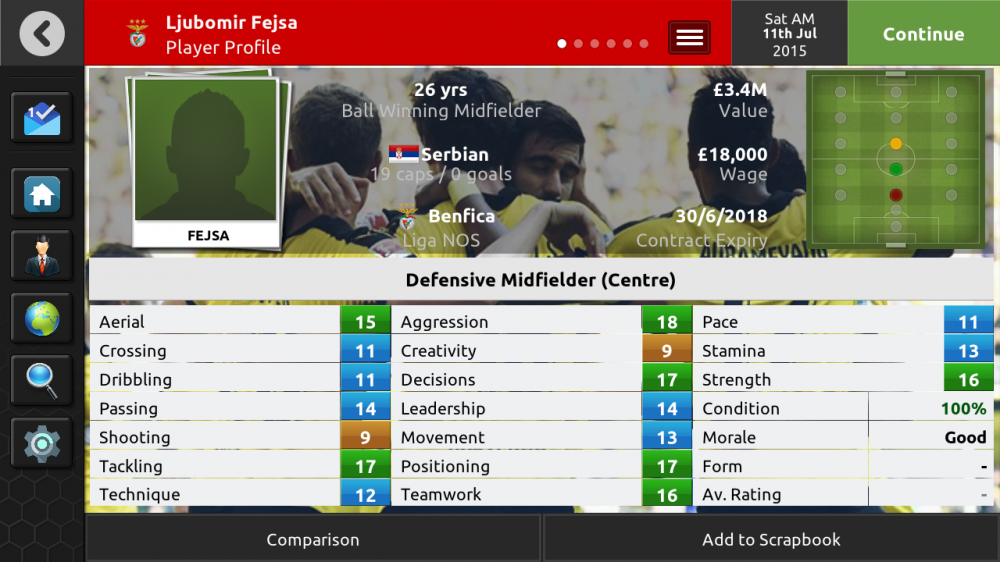 How You Should Set Up Your Tactic For it To Work

With the team being built,you should now focus on the tactical instructions.

As a general rule of thumb,you should always have 5 or more defensive minded players in your lineup (4 defenders and 1 DMC) so your team would be more stable.

Now let's focus on the formation,take a 41131 as example,you'll have a standard back four,with a DC pairing which I'll explain below,and 2 full backs and a BWM in front of the back two.This formation is very solid as it dominates the midfield and therefore reduce stress and pressure on the defence. 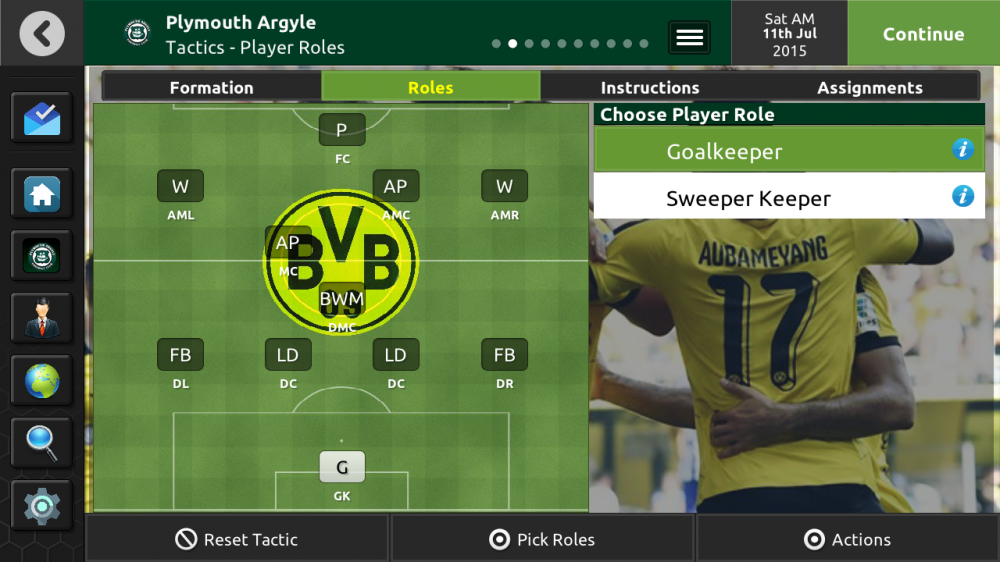 A 5 man defense with a BWM in the DMC slot to provide protection to the back line.

The following are the 3 different centre back roles and 6 different pairings and how they would work :

Limited Defenders -  Your typical English defender,as aforementioned,their only tasks are to get rid of danger inside the box as efficient as possible. A suitable role for less technically gifted players.

Central Defender - A normal central defender. He can read the situation correctly and will try not to overcomplicate his moves and try to play the ball to safety.

Ball Playing Defender - Ball playing defenders usually take more risks when playing the ball,they would usually advance a slightly further up the pitch,out of their comfort zones to initiate attacking moves,as a result,if they lack mental attributes,they are very prone to mistakes.

Of the 3 roles,there's a total of 6 different pairings.However,they're all very similar,just a few little variations.

For instance,the Bpd/Bpd,Cd/Cd & Lid/Lid partnerships are vaguely similar,the only difference are their playing styles,the BPDs’ would be more attacking whereas the LIDs’ would stay put and only advance up the field during set plays.

Now,onto the pairings of the Ball Playing Defender and Central Defender/Limited Defender.This is a very effective and dangerous partnership as the presence of a Cd/Lid would provide more freedom for the Bpd to roam upfield and take more risks without exposing the defence to the opposition.

The pairing of the Cd/Lid are best suited for a more defensive style of play as both defenders wouldn't take as many risks.

A Sweeper,also known as Libero,is a player who plays behind the centre backs and just like his name suggests,he would sweep up the through balls that went past the centre backs and will play the ball back to the defenders in front of him.He can provide extra cover,acting as the last line of outfield players. 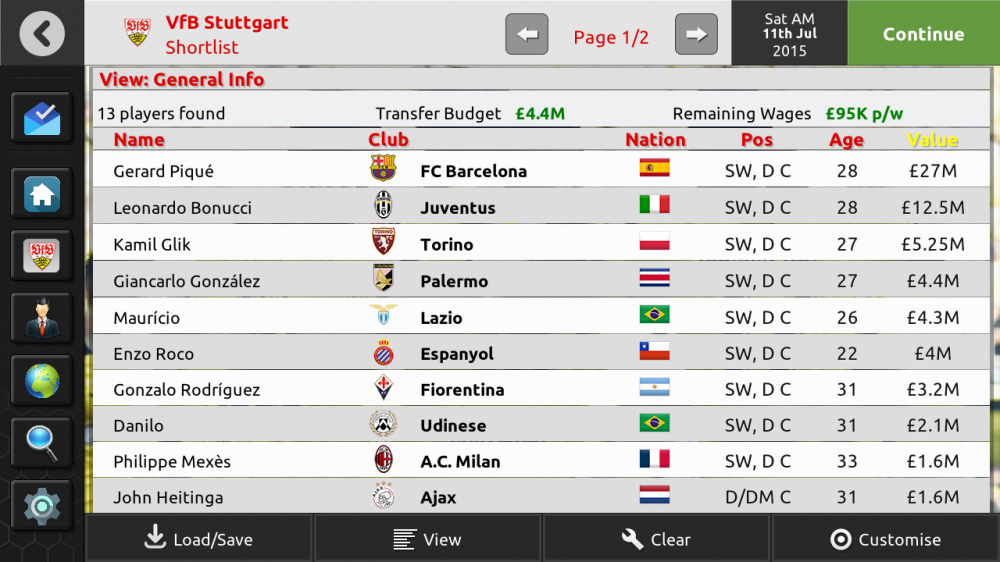 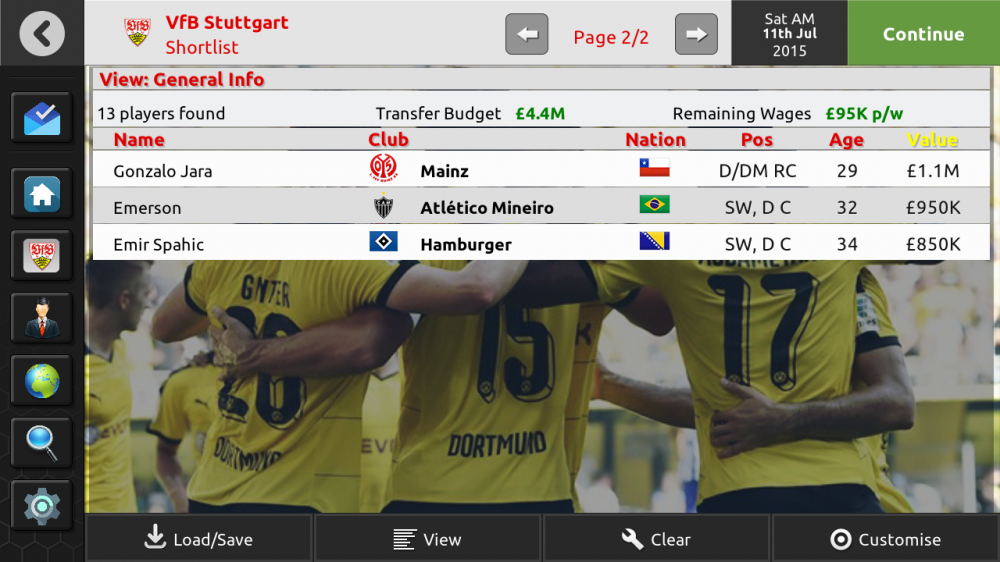 A little advice,when you're leading 1 or 2-0,try to fiddle with the mentalities,turn ‘Defensive’ and play ‘Direct’ passing,switch on Counter Attack & Men Behind Ball,as your team will sit back to defend the lead and hit a counter attack when there's an opportunity.

Hitting Them on the Counter

It's best if you have quick players,most preferably wingers with good crossing and dribbling,because you'll often need speedy players to launch counter attacks,having at least 2 of those kind of players would benefit your team a lot.

You Can't Play 3 At the Back

Don't and I mean it,ever play a 3 man defense,although it's very effective if you have pacy wing backs and can dominate the midfield easily,the compact back line can cause your defence to be teared apart by the opposition’s wingers and it can cause your team to be exposed very easily

Playing Defensive Wingers or Wide Midfielders would help your full backs and would be beneficial to your team defensively.

While this guide might not help you all the way,it does gives you a definite source of help for everyone and I hope you like it