A.C. Milan is a club with a rich history and it’s one of the most successful club in Italy and Europe. It was founded on 16  December 1899 but in 1908 the team was split into two due to an internal disagreement over the signing of foreign players and F.C. Internazionale Milano was founded. 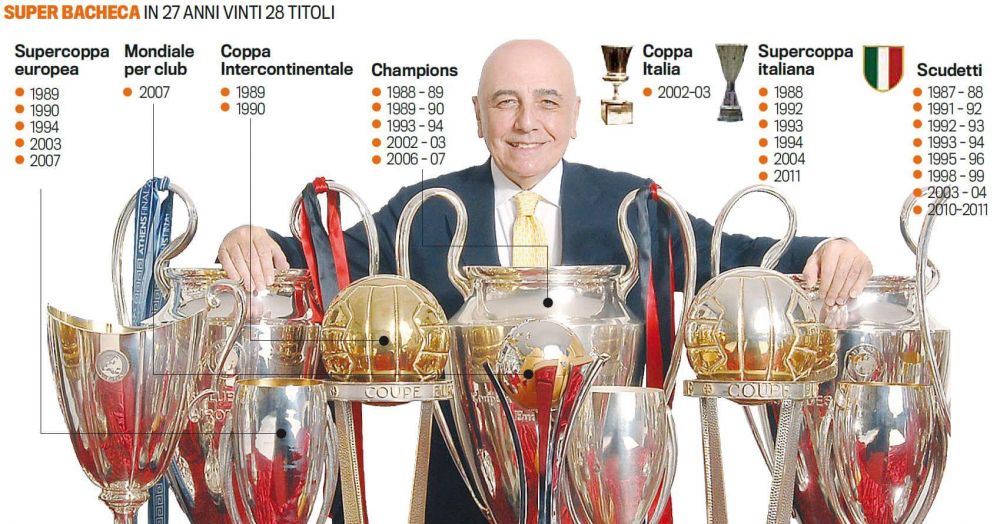 The club has won a huge amount of trophies and it is the third most successful club in Europe - but like every club - it had its dark period. In the 1980/81 season they were relegated to Serie B due to a betting scandal. Despite making an immediate return to Serie A, they recorded their worse season and were relegated again. During this period of crisis, the president, Silvio Berlusconi, bought the club and created a project to return Milan to the top of Italian and European football.
In total, the team has won three Intercontinental Cups, seven Champions Leagues, five Super Cups, one Club World Club, 18 league titles, five Italian cups, six Italian Super Cups. They’ve won every European competition bar the Europa League. 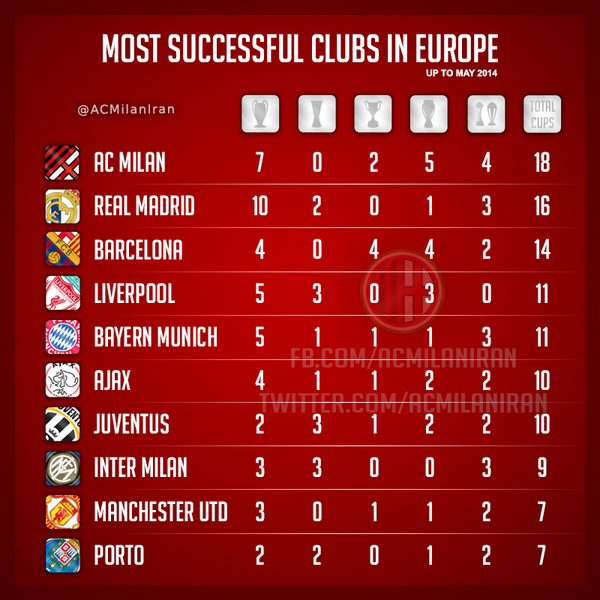 Now the big question: why manage Milan?
Well the answer is quite easy, when you talk about fallen giants, they are topping the list. How is it that the third best club in European history hasn’t qualified for any continental football in the last three seasons, having finished 8th, 10th and 7th over the last three seasons?
Your job is just one: take Milan back to their former glory. You’ve got all it takes to do it. It’s got the biggest stadium in the league (80,018 capacity), the best training facilities and even the players to do so.
Squad
This is not a squad guide so I won’t be going into detail with the players; I will only point out some important players of the squad you can build around and when the game comes out I’d be doing a proper guide.
So let’s meet the players: 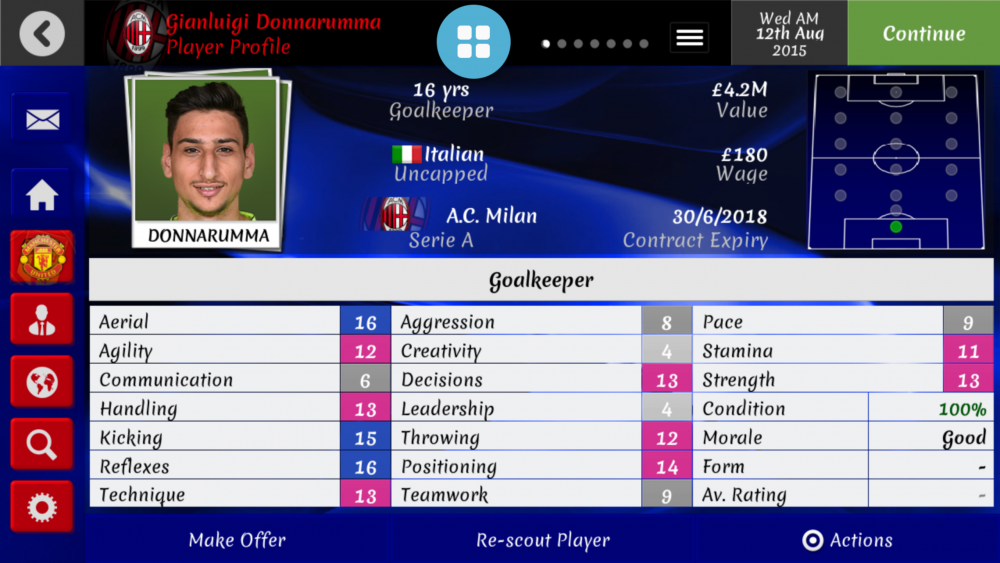 When you talk about the future of A.C. Milan and the Italian  team you must talk about this guy. At only 16 years old he took the place of Diego Lopez in the first team. He’s got lots of years ahead of him so he has time to become one of the best goalkeepers in the game. You can see his stats above from FMM16 and, hopefully, he will see an upgrade in this year’s game - and he should experience one too. 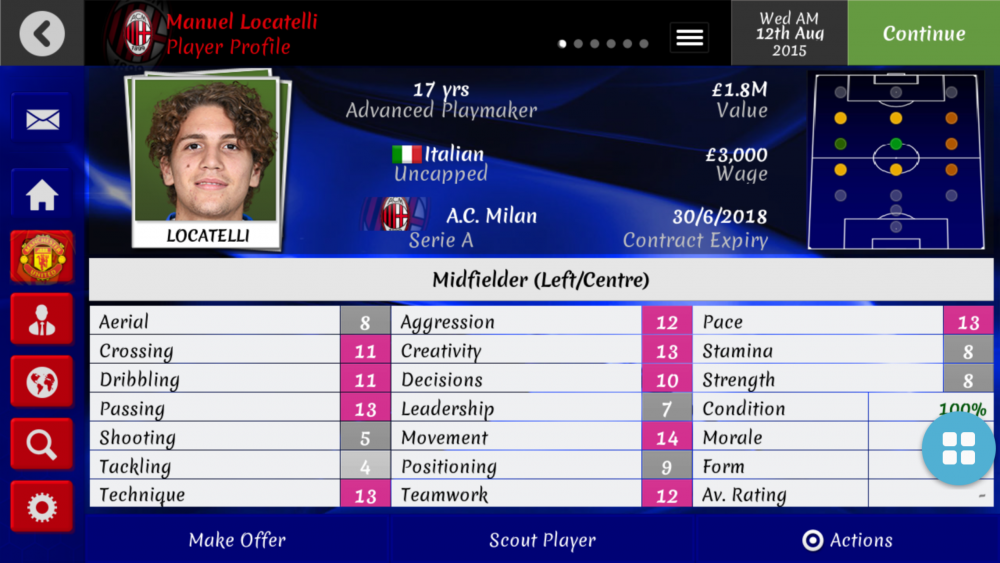 18 years old with lots of potential, he made his debut on 21st April 2016, replacing Andrea Poli on the 87 minute and on 14 May he made his debut as a starter. He scored his first ever goal for the club with his first ever shot in the league, making it 2-2 for Milan before they grabbed a late winner. He has replaced Montolivo in the first team due to the Italian’s injury but he further strenghened his long-term starting place with his winner against Juventus in October 2016. Like Donnarumma, I think his stats should be upgraded a little. 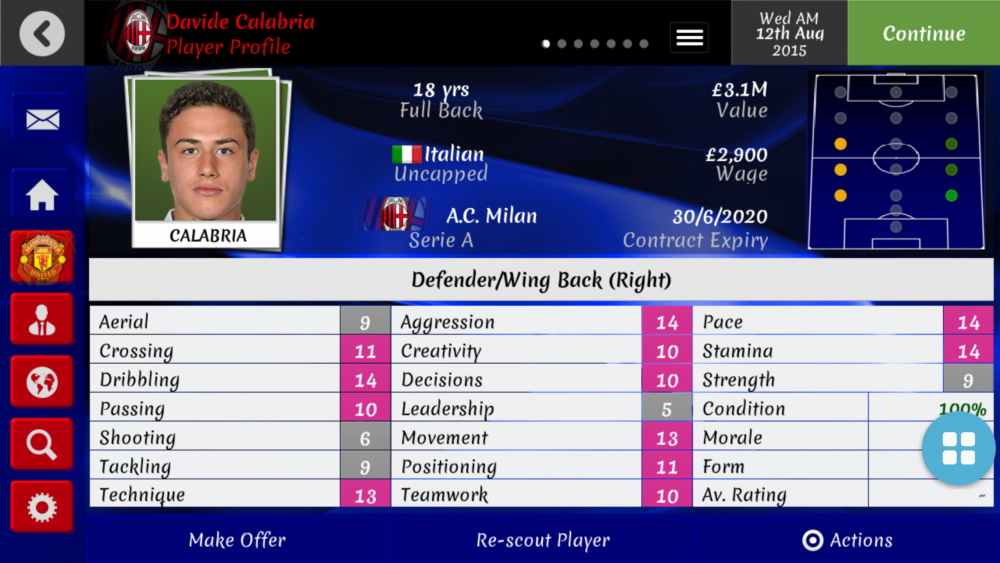 Another young player with potential. He has played 4 times this season and he has done pretty well. Looking at his stats at the moment they don’t look fantastic but below is a screenshot of after five seasons. 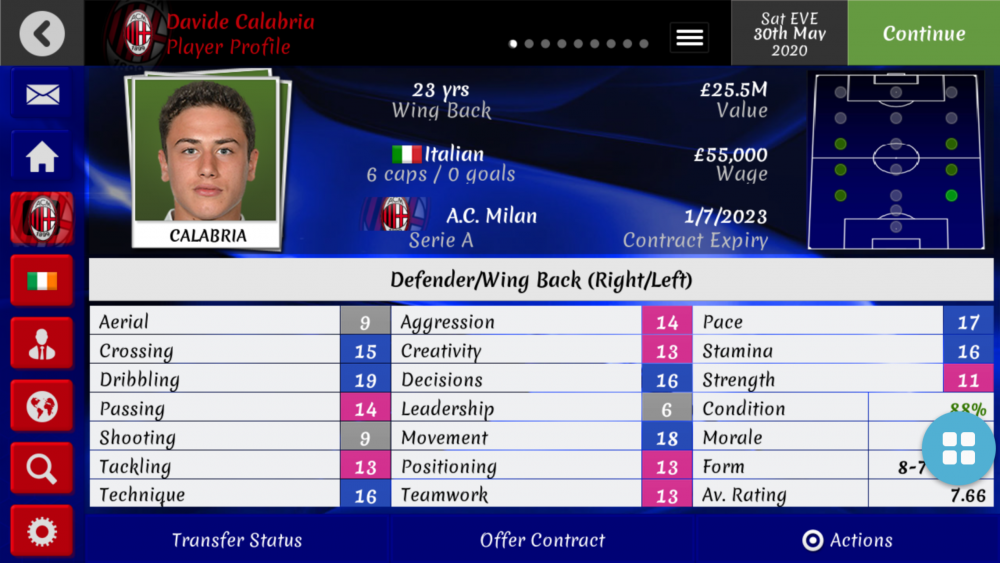 These are the 4 youngest players of the team you could look to build the squad around. Obviously there are others like Alessio Romagnoli, José Mauri, Mattia De Sciglio, Gustavo Gomez. Their stats from FMM16 are below (in the comment section due to file size).

So here’s the squad and let’s not forget you’d have Bacca and Niang as strikers.

I hope, after reading this post, you’ve found a strong reason to manage Milan. in real life they are currently third under their new manager, Vincenzo Montella, so if he’s getting the job done with the squad, why can’t you?