The Championship – one of the most exciting, popular and well-supported leagues in Europe, if not the world. But who is it that makes the Championship so exciting? That’s right, the players. And with former FMM Championship favourites such as Jordan Rhodes, Lewis Cook, Michael Keane, Andre Gray and Andrew Robertson moving on, it’s time to look at some of the new hot property in the division. Kicking off the series, it’s the men between the sticks.

The Championship has been blessed with a number of great goalkeepers – below we take a look at some of the stand out candidates from the division. 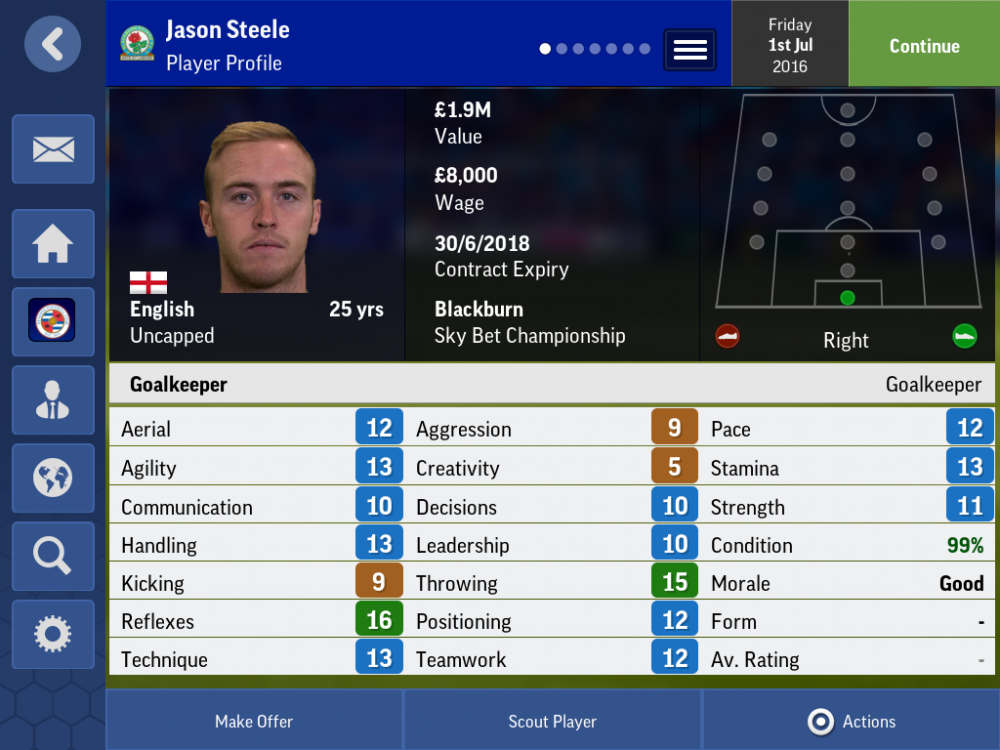 Somewhat underrated, and at just 25, Steele is young enough to develop further. His strength lies in his reflexes and throwing, 16 and 15 respectively at the start of the game, while his agility, handling, technique and stamina are not to be sniffed at at 13. His kicking, decisions and communication leave a little to be desired, but valued at £1.9million he could be a good option for back-up job in the Premier League. 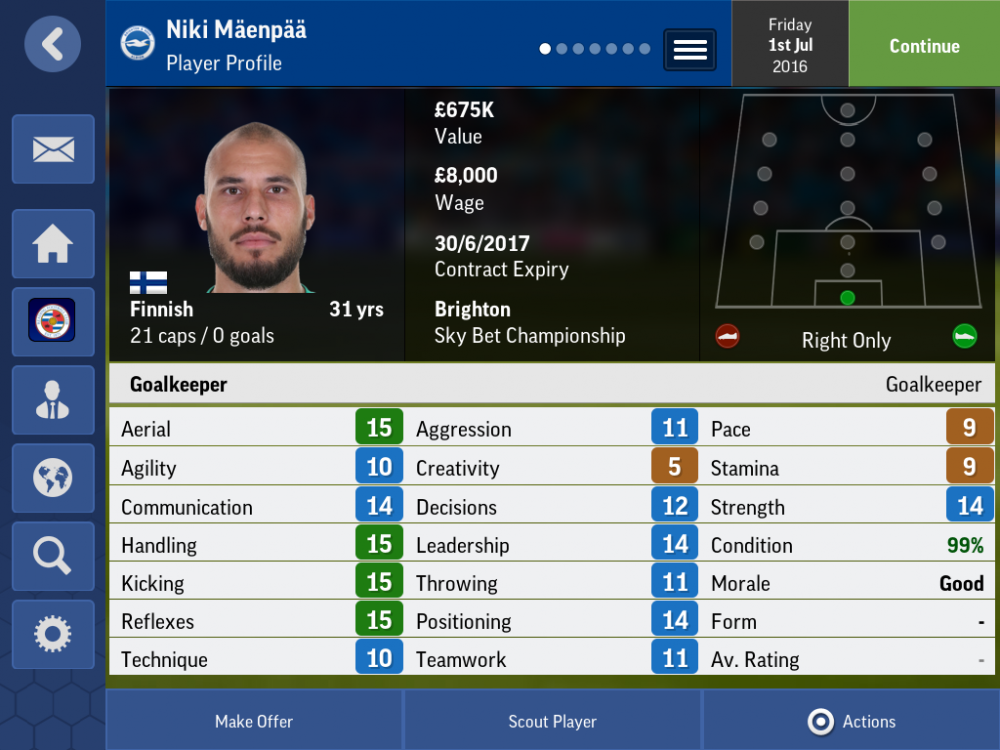 Brighton signed Finnish international Niki Maenpaa from Dutch side VVV-Venlo in 2015, and since then he has played as backup to David Stockdale. The 31 year old boasts impressive aerial ability, along with handling, kicking and reflexes, while his positioning, strength and communication are not far behind. Valued at just £675k, Maenpaa is something of a bargain. 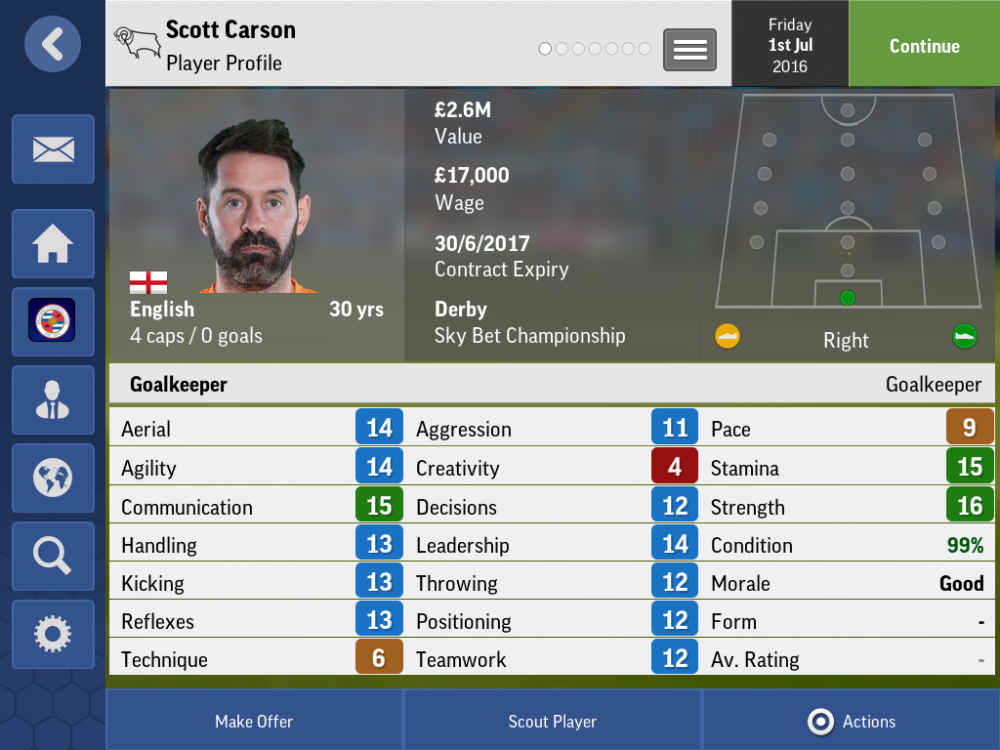 Former England international Scott Carson still has enough in the tank to make this list. Aged just 30 (I know, I thought he was older too!), and valued at £2.6million, Carson has solid stats across the board which can increase with the right training. Stamina, strength and communication are his key attributes, however his low technique does offer a little worry. Possibly not the strongest candidate on this list, but maybe worth a punt if you are running out of time in the transfer window. 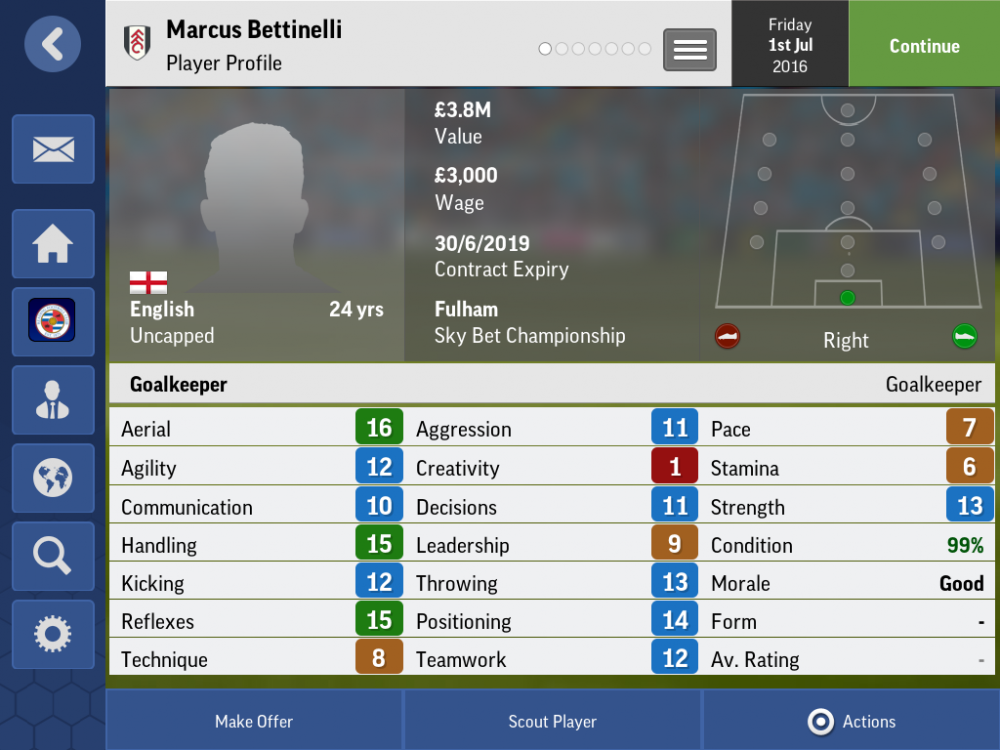 The first of two Fulham goalkeepers on the list, England under-21 international Marcus Bettinelli has a bright future in the game. At the higher end of the pricing scale at £3.8million, his 16 in aerial ability and 15 in both handling and reflexes, as well as his young age, go some way towards justifying his price. His technique and stamina need improvement, but don’t be surprised if he moves on quickly to a bigger club – snap him up if you want him! 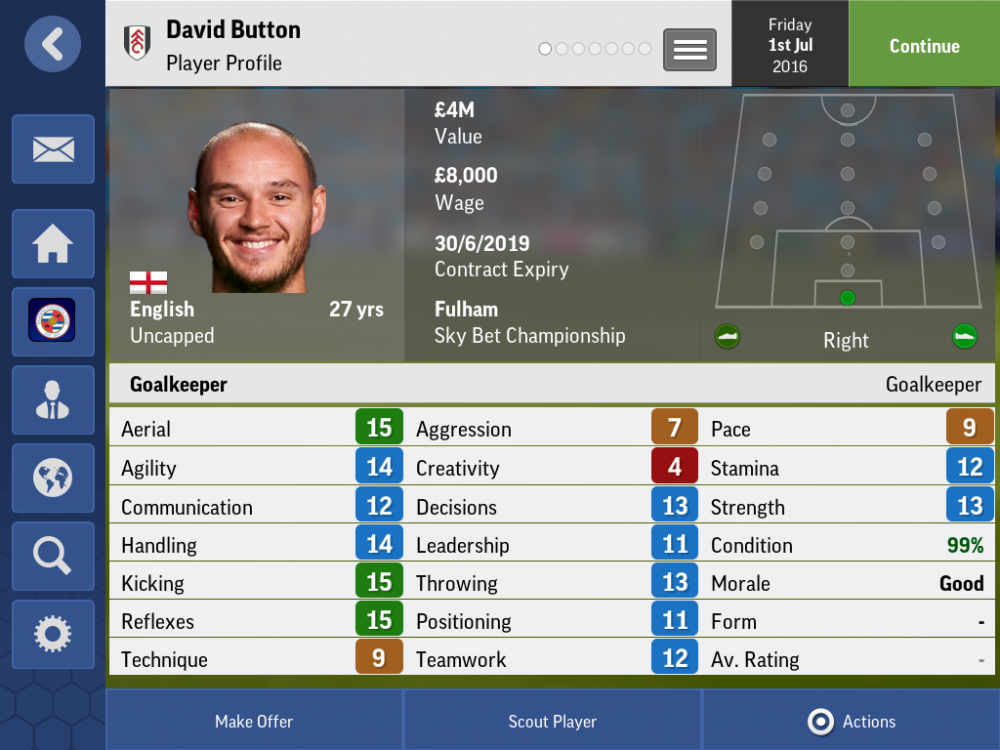 Fulham’s second goalkeeper on the list, David Button joined the club from local rivals Brentford in the summer. Another with solid stats in most areas, his kicking, aerial ability and reflexes are his key areas at 15, with agility and handling both sitting at 14. Valued at £4million, he is quite expensive, but with both him and Bettinelli both on the books, you might be able to pry one of them away for not much more than their asking price. 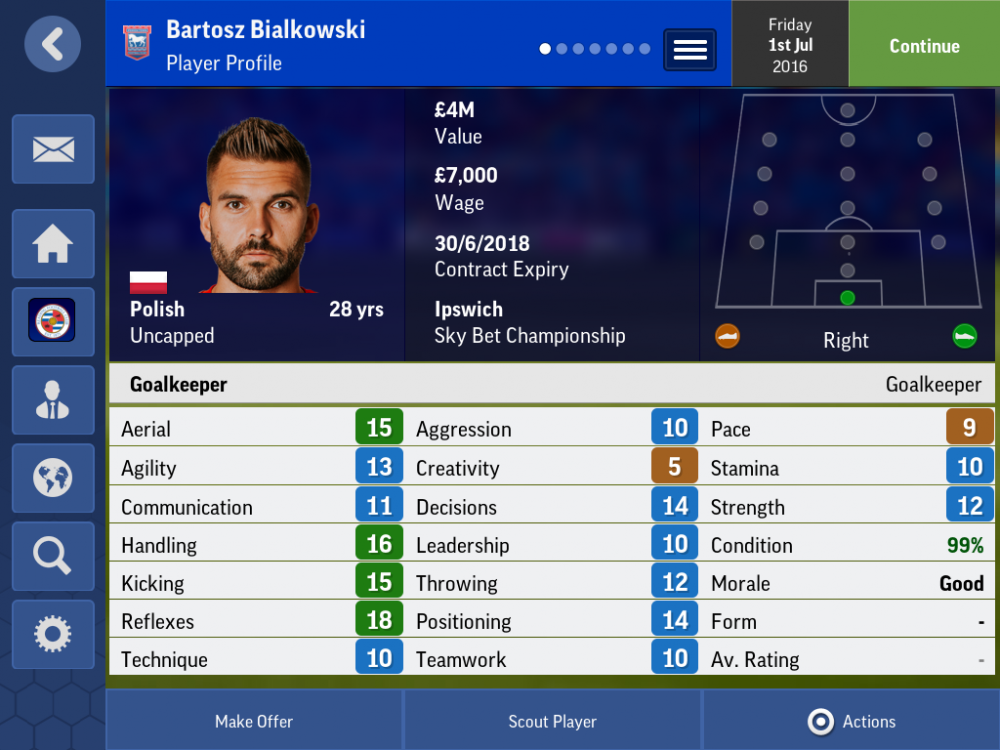 Bartosz Bialkowski is another one on the list who is fairly expensive, but again he can justify it. He has shared starting duties at Portman Road with Dean Gerken for the past few seasons, but seems to have made the number one job his own. His reflex score of 18 is fantastic, while his 16 in handling and 15 in both kicking and aerial ability make him a good option for most Premier League sides. At age 28, he still has plenty of time in the game to come. 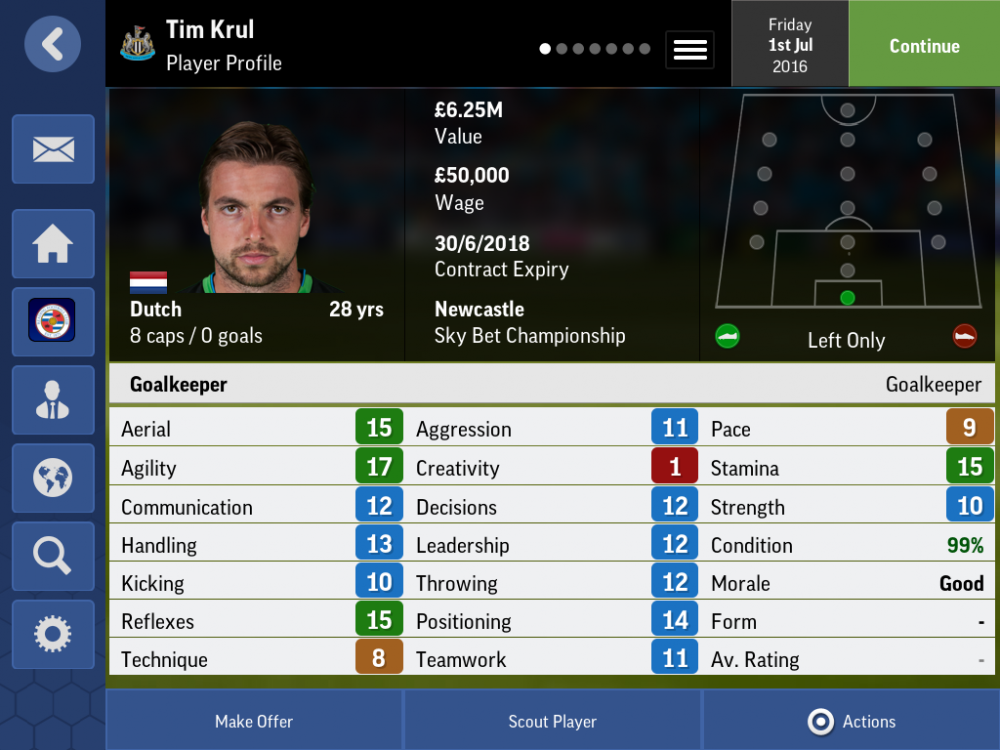 The only goalkeeper on this list who was playing Premier League football last season, Tim Krul needs little introduction. His strength lies in his aerial ability, agility, reflexes and stamina, but I’d have to say that his skills don’t justify his price tag of £6.25million. He is, however, a Dutch international goalkeeper, and Newcastle have both Matz Sels and Karl Darlow on their books so picking him up for not much more than the asking price is a possibility. 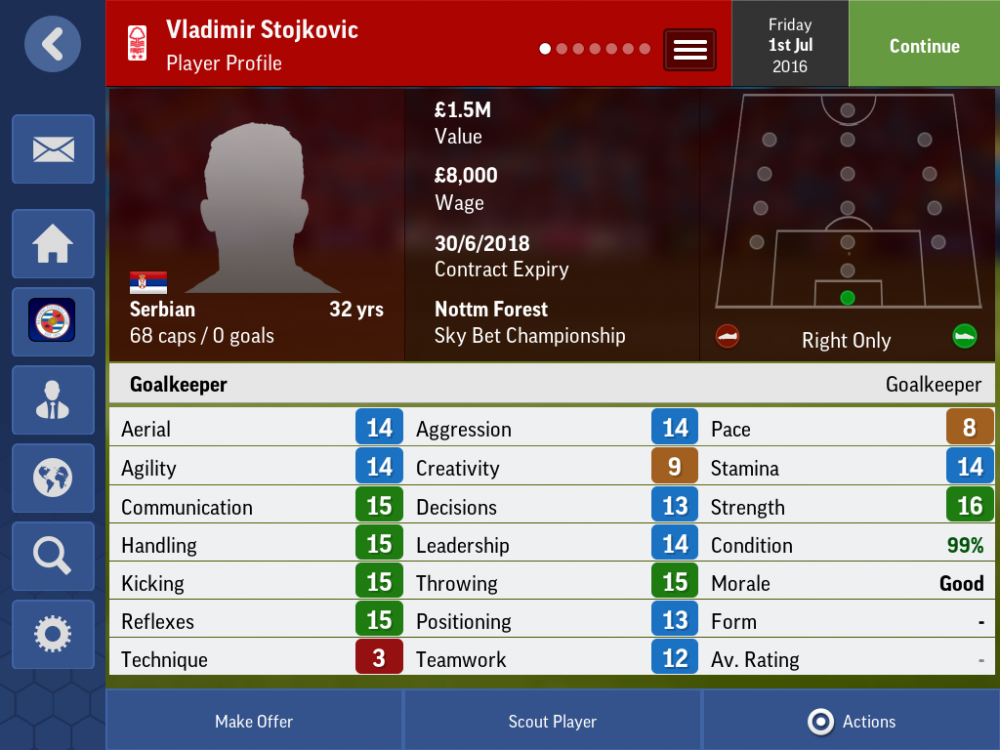 One of, if not my favourite goalkeeper on this list, is Vladimir Stojkovic. Nottingham Forest signed the Serbia number one in the summer, who counts Sporting Lisbon, Maccabi Haifa, and, erm, Wigan Athletic amongst his former clubs. Factors in favour of signing him - a low asking price of £1.5million and highly impressive stats across the board. Factors against signing him – his age (he turns 33 less than a month after the start of the save) and his, and Forest’s, reluctance to sell, which could bump his price up. 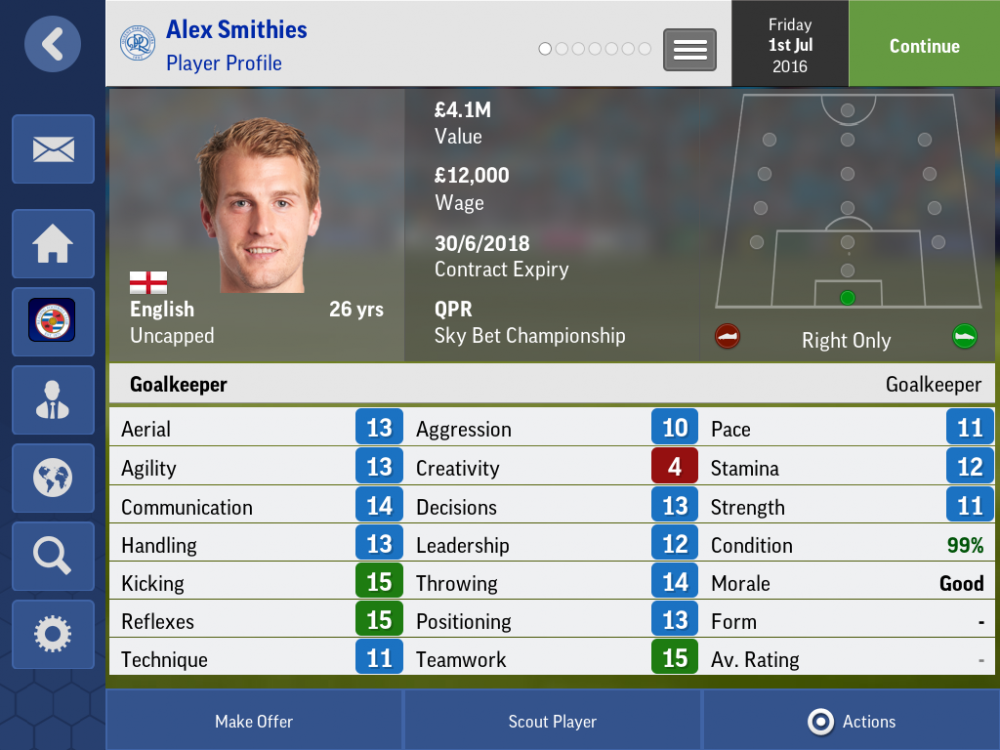 Alex Smithies is already something of a FMM favourite, but he is still worth a mention here. The former Huddersfield goalkeeper boasts scores of 15 in kicking, reflexes and teamwork, while his only score under 10 is in creativity (which I personally don’t see as that important in a goalkeeper). However, he is valued at £4.1million, and is only aged 26, and so QPR may be reluctant to let him go. 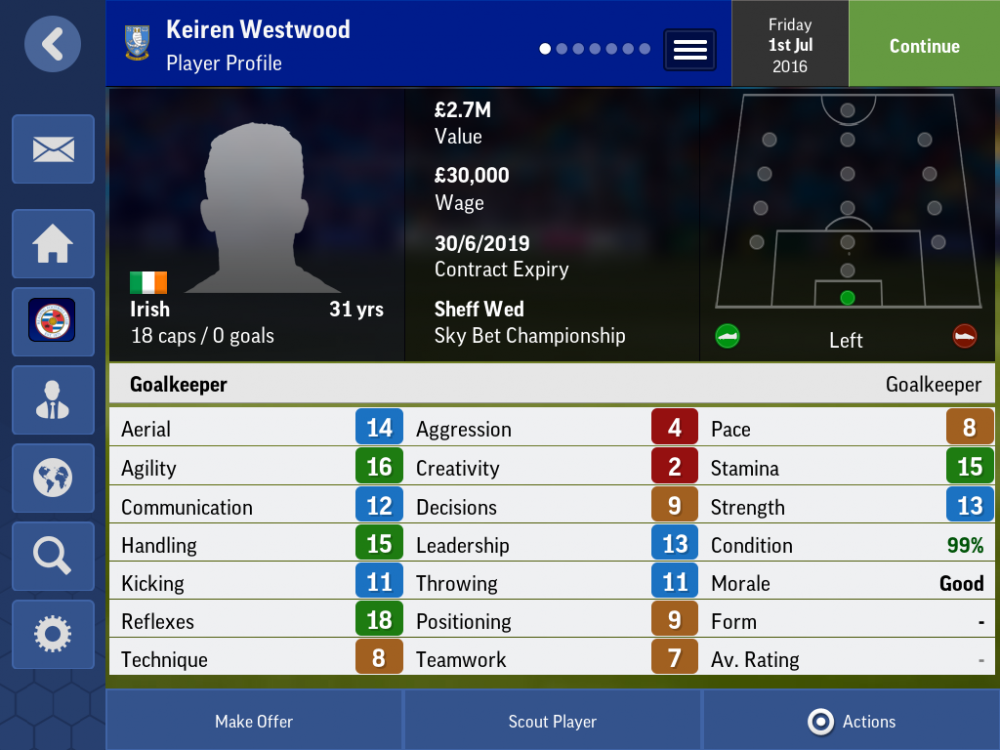 The final goalkeeper on this list is another FMM favourite – Keiren Westwood. The Sheffield Wednesday goalkeeper is now 31, but has 18 Ireland caps to his name and comes with a relatively mid-range asking price of £2.7million.Westwood is an all-or-nothing style goalkeeper – he excels at agility, handling, reflexes and stamina, but lacks massively in technique, positioning, teamwork and decisions, among others. Could you do better? Probably. Could you do worse? Almost definitely.

Do any of the above take your fancy? Is there anyone I've missed off the list, or someone who doesn't deserve to be there? Let me know!