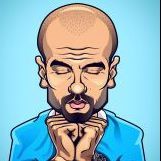 Hi @Nick11, how about something like bringing a youth into your side each season and try and make him a star, then sell him after each season, any position, just has to be played as much as possible,