Hello everybody and welcome to this new article. Today, we are going over the England U-20 squad, looking at the players and their potential.

Well, it's a good question. The fact is, this is the first international final that any England squad of any age has reached since that famous win in 1966. These young lions are the future of English football (after Rashford of course

) and deserve their spot in an article.

So, let's get into the good stuff, shall we?

Note: not all players will be in the game Database, so only those in it will be run through. 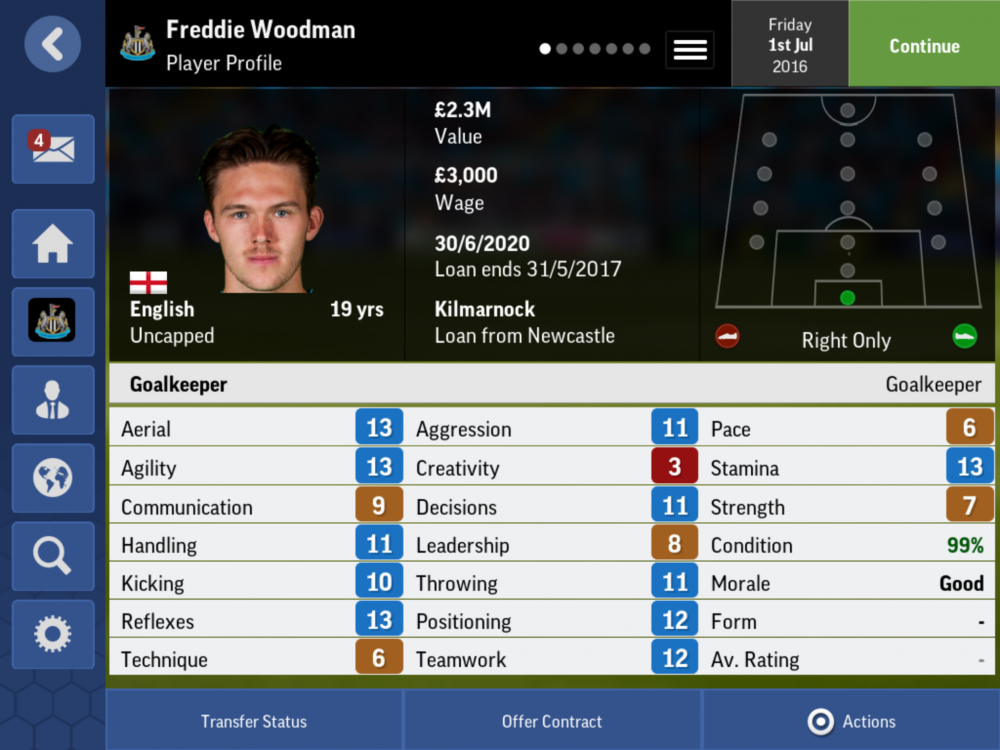 Woodman is one of Newcastle's finest young stars, starting the game at the age of just 19. At first glance, Woodman doesn't look too impressive, with just 13 in reflexes and 11 in handling. However, with 14-15 years of service in his locker, aswell as a highly likely chance of hitting greens within season 1, Woodman could become a must in your team. His U-20 WC campaign has been impressive, making 15 stops so far and holding a 88% save rate, aswell as 3 clean sheets. With figures and attributes like these at such a young age, can he be your main man between the sticks? 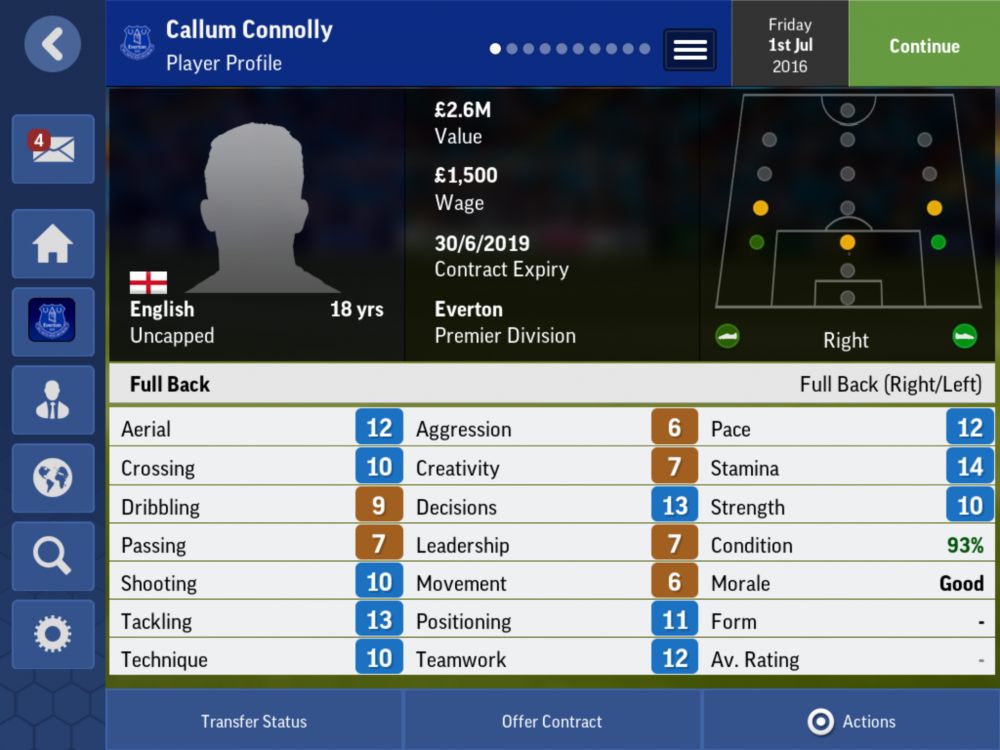 Another player with average stats at best in-game, Connolly is one of those that can easily fill a spot if needed for the first few years, before making it his own. With over 3 caps already under his belt plus the amount of games played at the World Cup, Connolly is fast becoming a prospect at Goodison Park. In-game, he could last maybe 10-12 years before needing to be replaces, and his versatility and decent physicals make him a decent Championship player for the first year, but much more after that? 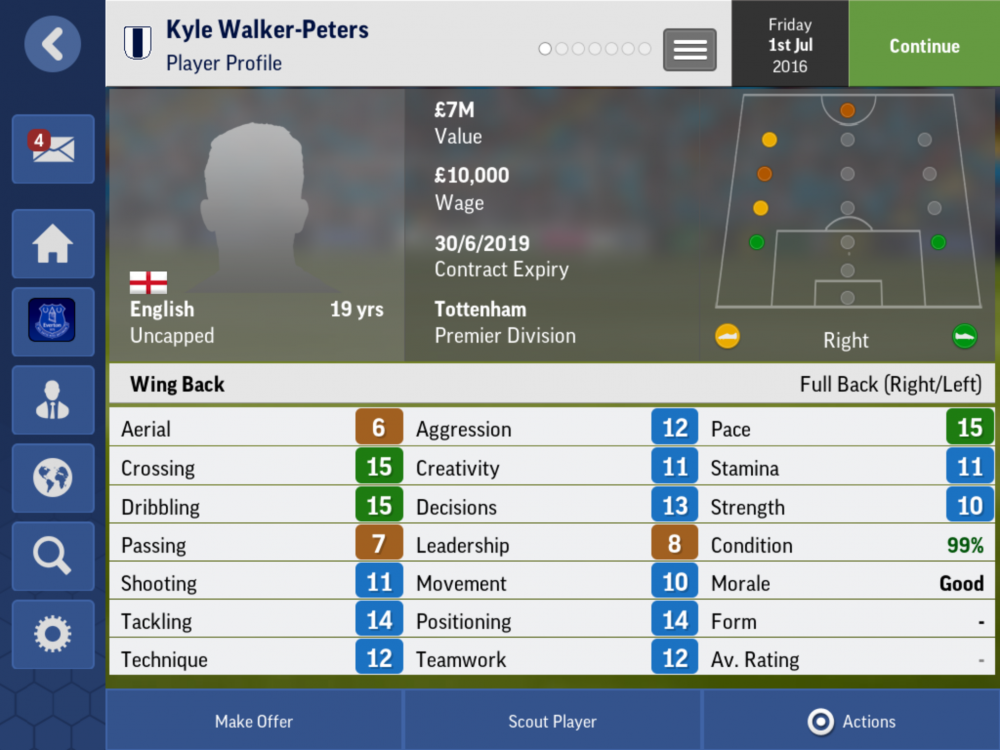 Somehow having no Wiki page is Walker-Peters, who has potentially the most promising stats of all the defenders. His superb greens for Crossing, Dribbling and Pace make him the perfect attacking full-back, even at the young age of 19. Peters serve a good 12 years for you, bombing down either the right or left sides and injecting fear into the opposition. Good enough to slot into any system in the EPL, can he fit into your system? 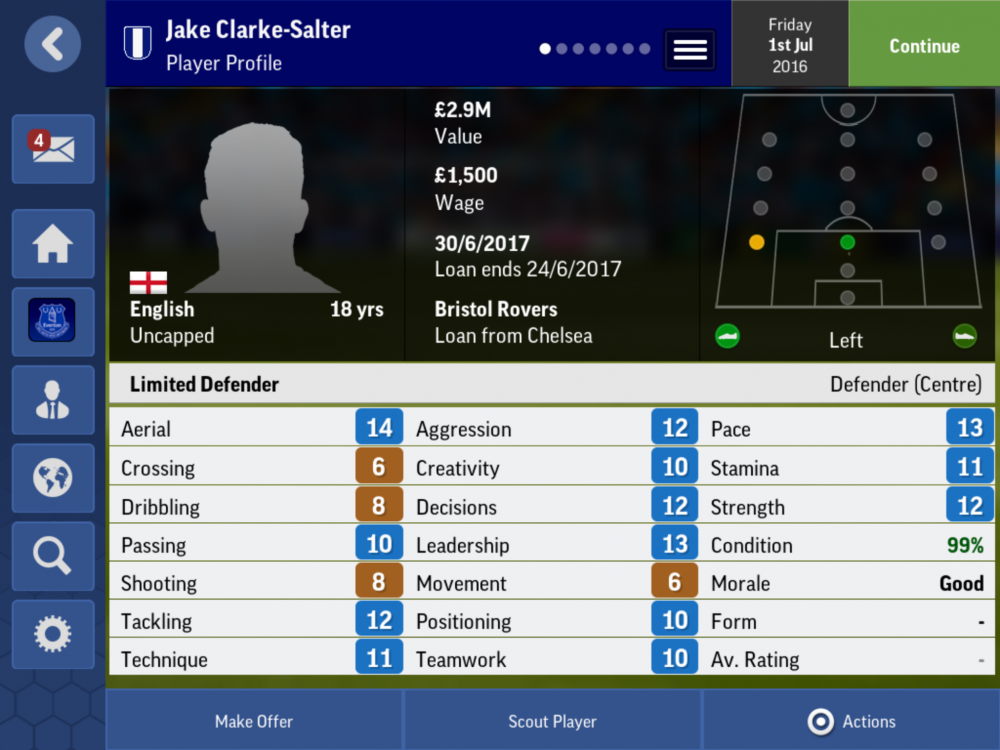 Salter-Clarke is a decent looking Centre Back at the start of the game, having such stats as 14 aerial, 12 Tackling and 13 leadership and pace. He was even referred to as the successor of John Terry, by JT himself! Clarke can turn into a beast in the heart of your defence with the right training and game time, and could last 15 years before you have to consider getting a replacement. His contribution to the World Cup has been brilliant, playing 3 times and gaining 3 assists. If you need a solid Englishman for when Brexit comes along, he is your man. 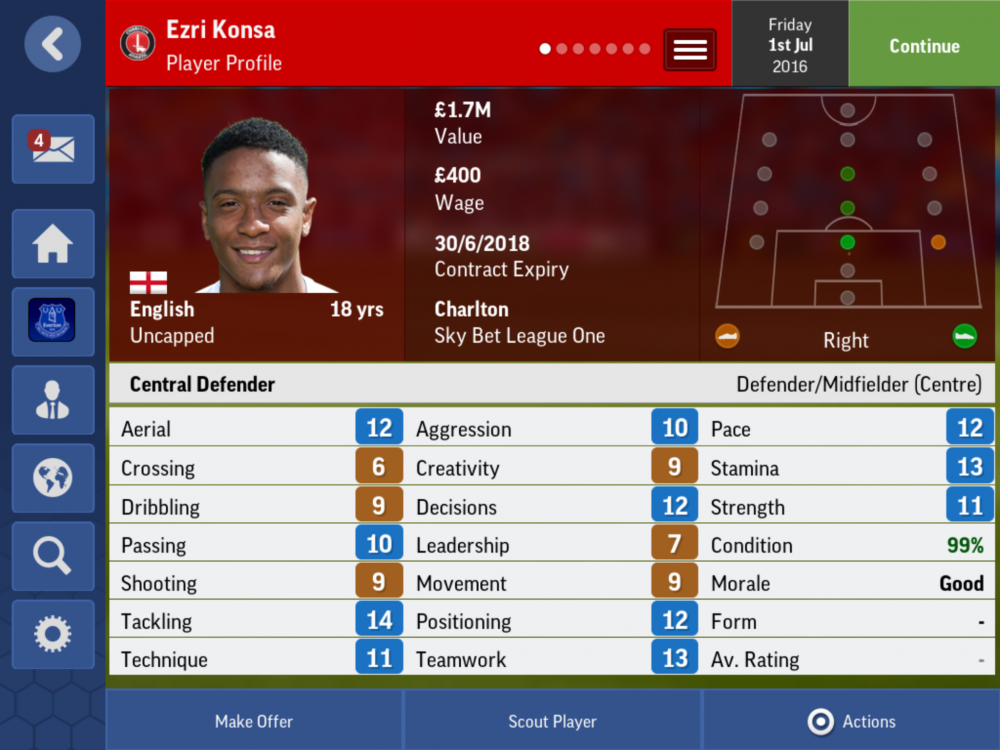 I haven't been able to confirm the amount of call ups Konsa has, but with stats like that I'm sure he will gain many more. Konsa currently possesses great stats for an 18 Year old, including 14 Tackling, 13 Stamina and 12 Aerial. Accompany this with the fact he can play as a CDM/CM, and he is the perfect player. Not one many have heard of, Konsa could definitely see a move to the PL on the cards soon if he continues this development. 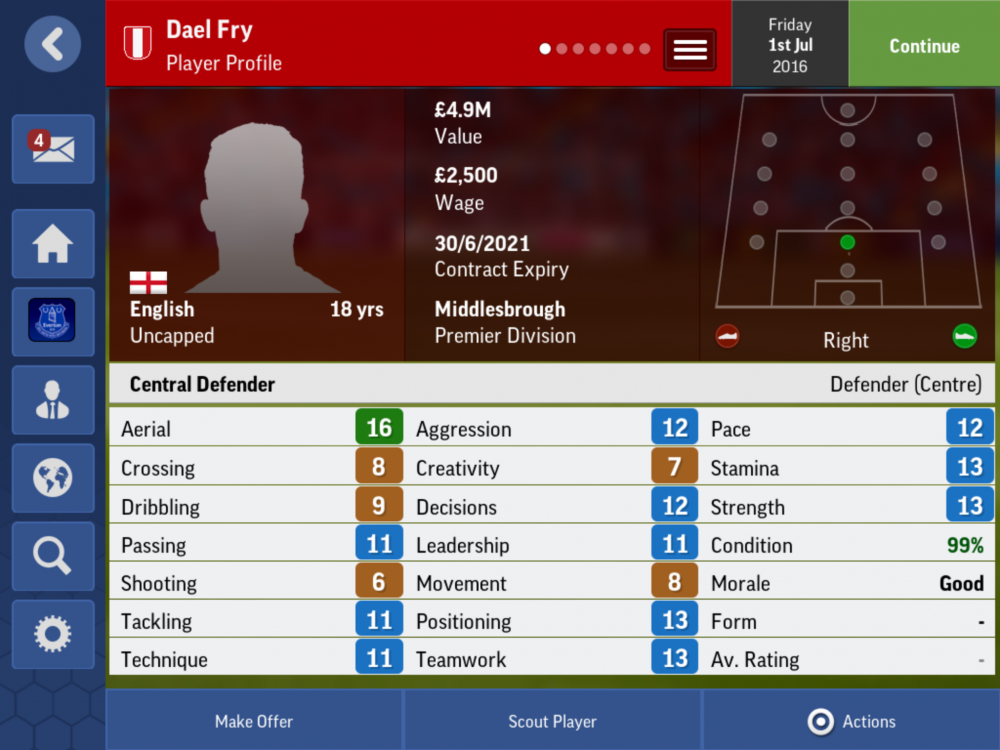 Fry was part of the relegated Boro side of the 16/17 season, although he had minimal influence. Fry already looks a step up from the Championship at just 18, with stats like 16 aerial, 13 strength and 13 positioning and teamwork means he could very comfortably learn any system in England. In real life, Fry has just 2 caps, but with good performances in the Chamoionship this season, could we see this number increase? The youngster could easily last you 15 seasons, and with a few months of training, excpect to see those blues turn to greens. Is he the man for you? 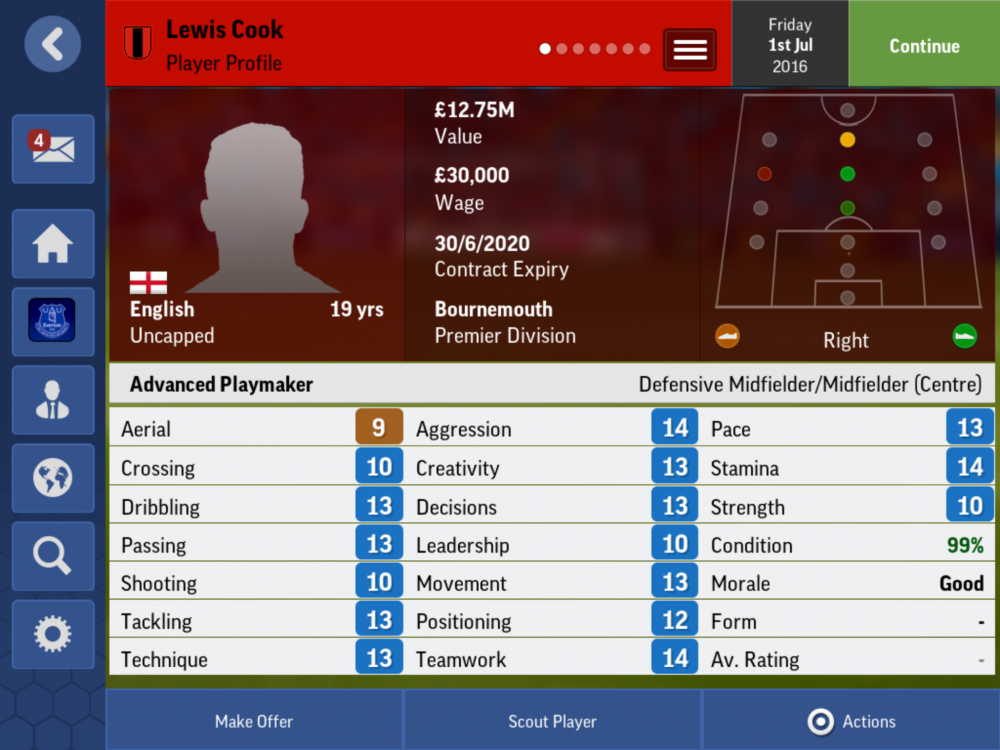 Cook is an FMM favourite for many, or was until his big move to the South Coast. His profile is littered with blues, but don't be surprised to see them turn to greens. He has managed to grab 2 assists and a goal so far at the World Cup, ranking him 7th on the overall list. At just 19, Cook possesses great stats, like 14 teamwork and stamina, 13 Tackling and passing AND dribbling and 13 pace, he has the legs and creative nature to run riot in the middle. Only question is now, can you use his talents effectively? 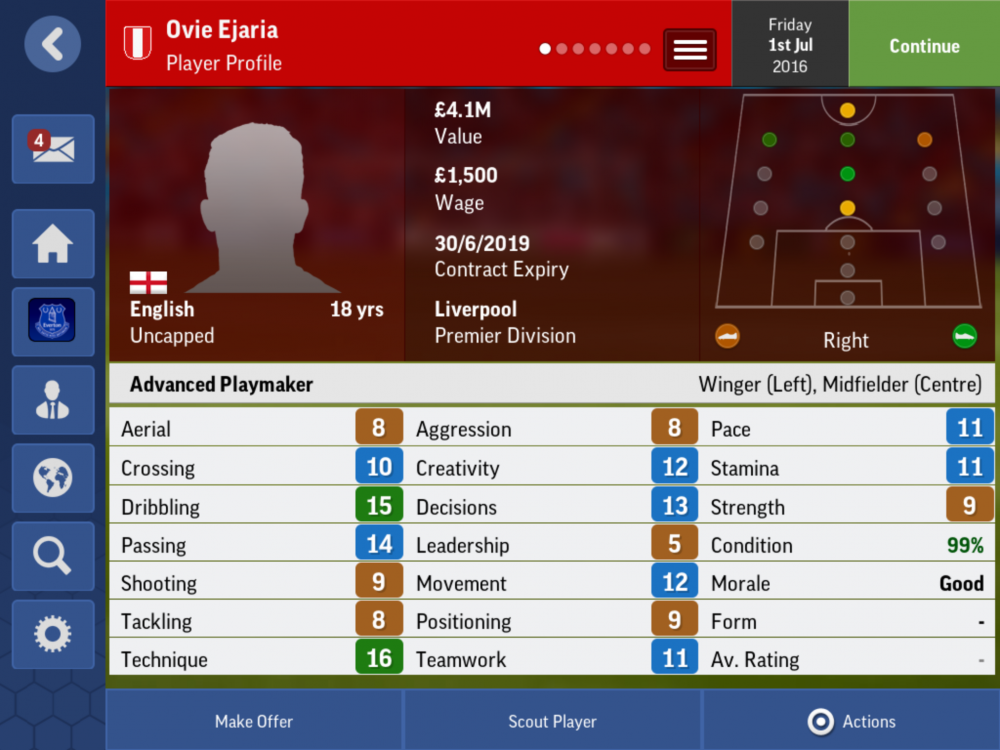 Ejaria already looks quality at just 28, and is definitely one of the more exciting talents on the list. Possessing such dazzling, well rounded attributes such as 16 technique, 15 dribbling, 14 passing and 13 decisions, he is already PL quality for most middle table teams. Having already gained 5 U-20 Caps, Ejairia looks set for a long career, with around 16 years of performance to be squeezed out of him. How will you fit Ejairia into your system? 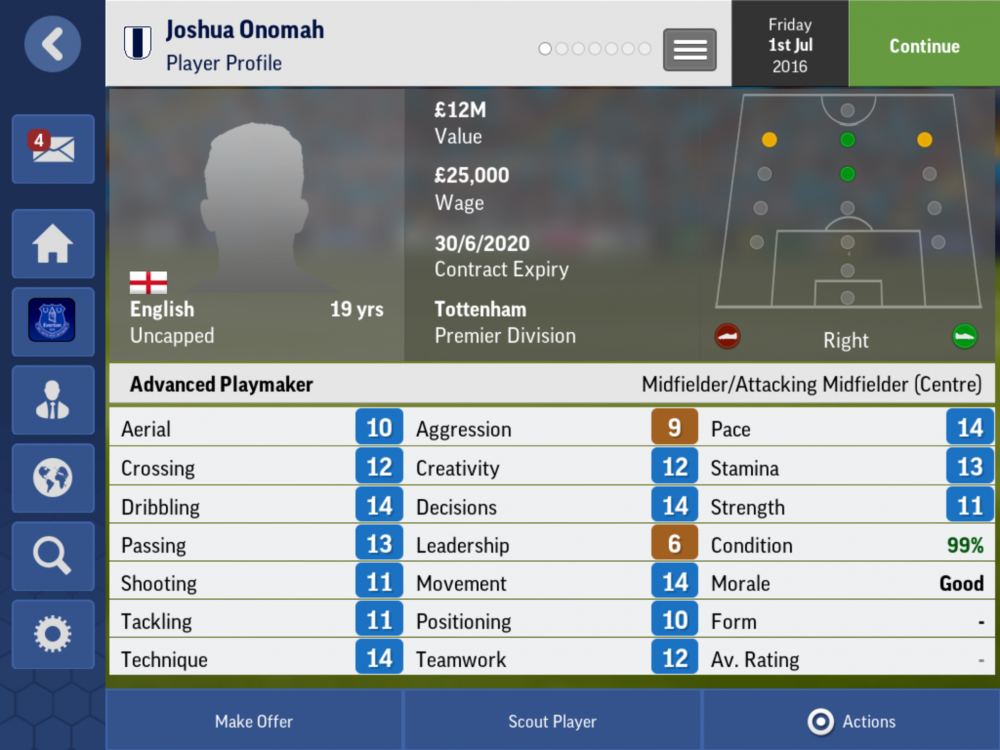 The fact Onomah is valued at 12 Million just shows how bright his potential is. At 19, he possesses such stats as 14 dribbling, pace and technique, 13 passing and stamina and 12 creativity, he has a bright future in the role you deploy him in. At the WC, Onomah has had limited playing time, but with quality and potential like he has now, it will be a matter of time before he breaks into the Spurs and England squads. 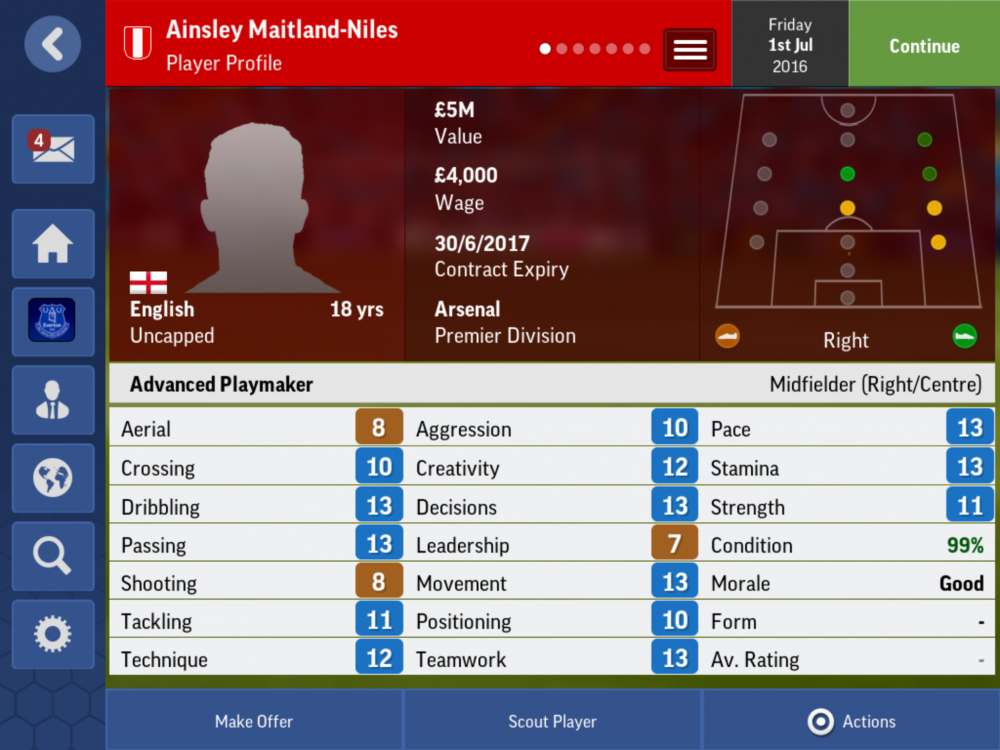 Maintland-Niles isn't the most pretty player to look at statistically, but there are a few silver lignings for this. One of these is the 13 passing, dribbling and pace he brings to the table, making it highly likely he will become a tricky Winger in his prime. Niles currently has the most U-20 caps, holding 10 to his name. He could likely last around 13-14 years for you in your team, wether deployed as a CM or a flamboyant Winger. How will you use him? Will he fit in? All are questions you will need to consider before buying this man, but be assured, whichever role he starts in, he will perform. 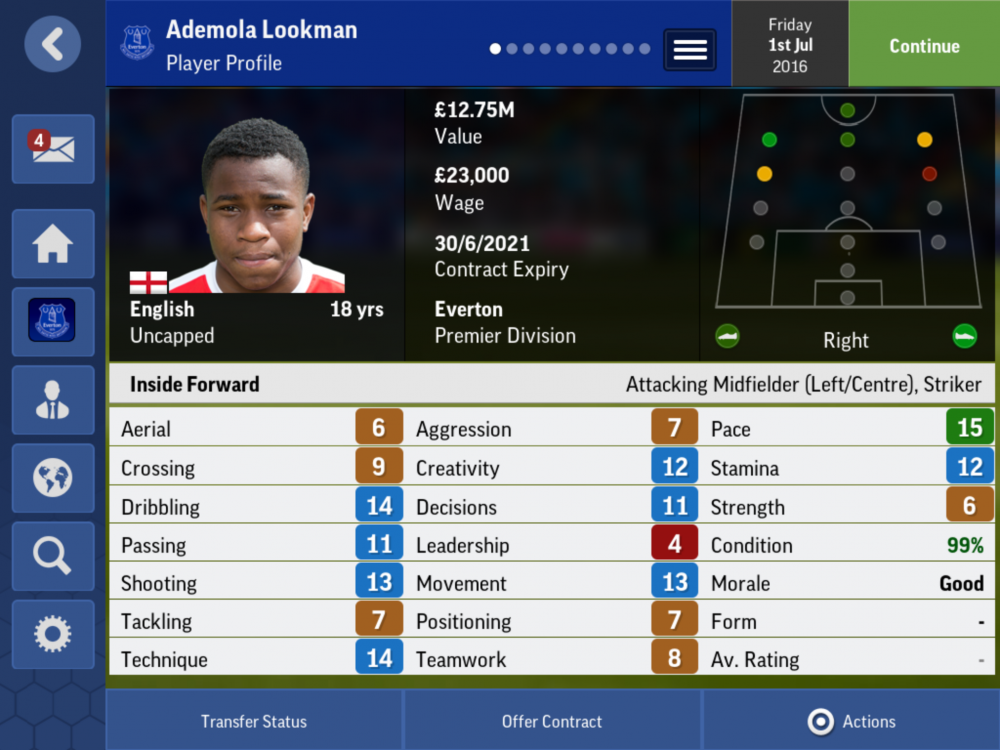 Lookaman's clinical nature is not shown in game, however such stats as 14 dribbling and technique, 15 pace and 13 movement almost make up for this. At just 18 years old, Lookman is one of the most exciting homegrown talents on the game, and will almost certainly develop for you, wherever you take him. Lookman has had a stellar campaign in South Korea, scoring 5 goals in 5 games for the England U-20's to fire them to the World Cup Final. If you are looking for a tricky Winger that shows similar qualities to Nani, Lookman is your guy. 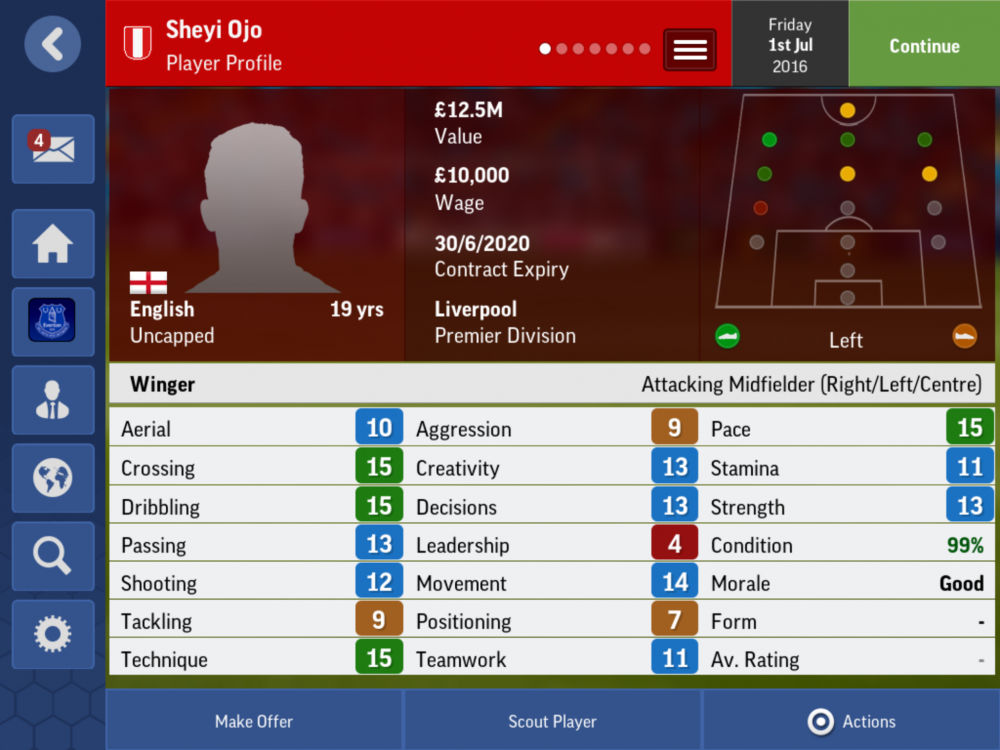 This lad is special. Ojo starts the game as one of the most promising teenagers around, and has the attributes to back it up. Incredible, tricky statistics like 15 technique, crossing, dribbling and pace all show why he is such a tricky Winger, and how he has massively helped England reach the final. His impact play from the bench for the young lions has bamboozled defences from any part of the world. The best thing is, these talents will keep you going for 12-13 years before a replacement is to be even thought about. Ojo is the most promising member of this squad. 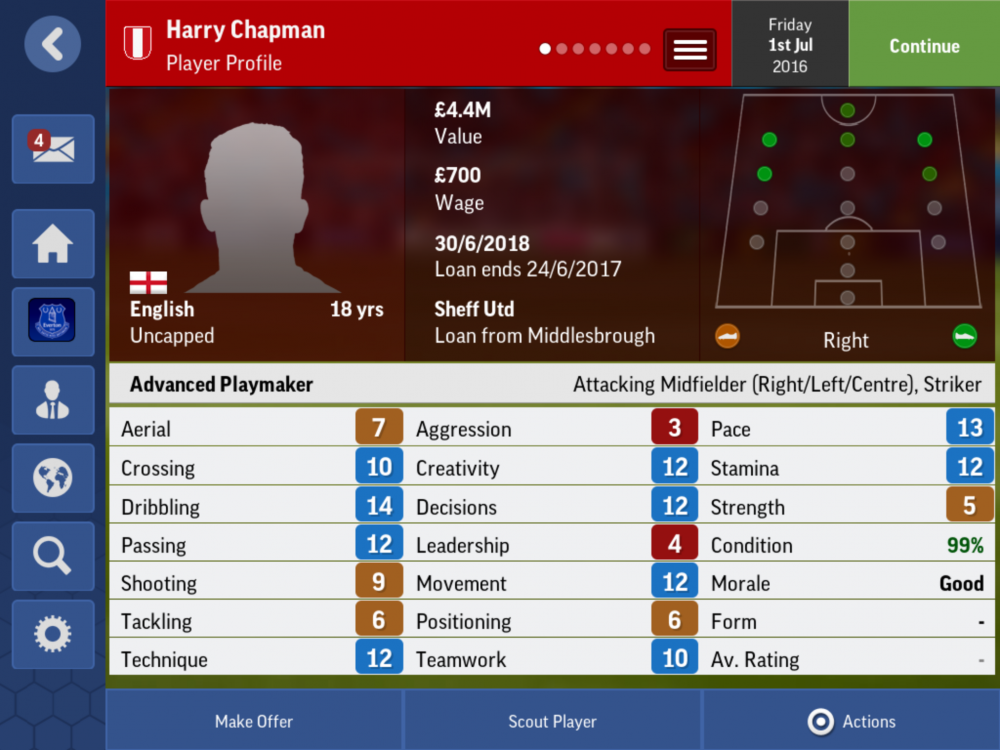 Chapman has been one of the lesser used players in the England squad in this tournament, but his attacking qualities show that he can more than deliver if called upon. At 18, Stats like 14 dribbling, 13 pace and 12 technique show he is already a skilful, reliable player, but whit a few months/years of training, how could he turn out for you? Despite his lack of appearances for th Young Lions, Chapman has played in 1 game, showing he is the required quality. The question is, can you up that quality? 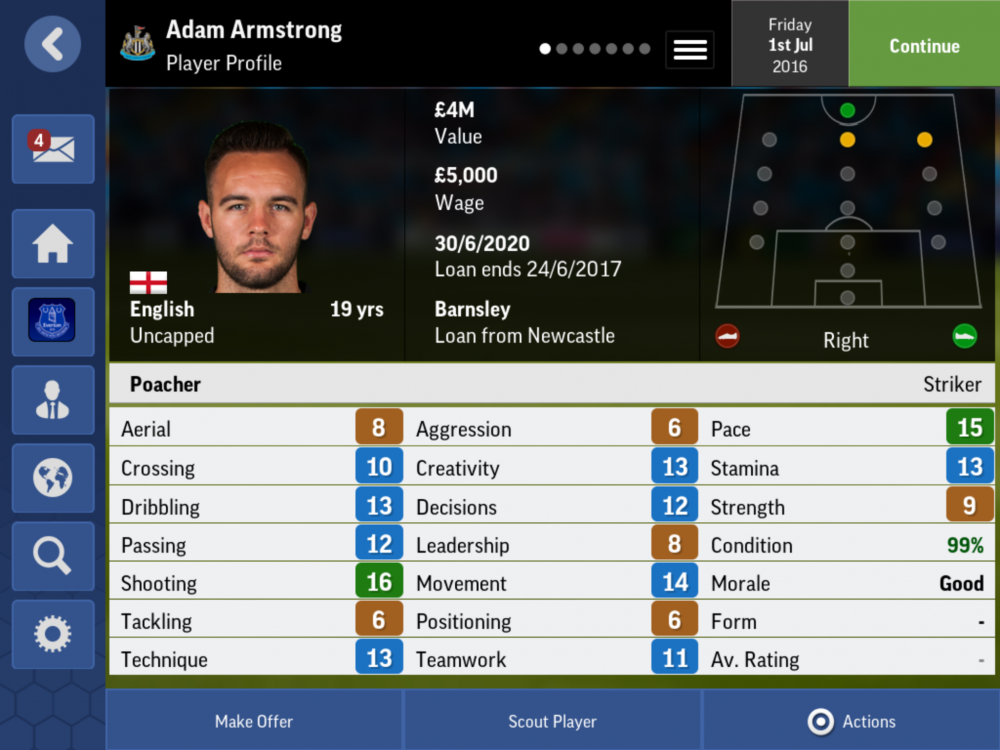 Armstrong had been clinical for the U-20's so far. 5 in 5 for them shows just how persistent with performance he is, and he is no different in-game. He has some incredible stats (Which, as @scratch99's favourite ever player, I'm sure he will know about) such as a phenomenal 16 shooting , 15 pace and 14 movement. All of these blended together show why he is such a popular player wherever he goes, especially in the national side. The I-20's have benefitted massively from Armstrongs striking prowess, with several goals pushing them to the final. But, how many finals could he ouch you to?

So, that is my article on the Young Lions! I hope you enjoyed that read, feel free to leave a comment on how these players have performed for you, feedback or just a general comment. Thanks for reading!