Such a simple and exciting question which hasn't been asked before going from my memory so I decided to do the leg work and discover just how fast these speed demons are! Before we begin however it's important to take a look at the FMM 2017 manual and check what the pace stat covers.

"For example, under 'Physical', you will find a player's Pace attribute. This takes into account his flat out speed, his acceleration and his reactions, and displays an attribute that takes all of this into account. In short, the attribute display doesn't take anything away, but merely streamlines the information into a more succinct format."

The pace stat is a combination of a players top speed, acceleration and his reaction time simplified into an all containing attribute. We can basically ignore the reaction aspect as we're focusing on a speed value while the acceleration part can also be overlooked as we aren't looking at how fast the players can accelerate/how long it takes them to hit their top speed.

Players With A 20 Pace Attribute

I loaded multiple saves looking for any players with this golden attribute but only these two were appearing which is no surprise considering they're considered two of the fastest players in Europe.

How Fast Is Aubameyang? 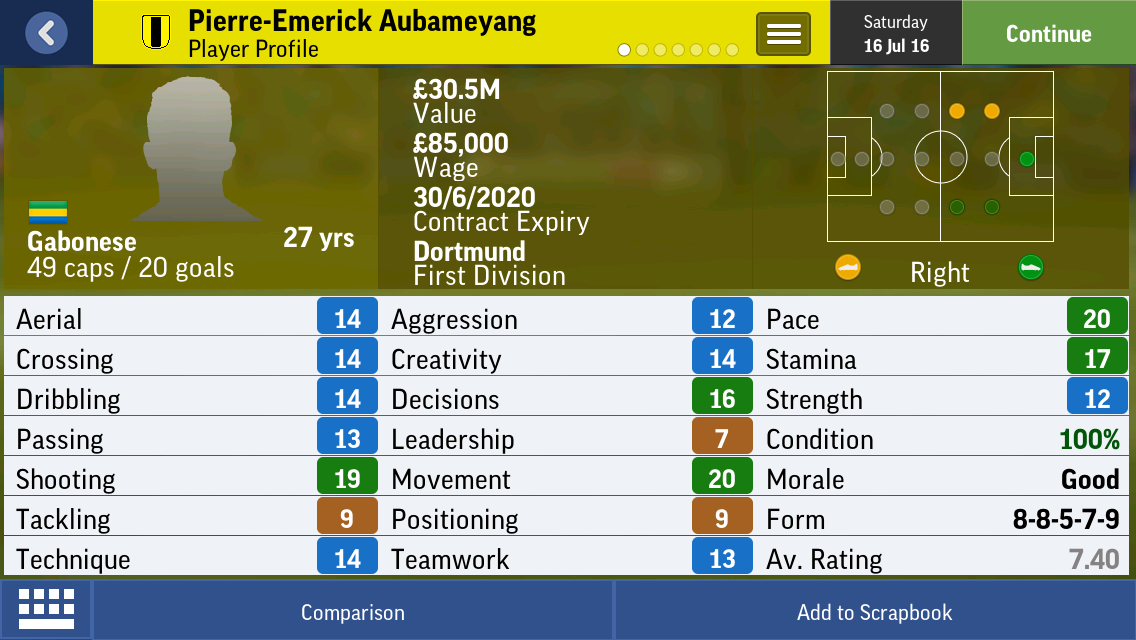 According to the research a quick Google search provided Aubameyang has been clocked at a staggering 34.60 KM/H which is 21.49 MP/H!

How Fast Is Bellerin? 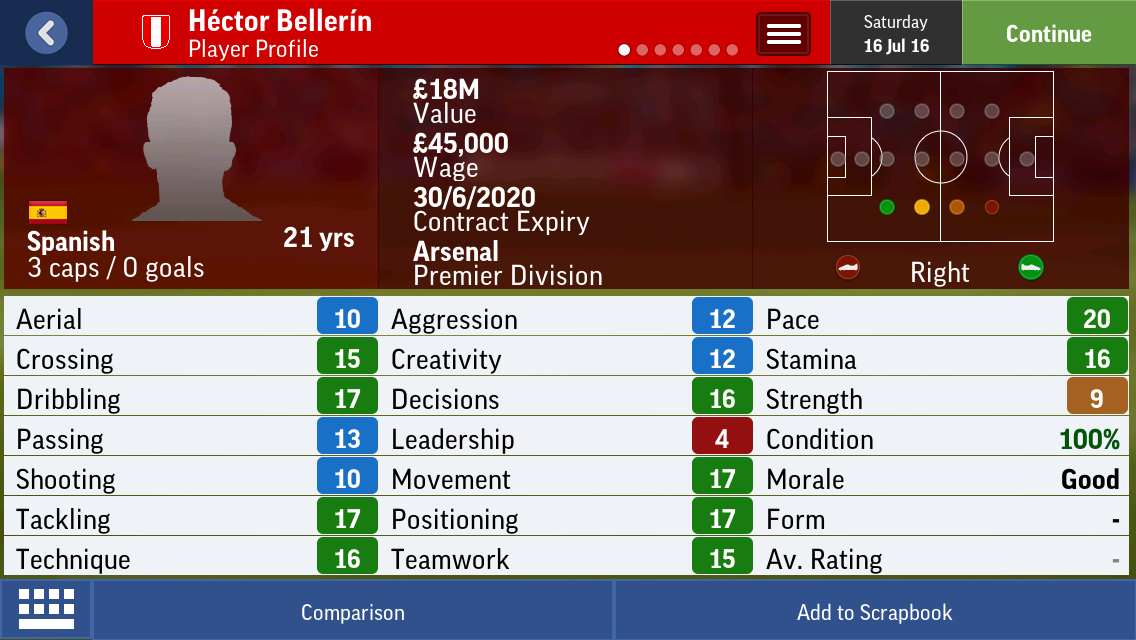 Again after some research I found that Bellerin's top speed is an even more impressive 34.77 KM/H which is 21.60 MP/H

With only two sets of results doing an average might not mean much but for those interested the values are 34.68 KM/H or 21.54 MP/H.

With the limited information we have available we'll have to assume a 20 attributed players top speed is in the region of 34 KM/H or 21 MP/H. For reference Usain Bolt's clocked top speed is a mind blowing 44.72 KM/H which is 27.78 MP/H! It's safe to say Bolt would need a whole new pace system implemented if he ever got his dream move to Manchester United!

One interesting fact I found while researching this article was that neither of these two players have the highest top speed in real life! According to research coming out of Mexico this year Gareth Bale is the fastest player on the planet with a 36.9 KM/H top speed to his name! Bale is no slouch in game with a respectable 18 pace stat which leads me to believe his acceleration or reaction attribute must be lower than the two players with the perfect 20's. Something else that caught my eye was Shane Long from Southampton was given a 35.31 KM/H top speed from Opta which would place him above our more well known speed demons and his pace stat in game is 17/20. Then you have Wayne Rooney who's not really known for his pace yet according to my research he hit a top speed of 31.20 KM/H this season yet his pace stat is a rather average 12/20 in game.

What this shows is how the hidden stats combine to create the stat we all see on a players profile. From these findings Bale can eclipse the speed of the two 20 attributed players while someone like Shane Long can also out speed them. We'll have to assume maybe these two top tier talents have a slightly lower top speed but maybe higher reaction and acceleration attributes which counteracts the top speed stat to keep them top. Without being able to access the hidden information personally we'll just have to assume this at this point. What it does show however is signing a player with a 20/20 pace attribute doesn't necessarily mean you're signing the fastest player on the game in terms of pure speed as he could have a lower top speed but a stronger set of complimentary attributes.

I'll be honest and say i have no idea what I'm talking about relating to this topic so if all this is rubbish I apologise as this is just meant for fun. Using the research available and taking logical (to me) leaps this article was put together for enjoyment so hopefully it has some legs. Obviously I'm dealing with top speeds and not average speeds for a season and I'm having to work without context (distance covered etc) and I'm sure those things would impact this. Like I said this is just for fun and I did the best I could with my knowledge and information available.

Thank you for reading and I hope you enjoyed it, as always all comments are appreciated.

How Fast Is 20 Pace?  Such a simple and exciting question which hasn't been asked before going from my memory so I decided to do the leg work and discover just how fast these speed demons are! Be

I want more depth more than most but adding more stats won't make the game easier, it'll just confuse new fans. FMM is a casual game and it has to have the right balance between casual and deepness. I