Five clubs to manage in your final FMM17 save

Five clubs to manage in your final FMM17 save

With Football Manager Mobile 2018 only a couple of months away you may be thinking about one final team to start a career with. It can be very easy to always play as a big club, a sleeping giant or the team you support. I hope these clubs will inspire you to try something different perhaps in a league you have never managed before.

I personally don’t like to update my game beyond the official winter update as I find this makes the new game feel fresher than if I have already been playing with the new season squads. This means I have based these recommendations on the 2016/17 squads and divisions.

Having been founded as Postal Utd in 1966 the club took its current name in 1986. They won consecutive Lowland League titles in 2014/15 and 2015/16. Edinburgh City where promoted to Scottish League 2 for the first time at the end of the 2015/16 season after beating East Stirlingshire in a playoff. 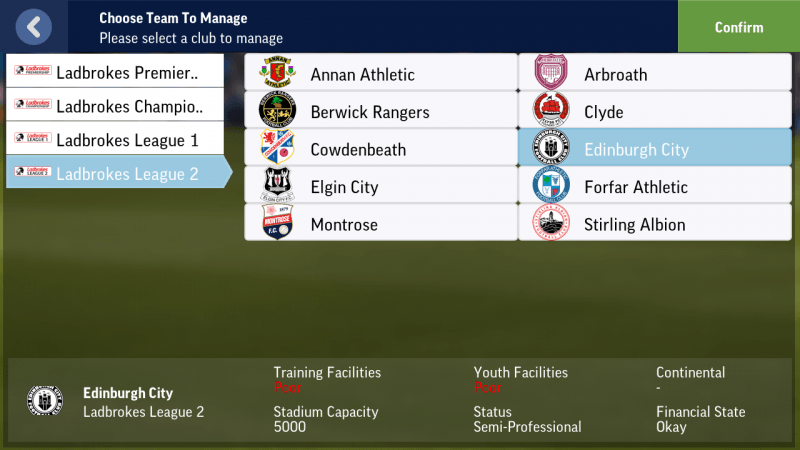 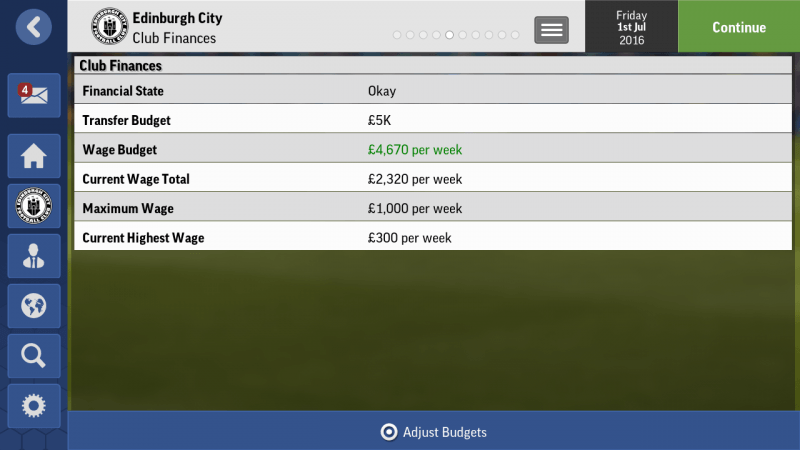 As you are taking over a club newly promoted to the Scottish Football League the training and youth facilities aren’t the best. You do have a decent size stadium though which could see the club through a couple of promotions before expansion is needed. There is only £5k to spend on transfers but you are well under your wage budget so there is the chance to bring in new signings. 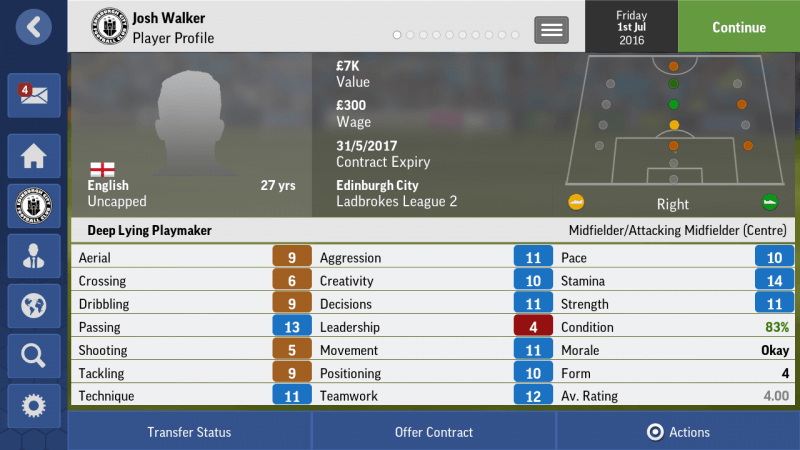 Josh Walker is a deep lying playmaker who you can look to pull the strings in midfield. He doesn’t have the best technical stats although his passing and technique are decent for League 2. His mental and physical stats look better and I’m sure he will do a good job for you in the first season. 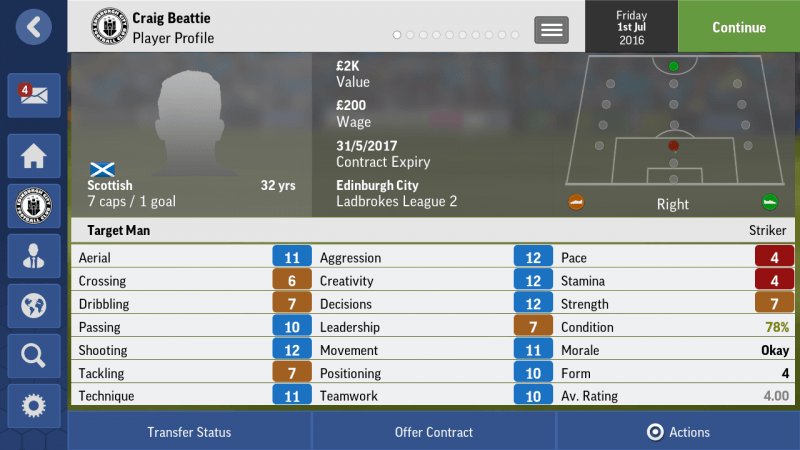 Craig Beattie is a true journeyman striker having played for a whole host of teams including Celtic, West Bromwich Albion and Swansea City. He also has 7 caps for the Scottish national team. Played as a target man he could cause problems for defences although I think you would require some pacey players to play with him.

The board are expecting a safe mid table finish in the first season. This should be achievable with some additions to the squad and the money is there to bring some players in. Only the champions get promoted but 2nd,3rd and 4th go into the playoffs. With only 10 teams in the division perhaps a playoff push wouldn’t be out of the question in the first season. In the longer term, the aim has to be promotions up the league and look to challenge Hearts and Hibs as the dominant team in Edinburgh. Then beyond that to break the domination of Celtic and Rangers at the very top of Scottish football. 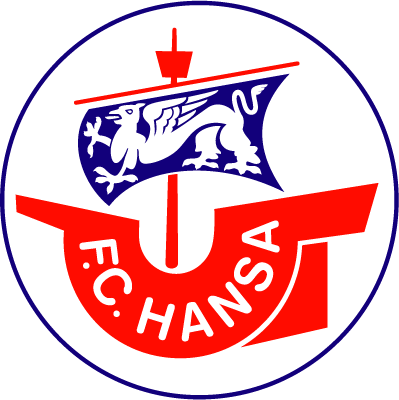 Hansa Rostock have the distinction of being the final league and cup champions of East Germany before re-unification in 1990. The club enjoyed a 10-year spell in the Bundesliga between 1995 and 2005 but have now been in the German third division for 5 years. 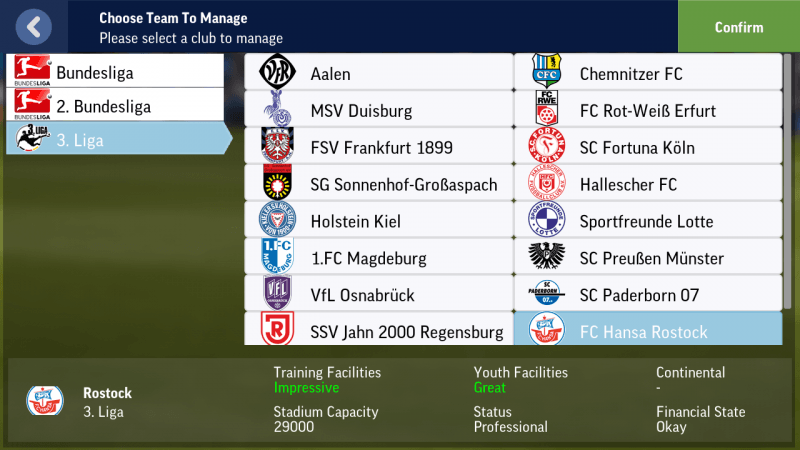 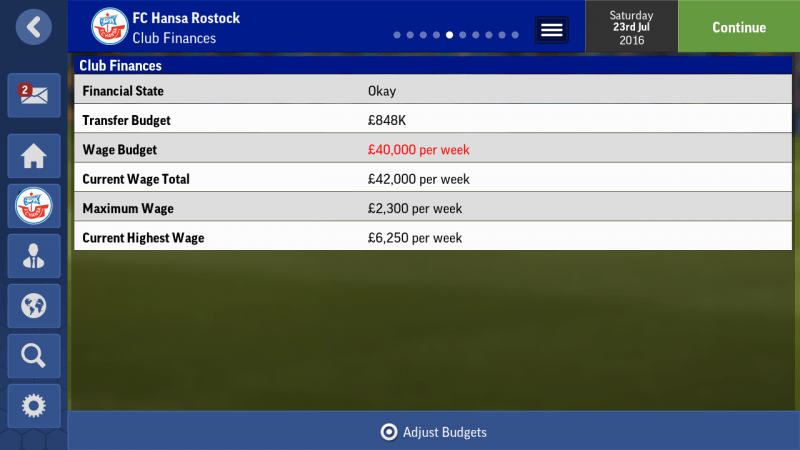 If you take over at Rostock you will have impressive training facilities and a great youth setup at your disposal. A large stadium holding 29,000 will also be useful as you move up the leagues. You will need to look into the wage budget at the start as the club is over spending by £2k per week but with £848k in the transfer budget you can adjust the budgets. 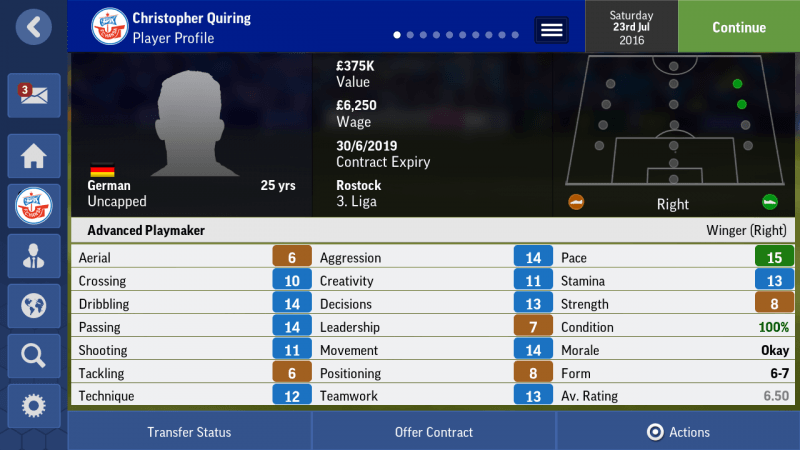 Christopher Quiring is one of the highest earners at the club so you will want to get the best out of him. A quick right winger he is let down by his poor crossing. His dribbling and passing are good leading the game to have advanced playmaker as his best role. 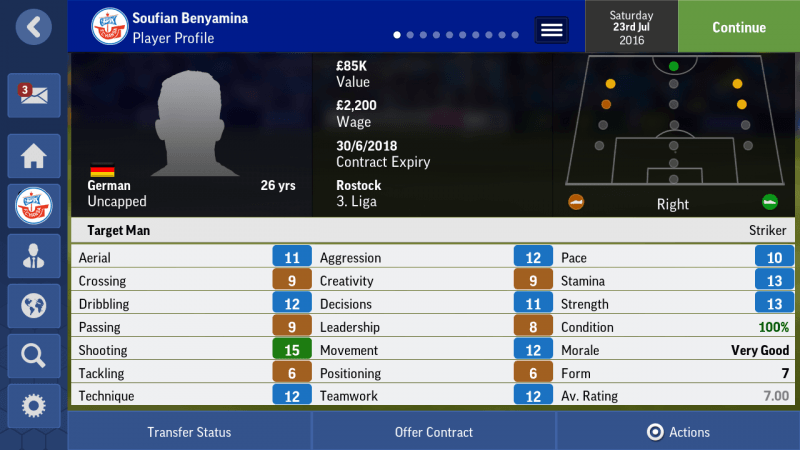 Although he is lacking in good stats elsewhere with shooting of 15 Soufiane Benyamina should get goals for you. It will be important to get your tactics right to make the best use of both these players.

It is expected that you will finish mid table in the first season but by using the talent in the squad and buying well surely you can do better than that? The infrastructure is all there to start pushing the club up the leagues and getting Hansa Rostock back into the Bundesliga. No former East German club has won the Bundesliga so can you beat RB Leipzig to get that honour?

Znicz Pruszkow highest finish to a season came in 2007/08 season when they finished 5th in the Polish 1.Liga the second tier of Polish football a feat they matched the following season as well. Since those heady days things haven’t gone so well and they are now in the Polish 2nd tier. The clubs most famous former player is Robert Lewandowski who played for the club before moving to Germany. 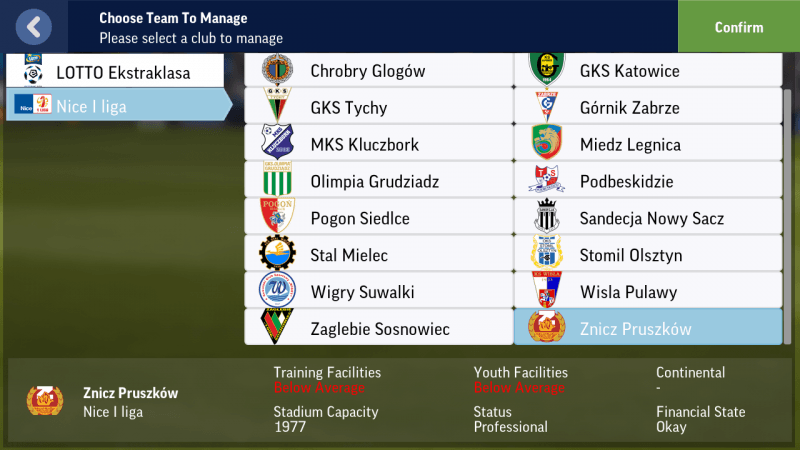 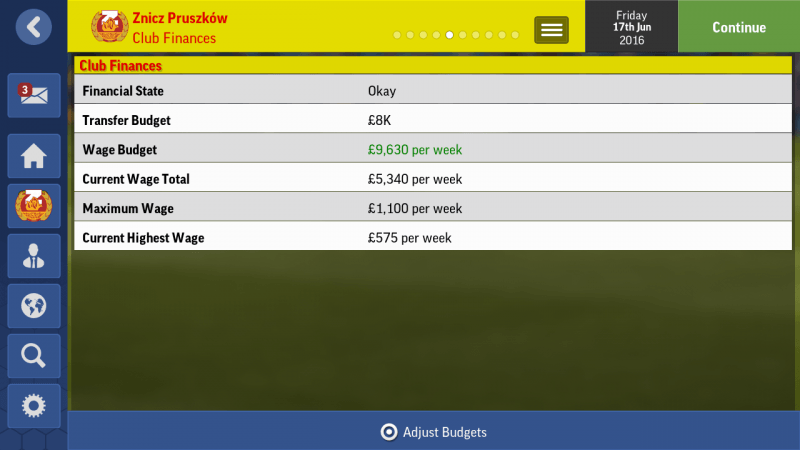 The facilities at the club are below average and the stadium has a tiny 2000 capacity so this could be a slow burner of a save as you build the club up. With only £8k in the transfer budget you will probably have to search for free transfers if you want to add to the squad. Luckily there is plenty left in the wage budget so new players aren’t out of the question. 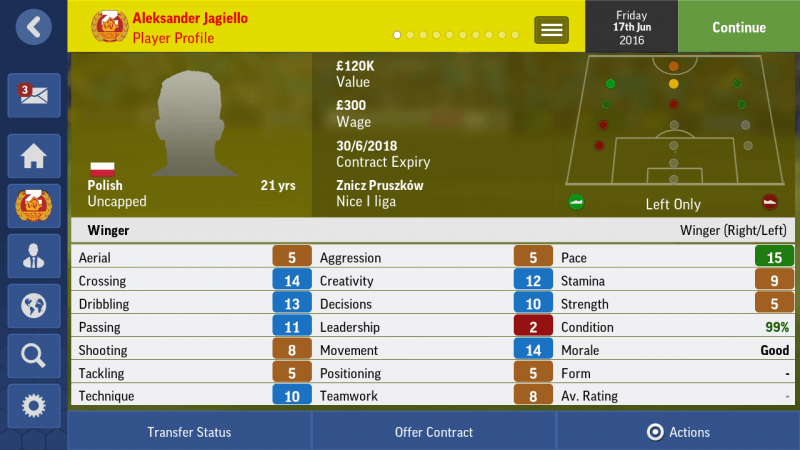 The squad isn’t completely lacking in talent. Aleksander Jagiello looks a good prospect. With his pace and crossing he should cause a lot of problems for the opposition. The big problem may be keeping hold of him if bigger clubs start sniffing around. 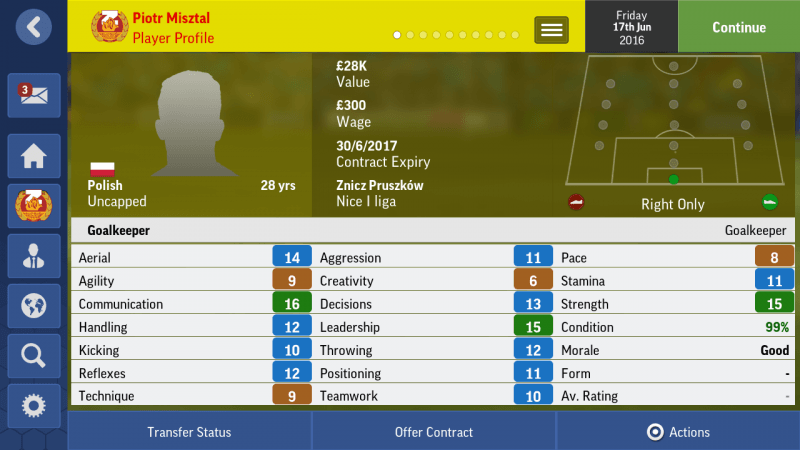 Goalkeeper Piotr Misztal may have a lot of work to do during the season so it’s a good job he looks pretty decent.

The board expect you to improve the quality of the squad which I take to be code for just try not to get relegated. This club could really test your management skills as you look to secure your league statues and then try to move them up the league and into the top division for the first time in there History. 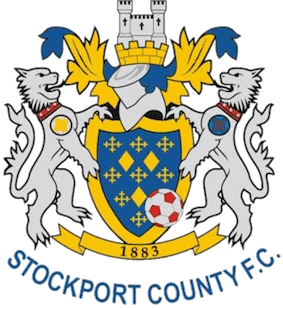 Stockport County where members of the Football League from 1905 until 2011 when they were relegated to the National League. In 2013 things got worse for fans of The Hatters as the club was relegated to the National League North which is the 6th tier of English football. The club’s finest moment came in 1996/97 season when they reached the League Cup semi-finals losing 2-1 to Middlesbrough. 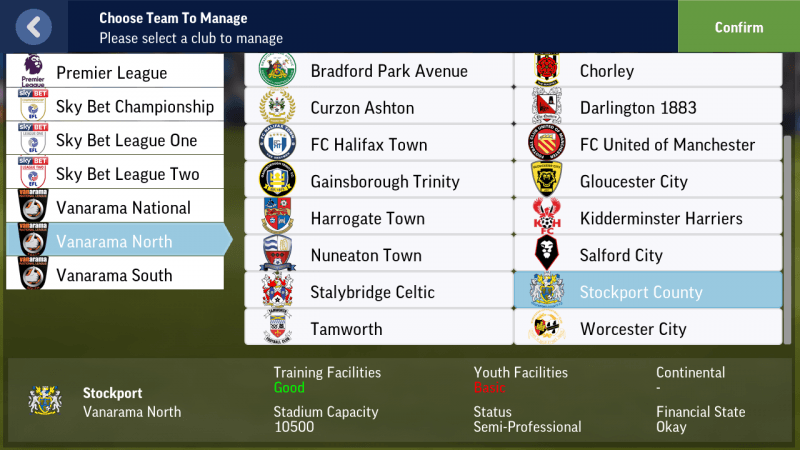 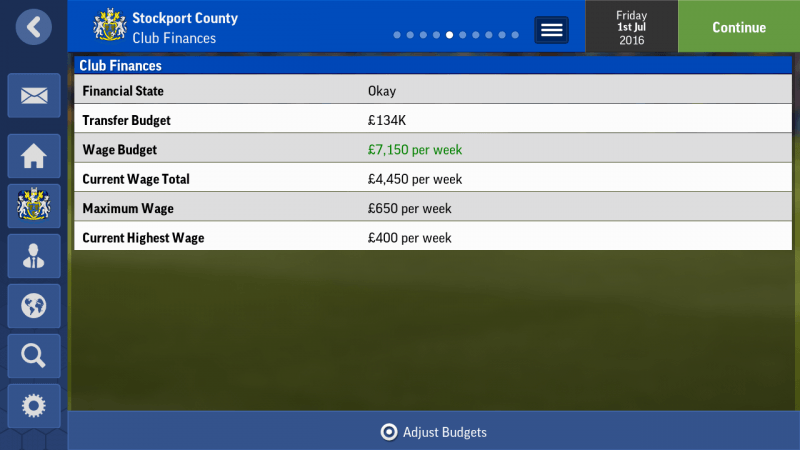 Stockport’s history as a Football League side means the club can boast some good facilities for this level of football. The training ground is rated good although don’t expect great regens as the youth setup is only basic. You will find plenty of money available to you if you want to improve the squad. With £134k to spend on transfers and plenty of wage budget left the only problem might be attracting players to play in the 6th tier. 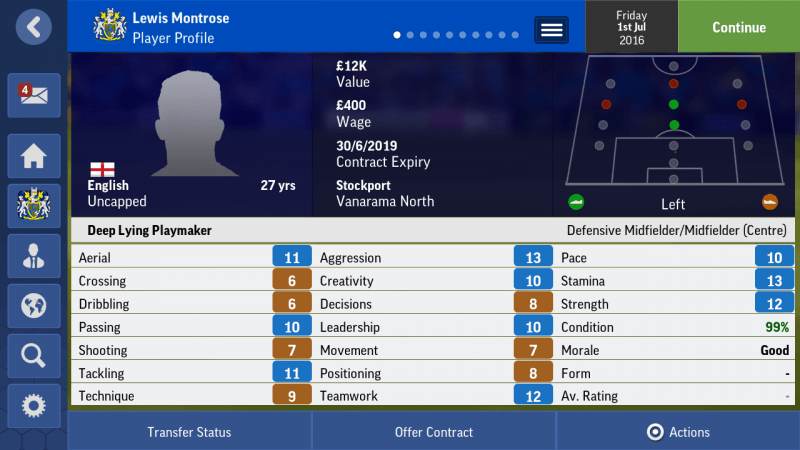 Lewis Montrose is the strongest midfielder at the club which shows you the standard of the squad and league! He does have some decent stats for a midfielder at this level and could be used as a deep lying playmaker or a box to box midfielder. 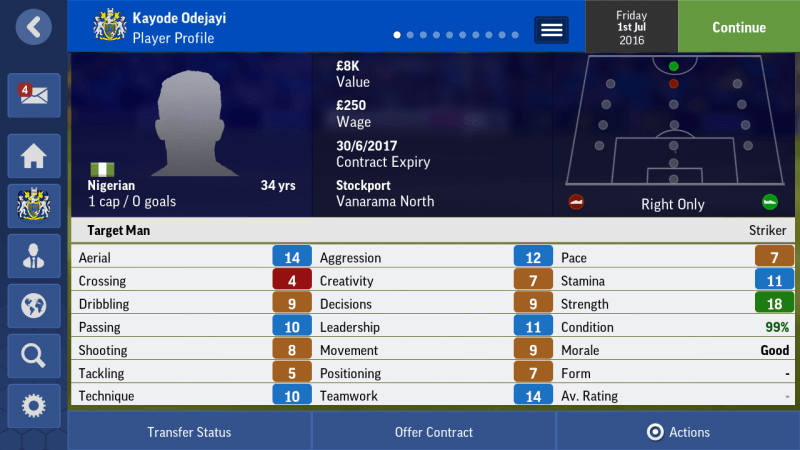 Journeyman striker Kayode Odejayi looks a useful player if you plan to use a target man. With his strength and aerial ability, he should be able to hold up the ball well and if you can get good crosses into box score a few goals as well.

The board expect a mid-table finish so if you don’t get it right straight away you should at least be able to keep your job. A club like Stockport should really be in the Football League so that has to be the aim in the first few seasons. Then can you go one better than the class of ’97 and get into a cup final? 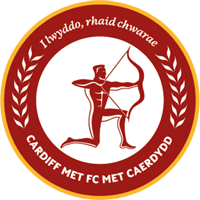 There are only two Welsh Premier League teams which aren’t semi-professional. Perennial champions TNS are a full time professional club and then there is Cardiff Met Uni who are all amateurs. The students were promoted to the top flight in 2016 so you will be taking over in their first season at this level of football. 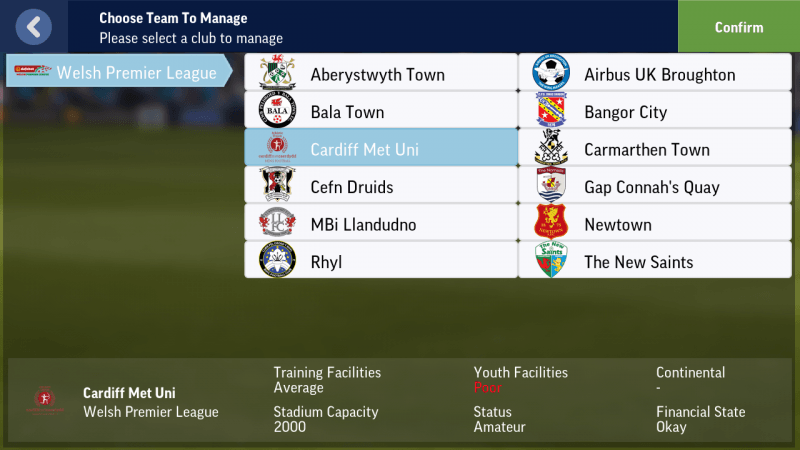 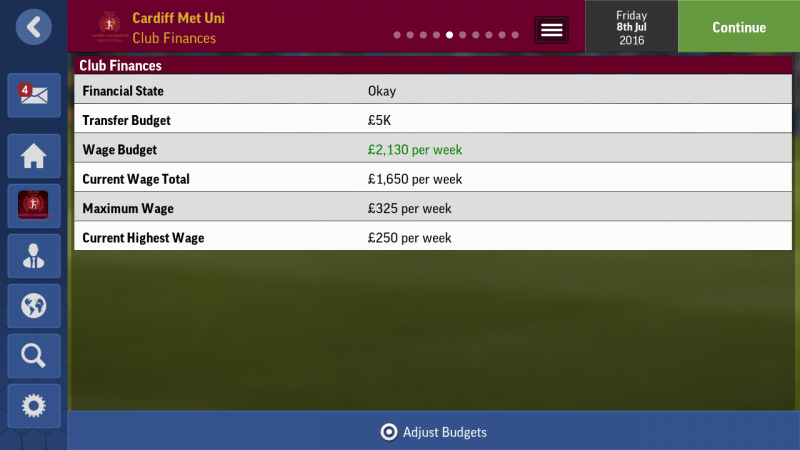 The training ground is average which is very good for Welsh Premier League Club but youth facilities are poor. The stadium holds 2000 fans which doesn’t sound much but it isn’t the smallest in the division. You will have a transfer budget of £5k which may be better added to the wage budget as free transfers are your most likely source of new players 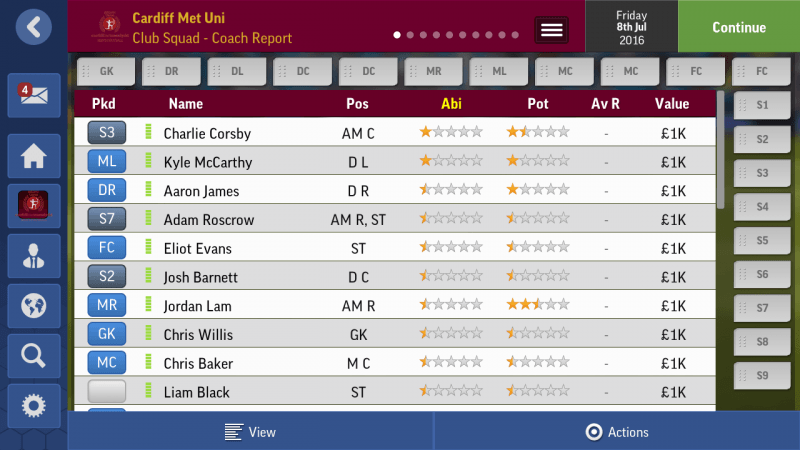 As you can see the coach has a high opinion of the squad that is available to you. I think this demonstrates the challenge that you have managing Cardiff Met.

Here are the stats for the one star rated players not the worst players in the Welsh Premier but there is still a lack of quality in the squad. 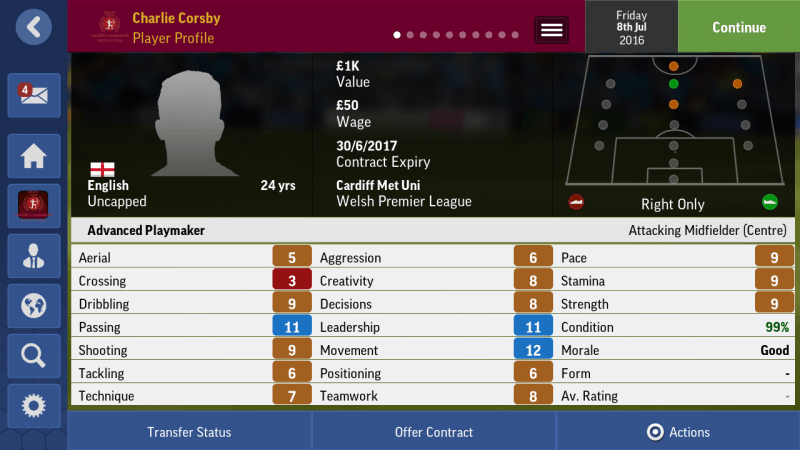 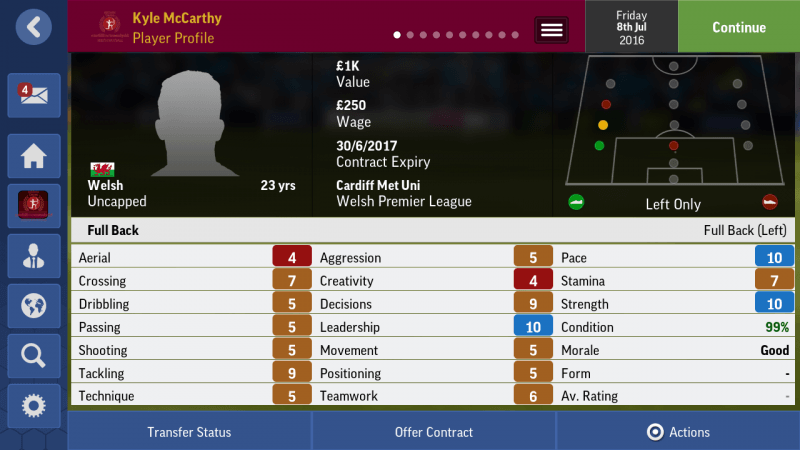 Cardiff Met only just missed out on Europa League football on the final day of the season in real life. In game, the board want a mid-table finish which would be a good achievement with the young squad you have at your disposal. In the long term can you topple TNS and become champions of Wales?

Have you managed one of these teams already? If so let me know how you got on with them. If you turned Cardiff Met Uni into European Champions I will need to see screenshots! Perhaps you have your own recommendations of teams that others should try in this year’s game.

Thank you for reading.