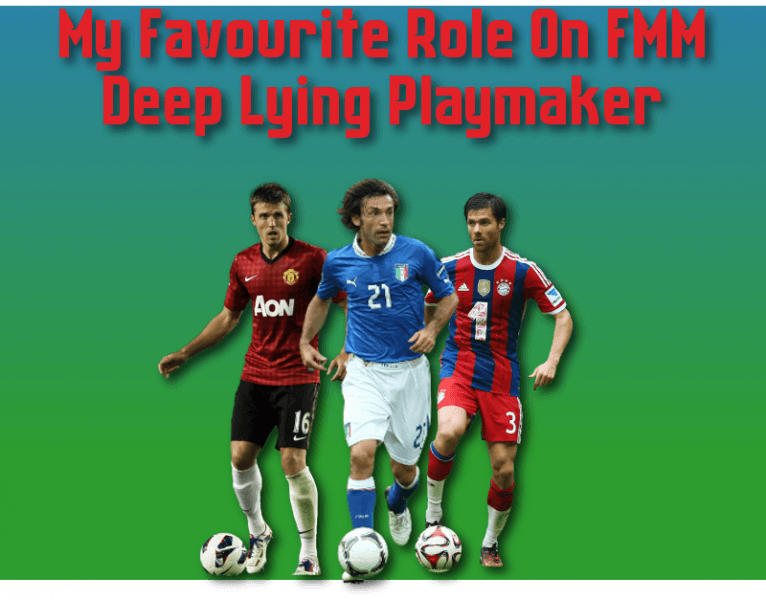 When I think of a deep lying playmaker (DLP), players such as Michael Carrick, Xabi Alonso and of course Andrea Pirlo instantly come to mind. These are the guys that just seem to have that extra split second on the ball to get their head up and assess the situation and then pick the perfect pass. They make the whole team tick by controlling the tempo of the game and getting the ball from defence and moving it on to players in better positions further up the pitch

I cannot think of a successful tactic I have ever used which doesn’t contain a DLP in the midfield and to be honest I never even think of not including one when I create my tactic. Of course, like real football everyone has their opinions and preferred ways of doing things within FMM. This article isn’t intended to say this is how you must play the game. Its more this is how I see one role within the game and how I utilise that role. Maybe you don’t rate DLPs and never use them if so let me know in the comments below why.

Let’s start with what FMM tells us about DLP. This can be found in Tactics > Roles and then click on the i icon.

The DLP operates in the space between the defence and the midfield and aims to initiate moves via pinpoint passes to players positioned higher up the pitch.

I have some screenshots that I hope will demonstrate this better later in the article but first let’s look at what abilities you need in this type of player.

The DLP can be played in both centre midfield and defensive midfield and the stats you require depend on how much you expect from that player. The following screenshot shows Danny Drinkwater who along with Jordan Henderson play the DLP role in my England save. Neither are the best DLPs in the game but they play the role well. I have highlighted in red the stats that I believe are vital to play the DLP role effectively, of course in lower leagues you may not fulfil every requirement but you should look for as high a rating as you can get. 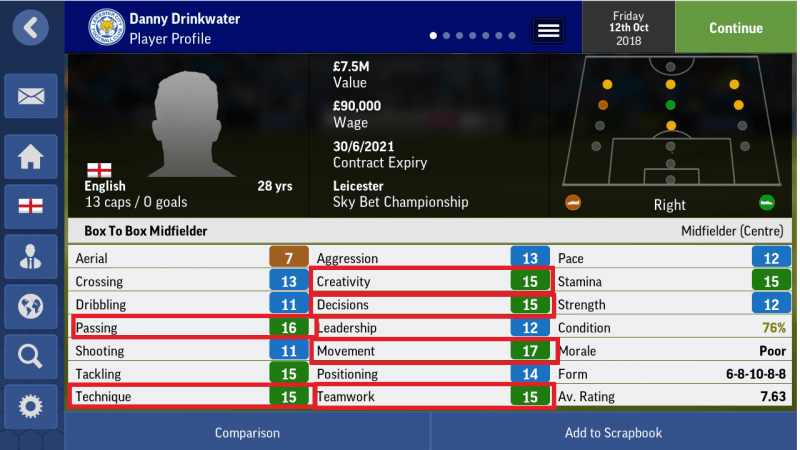 Passing and creativity are linked and simply you want these stats as high as you can get. The DLP main job is to pass the ball and not just simple sideways and backwards passes but also defence splitting passes so they need the creativity to be able to do that.

Having a high decisions rating means they will pick the right times to try those more ambitious passes and when they should keep it simple and just give it to the nearest teammate.

With good movement, your DLP will pick up good positions to receive the ball from team mates. Often a DLP won’t have the best physical stats (think Andrea Pirlo or Luka Modric) so they need this on field intelligence to compensate.

The DLP is the heartbeat of the team and needs to work well with his teammates that’s where a high teamwork rating comes in useful.

You may want a little more from your DLP. I often have my DLP playing in the defensive midfield position and acting as my most defensive minded midfielder. In this case you will want to look for some additional stats on top of the stats above which I have marked in yellow on this screenshot of our man Drinkwater. 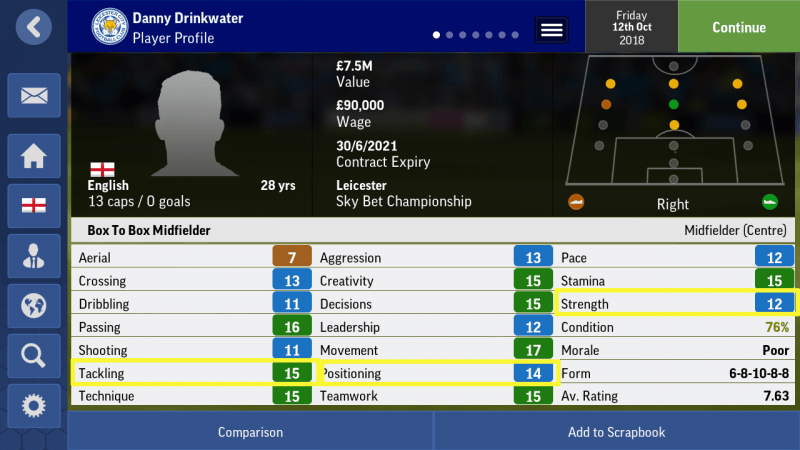 I think tackling and strength speak for themselves you want him contributing to the defence so these are important. You could add aggression in as well but I don’t worry too much about that when looking for a DLP.

Positioning obviously affects if your player takes up the right positions on the pitch. A high rating here could compensate for lower tackling and strength. This is because if your DLP can take up good positions in front of your centre backs he can intercept passes and win the ball back without the need to tackle the opposition. If you want or need to play counter attacking football look for good positioning in your DLP as he can win the ball back whilst keeping the shape of the team. This is because he won’t need to dive into tackles and get caught out of position which cause openings for your opponent to exploit.

All this theory is great but how does it look on the pitch. As I mentioned above you can utilise a DLP in centre midfield and defensive midfield. There are so many formations and player roles you could combine with your DLP that I can’t go through them all but there are a couple of rules I think you should try to remember.

1.   Think about the style of play you want. If you are playing a direct style you will probably want your DLP to be your main creative out let using his passing ability to get the ball forwards quickly to the wingers or strikers. If you’re playing shorter passing the DLP will be a link man getting the ball from the defence and either retaining possession with short passes or he will look to get the ball to an advanced playmaker further up the pitch.

2.   It sounds obvious but your DLP needs players to pass the ball to and remember the DLP is quite a static role who won’t make many forward runs. Make sure in a shorter passing game you have plenty of options around the DLP for him to pass to and that you have options further forward on the pitch for him. This can be in attacking midfield or centre midfield just so long as there are players making forward runs or in advanced positions otherwise the DLP becomes redundant within the team.

I played two matches to give you some examples of the DLP in action. In the first game against Spain I used the DLP in defensive midfield. This was a tough game for the DLP to make an impact in due to Spain playing the same formation as us and cutting out the passing options for him. What I did get was some good examples of how he can help out in defence and show some of the limitations he faced when he had the ball. Henderson played the full 90 minutes and was wearing Number 6. 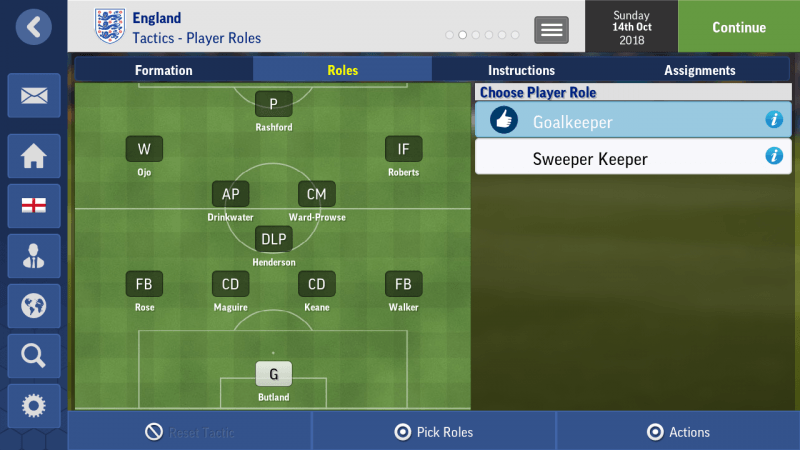 Our centre back has broken out of the back line to challenge Alcacer in the air from the goal kick. You can see Henderson is dropping back into the defence to cover for Keane being out of position. 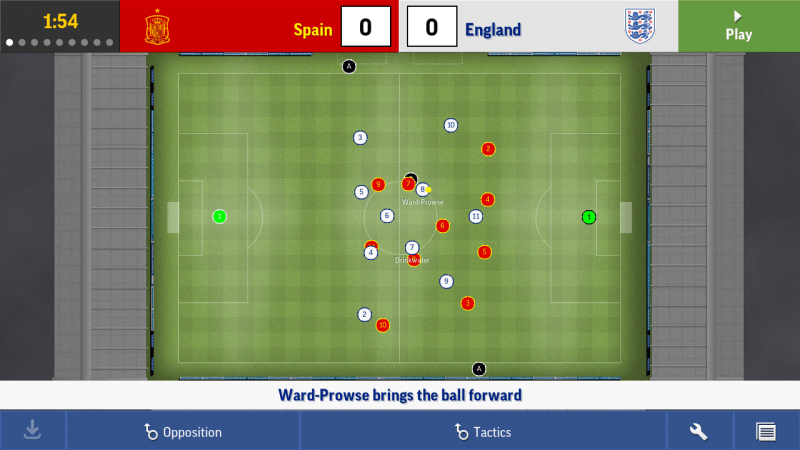 We are on the attack here and you can see Henderson sitting in front of the defence filling the gap between the two centre backs. As he is unmarked he also provides an option for Ward-Prowse to pass back to if he needs to which can help us keep possession. 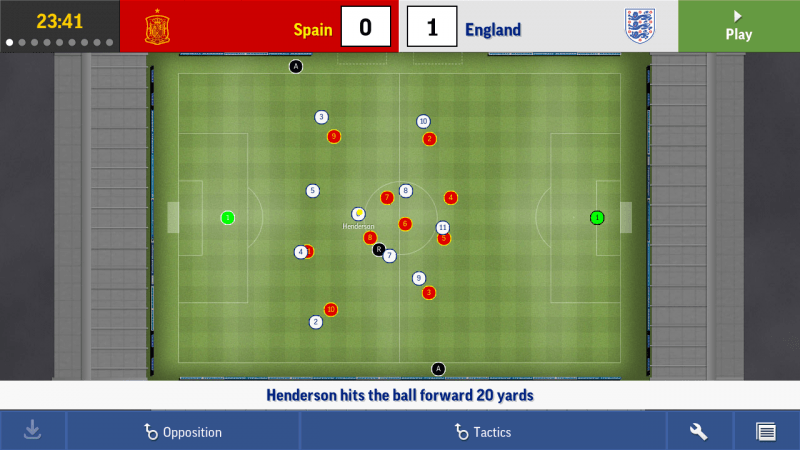 Here we can see Henderson is possession having received a pass from our centre back (No 5). You can see that our other midfield players are well covered by the Spanish midfield although Alli (No 7) is becoming available for a pass due to the Spanish midfielder moving across to closs down Henderson. On this occasion Henderson looks for the ball over the top by hitting it into space for our left winger (No 10) to use his pace to get onto.

The second game I played was against Wales and I started with a 4-2-3-1 with the DLP in centre midfield position. Danny Drinkwater played in this game wearing the number 7 shirt. 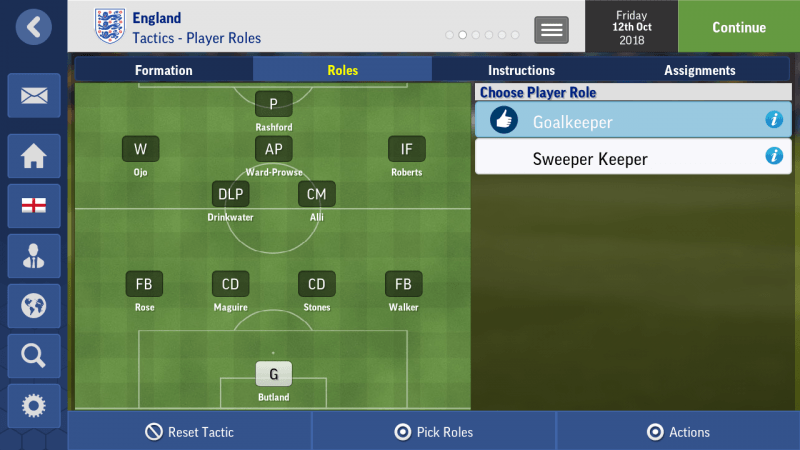 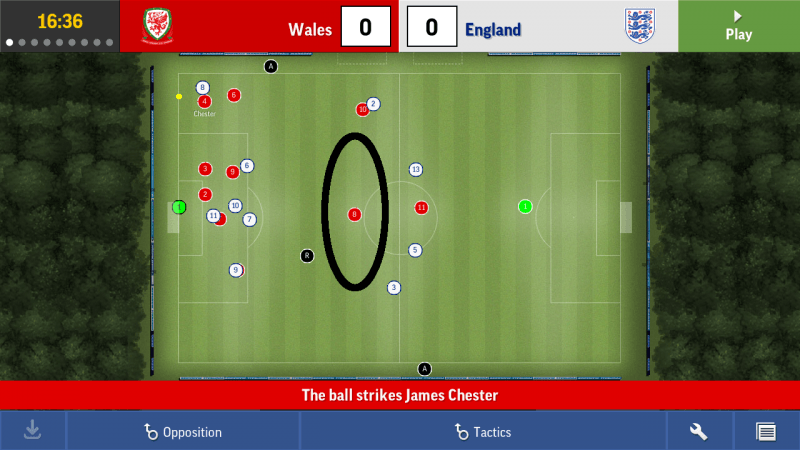 You can see here that Danny has joined the attack and is on the edge of the area. This is a great position as if the cross was cleared it could fall to him and give him the chance of shooting a at least retaining possession and pressure on the Welsh defence. The only negative is that if the winger gave away possession there is a large open space with an unmarked Welsh player and a well-placed clearance could find him and start a counter for Wales. In this case the cross deflected of the defender and we won a corner. 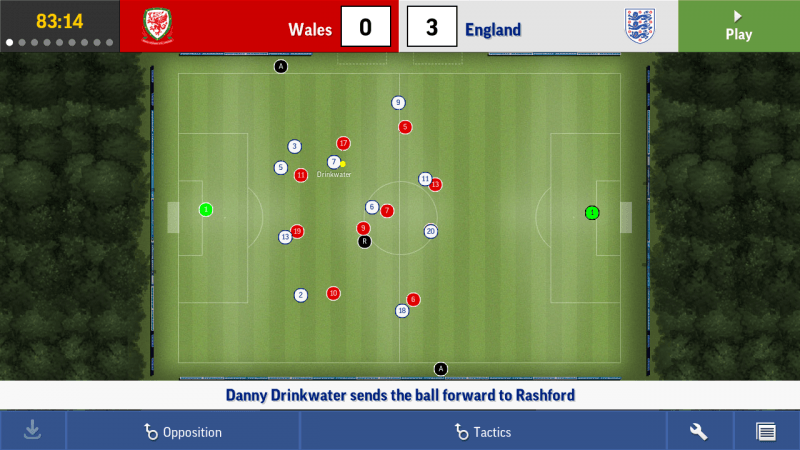 We moved to a 4-4-2 in the second half with Drinkwater still the DLP in centre midfield. He has the ball deep in the midfield and sends a direct pass forwards to Rashford (No 11) looking to initiate a quick attack. 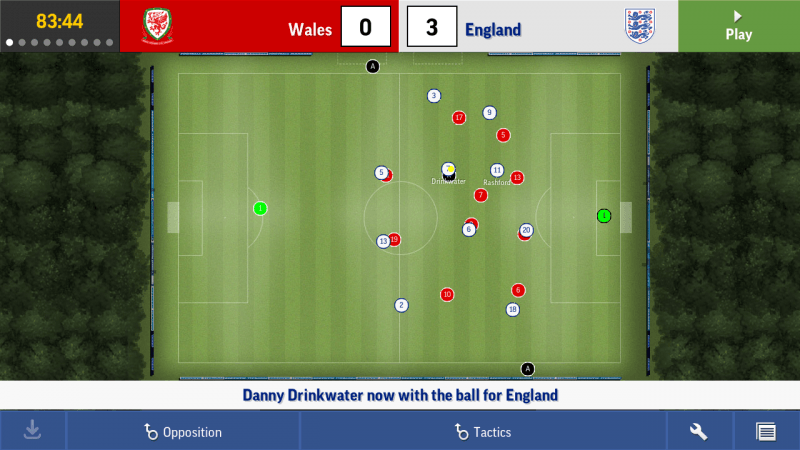 Rashford isn’t able to hold the ball up and its cleared by the Wales defender but it goes straight back to Drinkwater. He has a few options available to him and little bit of time to pick a pass. We had moved to direct passing so he is our only playmaker in the team and he is keen to pass it forwards trying to unlock the defence. He doesn’t pick the best option this time as he attempts to pass it to number 20 who is offside this is a situation where you need a player with good decision making as the better options where a short pass to Rashford or out wide to our full back (No 3) or winger (No9).

Whatever style you are playing you shouldn’t necessary expect bucket loads of assists from your DLP. As I have said earlier he is a link man within the team, his job is to get the ball to the glory players in the team such as the advanced playmaker or wingers who then deliver that killer pass or cross and get the glory of an assist. It’s a very unsung role and much of what he does for the team can go unnoticed. I find them to be very versatile in both attack and defence and really wouldn’t want a team without one.

I would love to hear your opinions on the DLP maybe you never use one and It would be great to hear your reasons for not having one.

Do you have a role that you always use in every tactic that you make? Or maybe there is a role you would like me to look into and write an article about just let me know in the comments below.

I hope you have enjoy this article and thank you for reading.