Asians, they have produced a lot of quality players such as Kagawa, Honda, Heung-Min Son and others.

Today I plan to show you which Asian gems you might not know in FMM. Maybe after getting to know these players, you can try them in your last save?

Anyway, here they are: 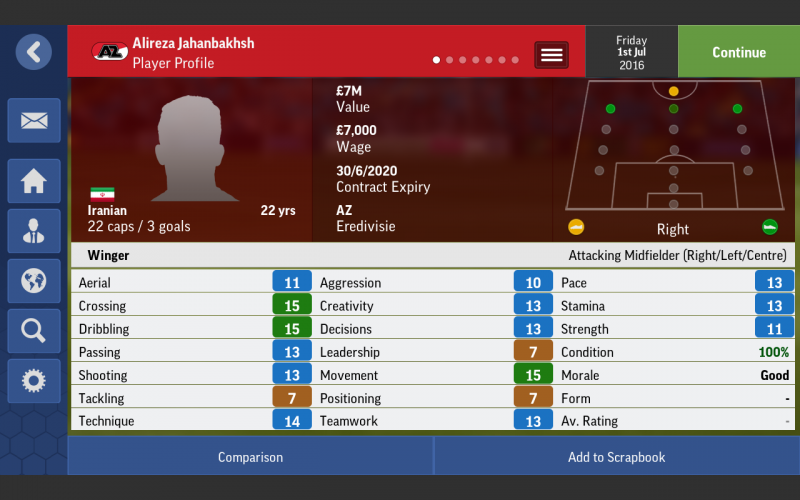 If you follow the Eredivisie then maybe you already know who is this guy is because in 2014 Jahanbakhsh was voted the second greatest young talent of the 2013–14 Eredivisie season, that's second to Memphis Depay if you want to know.

As a winger, he will make good use of his Crossing, Dribbling and Movement. Only being 23, he still has much room for improvements such as his passing and pace. Even though his Strength isn't the best in the world, that can still improve.

This guy can also play on both flanks of the pitch and also in the centre, making him a great substitute. He can deliver a good corner too and with that Crossing attribute, I'm sure he will make a lot of assists.

At his young age, he has already been capped and made some international appearances with Iran. If you're managing a big team in leagues like Scotland, Portugal, and Netherlands, this player could fill up the winger role for you. 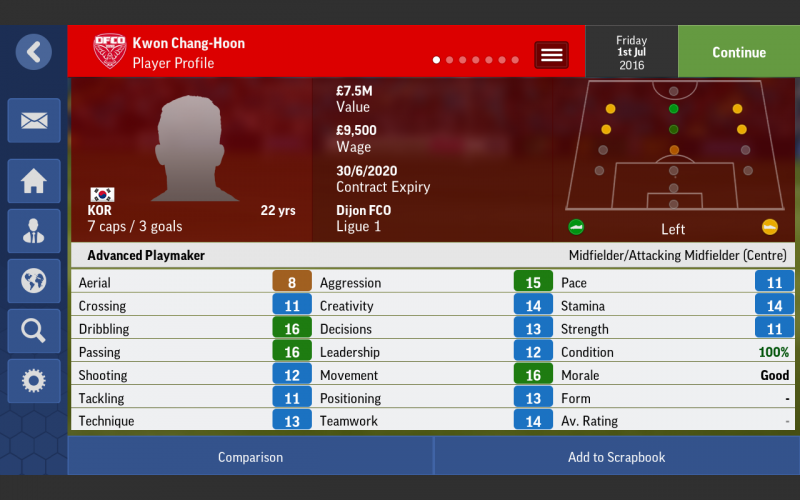 From the Netherlands, now we go to France to see the next player.
Kwon Chang-Hoon is a South Korean player that plays for Dijon FCO. He is new to Europe as his club bought him in 2016 from Suwon Samsung.

His best role is as an Advanced Playmaker, he is a good dribbler that can make a lot of intelligent runs with his Dribbling. A good passer of the ball with his Passing and other greens in Aggression and Movement. As he gets older, his Creativity, Stamina and Teamwork are going to improve. He has some bad things though, like his Aerial stats which only stands at 8.

If your team is looking for European qualification, this guy is worth trying. 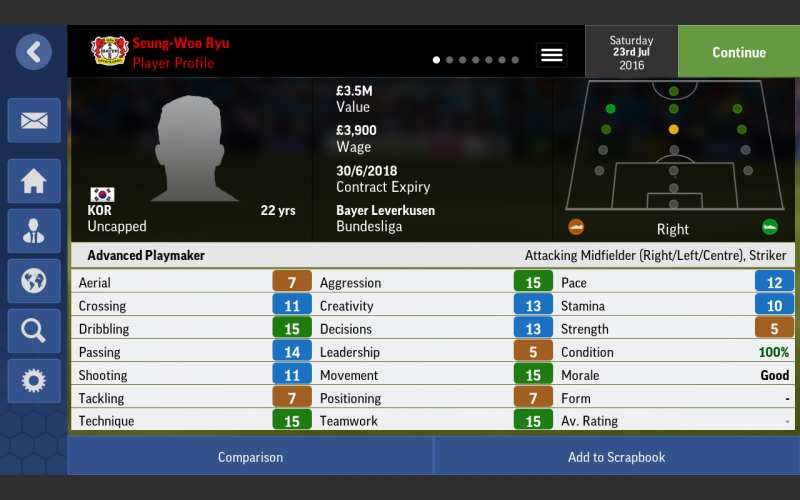 Another South Korean player on the list, Seung Woo-Ryu.

Another Advanced Playmaker, he has got some key stats for the role. Dribbling and Teamwork are really important for making opportunities to the forwards. He also has great Technique and Movement to pass the opponents' defenders in style. His Passing and some mental attributes can grow more as he gets older. The bad thing is, he doesn't really have good physical attributes. Aerial, Stamina and his Strength is a bit low for a top tier player.


A very versatile player, Ryu can play 6 positions effectively.Including a striker. So, if you can get around his low physical stats, he is going to be a great player for your side.His price is pretty affordable for almost every top-tier team in the game.

He maybe hasn't had his national team call-up at the moment but he will get it in no time.

In real life, Ryu returned to his hometown Jeju United. Do you think you can make him have a better career in Europe? Take a shot and bring this player to his best! 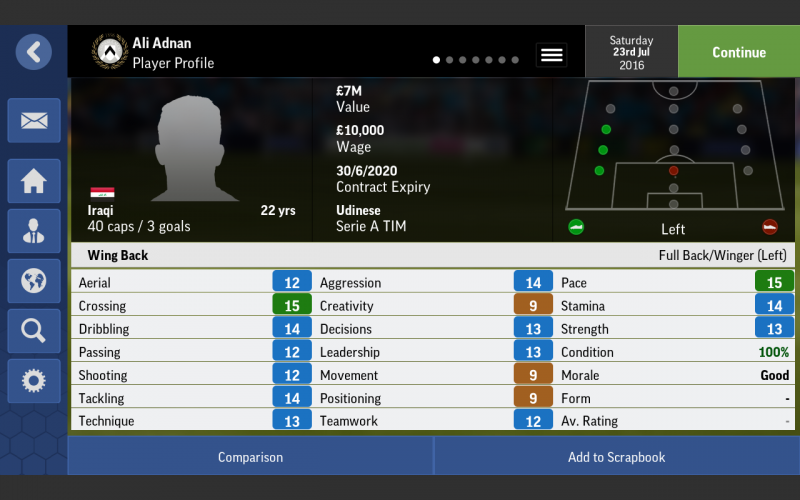 In second place, we go to Italy to find this gem from Iraq.

Ali Adnan has won the 2013 Asian Young Footballer of the Year award and is often referred to as the "Iraqi" Gareth Bale and even compared to the legendary Roberto Carlos.

Ali Adnan is a wing back, that means he must have good attributes in Pace, Stamina, and Crossing. He has that. He also has all the necessary defender attributes like Tackling and Aerial. This Player only 22 and can get much better later his career.

Also, Ali Adnan is not only known for his solid defensive presence, but also for his ability going forward and creating dangerous chances. He is a versatile player, he usually plays on the left side of the pitch as well as in the midfield.  He still manages to have good physical stats too. This makes him a great defender.

Ali Adnan is a great player yet affordable to have even when you manage big teams like Manchester City and Chelsea. 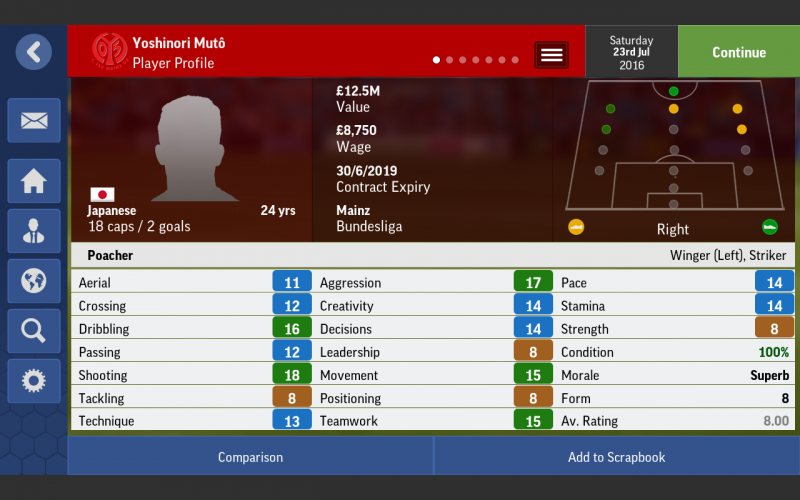 In first place, as you can see it is a striker from Japan.

Yoshinori Muto is an amazing marksman to have. As a Poacher, he has very good Shooting, Dribbling, and Movement stats. His physical attributes like Pace and Stamina is just shy from that green and in no time he'll improve those attributes.

If you think that he has too high Teamwork, you always can play him in a 2 strikers formation or even make him an Inside Forward on the left flank. He is lacking in physical strength, but when he has good dribbling and movement, he can go past the opponents' defenders well. This player is definitely dangerous in front of goal.

He won a lot achievements in Japan like Rookie of the Year, and was included in the J-league's Best XI.

He is a great player to have on every team and even he still hasn't reached his maximum potential. Can you make great use of him?

That is my Top 5 of less well-known Asian Players, I hope you enjoyed this article. Let me know what you think about these players. All feedback is appreciated.