Posted February 15, 2018 (edited)
National Team Watch - Jamaica
Hello Vibe, and welcome to this new mini-series we'll be embarking upon, where we'll be taking a closer look at some of World football's most exciting, interesting and challenging nations to manage In FMM18, and the reasons why YOU should begin a career immediately and attempt to take them to global glory! So, without prolonging this intro to the point where you'll be falling asleep in your chairs, let's get underway!
Competitions
Jamaica have the privilege of participating in a variety of competitions every couple of years, with each one sure to test different aspects of your tactical wisdom with the teams that are seeded in said competitions.
The Gold Cup 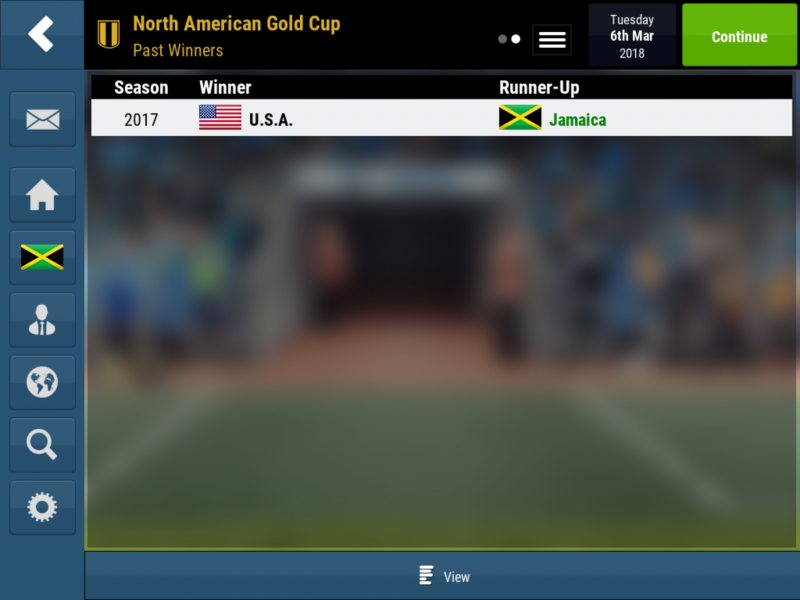 The North American equivalent of the European Championships, the Gold Cup pits the best teams from North America against one another in a classic group-knockout style tournament which sees the best of the continent come out on top. You'll face some Continental giants in America and Mexico, whilst minnows such as Costa Rica and Panama have the quality and confidence to put you and your group of Jamaicans to the sword. The mix of higher and lower ranked teams make this an exciting tournament that is sure to leave you on the edge of your seat in anticipation, and potentially nerves. Jamaica are yet to wrap their hands around the trophy, however with two runners-up medals to their name could you be the coach to lead them to Continental glory?
World Cup 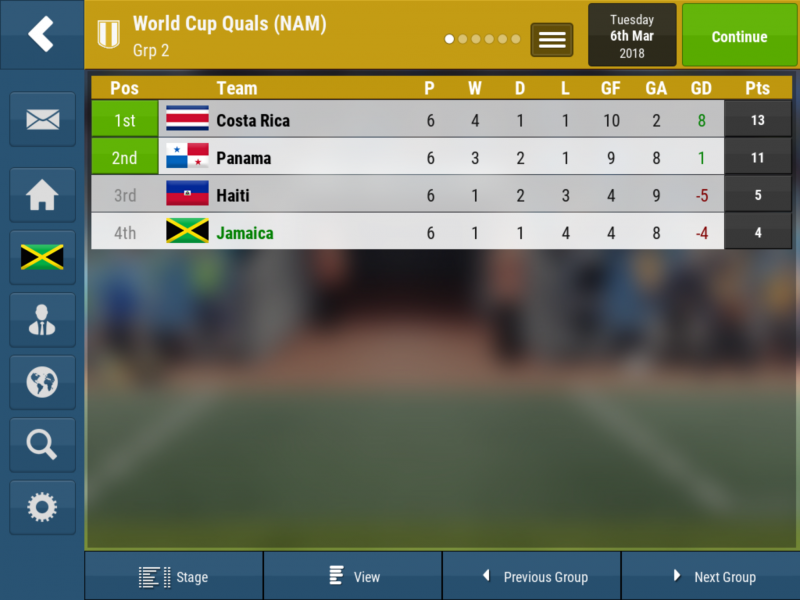 Please be aware this is not my awful management skills at fault, it is their generated results which left them rock bottom of their group. The world's most prestigious tournament, the World Cup is a hop, skip and a jump away from your grasp and you are very much in contention to qualify, if you're management skills are good enough to cope with the stressful demands of visiting difficult opposition every few months. The qualifying period is bound to be tense, and when the top 2 from each group go into a final showdown the are nerves are bound to crank up a notch as you strive to grab a place on the plane. With just a single qualification to the big stage in their history books, you'll be the man to pioneer a new age of success in the North American outfit.
They are the two major tournaments you'll have to worry about as Jamaica manager, with both being unique experiences that are sure to attract the most daring of managers. After exploring the nature of the two main challenges at hand, let's switch our attention to the Jamaicans and their international prestige.
World Rankings 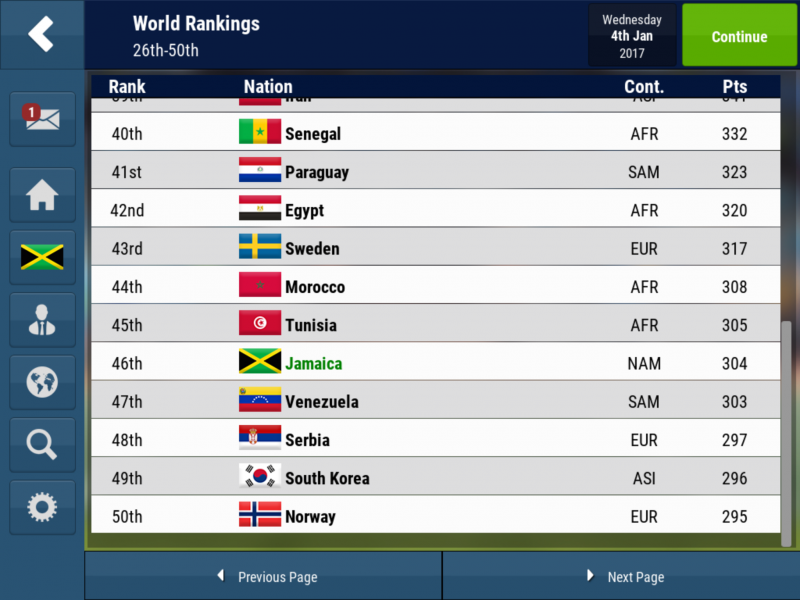 The clear quality of their current crop of internationals shines here as Jamaica sit at a tremendous 46th. The balance of well-renowned stars, young talents emerging from the rough and big results against big nations give Jamaica a respectable starting rank, however with a lack of games at the very beginning of your tenure don't be surprised to drop down a few notches before the bigger, better fixtures drop at your doorsteps.
We've viewed the challenges you'll face in the Jamaican hot seat. We've viewed the brilliance of your side and where they are ranked amongst the world's football elite. Now it's time to analyse the stand out members of their top quality squad to see who you'll be focusing on the grab you the best results.
Star Man 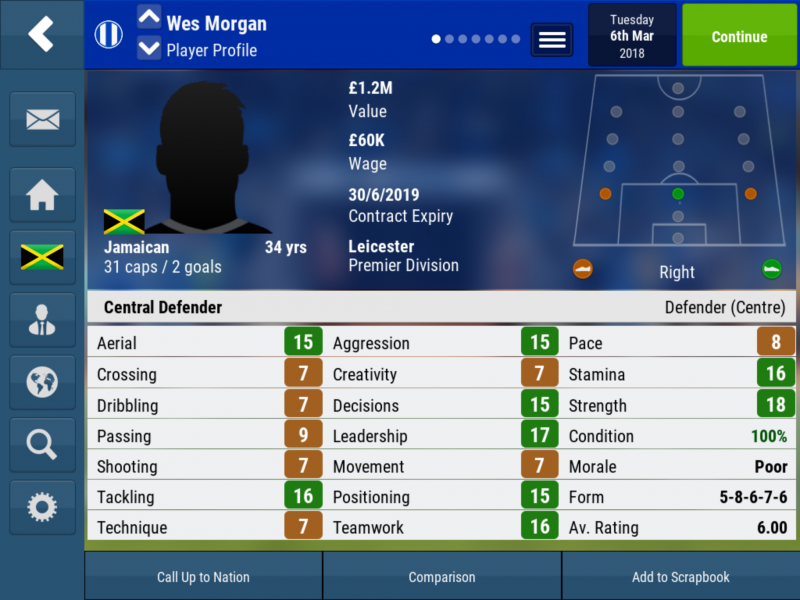 Captain Wes is the big name player in the Jamaican side with his Premier League exploits paving the way for his fame in his homeland. The 34 year old breathes stability and confidence in defence, and this is evoked wonderfully in his abundance of incredible core attributes, which include a scarily large 16 tackling which makes him a handful for any striker in the world, 15 Aerial which goes a long way in showing off his aerial prowess, and 18 Strength, making him almost impossible to knock off the ball. At 34, Morgan will likely last 3-4 more years at the top level with former champions Leicester before you may have to consider plumping for regens ahead of the Foxes captain, but by then you'll have had enough success to produce decent regens. Or that's the plan.
One To Watch 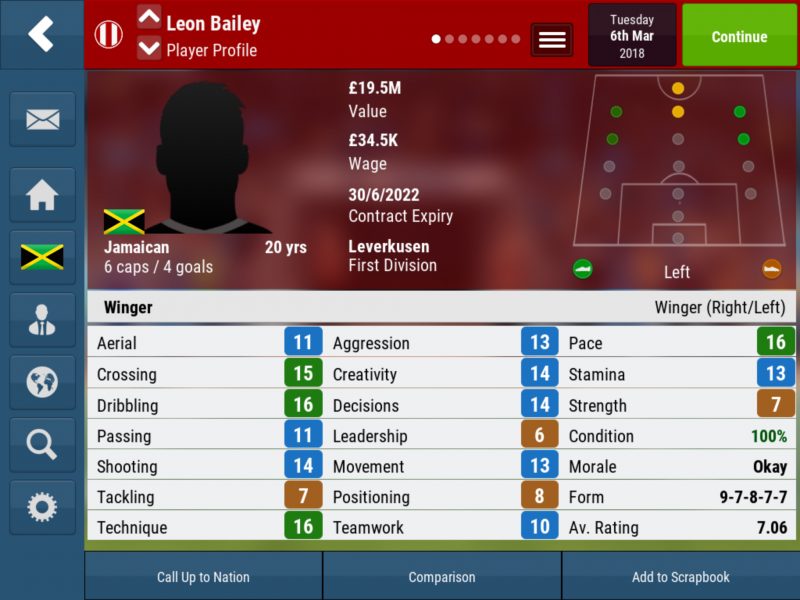 Leon Bailey is widely considered the golden boy of Jamaican football, and it's not hard to see why. At just 20 the winger possesses attributes that most wingers can dream of, with his 16 Dribbling making him a tricky player to keep track of on the field, and his darting 16 pace ensuring not many will be able to catch him once he gets on the ball. Linked with a move every summer without fault, Bailey will be your dangerman for the next 12 years at least and will be the key to any success you endure as Jamaica Manager.
The Verdict
Jamaica are truly an interesting nation to take the reigns of. Blessed with a rich group of talented and tricky footballers, they'll go far under your management, as long as you utilise their strengths accordingly. Achieve success and see your team fly up the rankings and quickly fill a trophy cabinet that is just waiting for some silverware. Fail, and you'll have wasted potentially a golden generation of Jamaican footballers. The margins are fine between the two fates, it's down to you make world beaters of the selection of players, and recreate the dreams of a nation.
Thanks for reading! Have you managed Jamaica before and achieved success? Or do you plan on taking another country to world domination? Remember to leave a comment and any suggestions on more nations for this series are appreciated!
Edited February 15, 2018 by mcandrew003
5