Posted February 21, 2018 (edited)
The Sweeper Keeper Debate
Hello Vibe and welcome to this new article where today we'll be discussing and researching, in a way, the odd yet interesting role that is the Sweeper Keeper. We'll be looking over what it is, examples of it in the real world, how different they really are and other things along those lines, before embarking upon a mini-experiment where well look to uncover the truth about whether it is really as good as your standard Goalkeeping role that so many of us choose to deploy. So, you've got the lowdown, and I think it's time to begin.
Examples Of A Sweeper Keeper In The Premier League 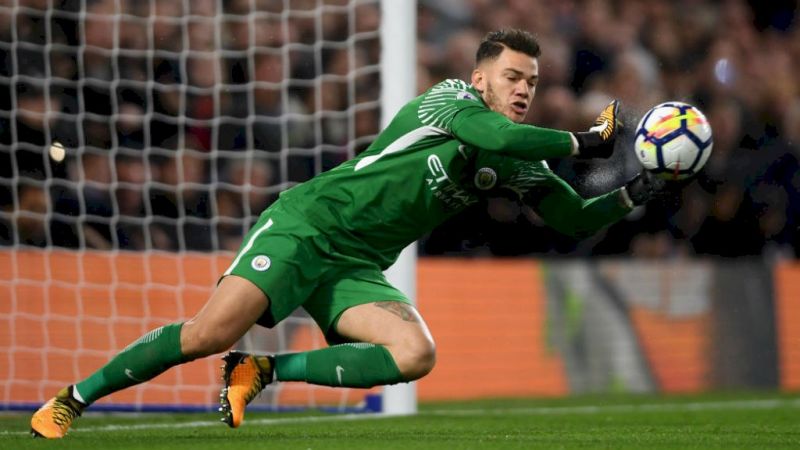 The Sweeper Keeper is not as rare these days as it was just a few years ago. The developing age of tactics we currently find ourselves amongst means more untried and somewhat exotic roles are making their way into British Football, and one such role is the Sweeper Keeper. An example of a goalkeeper who follows such a discipline is Manchester City’s Ederson. The Brazilian is rarely on his line and is not fazed by onrushing attackers, choosing to come out and meet them head on. He's practically considers a part of the defence at City, with him springing many attacks from the backline with long balls or well timed passes to wide players. 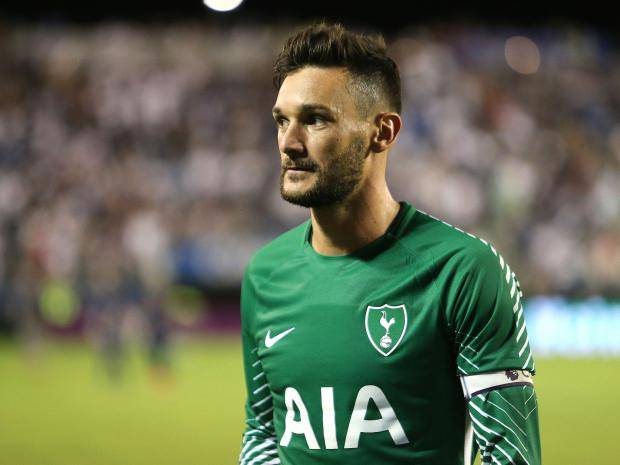 Another example of a goalkeeper taking on the mantle of the Sweeper Keeper is none other than Tottenham’s Hugo Lloris, who has, in recent times, been acclaimed for his rushing out and practically being Spurs’ eleventh man on the pitch. Of course, it doesn't always come off perfectly, as we saw in France’s game late last year, but despite that setback, Lloris has only grown stronger in the role.
Sweeper Keeper In FMM18 - What Is It?
Whilst I would try and explain the concept of the role in my own words, I feel that FMM might be a better source of information….. 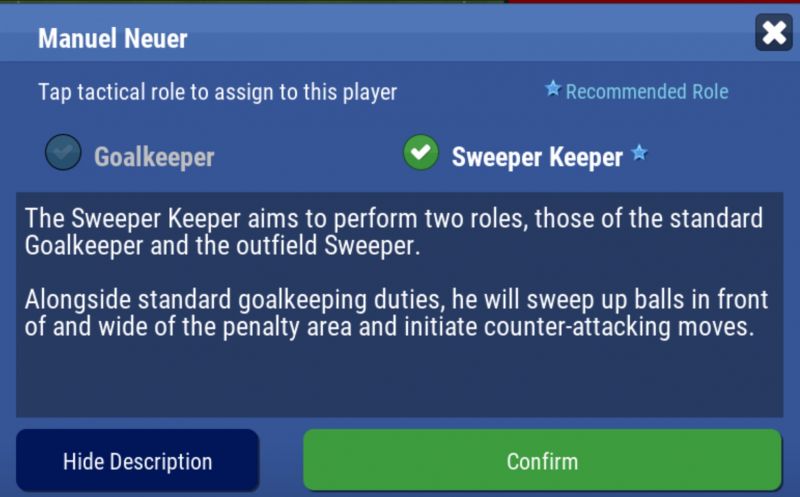 So the Sweeper practically has two roles to contemplate and put into action in a match. Like I said before, the Sweeper is practically an eleventh man and his actions at the back will ultimately help your side in their attacking moves, regaining the ball from low down the pitch to trigger an attack high up it. Your Sweeper will likely have to be relatively strong mentally to cope with the demands of the two roles, so that's definitely something to look out for, and ensuring he is a pacy player who can kick a ball is also integral to finding the perfect player to fit that role in your team. If you choose to use him, that is.
Putting It Into Practise - Sweeper Keeper Tactics
There are countless combinations you could conjure up that include a fully functional Sweeper as the variety of roles in FMM18 allows for some exotic shapes and instructions. With a Sweeper though,  certain things make more sense than others, as you'll find out below.
Like we said before there are certain things that make sense, and below are a few ways you could shape your defence if you choose to plump for a Sweeper.

Just pretend Neuer is a Sweeper, when I made that tactic I stupidly forgot the main thing, to make him a Sweeper Keeper! Anyway, moving on from my stupidity. This back 4, if you will, is a solid enough formation to incorporate a Sweeper into. The three at the back are a solid defensive base, and it looks like the lack of wingers will hurt the side surely? With a Sweeper this is less likely. Whilst full backs would of course be more suitable for this role, the Sweeper can collect through balls aimed at the wingers or strikers, or even push the line higher to fill in for a missing centre half who's chasing the ball somewhere else. 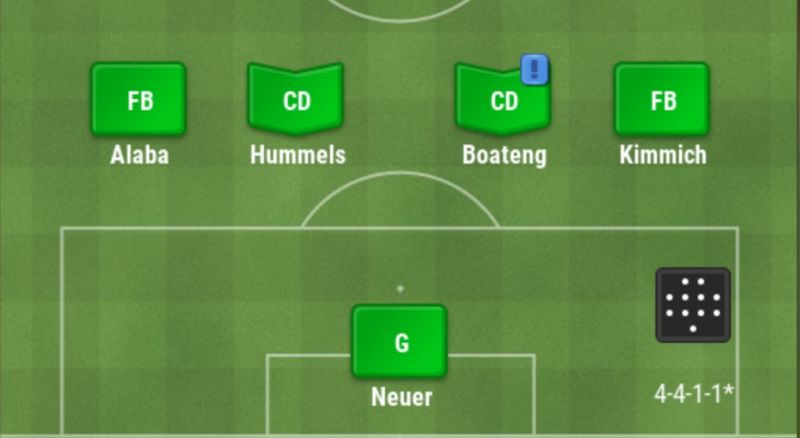 I did it again. Anyway, this formation is just as, if not more suited to a Sweeper as he can push up when the team is going forward and become a sweeping centre half at times behind the two main lads at the back. The fullbacks means there won't be as much responsibility for the Sweeper on the wings, and whilst that is something he'll have to look for, his main area of focus will be down the centre, where he'll collect and distribute accordingly.
Goalkeeper Or Sweeper Keeper?
The main debate segment of the article, it's time we look at the differences between the two roles. I'd like to say now there is no ‘better’ role, they both have their advantages and disadvantages and they both suit different styles of play. The Sweeper is more dynamic, he can do more than a standard goalkeeper but ultimately requires almost the perfect blend of physicals, mentals and technicals. Stamina and Pace have never been as important on a goalkeeper as they have on a Sweeper. On the other hand, a goalkeeper requires just a good blend of mentals and technicals, with the physical element of the job not as compulsory as a Sweeper. Finding the perfect goalkeeper is worth it though for a Sweeper as not only will he provide you with a couple of assists a season as well as keeping the back 3/4/5 solid and up to scratch with him lurking behind them, waiting for any slip ups. He does, though, leave the chance of being exposed by long shots or very, very pacy players when he rushes from his goal or is potentially dispossessed. It's up to you wether this risk is worth paying. A solid goalkeeper will be on the ball nowhere near as much as a Sweeper, and is very one dimensional in his strengths, but in the right team that is all you need from a keeper. So, both have different things they excel at and their respective weaknesses. Now it's time to test who performs better.
The Test - Sweeper VS Keeper
Before we begin it's important I point out that whichever role ‘wins’ isn't necessarily the better role. This experiment is to see the effects they both have on a team and allows you to form your own opinions.
The experiment will be ran as follows: I will simulate 4 seasons overall on 4 different saves. 2 saves will be with Bayern Munich with the standard Goalkeeping role equipped to their goalkeeper and renowned Sweeper, Manuel Neuer. The other 2 saves will also be with Bayern Munich, but Neuer will be equipped with his favoured Sweeper role. Why Bayern? Well, they have the best Sweeper on the globe, but coincidentally he is also one of if not the best Goalkeeper on the globe. I'll also be using Bayern’s default formation so there is no interference with any super tactics. So, using a player that fits both these bills is perfect for us. Anyway, let's get straight into the matter at hand and begin this experiment, before this article turns more into an essay than a handy guide!
Saves 1 & 2 - Neuer as a Sweeper
So in the first two saves, where we'll be simulating a season each, Neuer will be deployed as a Goalkeeper in the default Bayern formation, which is located directly below.... 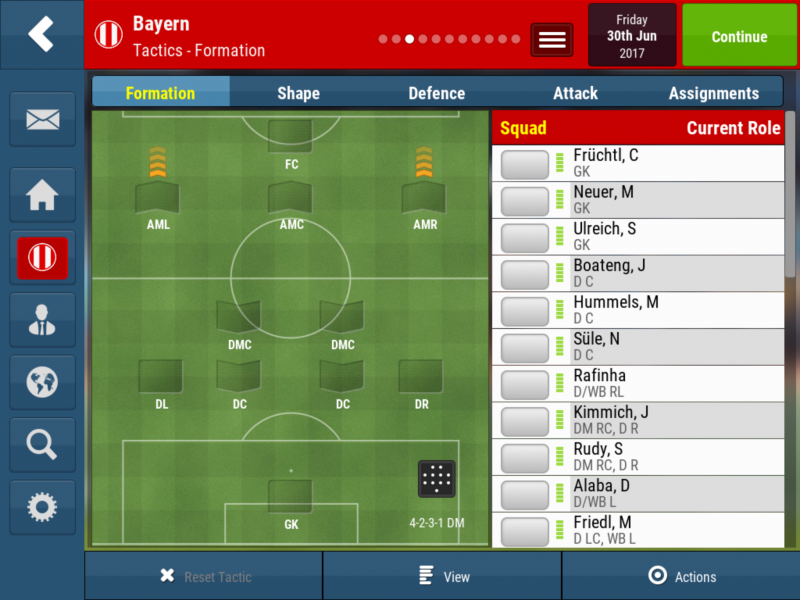 Standard 4-2-3-1 line-up for Bayern. Neuer has the Sweeper role and is ready to give Strikers nightmares not only in goal, but outside of it too. Let's magically go to the end of the season in both saves to see how Neuer and Bayern performed.
League Table
Season 1 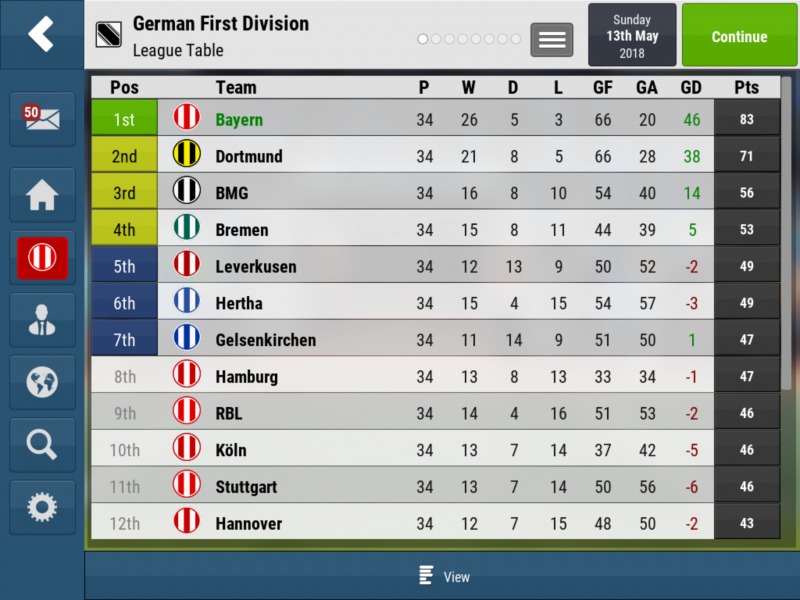 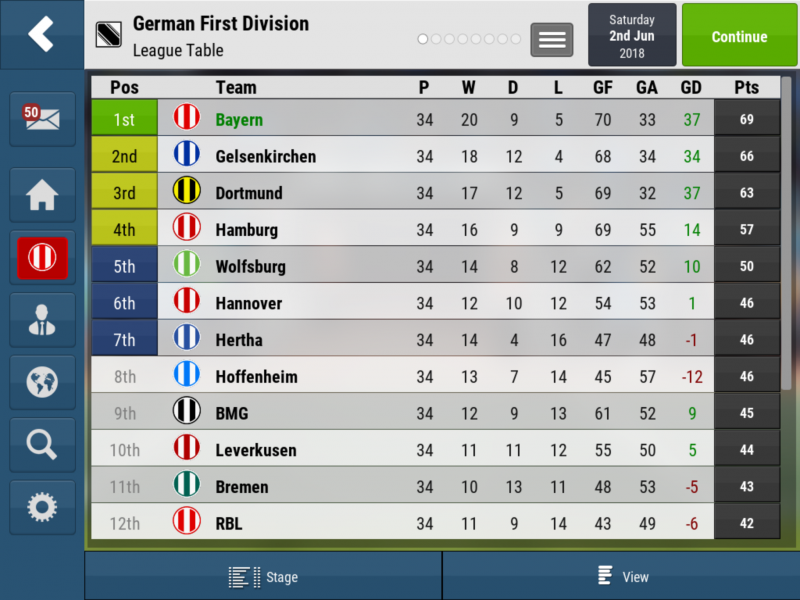 Two seasons as a Sweeper, two titles for Bayern. Neither of the two campaigns were overwhelming but a League title is a league title at the end of the day. Bayern managed to score a fairly large number of goals whilst keeping the Conceded number down, however it will be interesting to see how Neuer did individually.
Neuer Performance
Season 1 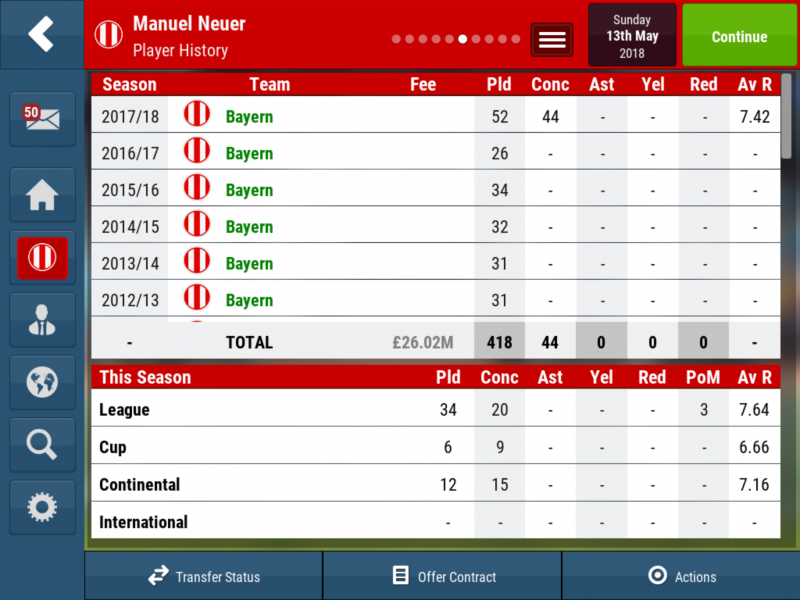 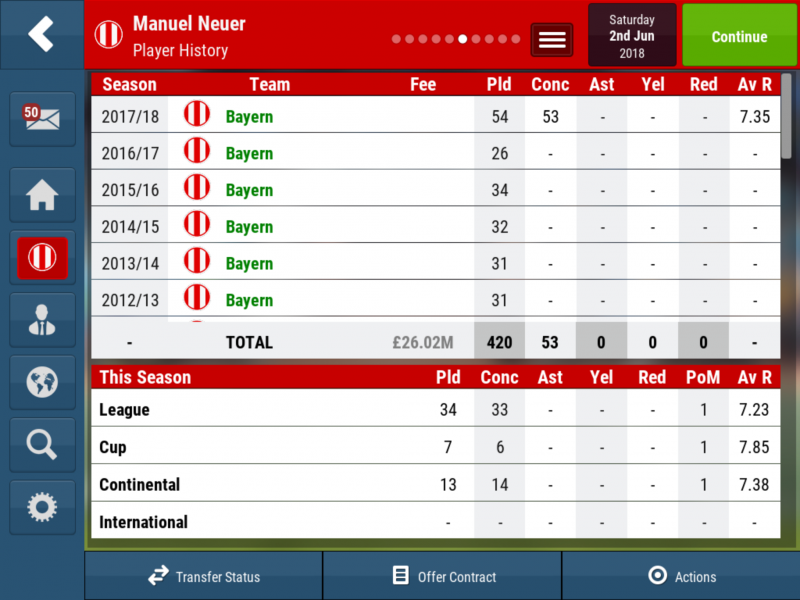 Largely differing seasons for Neuer in the two simulations. One season, in the first test, he was relatively solid for the Munich outfit, keeping a few clean sheets here and there. However in test two he conceded roughly a goal a game. Is it the Sweeper role that's been the catalyst in this poor form or an anomaly in the test? We'll be able to make an informed judgement soon as we look at Neuer as a standard Goalkeeper.
Neuer as a Goalkeeper - Season 3 & 4
So, another two seasons have been simulated, this time though Neuer's role has been switched to that of a Goalkeeper, not a Sweeper. Will we see a huge change in results or will they be similar to that of the Sweeper test? As like before, the formation is a 4-2-3-1.
League Table
Season 1 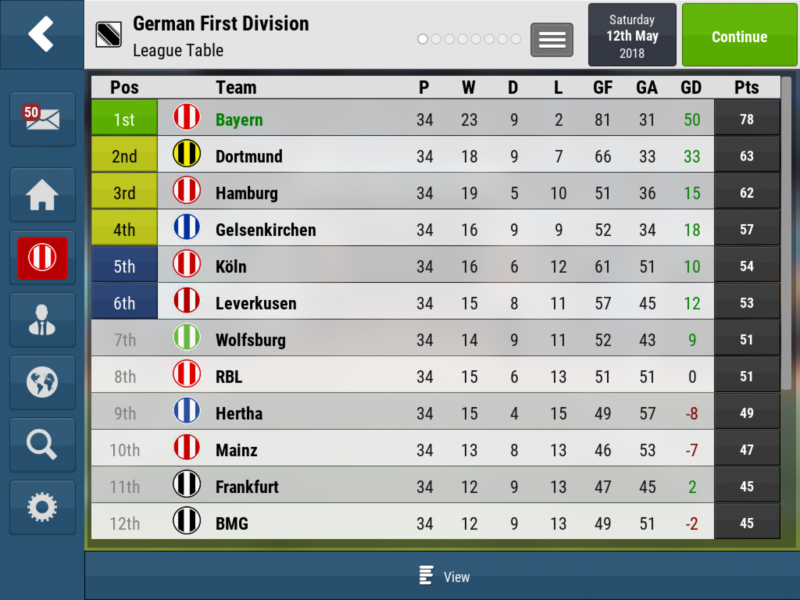 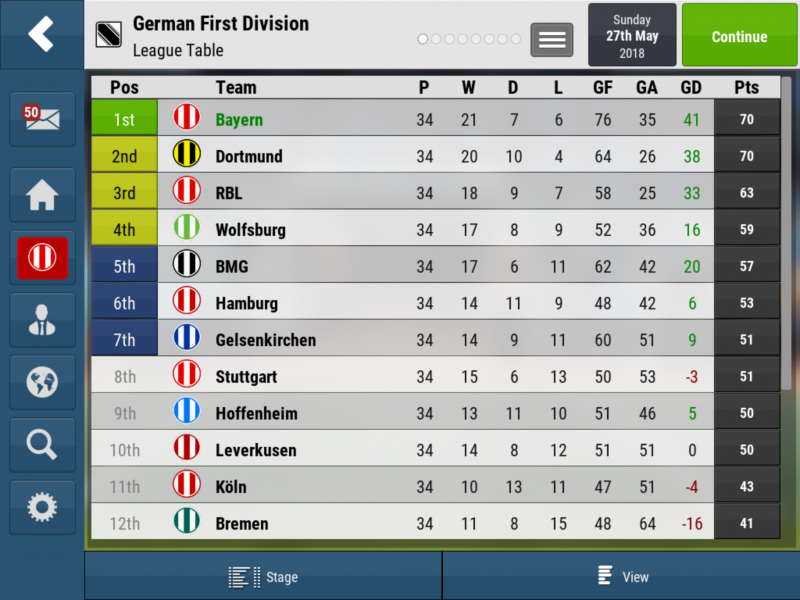 Two more League crowns for Bayern! They are truly unstoppable in the Bundesliga and it's gone to show here. Two solid campaigns, like in the last two tests, and a fair amount of goals scored yet the Conceded tab look strangely high for a normal goalkeeper of Neuer's ability.
Neuer's Performance
Season 1 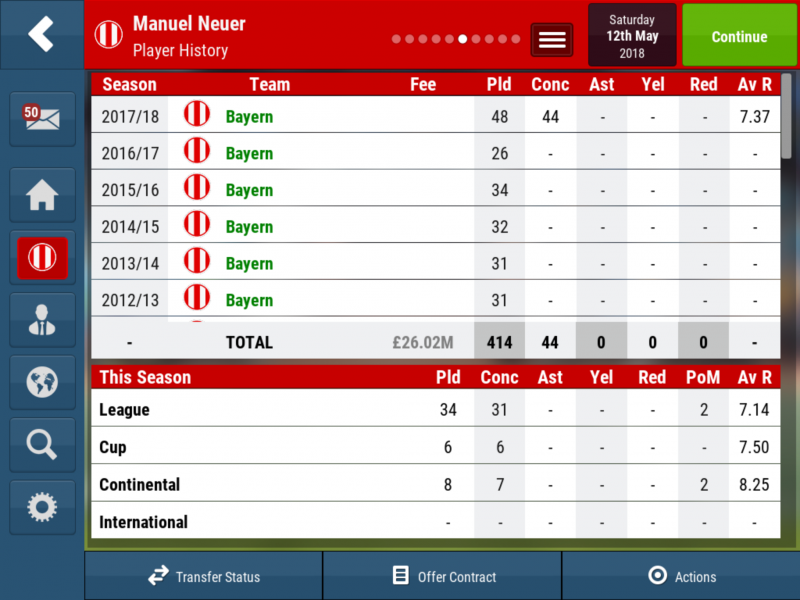 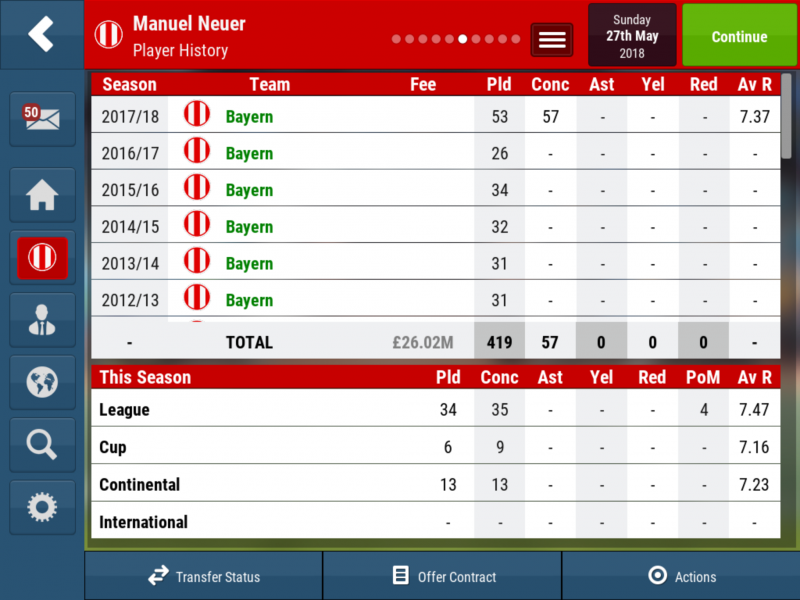 Manuel has conceded a lot! Surprisingly, as the role that's supposed to be more solid than the Sweeper, he's conceded a lot more! The fact in test 4 he conceded more than he played is worrying and, despite the Bavarian's league title triumph, they could have conceded lot less.
We've seen the proof, now lets compare the results from the two tests:
Comparing The Results
What Can We Take From This?
What an interesting set of results and general case study this has been. Like I've said before, no role is better than the other and this analysis of the Sweeper role is not to put you off it. In fact, it's to enlighten you on its strengths. One strength we can take is that the Sweeper actually conceded less goals than the Goalkeeper role in the test despite being perceived as the more 'risky' role of the two. The goalkeeper role did however, rather surprisingly, score a significantly higher amount of goals than the Sweeper. It's almost as if the roles have been reversed for this test (I assure you I haven't mixed them up

). The lack of assists from the Sweeper is strange, I usually observe my Sweeper grabbing a few a season, however perhaps he had something to do with the build up, considering the Sweeper - Bayern won more games than the Keeper - Bayern. So we've seen both roles have their strengths and weaknesses. I'd be very interested to see your opinions on the Sweeper role, aswell as if you enjoyed this article and any other thoughts you have. Thanks for reading!
Edited February 21, 2018 by mcandrew003
2