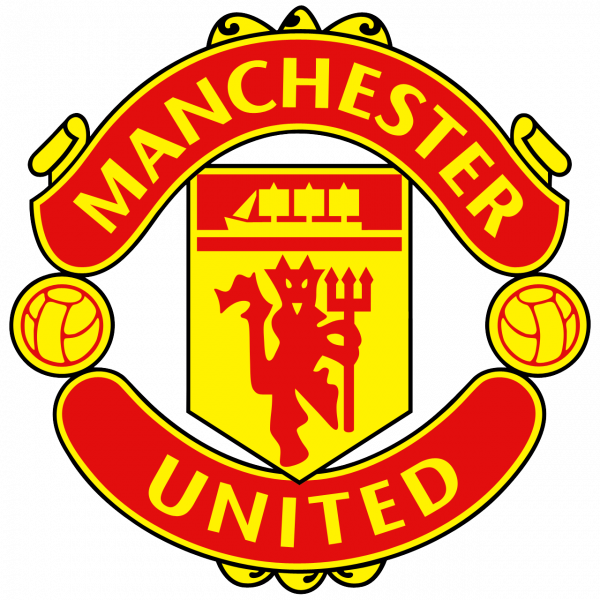 Football teams don’t get much bigger than Manchester United, although since the departure of Sir Alex Ferguson in 2013 the club has struggled to find the consistency it once made look so easy under the Glaswegians leadership. With current manager Jose Mourinho receiving heavy criticism for his defensive style of football in a club that craves a free flowing attacking style, now is the perfect opportunity to step into the dugout at Old Trafford. 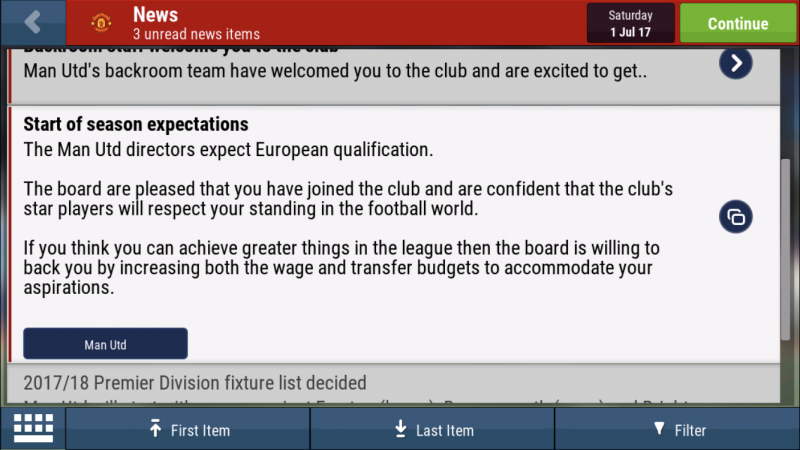 The board of directors priority target this season is European Qualification, preferably to the Champions League. Although with the squad at your disposal a first league title since Fergie left is a more appealing target. 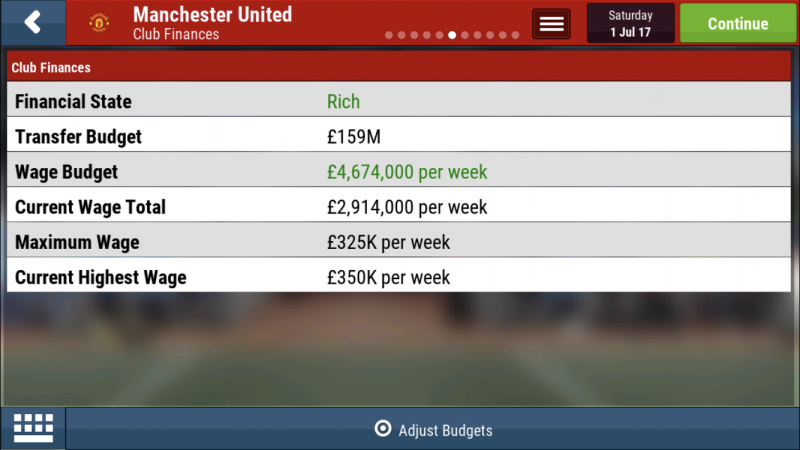 A cool £159 million is at your disposal, and with a bit of tinkering with the wage budget that can go up to £200m+

More than enough to make your shrewd transfer dealings.

I’d highly recommended a variant of a 433 formation, mainly due to the fact you’ve only got Lukaku and Rashford as strikers with Ibrahimovic being well past his best ingame. Here’s a version I’d recommend:- 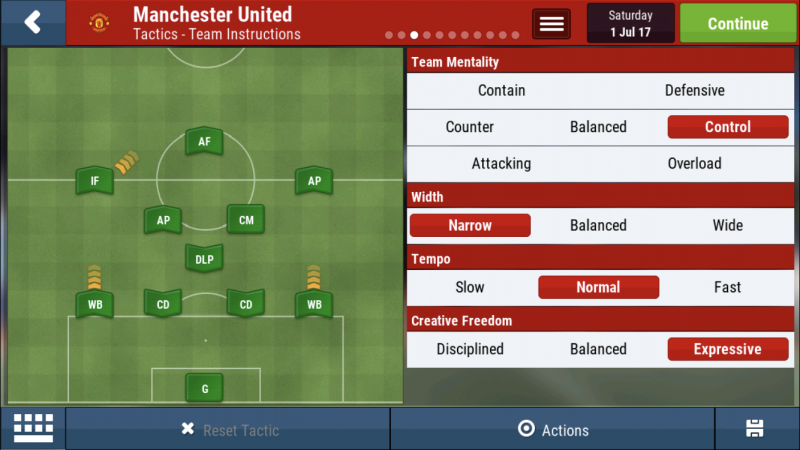 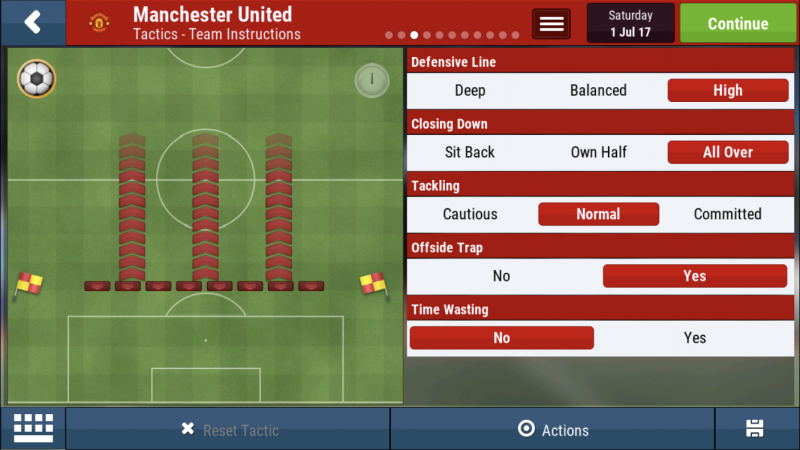 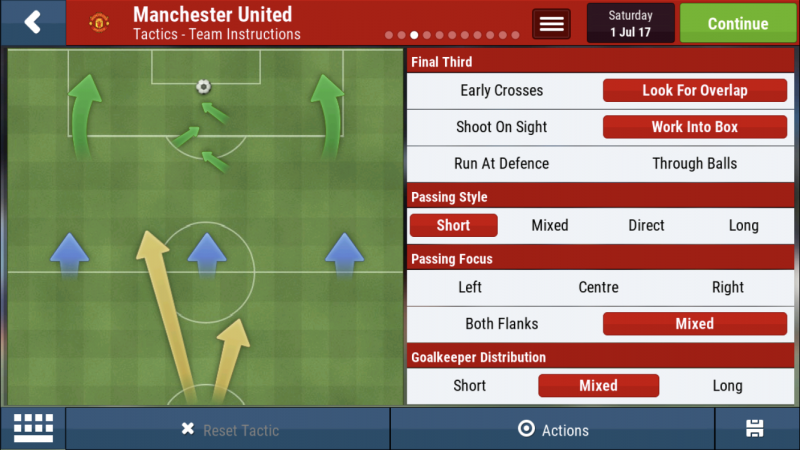 A flat back four offers you the best protection and along with the DLP in midfield it gives you a resilient defence which even the best of attacks will struggle to break down. Further forward we go with a midfield combo of an AP with a CM followed by an IF on the left wing, AP on the right wing and even though I’ve got an AF upfront I have kept that open to change.

Going with short passing to make use of the triangles in the formation and this in turn gives you a tiki-taka-esque style of play.

For outgoing transfers I’d personally sell: Marouane Fellaini, Matteo Darmian, Daley Blind, Marcos Rojo & Chris Smalling, whilst also trying to loan out Scott McTominay as to give him some much needed game time outside the pressure of Utd.

For Incoming transfers I personally like the look of both our recent signings in real life, Fred and Diogo Dalot. Dalot develops really well in the game from what I’ve heard and Fred can come in to effectively free up Pogba. We’re also crying out for a new left back and Fred’s compatriot Alex Sandro can be bought ingame for around £85million which still leaves plenty in the bank for a new centre-back. If you canget him, go for PSG’s Marquinhos as he develops into a truly elite player and would Marshall your defence for the best part of a decade. Other options include Lazio’s Wallace who is a cheaper alternative.

GK: David De Gea, speaks for himself. The best GK in the game hands down.

RB: Antonio Valencia - You can still get a couple of years from him whilst Dalot is developing. A solid choice

CB: Eric Bailly/Marquinhos - This would be a classy pairing if it ever came into fruition

CDM: Nemanja Matic - A quality player, and when Timothy Fosu-Mensah returns from his loan spell he could act as his understudy

CM: Pogba/Fred - Pogba can be unshackled here with the acquisition of Fred. Andre Herrera would come in as rotation

LM: Alexis Sanchez/Anthony Martial - Torn between who starts, I’ll leave that up to you

RM: Jesse Lingard/Juan Mata - Playing an AP on the right side gives you a couple of decent options in these two

ST: Romelu Lukaku - speaks for itself. Marcus Rashford could come in for cup games and against the easier sides of the league.

Thanks for reading, I hope you’ve found this guide informative. Disagree with something? Let me know in the comments below