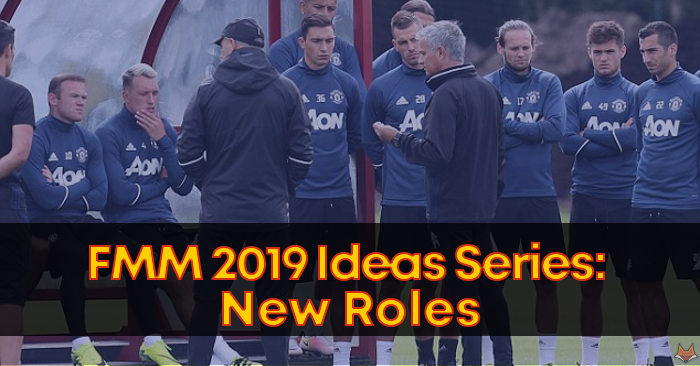 Following on from our first and second articles FMM19 Ideas series: Staff and FMM19 Ideas series: Set Pieces written respectively by @Foxy and @Ashez I’d today like to discuss the option of new player roles in FMM19. Something that many people are calling out to be introduced in FMM19 are even more player roles, and here I’ve got a potential five new ones that I would personally like to see added into the game.

Carrilero﻿ - or the ‘shuttler’ as it is nicknamed by many. Normally used in a midfield three or in a narrow diamond formation the Carrilero is best described as being inbetween a box to box midfielder and a defensive midfielder. The main difference between it and a box to box midfielder is that the carriler﻿o won’t advance into an attacking position as frequently as his main duty is to cover space. When the fullbacks go on a run it’s the carrilero’s duty to cover the space left by them, but they need to be positioned in such a way that he can still defend the central channel and the flank. The Carrilero role should be given to a tactically intelligent player with the stamina to cover a huge area for the full 90 minutes. William Carvalh﻿o, Moussa Dembele or Chelsea’s N’Golo Kante are some of the players I believe to be capable o﻿f﻿ ﻿﻿playin﻿g the role.﻿﻿﻿﻿ 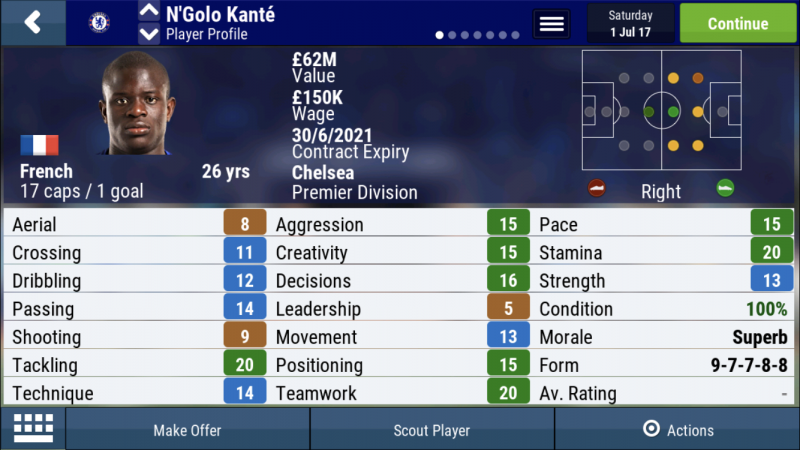 Regista﻿ - think of a regista as a more dynamic option than a Deep Lying Playmaker, asked to perform the same tasks i.e dictate the tempo of the match with short and long passing from a deep midfield position. A DLP will usually hold their posistion whilst spraying passes across the pitch and effectively doubling up as an anchor man by intercepting passes from the opposition, think Xabi Alonso, Andrea Pirlo or even Michael Carrick. Like the DLP the regista plays from a defensive midfield posistion but instead of holding that position like his counterpart, he is also asked to press op﻿ponents when out of possession. However he will rarely venture into the opponents half, instead he will cover the central space in front of defence and up to the halfway line. Ideally suited to a 433 formation the Regista is perfect for a high pressing team that likes to dominate po﻿ssesion. A player with good passing and techniq﻿ue is a must whilst high aggression, positioning and stamina are secondary attributes. Players suited to the role in my opinion are Joshua Kimmich, Emre Can & Morgan Schneiderlien. 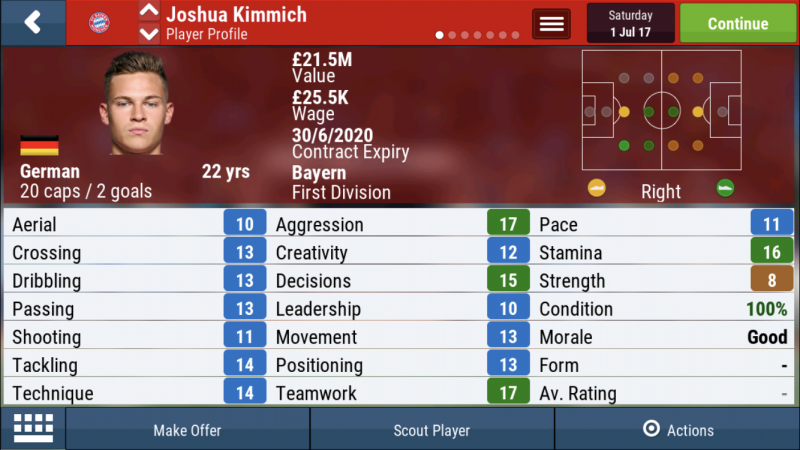 Enganche - a role used in the AMC position and could be described as the teams main creative outlet. He is a player that sticks to his position and acts as a pivot whilst his team move around him. Unlike the trequartista who goes looking for pockets of space, the Enganche is a more stationery role and acts as more of a focal point instead of moving around. Suited to a more direct and fast kind of football as he simply has no defensive responsibility, therefore he will stay up the pitch and look to thread killer balls through the opposition backline. Key attributes include passing, technique, decisions & creativity. Players I believe who could play the role include Luka Modric, David Silva & Paulo Dybala﻿ 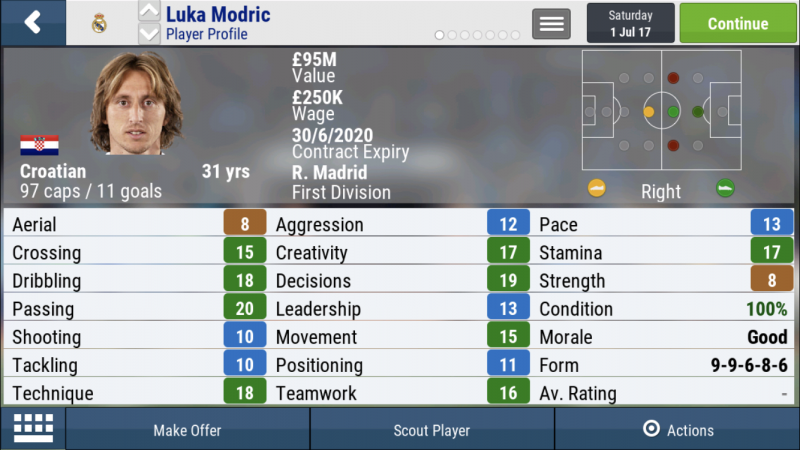 Half Back - the half back is a player that is best described as being inbetween an aggressive sweeper and a defensive midfielder. With a half back the central defenders will push higher up the pitch while the half back itself drops deeper than a standard defensive midfielder and in addition to his defensive duties looks to offer an outlet for recovering possesion when the attacking play has broken down. Furthermore, a half back gives the wingbacks much more freedom in attack as he will drop down as a makeshift central defender to form a back three whilst they go on an attacking run down the wing. Key attributes for the role include Passing, Technique, Positioning, Decisions & Teamwork. Whilst secondary attributes include Aerial, Tackling & Strength. The most suitable players i can find for the role are Sergio Busquets, Nemanja Matic & Morgan Schneidrlien 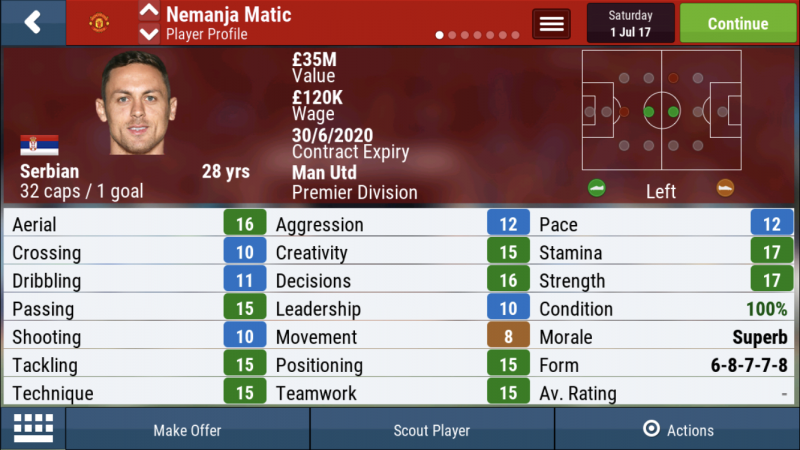 Inverted Winger - The inverted winger is similar to the inside forward but can only play on the LM/RM line. The main difference between the two is that an inside forward will cut inside towards the box and pair up with your striker(s) whilst the inverted winger cuts inside towards the area where the AMC would play. From that area he will be looking to play through balls or go for a long shot on goal and as he cuts inside he will be freeing up space for your wingbacks to overlap. So it’s safe to say the role is best used with wingbacks in the side. Key attributes include Dribbling, Creativity, Decisions & Movement. Secondary attributes include Passing, Technique & Teamwork. Suitable players include Emil Forsberg, Hakim Ziyech & Henrikh Mkhitaryan. 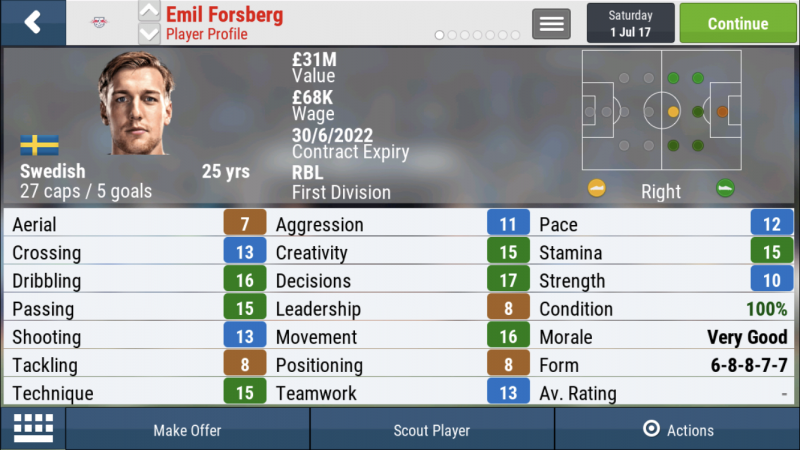 Which player roles would you like to see added into FMM19? Let us know in the comments below