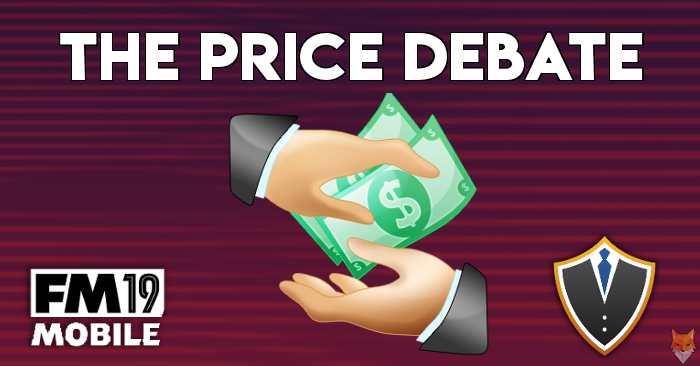 We now know that FMM19 will be released on Friday 2nd November and that it will likely cost the same as last year at £8.99 or 9.99 euro. The price the game costs is often up for debate here on Vibe in the lead up to a new release and I thought I would just jot down a few of my thoughts on the issue.

One thing to get out the way early is that there are ways to save money on the game if you act quickly by signing up to some of the questionnaire apps that are available and give you credit to spent in the app stores. I have been using the Google Opinion Rewards app since the beginning of September last year and over that time I have earned £10.52 for answering 69 surveys (a bit more than 1 a week) so that is about 15p a time which doesn’t sound much but most surveys take about 30 secs to complete and as it stands FMM19 is going to cost me about £1 as I have spent some of that credit already. You can get similar apps for iOS as well and I think it is something worth looking into as even though you may not save a massive amount before FMM19’s release anything is better than nothing.

I think one point that can often be missed is the fact that at least in my opinion anyway FMM19 is a true computer game and not just an app which may sound obvious but I often see people describe FMM as an app. It is far more detailed and immersive than your standard mobile game and so I don’t think it can be put in the same bracket as something that is free to download or costs a few pence. We are all used to going onto the app store and downloading an app for free or for a few pence and a lot of mobile “games” work on a freemium model. That means you can download it for free but to progress in the game quickly you need to spend money on extras that may otherwise take hours to unlock and without them you are stuck waiting to continue the game. FMM is different in that almost all aspects of the game are available from the off and you can play as long as you want without needing to wait to earn coins etc, we can also start in any of the leagues and with any club we wish straight off without any extra payment. The exception is international football which takes a bit more effort or 99p to unlock but things like sugar daddy, no loan restrictions etc can be unlocked after a few hours of play especially if you start with one of the easier teams to manage. If you compare FMM to its PC big brother it is only the fact you can’t start in international management without unlocking or paying that is the difference although FM does come with a free PGE so you can give your chosen club a sugar daddy that way of you wish.

That isn’t to say SI aren’t trying to squeeze a few more £££ out of us all with a myriad of extras or shortcuts that can be purchased, some which save you time in the game such as sugar daddy or a tutor to help a coach pass his exam first time and some which add new in game scenario’s and of course the IGE. I believe the complete package of extras and unlockables comes in at around £15.99 but in the end it’s your choice if you want to pay that or not. One area I feel SI could be a little more generous though is the IGE as they are asking the same price for that as the full game costs! Personally I have no interest in editing my saves unless it is for an experiment but I know that for many people they do like to use the editor for whatever reason and with the create a club feature being pretty basic I can see the appeal if you wish to make a club of your own with perhaps your mates in the team. To charge the same price as the game though seems crazy to me and unless the price has changed it is more expensive then the IGE that can be bought for the PC version which to me makes no sense. I think that at the moment SI have the balance right with the unlockables and I would hate to see them add many more especially extra leagues which need to be unlocked or payed for as I think all teams and leagues should be available straight away.

The other big bug bear for many of us is that we are asked to pay £8.99 for a product that if it follows the last few years is essentially unfinished and will likely need a couple of updates to fix problems in the game within the first few weeks of release. Just take a look at our bug reporting thread and you can see the myriad of problems that this year’s game has had and in some cases still has. It is hugely frustrating but I think we have to look at were we are in the list of priorities for SI. FMM19 will cost £8.99, FM Touch 19 will be £21.99 on Steam and the full game is listed with a pre purchase 10% discount on Steam at £34.19. The PC version will far out sell any other version and bring in much more money so that is always going to get the most development time with a big team working on it and of course FMT is essentially the same game so much of the development overlaps with the full game and now it is on Switch probably sells very well too. That leaves FMM at the bottom of the pile and will have a much smaller team working on the game and a much shorter development time which shouldn’t excuse a buggy release but at least goes some way to explaining why it happens.

The one thing that will ultimately lead me to buying the game again is that for all its faults I love it and I get far more than my moneys worth out of it and in no small part thanks to Vibe. If I go to the game status page on my current Atletico save I can see just how much value for money I have got by looking at the game time. 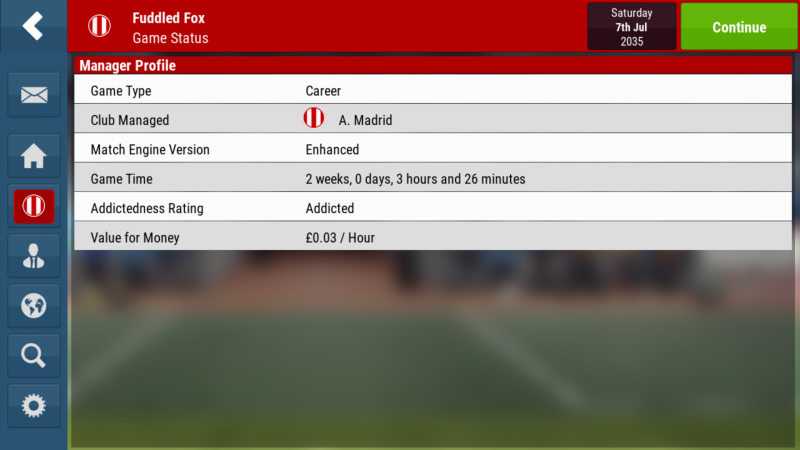 You need to take that figure with a pinch of salt as I have a tendency to leave the game loaded on my tablet and going off for an hour or so and doing something else but still if you half that it is still only 6p an hour or 9p if it is quartered. This isn’t the only save I have had with my DT that lasted 8 seasons and then test saves, saves for articles and various short Vibe challenges I have essentially got the game for nothing when you consider the amount of time I have put into it and despite a few bugs and areas of the game that could have just a little more depth I have loved it and will be back for more next year.

This is just my thoughts but I would love to hear from you guys. Will you buy the game next year or do you feel the game doesn’t offer you value for money these days and you may give it a miss? You can also vote on the polls below.