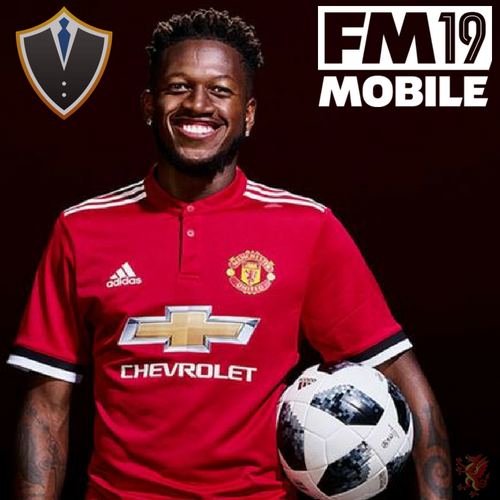 Hello Vibe, and welcome to Tactical Showdown Episode Three. If you haven’t seen episode one and two, I highly suggest you give them a read - Episode One - Episode Two. In this episode I will be showcasing Manchester United’s new Brazilian summer buy, Fred, and what he can bring to the table in the 2018/2019 season.

A £52million summer arrival from Ukrainian side FC Shakhtar Donetsk, Fred promises to inject some energy and mobility into a lacklustre United midfield. Fred is one of those modern types of central midfielders who excels at defending, passing and dribbling. In the FMM world it’s hard to choose a suitable role for Fred, he’s too mobile to be a “Central Midfielder” and he doesn’t have the aggression to be a “Ball-Winning Midfielder”. In my own personal opinion he’s a defensive “Box to Box Midfielder”. I say this because he will contribute greatly to both attacking and defensive phases, but a goalscorer he certainly is not. In an ideal world, some new midfield roles is what’s needed and the “Carrilero” role would in my opinion be perfect for Fred.

Now let’s have a look at Fred’s attributes and where I think he will play in the Manchester United lineup. He’s a bit of an all rounder, with 13s/14s across the board. His main weaknesses are his Aerial ability and his Aggression on the pitch, whilst his strong points are his Technique, Dribbling & Decisions. 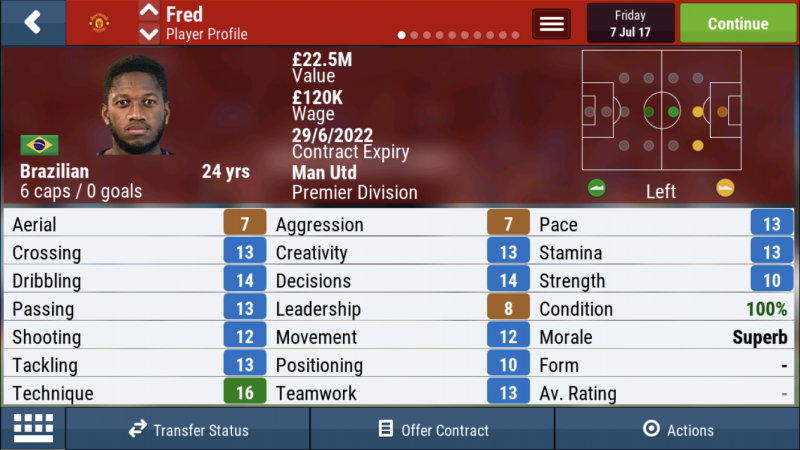 In my eyes United will line up in a three man midfield with Matic playing a deep central role with Pogba on the left in his preferred position whilst Fred will take up berth on the right side of the trio. 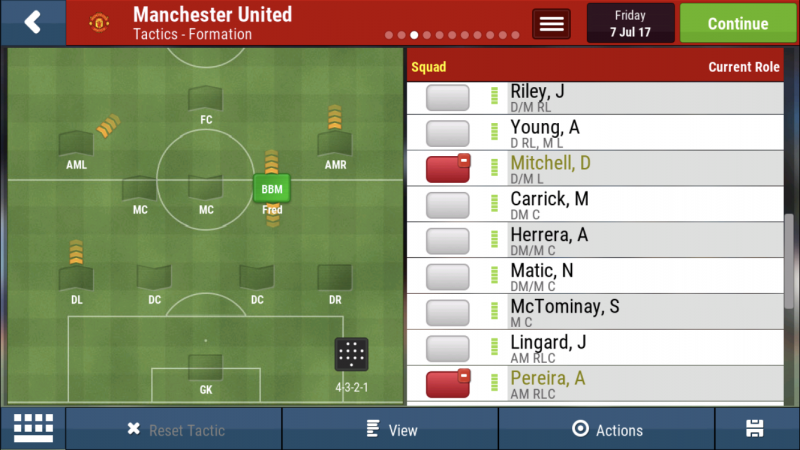 £35million is what it took for me to sign him in-game (you overspent Woodward you fraud!!) and I reckon you can get him cheaper than that as I rushed to buy him for the purpose of this experiment.

As for results, well, they were very good. United convincingly won the Premier League with a huge 97 points, 12 points clear of Manchester City in second, and a huge 25 points clear of Chelsea in third. They scored a huge 107 goals over the course of the season which I believe is record breaking, and amassed a goal difference of +83. It’s safe to say that I’ll be keeping my job after that showing! 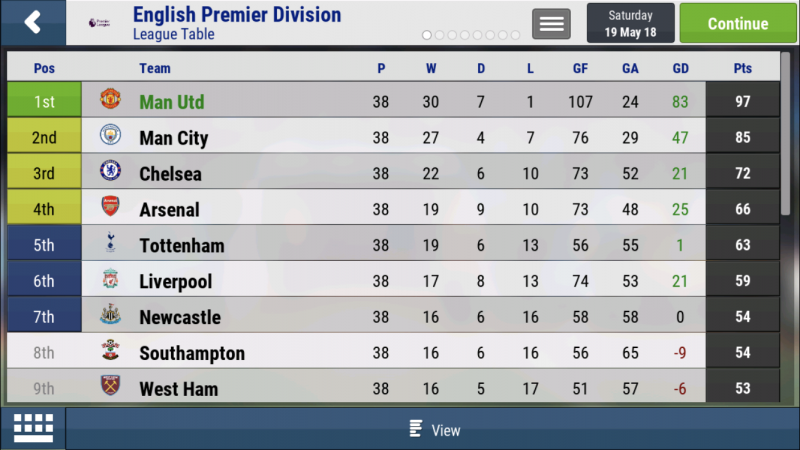 One of the main positives of Fred’s arrival at United is that most folk believe he can unshackle Paul Pogba and allow the Frenchman to do his thing further up the pitch. So how did that relate in game? Well Pogba had a blinding season for the Red Devils, and scored 23 goals in 40 appearances, whilst assisting another 18, in what is safe to say his best season to date by a country mile. 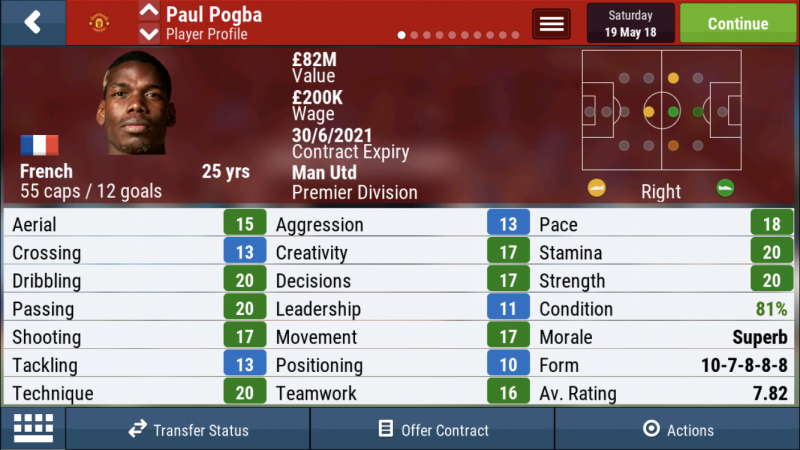 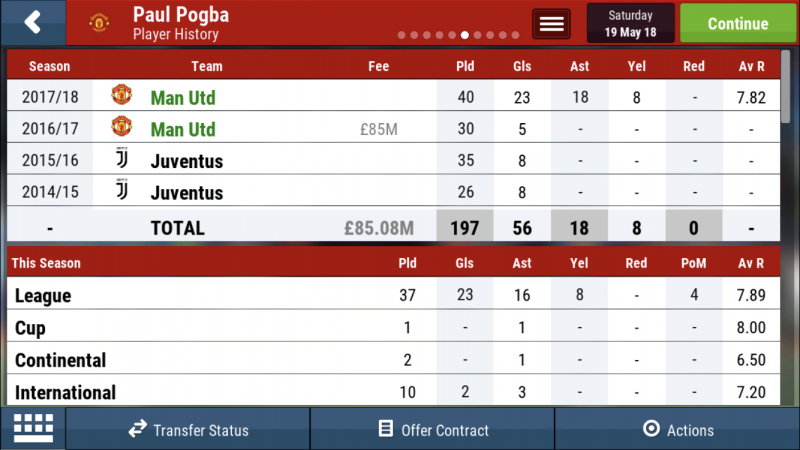 As for Fred himself, how did he get on? Well first off, his attributes have grown in vast amounts, with all but 6 of his attributes now green. His Aerial and Aggression remain his weakness, but other than that there isn’t a single flaw to his game with his shooting bordering on 15 too. He’s turned into the complete midfielder and one whom United can rely upon for years to come. He totalled 39 appearances throughout the season, with 37 of those coming in the league itself. He scored a more than decent 9 goals whilst assisting another 11. His Average Rating of 7.56 is not to be sniffed at considering his role in the side and the games lack of proper judgement on player ratings. 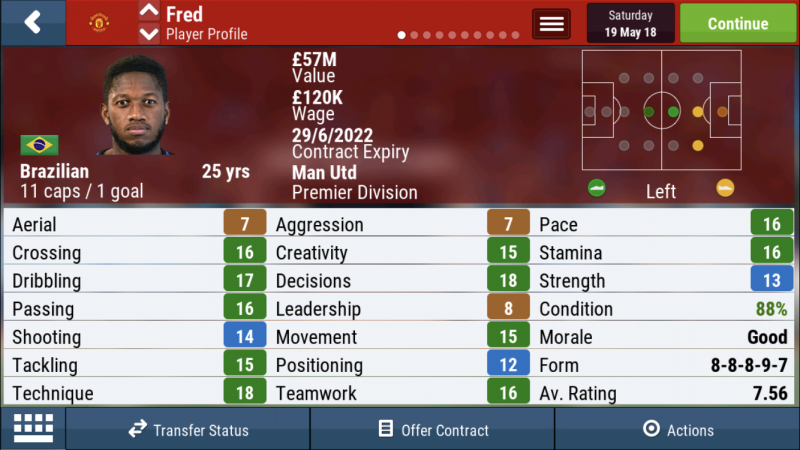 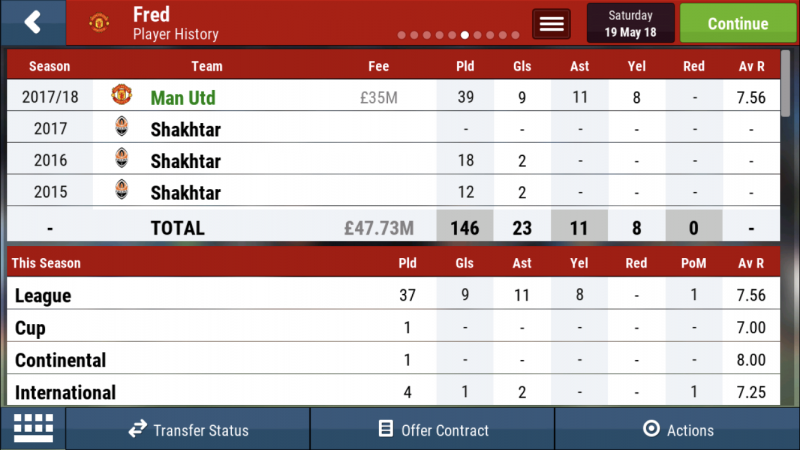 All in all, Fred’s transfer to Manchester United has been a success, but how will his real life counterpart do? Will he achieve the same greatness as his handheld alternative? Let me know what you think in the comments below. As always Vibe, thanks for reading.