Liverpool went into the summer window on a decent high after reaching the Champions League Final, unfortunately they lost that final in dramatic fashion but the season will be remembered for a long time by fans. Reaching that final had an added benefit however as it helped propel us back to the elite table of European football which the club has taken advantage of by going on one big shopping spree. Historically we've had false dawns before and failed to capitalise on the situation but not this time as we spent the big bucks in an attempt to not only cement our position but actually push on from it.

You can however sign poorly and waste vast sums of money on the wrong players for your system or ones who simply aren't good enough, like for example Manchester United. They've spent stupid money on defenders yet they have no centre backs, their midfield is unbalanced yet worth the best part of two hundred million and their £500k a week striker looks lost. But why do I feel Liverpool haven't made these same mistakes this time? Our transfer history in recent years isn't the best with big name flops like Benteke, Balotelli and Markovic, however this time I'm certain we've signed as perfectly as we could have.

Liverpool's squad has holes like most squads and we went into this window determined to not only fill these holes but to fill them with a player perfectly suited to us and in this article I'll be showing why FMM agrees with my opinion. 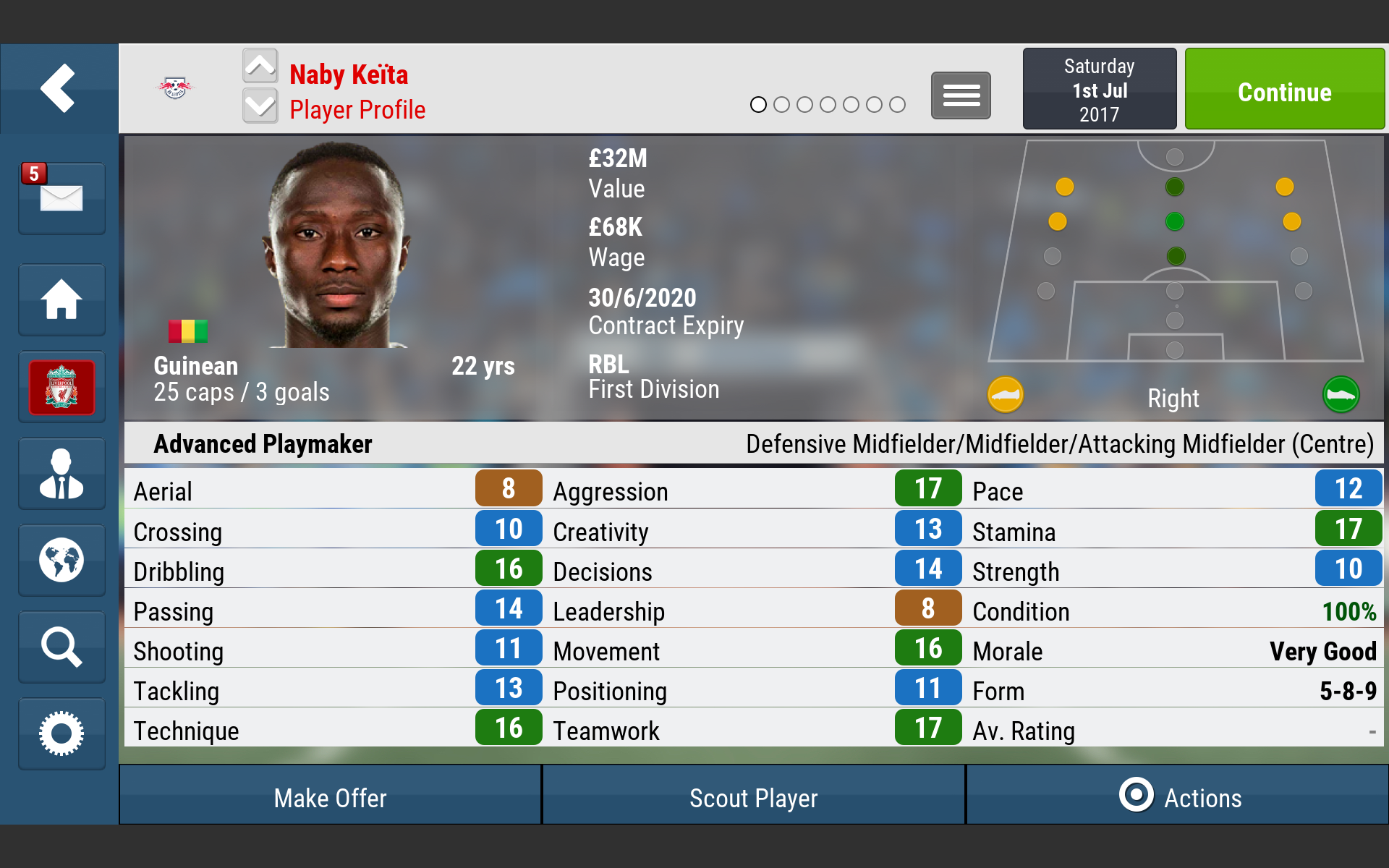 Keita was wanted so much by Klopp that we agreed to sign the African a year in advanced after a summer where we wouldn't give up on our main transfer target. Especially as everyone could tell Coutinho was on his way out of the club but we did manage to hold onto him until January. With Keita's arrival in mind it's clear to see that we wanted a hard working box to box midfielder who was not only balanced but had the ability to drive forward with the ball which are all traits fans have seen from Keita in recent years. So what happens if we search for this type of midfielder on FMM? 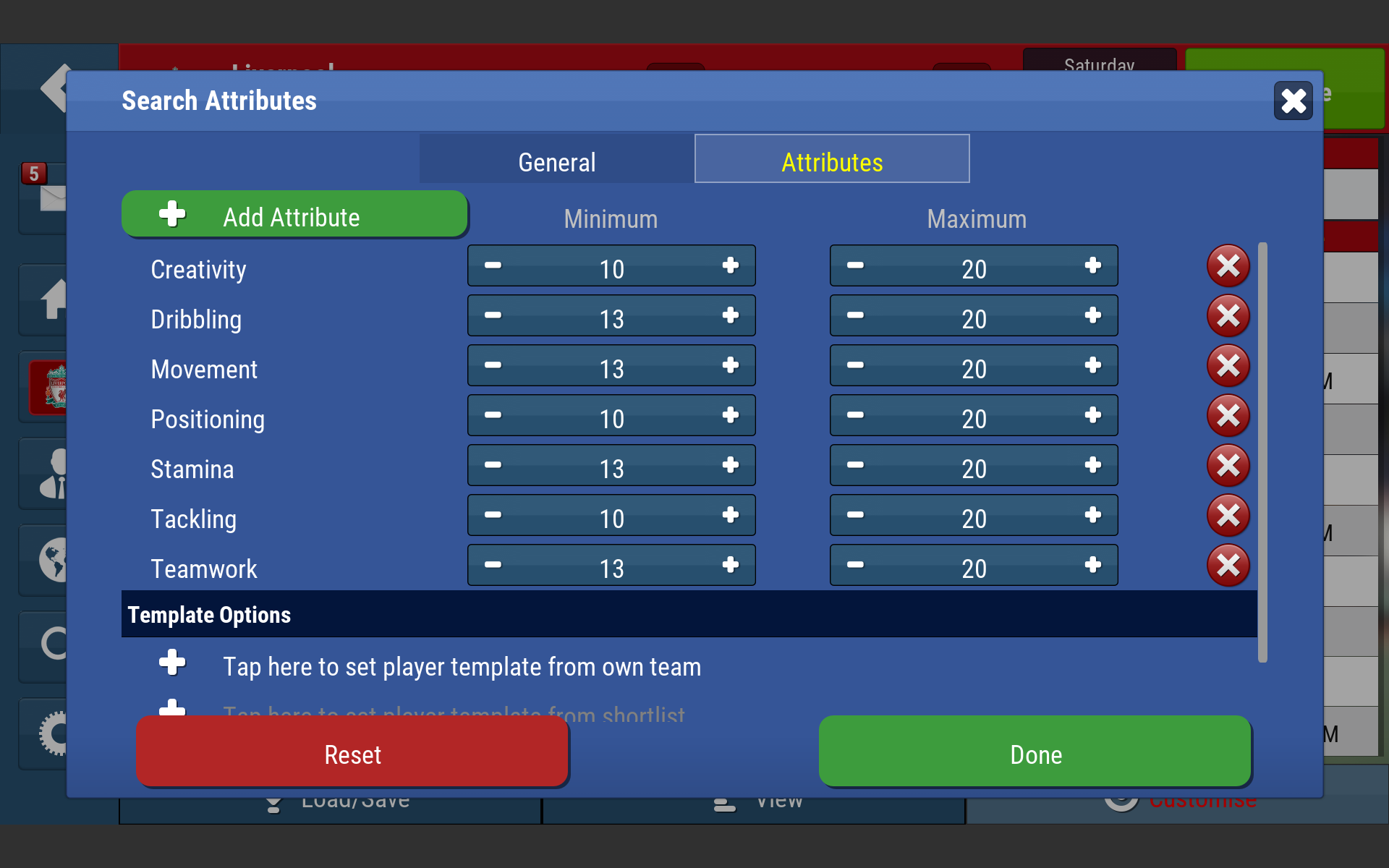 I searched for a balanced defensive midfielder (10) while also looking for a player who was hard working (stamina/teamwork). Finally i included searches for dribbling as I wanted a driving player which also saw movement thrown into the calculations to be similar to Coutinho and the work he did from that position. 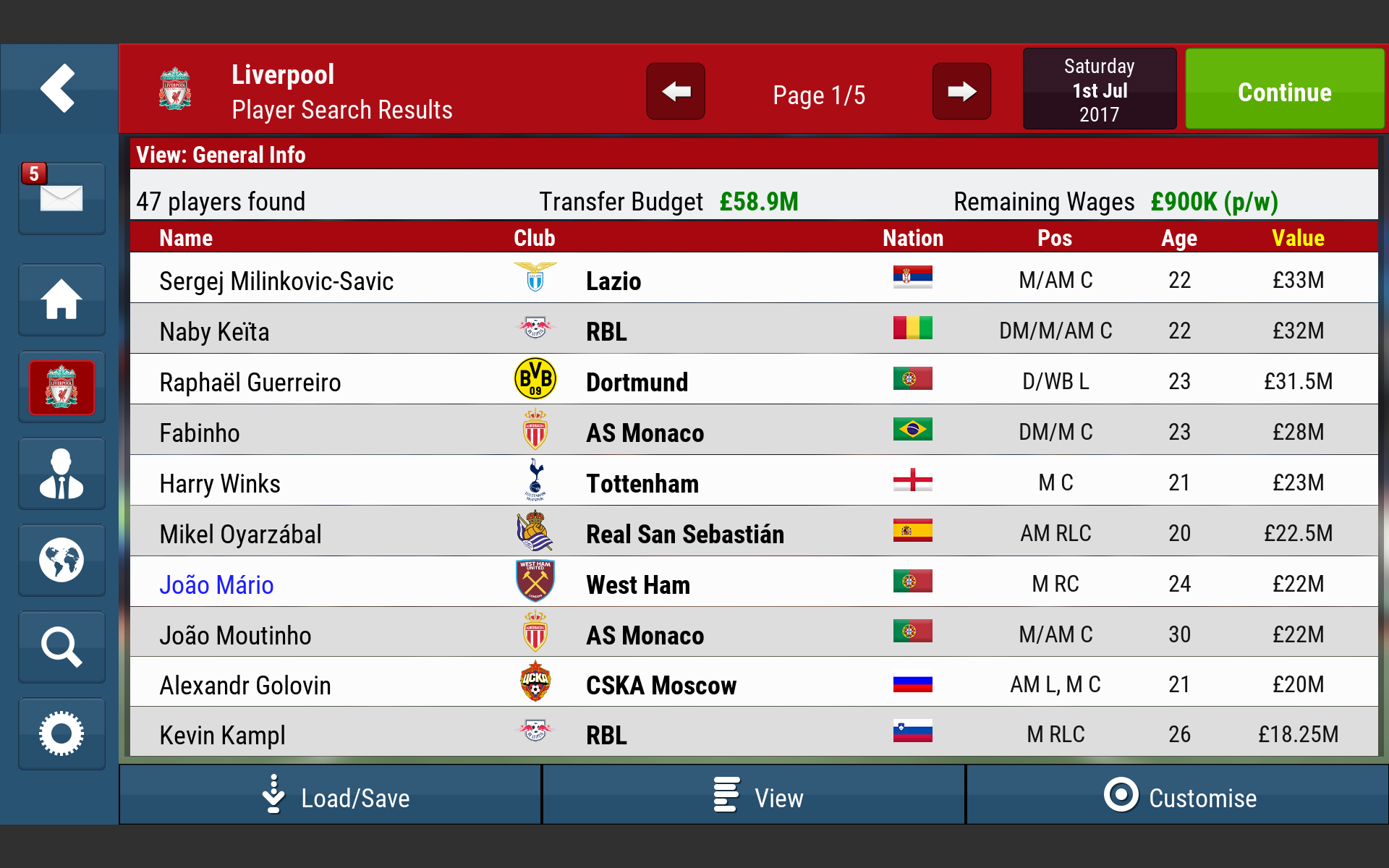 Would you look at that! The search finds Keita and based on the value based results he's the youngest balanced (DMC-AMC) central midfielder to feature. 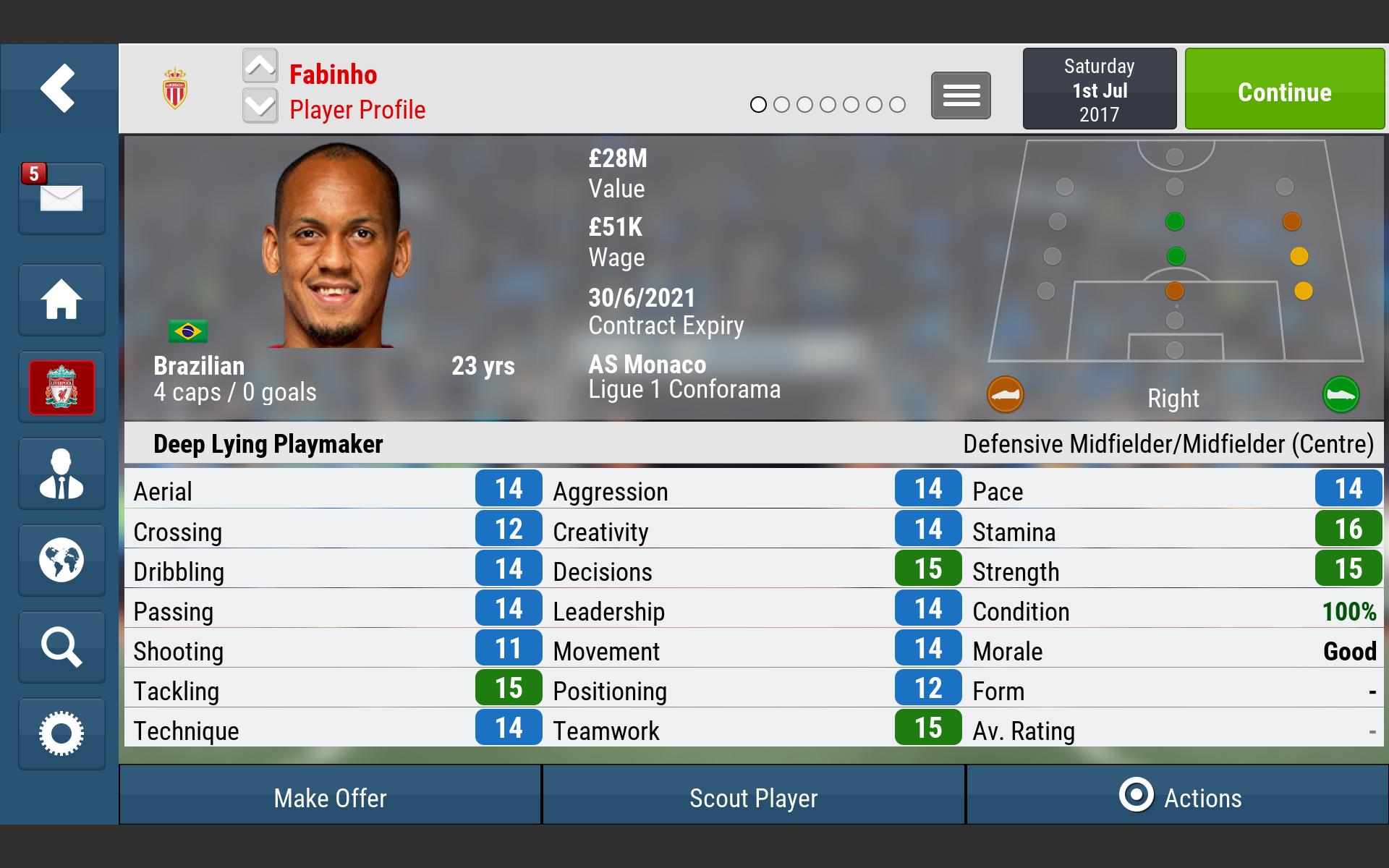 Fabinho was signed quickly after the Champions League final defeat and he was a signing that caught everyone off guard as it was just announced out of the blue. Historically Klopp has favoured a deep lying playmaker type anchoring his midfield with Hendo, Gini and Can occupying the role in recent years, however all of those players are suspect defensively. It's easy to assume we were after a physical player to replace Can who left for Juventus and one that was more defensively minded than Henderson, we also needed one that could handle the pressure of being a vital role in our midfield, especially as his job is to not only protect the defence but to start attacks. 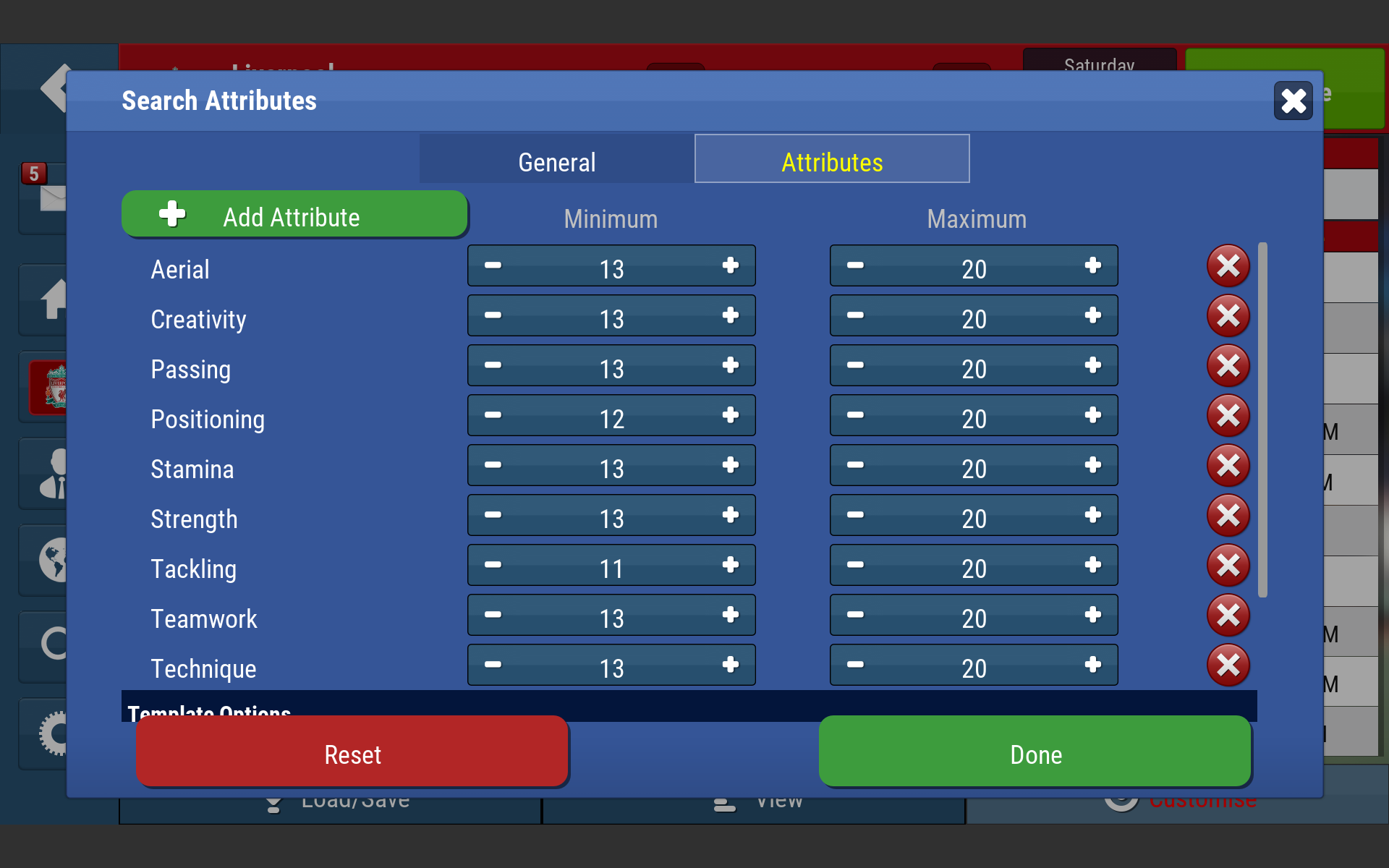 I entered the search menu looking for a physical presence with defensive and attacking attributes, however this is a Klopp team so I also included teamwork as he'll have to press. Technical and passing attributes were also added as again these are vital stats for the role in Klopp's system as shown by good passers like Henderson and Gini being favoured there previously. 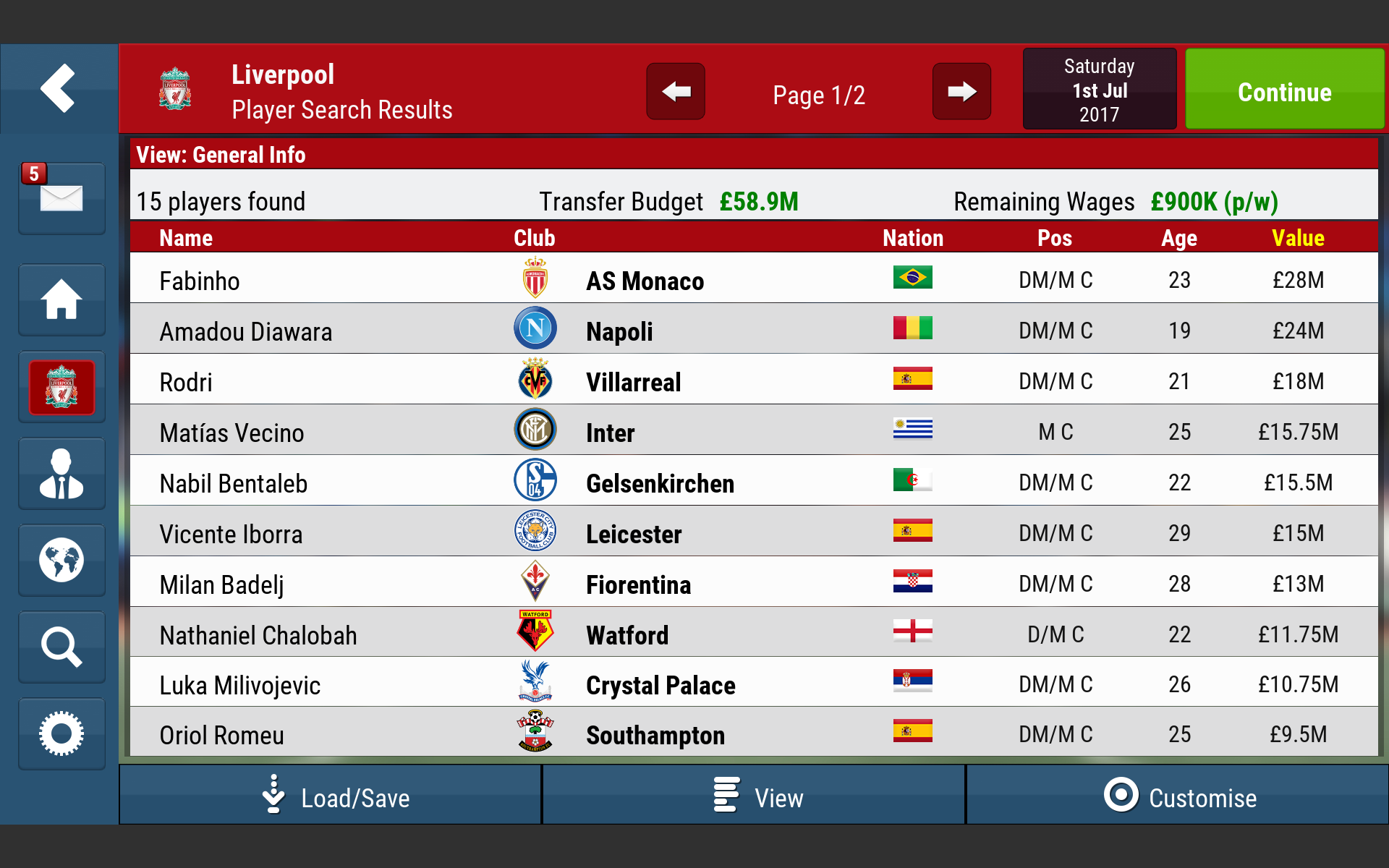 It's no surprise the former Real Madrid and Monaco player turns up in these results! Admittedly I had to lower the positioning stat more than I'd have liked but I think the potential benefits of his other high stats counter act this somewhat as a few of his stats are higher than the ones I searched for. 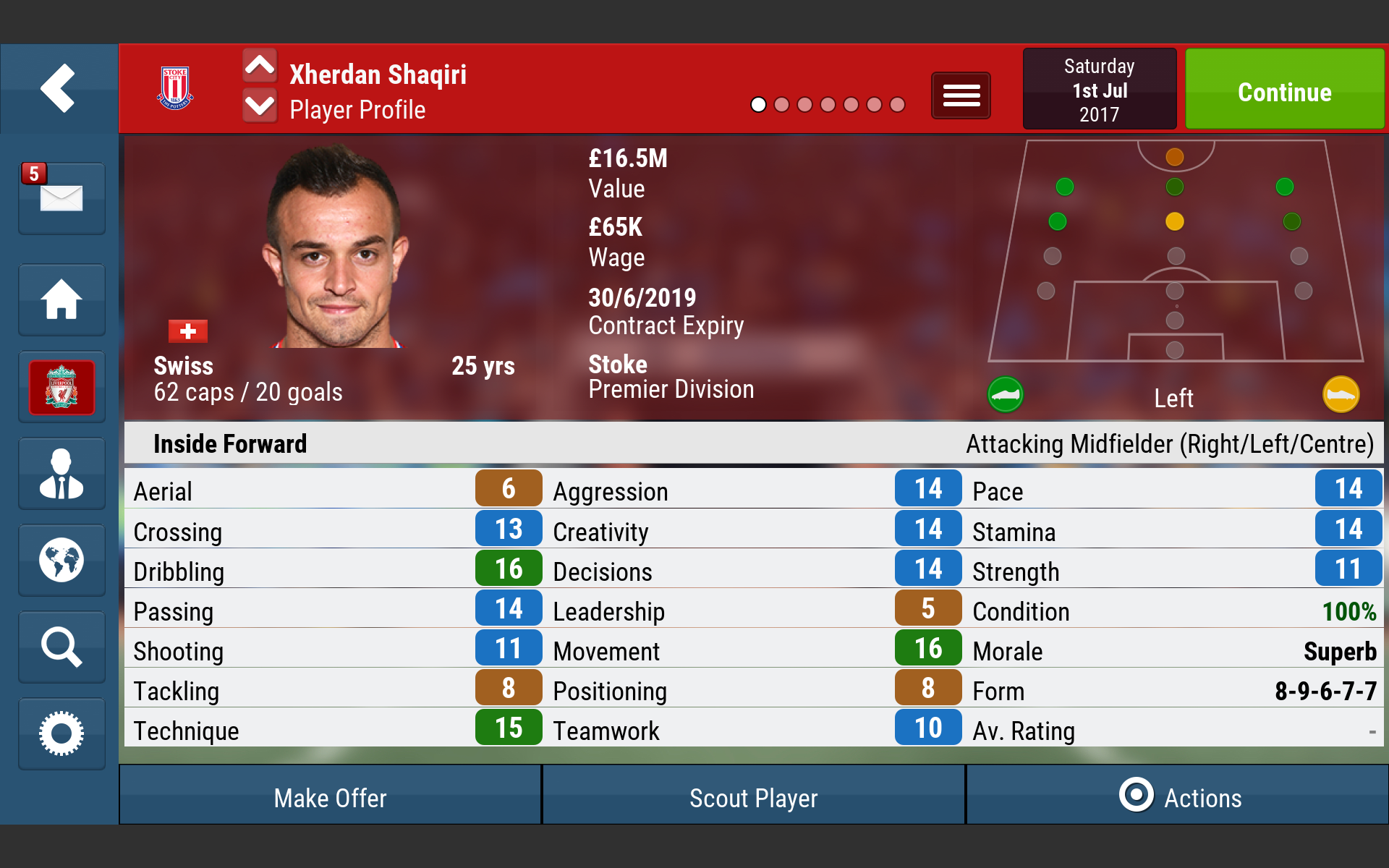 One area Liverpool were seriously lacking in options last season were in the back up positions for Salah, Bobby and Mane but Shaqiri has added some much needed depth to those position now. It's always difficult to sign a back up option but for the £15 odd million the former Bayern man cost I think the club did really well. Taking one of our wingers out of the side last season took away a lot of pace, power and general attacking threat as we saw in Ukraine after Salah's injury, so in looking for a back up option we needed someone with decent pace, drive and attacking qualities while someone who won't ignoring their defensive responsibilities. 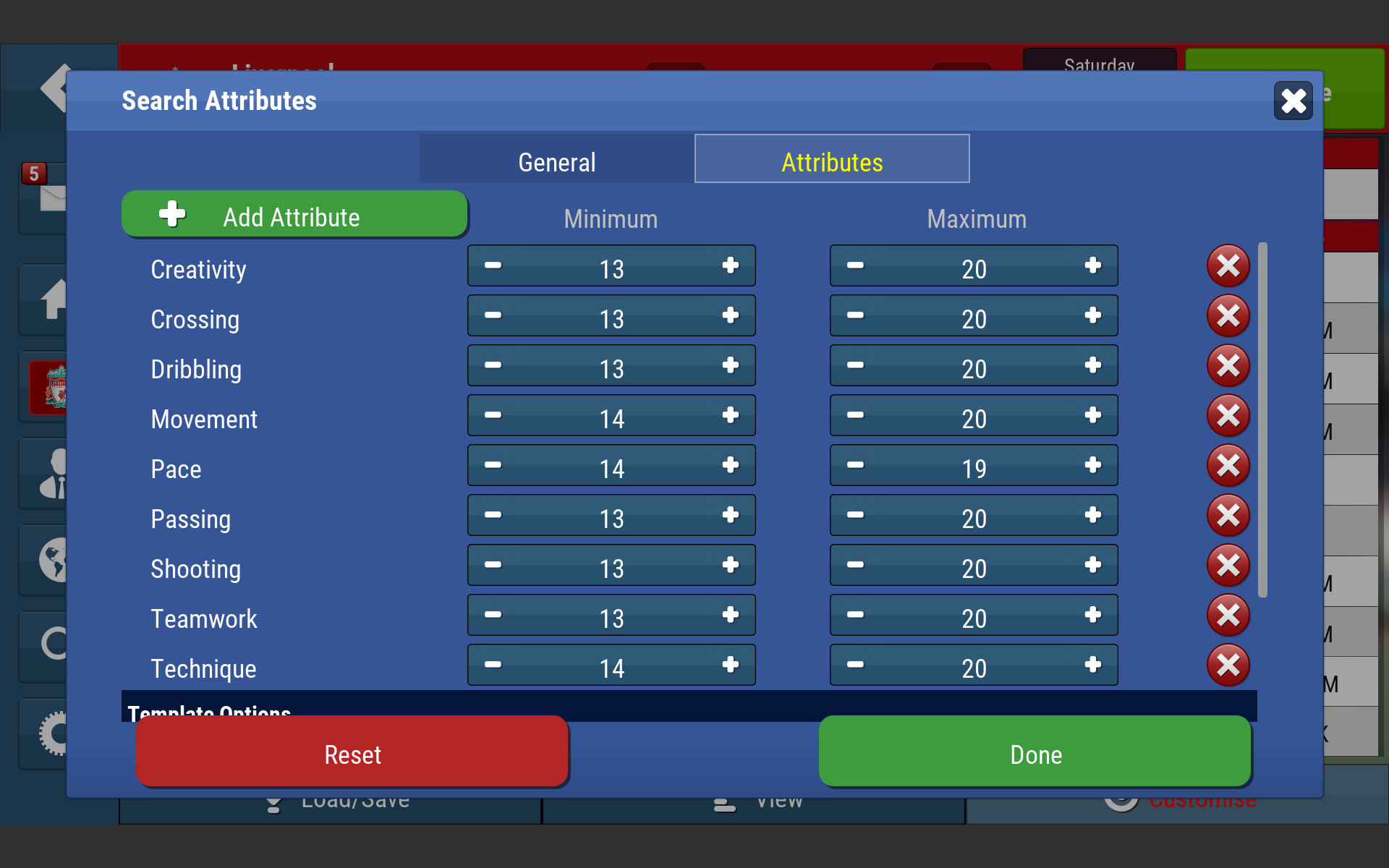 A simpler search this time as I focused on looking for an attacking winger with good teamwork to suit our current attack. 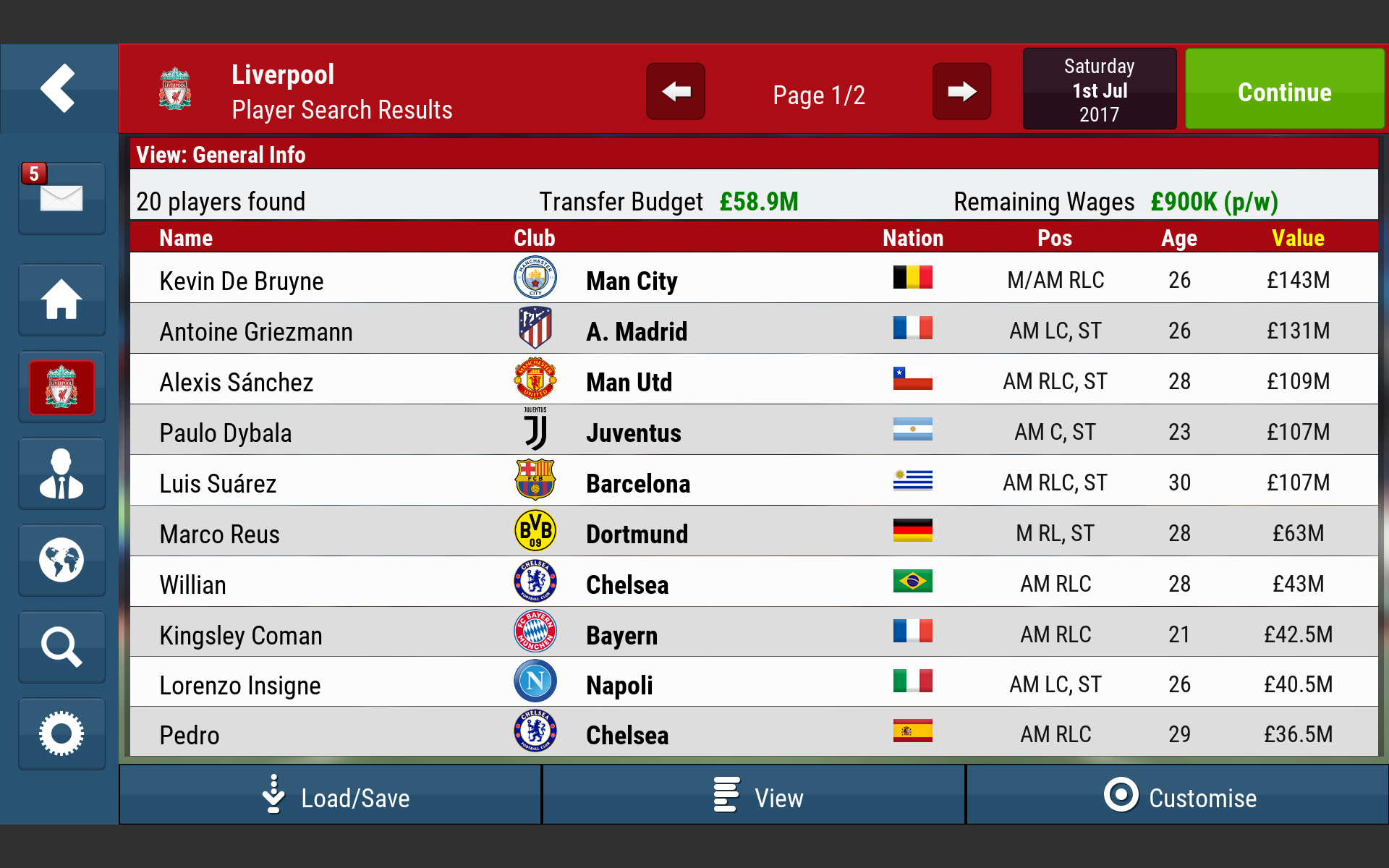 Unfortunately the first page of results come up empty as it's mainly unattainable players and ones who wouldn't want to be a back up option. So what about page two? 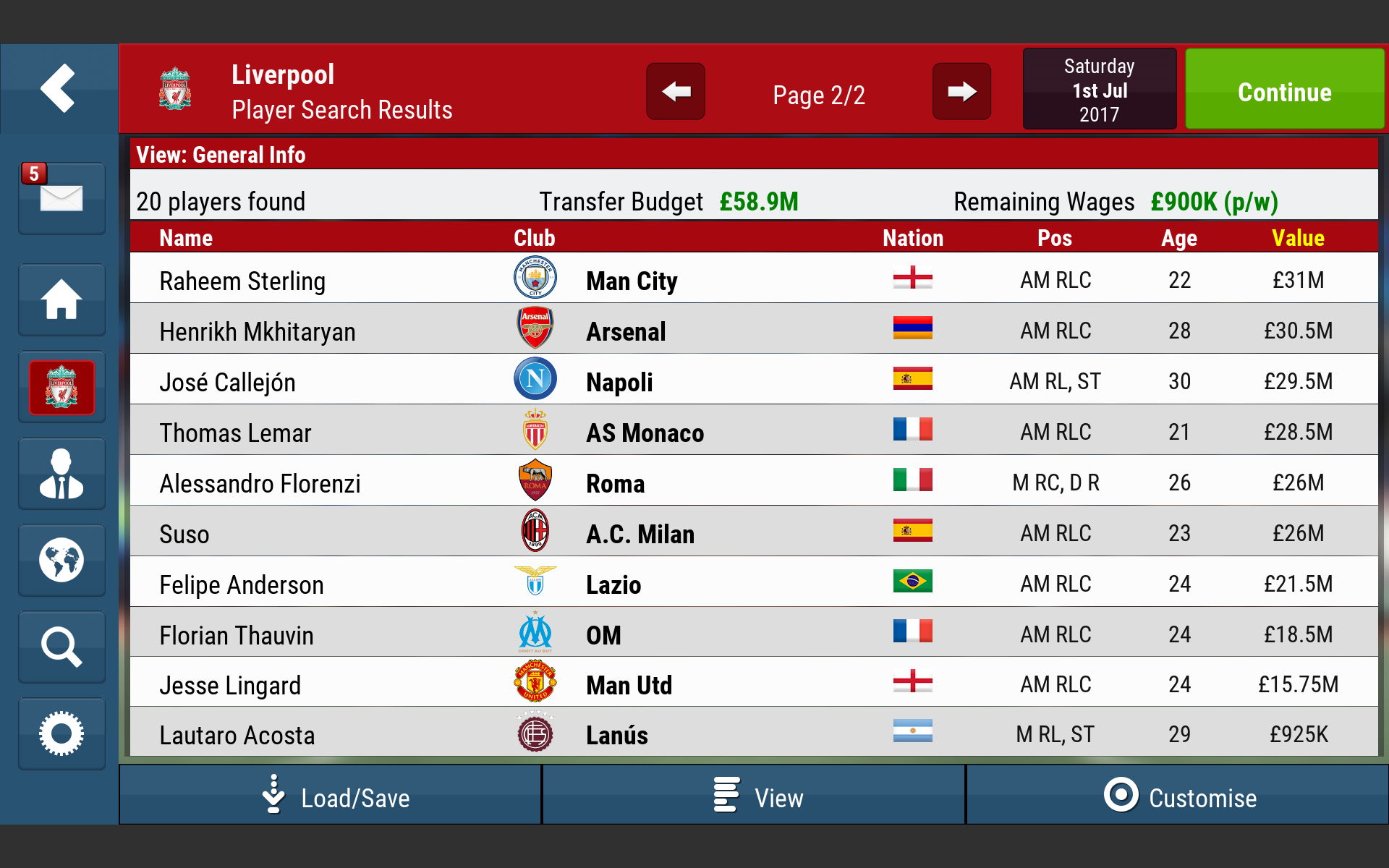 Another bust search for our back up winger but it's interesting to see Thomas Lemar on that list considering we were heavily in for him in January. Looking at this however I think it's clear to see Shaqiri is a solid budget option as from these searches Lemar moved for €70m and Anderson moved to West Ham for €38m so the reported €15m for Shaqiri is a reasonable compromise which left money free for elsewhere. 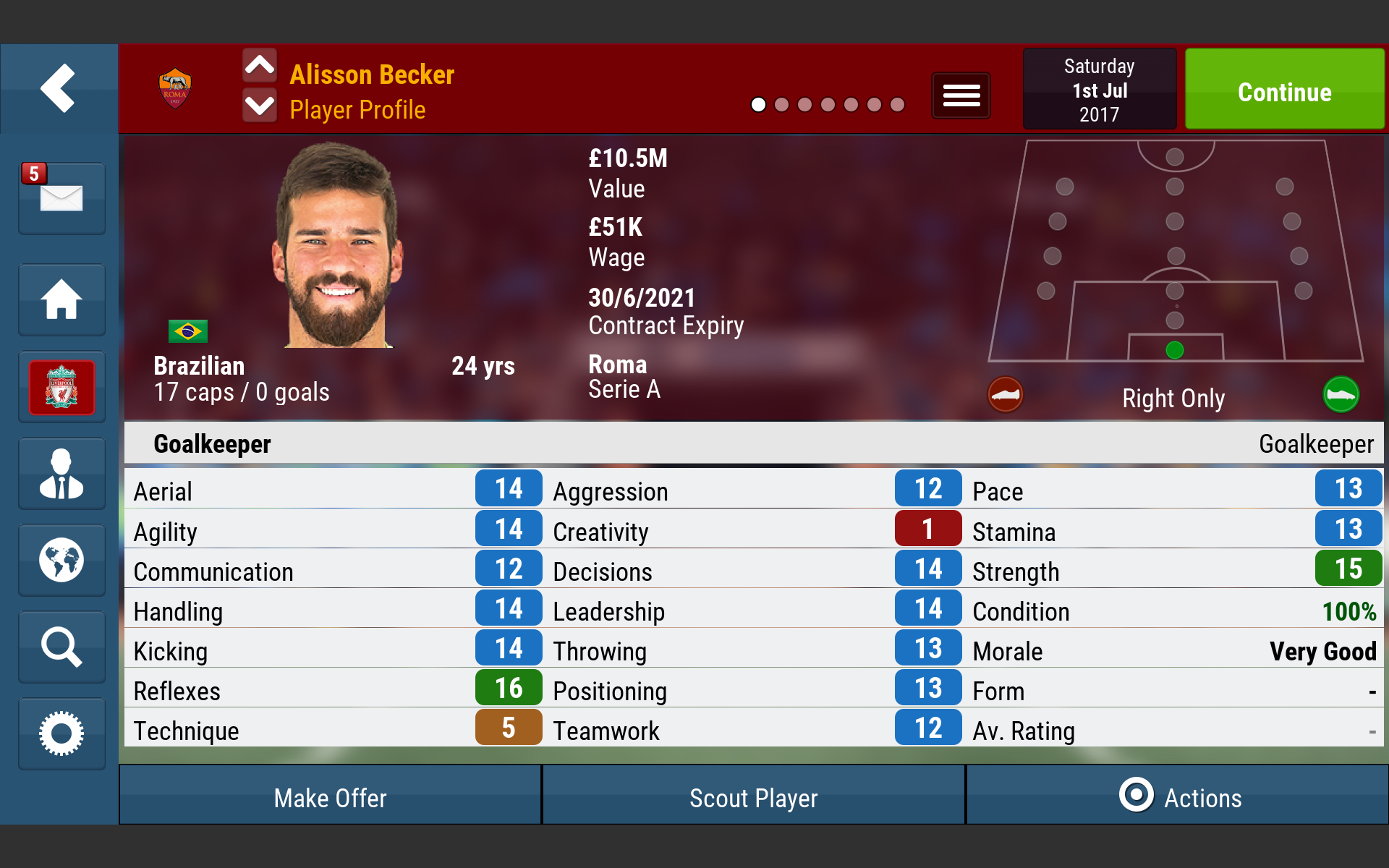 The biggest problem for Liverpool since Reina left the club has been the goalkeeper as Mignolet and Karius have failed to reach the standards we'd expect, so you can imagine the excitement when Liverpool broke the bank to sign a top keeper! Liverpool need a commanding keeper who can organise the defence, not be bullied at set pieces all while having the ability on the ball to play out from the back and launch attacks. Let's find out what FMM has in regards to this type of player. 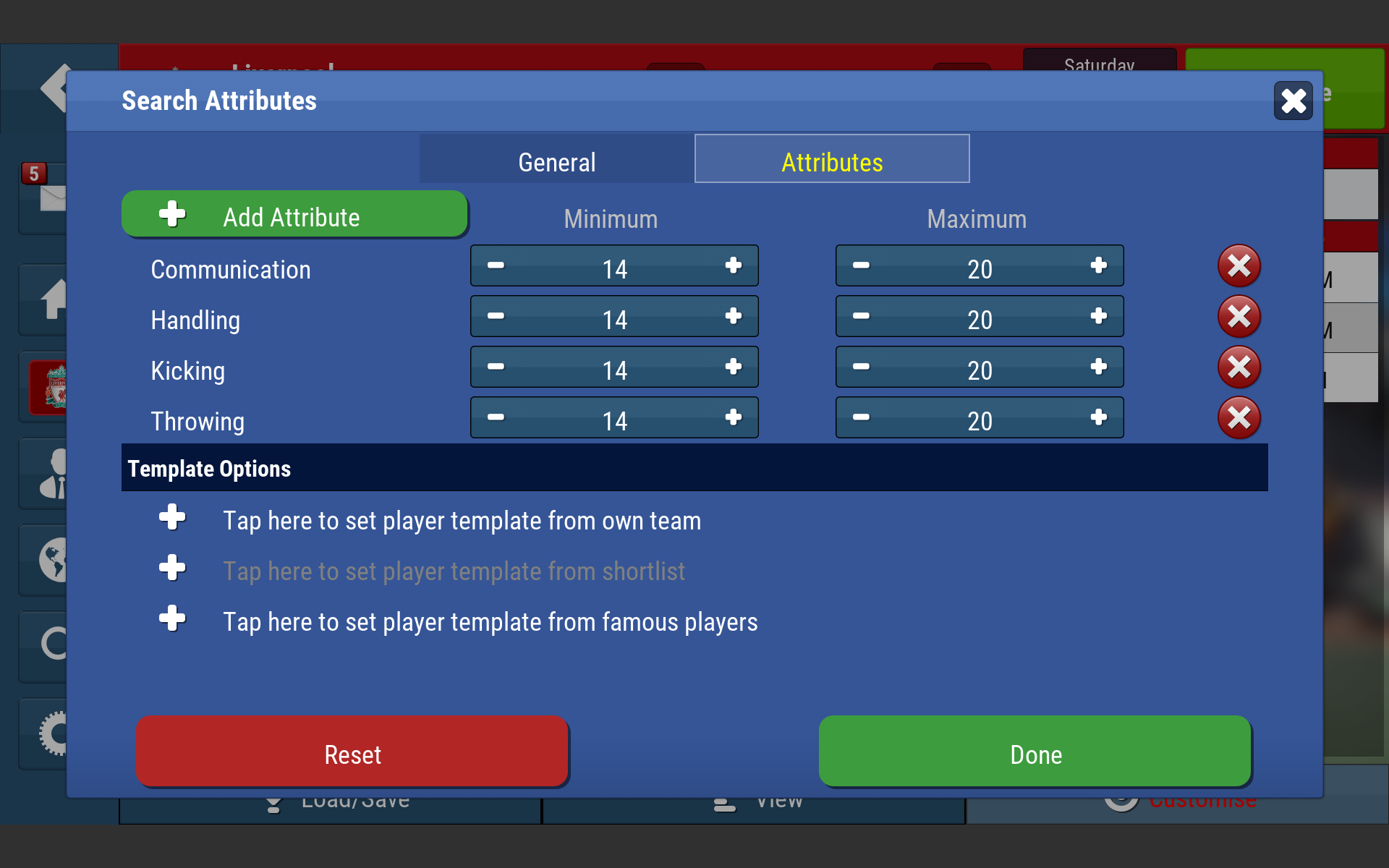 A simple high level search as I'm hoping for a top keeper who's able to play out from the back and organise a defensive unit. 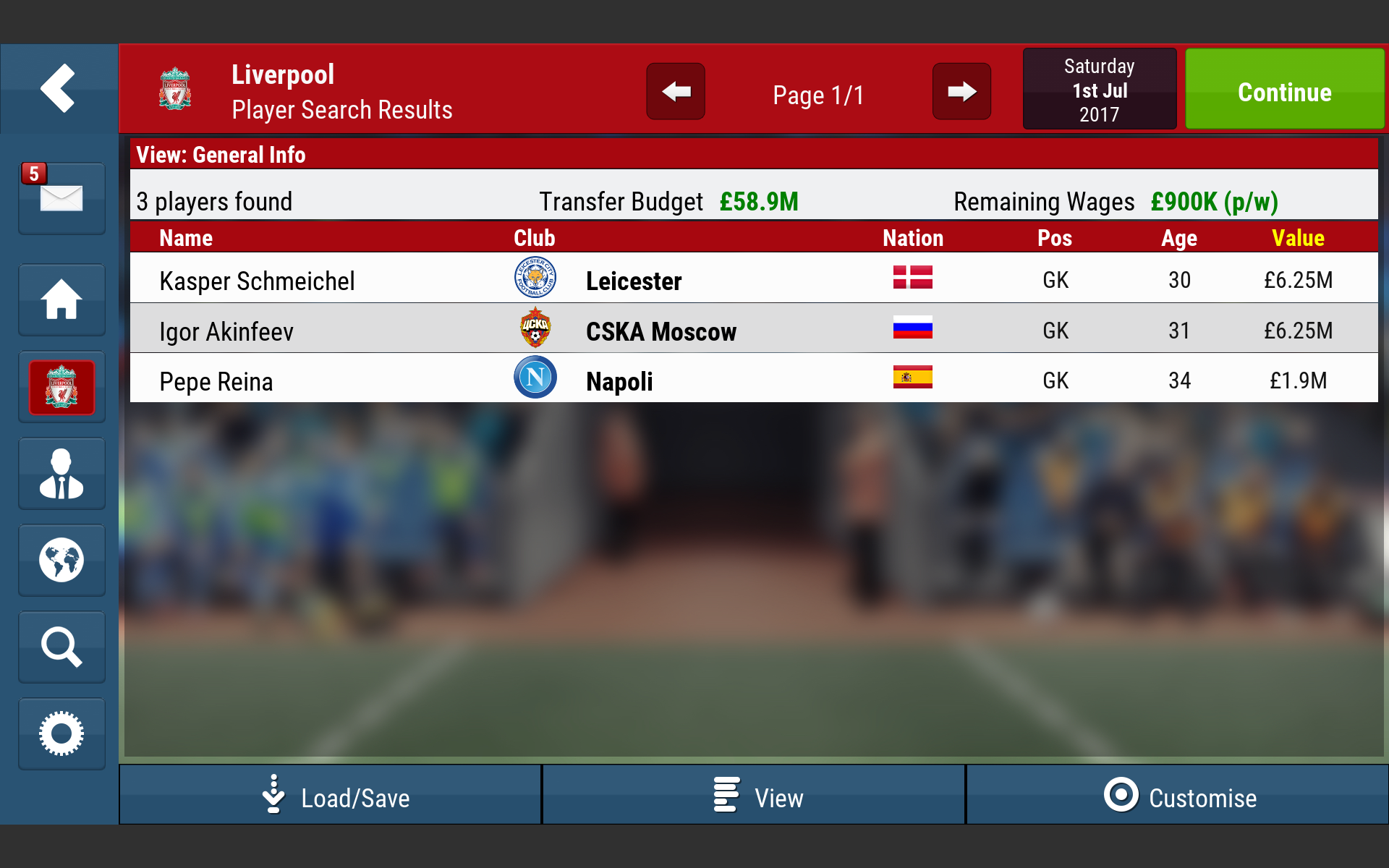 I may have accidentally had "interested on" in this screen shot as I'm sure Oblak was in the mix but either way Alisson doesn't appear with this search. Irritatingly our former keeper Reina makes an appearance here as does FMH fan favourite Akinfeev. Let's alter the search and see what comes up. 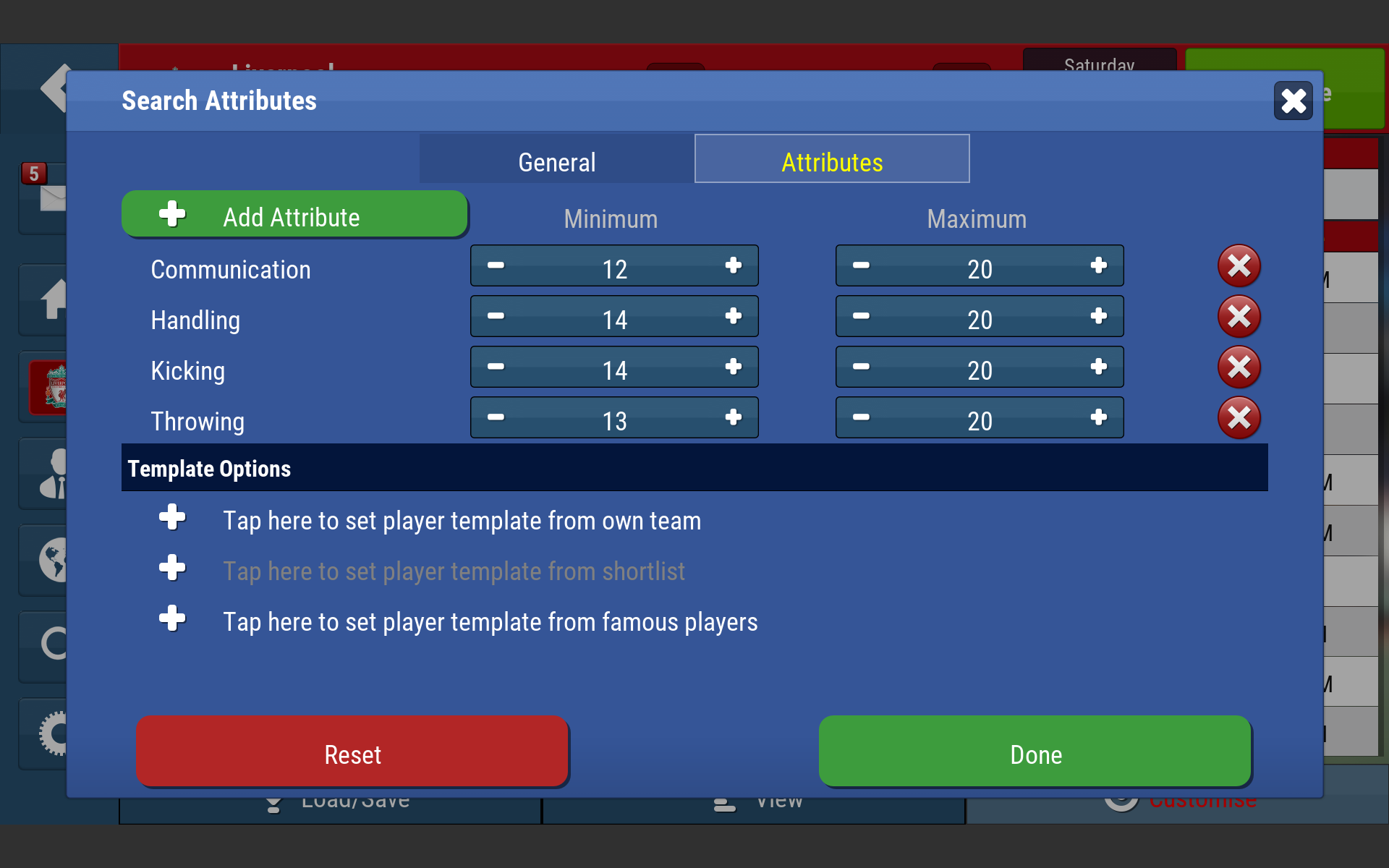 Some compromises were made but no major changes to the search so let's see what our options look like. 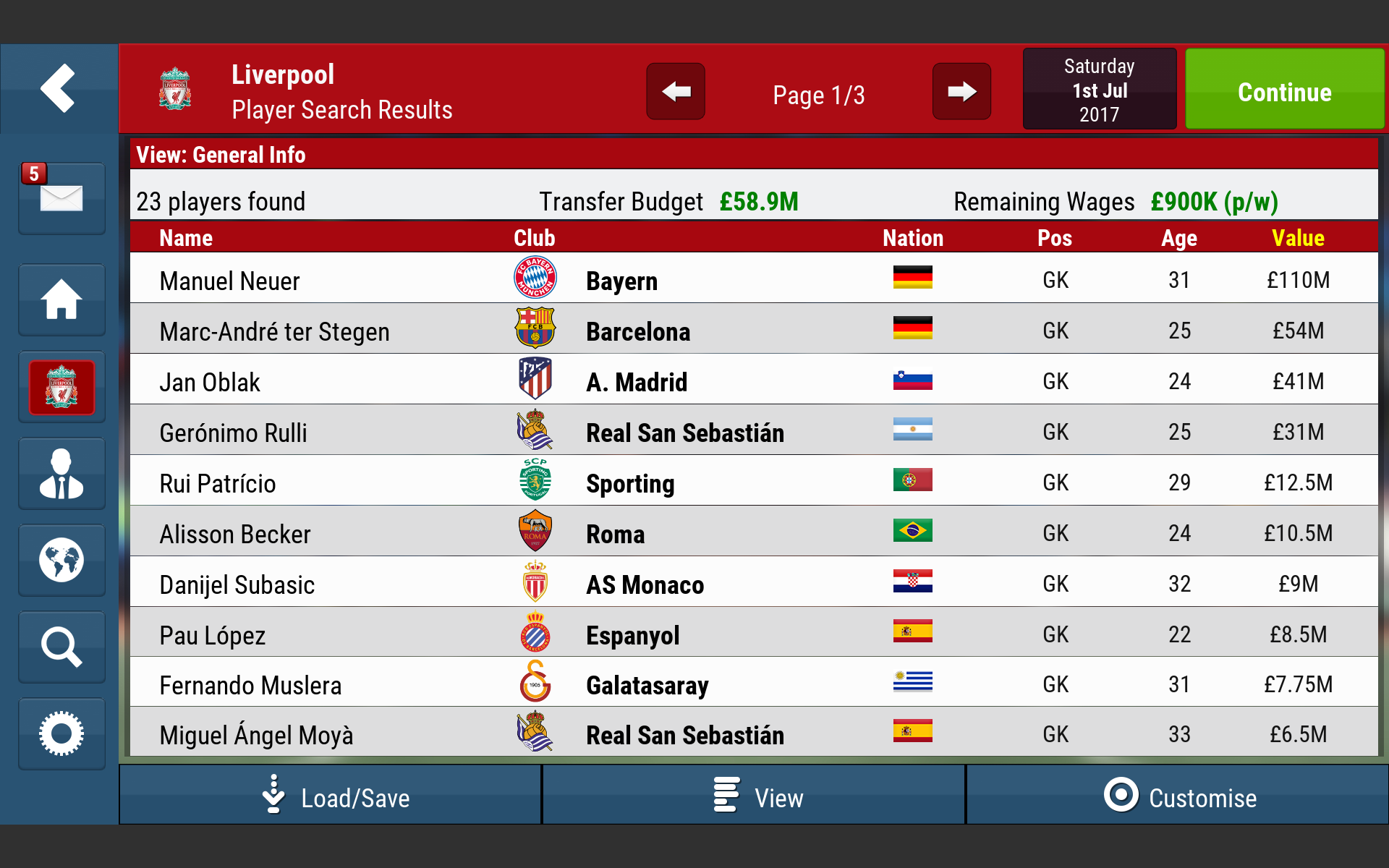 The Brazilian shot stopper makes an appearance in sixth position with four of those above him being arguably unattainable, Allison also has the added benefit of being the second youngest on the list. Another point I think would influence this is 2018 was Alisson's break out season so it is possible he was underrated by SI which would impact his attributes, I know I'm interested to see what he looks like on 2019 anyway.

That's it for Livepool's latest additions but I thought it would be interesting to roll back the database and check out Virgil Van Dijk! It was very publicized that for Klopp it was VVD or no one so let's see if FMM gives us any information on this decision. 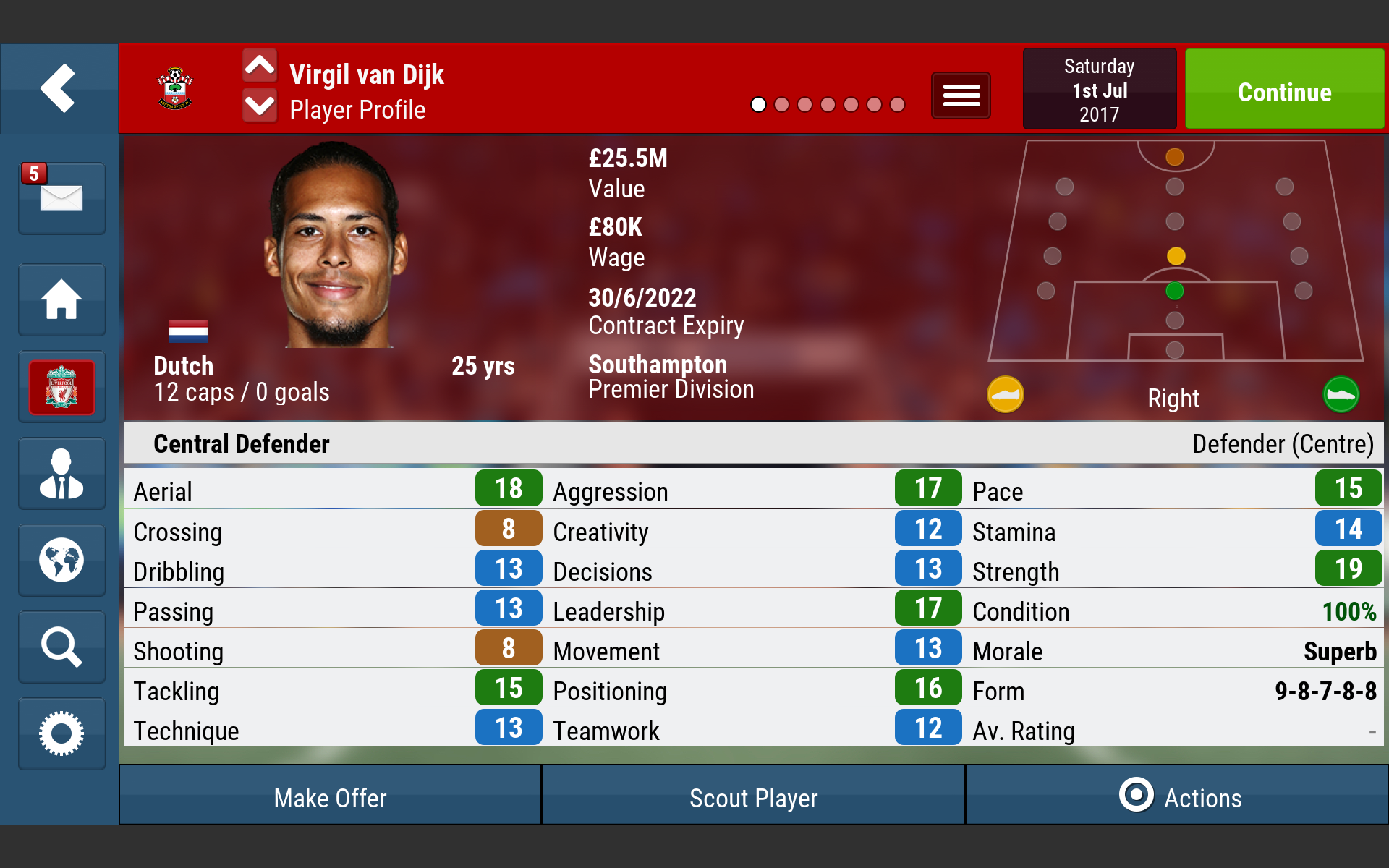 When Van Dijk joined in January he completely transformed Liverpool's defence to one of the best in the division, it's no coincidence it was with him in the side we conquered most of Europe as the dominate Dutchman brought so much belief to Anfield. The former Celtic player brought leadership, passing ability, aerial presence and pace to our back line and his composure on the ball is second to none, so is there any other players on FMM who can rival our £75m signing? 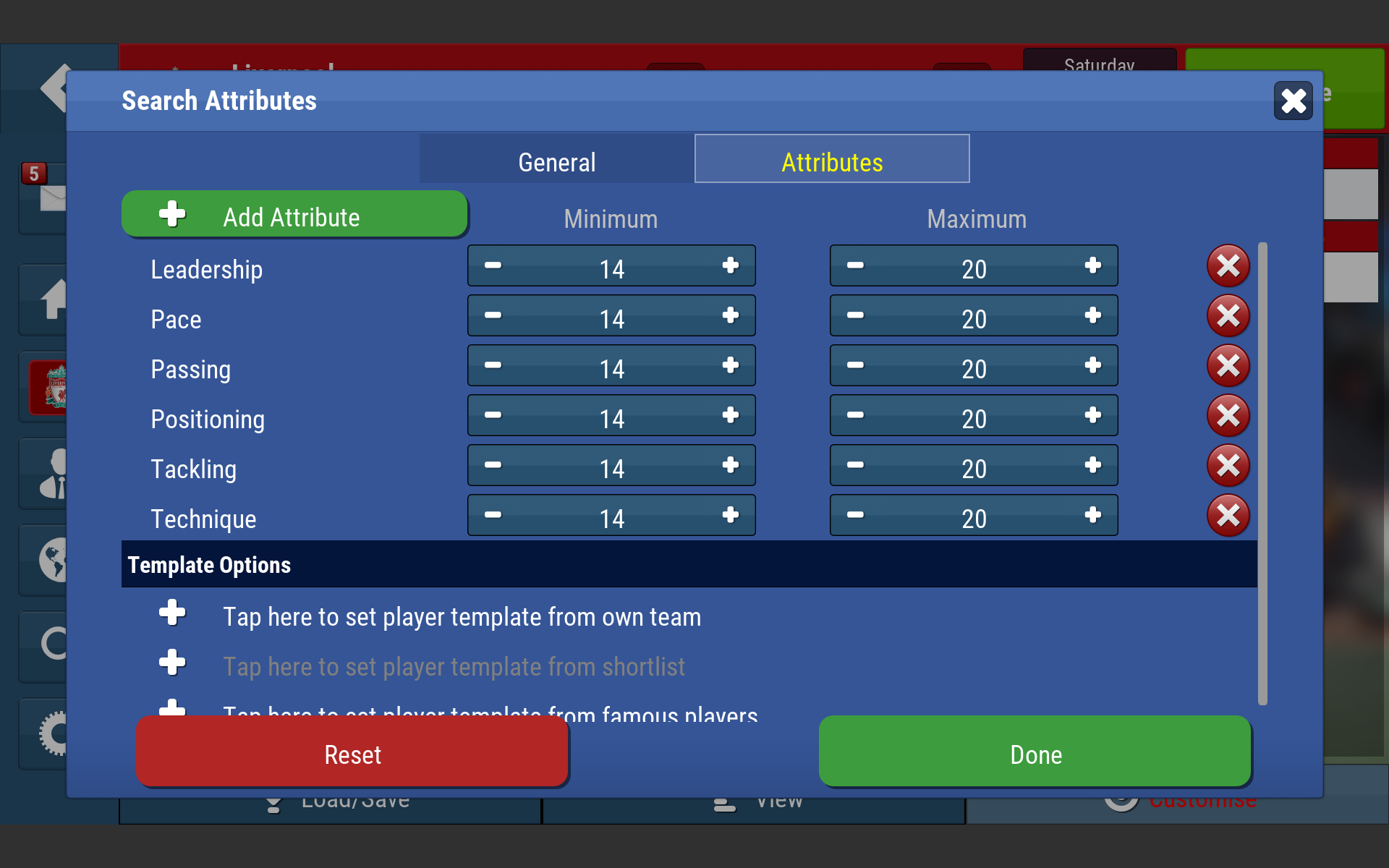 I'm not messing about with this search as VVD is an elite level defender so the search focuses on leadership, passing ability and both defensive attributes. 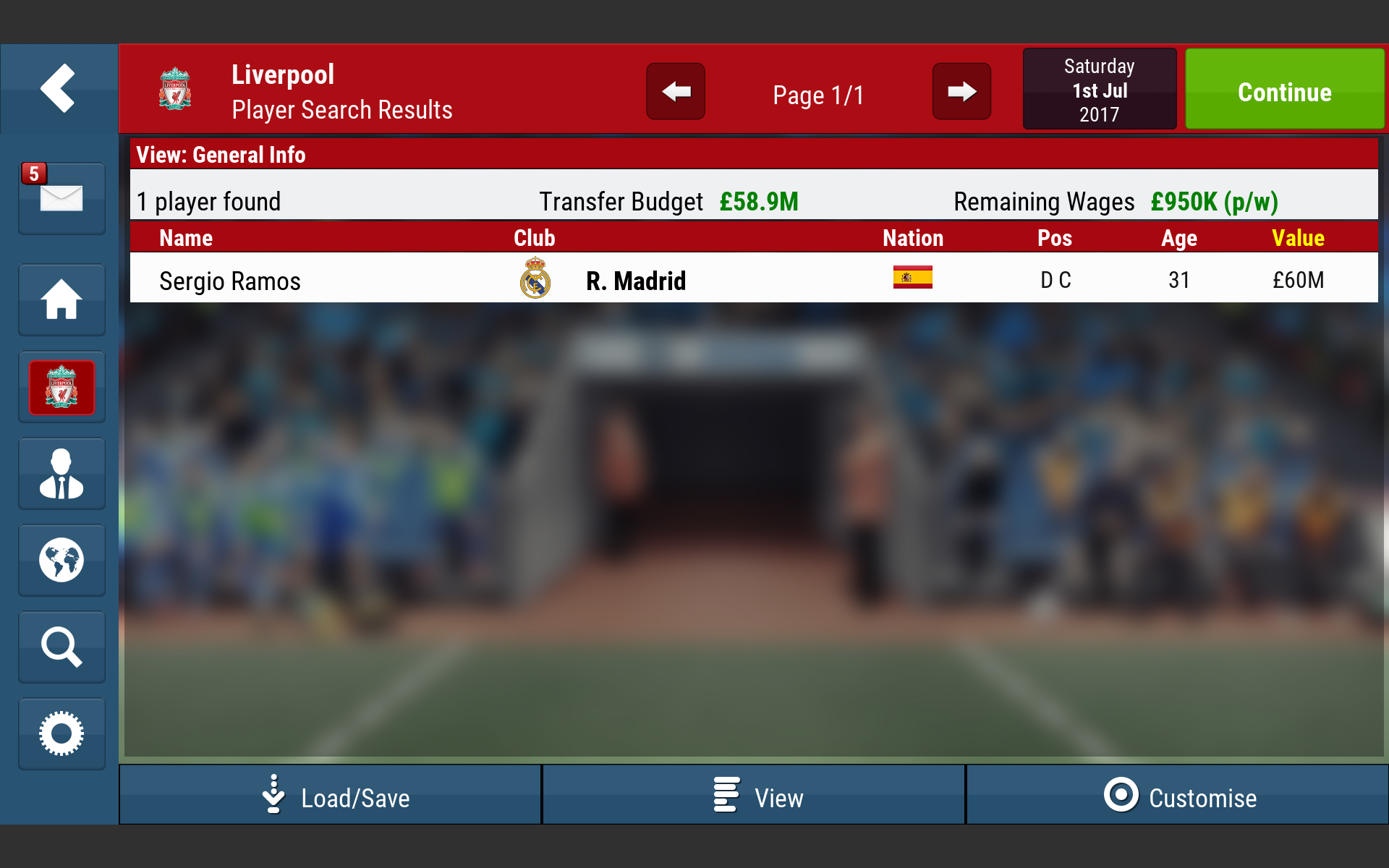 The only defender to appear under this search is Sergio Ramos, the captain of a triple Champions League winning side as well as a player who was a key part of his country dominating international football for years. Love him or hate him Ramos is in the conversation for one of the best CB's of the generation. Let's loosen the search and see what develops. 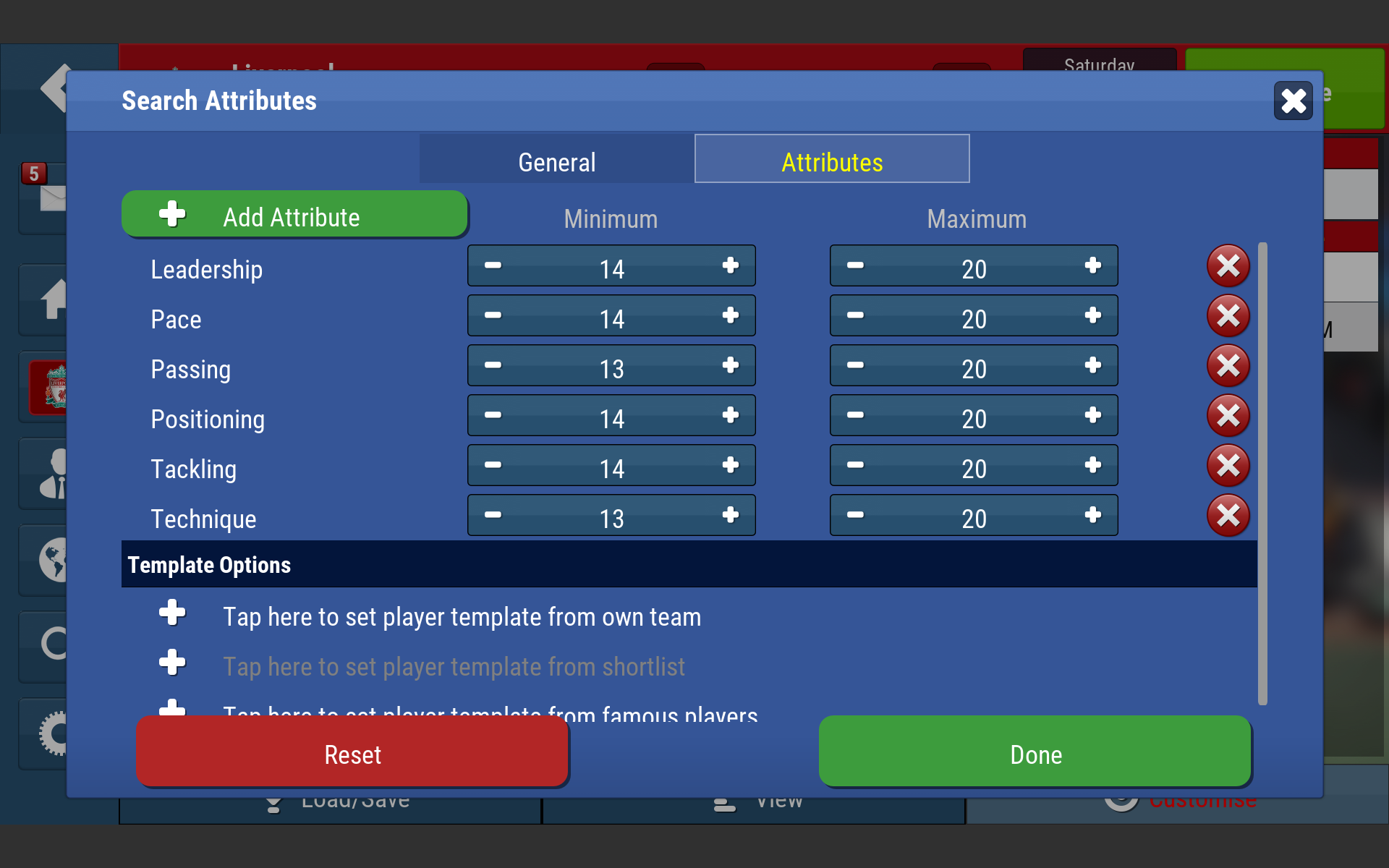 I dropped two of the lesser required attributes so let's see if Ramos has any rivals. 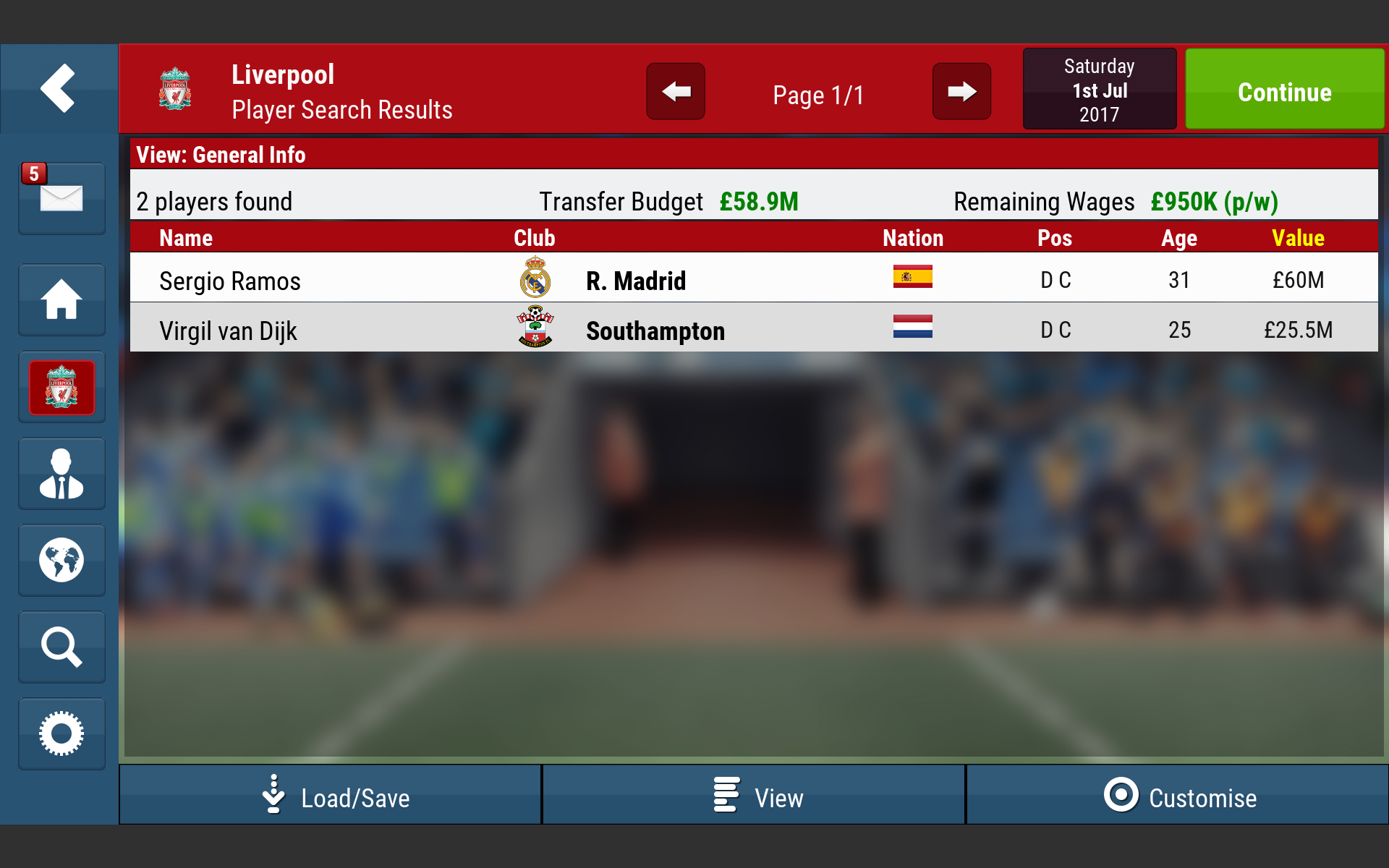 Well well well would you look at that! Looking for defenders with these attributes VVD is the second best on the game with the unobtainable Sergio Ramos taking the crown. This is why Klopp was VVD or nothing as the Dutchman is elite level which is sort of shown by how his ridicules price tag isn't even mentioned anymore, he's just worth every penny.

I decided to do this article as anytime I'd look for a Liverpool type player I'd see our signings over and over so I decided to showcase it. If Klopp or Liverpool scouts used FMM to identify targets it's well within reason their list would include the players highlighted today, as I've shown these lads have exactly what we needed which is why we spent big to secure them, obviously real life football is more than stats but I'm now convinced these signings will all work out.

As always thank you for viewing and I'd love to read your views and opinions.