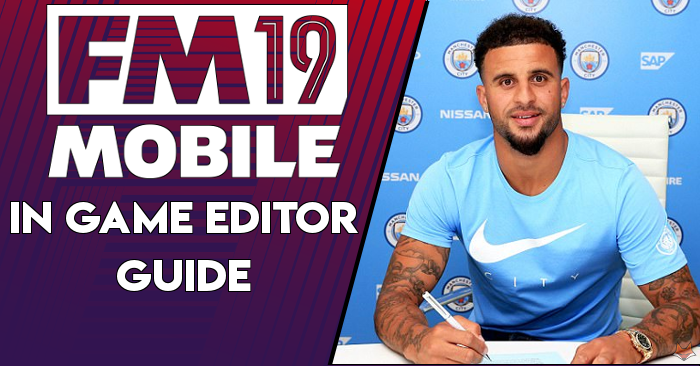 The In Game Editor (IGE) has been with us for a few years now and can be a bit of a controversial topic in the FMM community with many enjoying saves using it and other being against its use as they see it as cheating. This guide won’t be dealing with the rights and wrongs of its use as you pay your money and take your choice how you play the game and if that involves using the IGE, you enjoy yourself and you aren’t cheating anyone else within the community then great.

If you are interested in Hex editing then this guide cannot help you and you should check out this guide instead.

It should be noted that in order to create an even playing field you cannot use the IGE in any Vibe Community events or any of our challenges unless otherwise stated.


Personally I wouldn't usually play a save using the IGE but over the last few weeks I have been using the IGE in my Score One, Steal One save to transfer players I have won straight into my squad and it got me thinking about the IGE. It’s use has created a fun save for me that has had me using players I wouldn’t usually but it also showed me what you can do with the IGE.


You can purchase the IGE from the store page and it costs £8.99 or your local equivalent. As it costs the same as the game itself you want to be sure of what you can do with it before you buy it and make sure that it will be value for money. You can edit any club or player in the game but it is worth remembering that if you plan to share the edited save with a friend they will require the IGE to load the save.

To edit any player in the game go to that players attributes page and you will see a grey edit logo in the bottom right hand corner. A grey edit logo means you haven’t edited anything in the save at this point and you could turn off the editor in settings > unlockables.

Once you have edited anything within the save the edit logo will go yellow and the editor is now locked on in the save and cannot be turned off.

Once you are on the attributes screen of the player you wish to edit press the edit button and you will be taken to this screen. 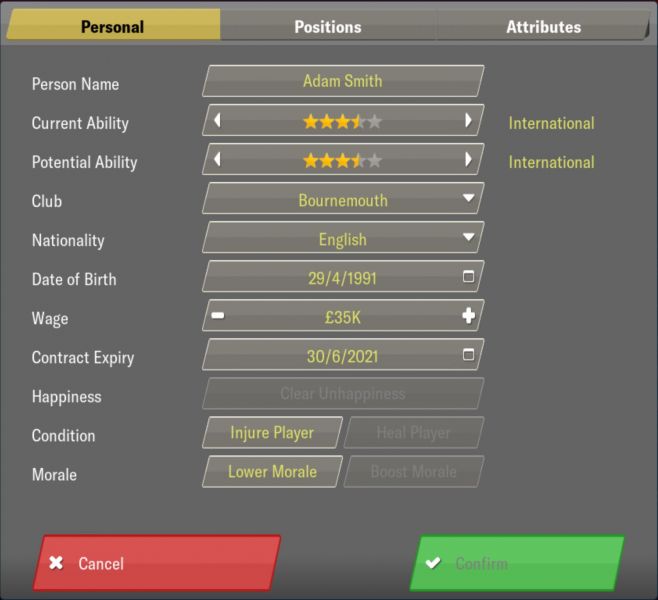 I think this screen is pretty straight forward and you can edit the players personal details such as name, birthday, nationality, wage and contract expiry. You can also injure or heal a player and raise or lower there morale but perhaps the less straight forward section is the current (CA) and potential (PA) ability star ratings. The PA rating needs to be the same or better than the CA as a player can’t have better CA than the potential they have. If you wish to improve or worsen a player straight away you can leave these stars and edit there individual attributes which will in turn increase/decrease the players star ratings. If you want to give a player the chance to get better through training and playing time then only improve their PA rating and that will give the player a chance to get better in game. 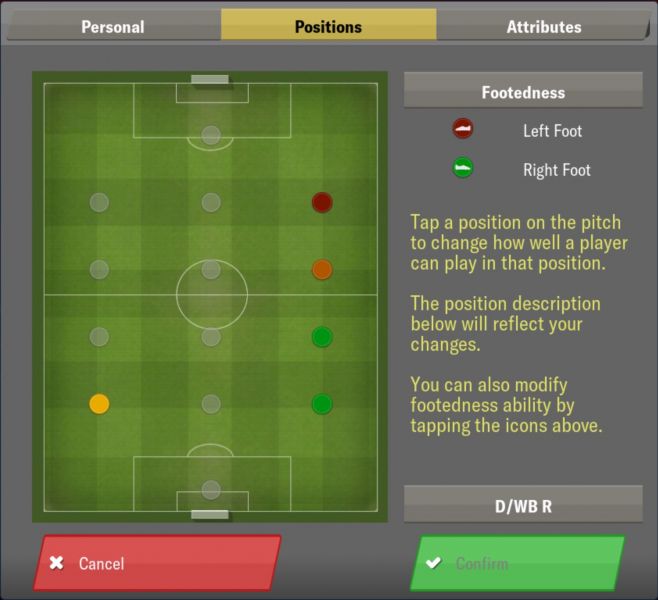 The important thing to remember in the positions screen is that a player must have light green (natural) in at least one position on the pitch and also on his footedness. Simply making a player natural in a position isn’t suddenly going to make them great in that position if they don’t have the attributes to play there. 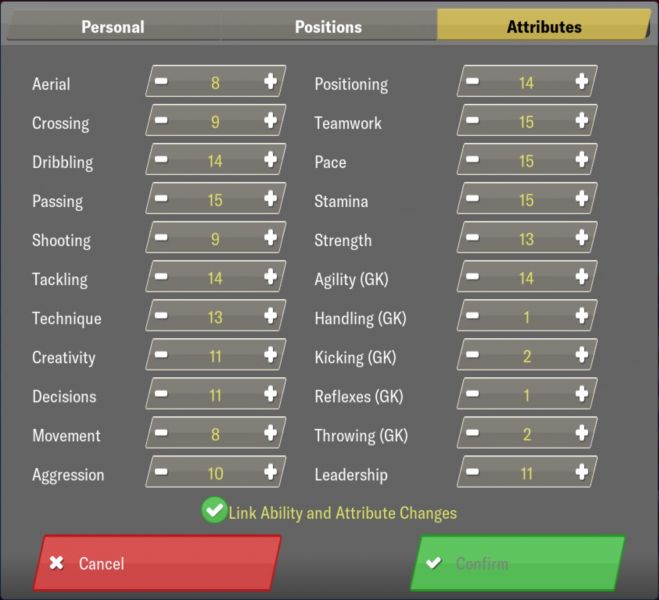 
Below the list of attributes you will see a green tick. As the caption says when this is ticked any attribute changes you make will raise or lower a players CA depending on what you do. This means if you take a no hoper and boost his attributes to a top level his CA and PA will go up to 5 star meaning he will maintain that level of attributes in the game. If the option is unticked the attribute changes will happen but as you progress in the game he will revert back to his old attribute levels. 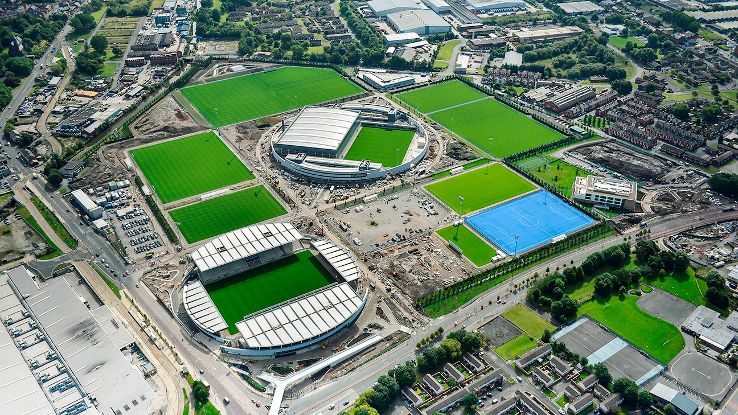 You can edit any club or national team in the game including clubs that are in unplayable leagues but it is worth noting that you cannot move a clubs division or nation. I guess if you boost a clubs finances and facilities and that would increase the chances of them being promoted to a playable league.


If you go to the find club section and pick the club you wish to edit you will then find the same edit logo as on the players attributes screen at the bottom right of the screen, click that to bring up the club edit menu. You can edit the clubs name (you cannot edit a countries name) here but perhaps more importantly you can edit the clubs finances and reputation. A clubs reputation has 7 settings and go from obscure up to worldwide and effects the quality of players and coaches you can sign to the club but also the expectations of the board. This means  if you change it to worldwide you will be expected to win everything just as clubs like Manchester United and Real Madrid are every year. The transfer and wage budgets aren’t effected by the clubs reputation and can be maxed out regardless of if you have an obscure or worldwide reputation. The maximum you can make the get the transfer budget is £500m and the wage budget £7.25m per week.

You can also edit the clubs kit colours and design on this page. Simply click each colour and change it to what you want it to be and to change the kit design click design and it takes you to a menu where you can choose the design you wish. 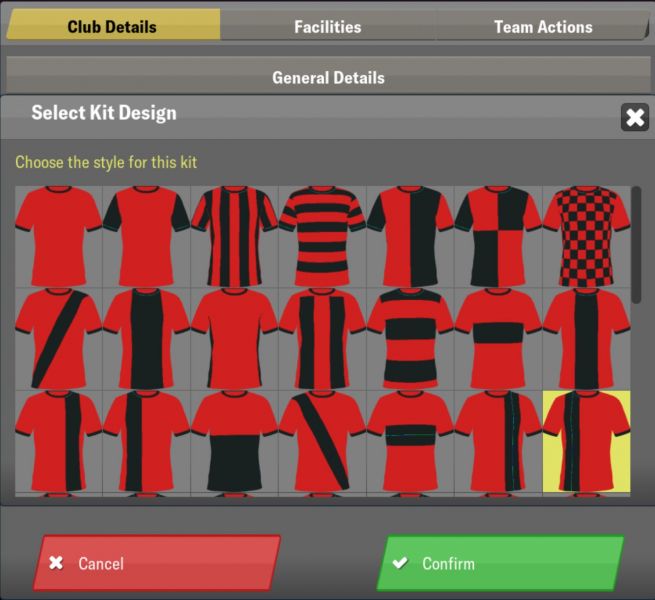 You can change the clubs training and youth facilities here as well as the name and size of the clubs stadium. You can also increase/decrease the clubs support here as well by changing average, minimum and maximum attendance. The minimum is what size crowd you could expect the club to get in a small importance game such as a league cup tie versus a league 2 club, maximum is the type of crowd you would get against a top side or a very important game and the average is a rough estimate of the clubs attendances over the course of the season. 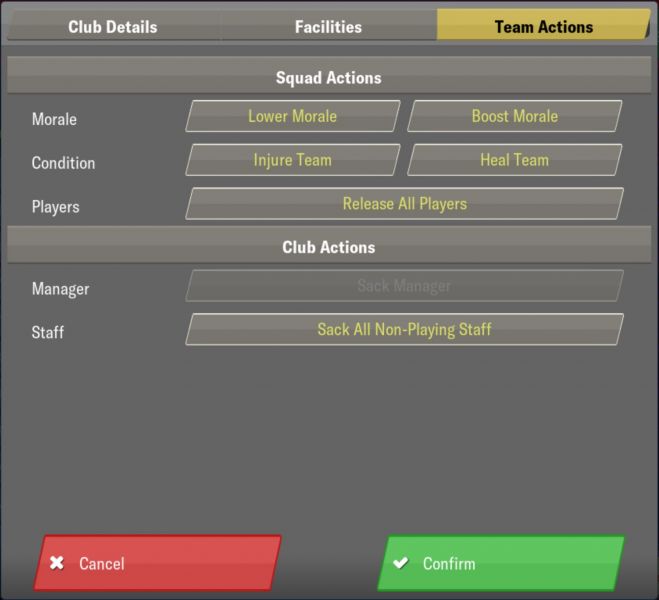 On this screen you can do squad wide actions such as lowering or boosting the whole clubs morale, injuring the whole team or giving the whole team 100% condition and releasing all the teams players if you want a blank squad. It should be noted the the injure team button won’t give the whole squad 6 month injury’s and many players will have orange injuries or simply low condition.


There doesn’t seem to be a way to use the editor change the club you are managing but you can sack a clubs manager on this page so that you could then apply for the job. You can also sack the clubs entire backroom staff as well if you want.

I hope this guide has helped show you what the IGE is and isn’t capable of and whether it is worth splashing out the money on.

I'm happy for comments but I don't want the comments to become a witch-hunt against people that choose to play using the IGE.