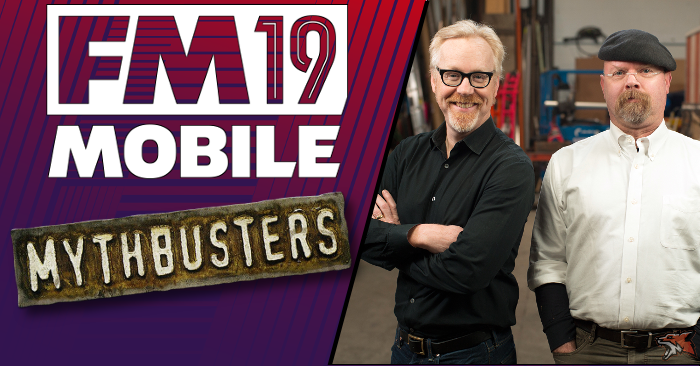 Any game that has been around as long as Football Manager Mobile will begin to develop common myths around what we can expect in a save. In this article I want to put 5 FMM myths to you the community and it is your job to decide whether they are FMM myth or fact.

We all have ideas about what works or to expect when we are playing FMM. Over the years these ideas will become a habit whether it be the type of backroom team we build or our expectations in the first season as we build our squad and look to get a tactic to work. The question is are these actually myths that we have created in our heads and that has spread around the community over the years or are actually fact.

So take a look at these 5 potential myths and then have your say in the poll at the end of the article and in the comments below.

We all love a goal scorer, they are the players that make both real football exciting but especially FMM as they bang in the goals that lead your team to glory. One of the most popular challenges here on Vibe is the 1000 goal challenge where you look to emulate the career of Pelé and get a player to score 1000 career goals.

Over the years many have attempted and completed this challenge but it isn’t always as simple as it is made to look. When people look for advice on the challenge one piece of wisdom that is offered is to not use a striker with Teamwork that is too high as it is felt that will make the striker less selfish and more likely to pass instead of shoot himself. 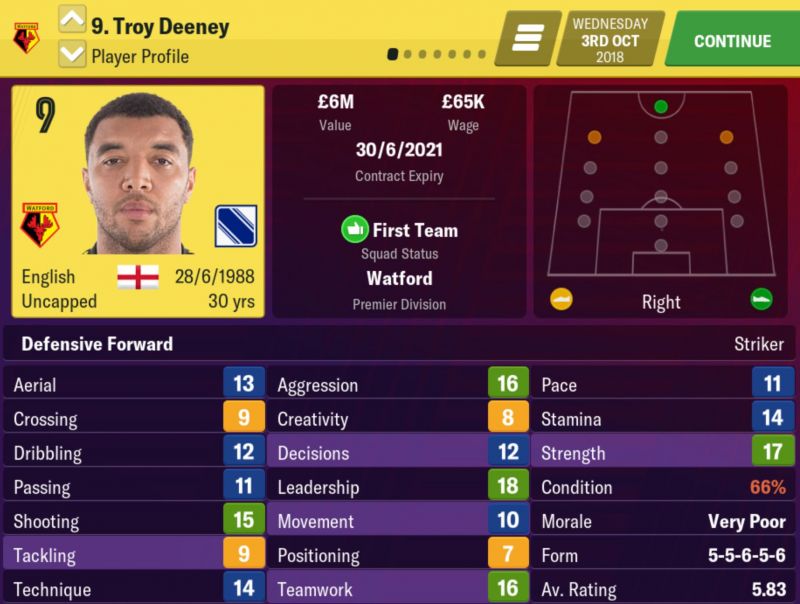 When you think about it then it makes sense, higher teamwork = the player working more for the team than for himself leading to him setting up more goals and less likely to look for glory himself. I’m not so sure as many of the attributes we see in the game are a combination of the players attributes in full fat FM’s database. Teamwork is one of those attributes as it is a combination of at least two attributes, work rate and teamwork. I would say that the harder a player works the more likely he is to get into goalscoring positions and that is something I have found as I have completed two 1kc’s with high teamwork players. That is simply my experience though and perhaps Arp and Mitrovic would have completed the 1k quicker and score more in total if they had lower teamwork.

So myth or fact?

Player Traits Make a Difference to How a Player Performs

If you go onto a players profile and scroll to the third page you get to there positions page which also contains that players traits and whether they suit a certain role or not. 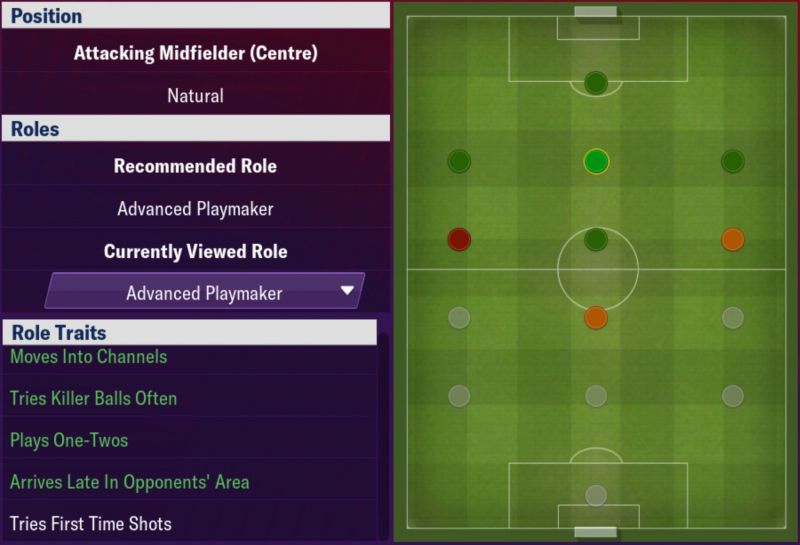 If a trait is written in green that it should benefit the role you have selected and if it’s in red then it conflicts with the role, white text is neutral. The question is do these traits actually make the player do or not do what they say and will they effect how well a player performs a certain role?

Personally I pay no attention to these traits and I have never signed a player based on them or vice versa. I solely look at a players attributes and decide whether they suit the role that I want them to play in my tactic but perhaps that is wrong and maybe I should be looking deeper into these traits and it may make a difference in how well my signings fit into my team. I’m not 100% sure that the player traits make any difference to what a player actually does on the pitch in the game but you may feel differently and put a lot of faith in them.

So myth or fact?

This is a very common one, someone’s tactic will be working well for half a season or maybe in season one but then the results will start to decline. The common wisdom is that this is the AI learning your tactic and then combatting it with there own but is this correct. This is probably giving the AI more credit than it deserves and it is a myth that even SI staff themselves have debunked.

Although it is based on the PC game this article on FMScout is worth a read but I will take an important section from it.

This is what SI employee Neil Brock had to say on the subject of of whether the AI can learn an individual tactic.

The AI does not work out tactics. What can sometimes change tactically is that AI teams depending on your own club's league table position and form, will look at you differently.

For instance, if you're say a team like say Bournemouth in the Premier League, a large number of teams, certainly in the top 8 will look at them and consider their own team to be stronger. Because of this they're likely to play attacking formations. Mid-table sides likewise will realise they're stronger on paper and again will attack, but may take a slightly more cautious approach when they're the away team. Lower ranked Premier teams will likely play a balanced formation home and away.

Then let's say by January in your first season, Bournemouth are 5th in the table and have won impressive victories. The AI managers will look at this and realise you shouldn't be underestimated. Teams will be more likely to play a defensive counter based style when coming to play at Bournemouth and be more balanced overall.

Mid and certainly lower sides in the table will play defensively. This means a tactic you had working fine for the entire system is suddenly playing against totally different tactics than in the first half of the season. Many human managers assume that if their tactic is working there's never a need to change it, but fail to take into account the fact the AI will adapt as the season goes on. Tactics however, as said above are not individually worked out.

So the big thing to take from this is that you need to either make small tweaks to the tactic but more importantly I think for FMM is that you need to keep improving the squad each transfer window if you can as the better your team and especially the depth of your squad the more likely your tactic is to remain effective.

So myth or fact.

The Squad Take Time To Gel and Learn a New Tactic

We have all been there, we come up with a new tactic and then make wholesale changes to the squad to suit it only to then start the season slowly. The question is though is that a case of the tactic or squad build not working out or is it a built in feature to the game that means it takes time for players to gel and understand a new tactic?

There are clues in the game that say this may be a fact as we see messages in the match reports saying the team was unfamiliar with the tactic or in a players profile like this one. 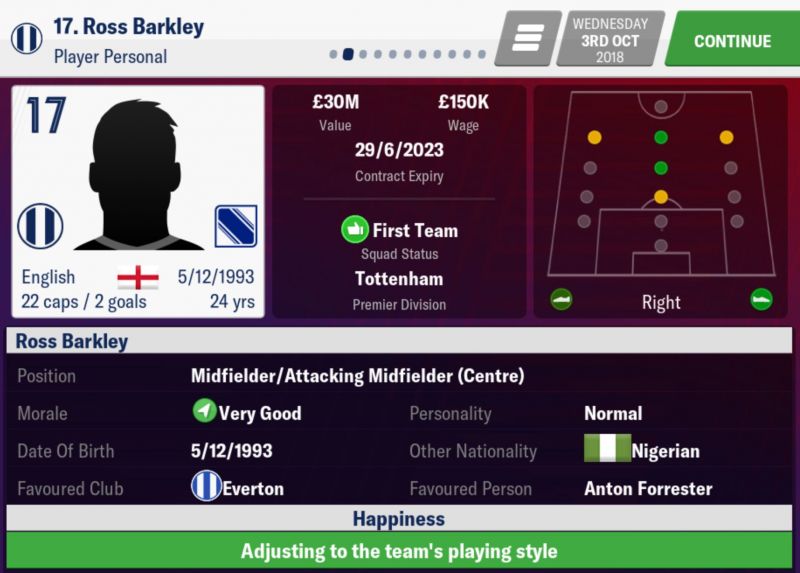 Then on the other hand we see these messages but the team start on fire including the players who are adjusting to life at a new club or new tactic. So how much do these messages effect a teams results compared to the tactic perhaps not being perfect or the squad not suiting the tactic as much as you thought it would?

So myth or fact.

Logic suggests that certain tactics are going to work better with big teams with top players whilst if your players aren’t as good you will need to adjust your tactics and I don’t think that is a myth at all just common sense. The question is whether it’s a myth that you can’t use the same tactics in the lower leagues that you can with a big team.

A good tactic can make average players better but in turn good players can make a tactic work. That means if you can build a squad that suits a tactic then in theory that tactic will work at any level of football. As an example you may want to try and play short passing football in League 2 so you need to make sure that you have players that can pass well but of course in League 2 players the number for there passing attribute isn’t going to be as high. In League 2 though a passing attribute of 12 would see a player do very well in that department of the game so if you can build a good squad of players what is there to say you can’t play play passing football in the lower leagues.

What is your experience though can you get a tactic that works a dream with a top team to work down in the lower leagues?

There we have it, that is the five potential myths that I want you as a community to either say is a fact or a myth in the poll below. I would love to hear your opinions and experiences on these so let me know in the comments below your reasons for answering as you did.