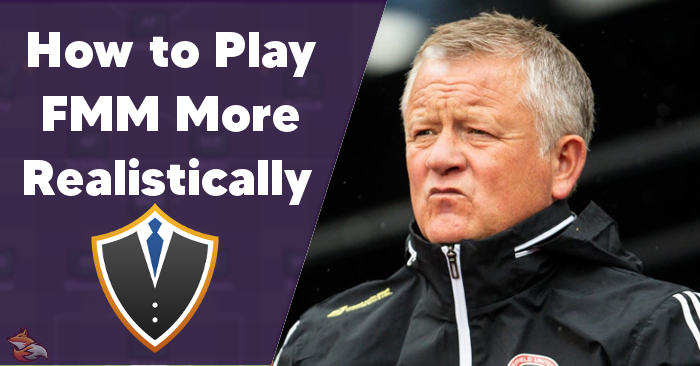 We all have our preferred ways of playing Football Manager Mobile with some of us liking just a few games whilst sat on the toilet, some liking a realistic and more in depth experience and others like myself prefer the challenges side of the game with the aim of getting players to huge goal totals etc etc. However you choose to play the game is really up to you as one of the beauties of FMM is that you decide what you want to achieve and how you want to go about it.

Many people want to enjoy the game in an immersive way and escape reality for a while by truly feeling like they are a manager of a real club in real life football. This guide is going to provide a few options you can use or ways you can play the game that will give you more of a realistic experience.

Most of these options and ways of playing have been around for years in the old Championship Manager forums and still today within the FM community. These aren’t my own rules and who came up with these ways of playing is probably been lost in the mists of the internet and time all I am doing is repackaging them to be more suited to FMM.

Note: This is not a specific challenge and you don’t have to use all these options or play completely this way. You can pick and choose what bits you want to add to a save you are doing that you think will give you more immersion and ultimately fun. 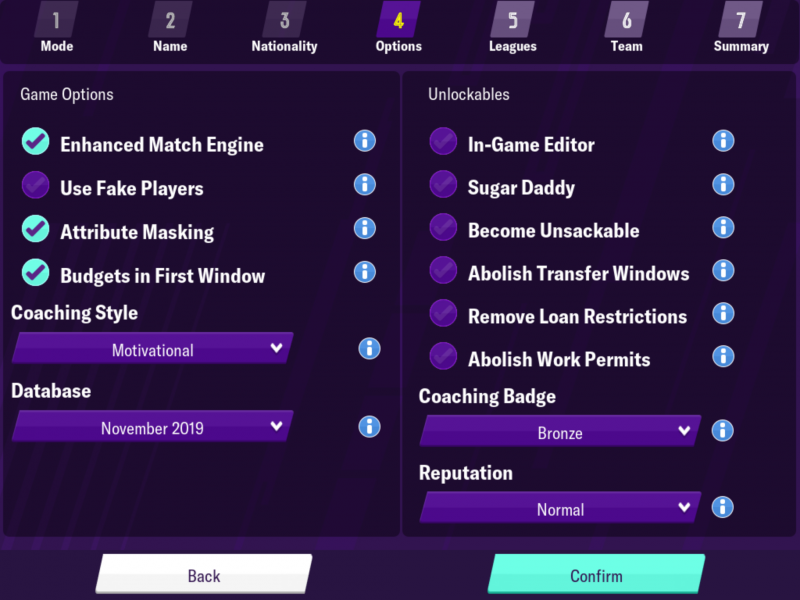 To start with you can use any ME you wish and it’s up to you if you want the player names to be real or fake. The database you use is up to you as well although of course the November one makes the squads closer to what they were at the start of the 2019/20 season.

Obviously you won’t be ticking any of the boxes on the right hand side for the unlockables as none of those add any realism to the game.

Attribute Masking: Most football managers will have a good knowledge of players in and around the leagues they manage in and of course the most famous players in the world that are on the TV every week but they can’t know everything about every player. Having this option ticked simulates that by having a few attributes blanked out on players and the only way you can see them is to scout the player or play there team in a match.

When you choose this option you will see the attributes of some of the better and more well known players at all club's but especially youngsters or players abroad you will find that many of there attributes are blanked. Budgets in First Window: This sets whether teams will have a transfer budget in the first transfer window when the game starts. This option is up to you as having no budget would be more realistic as when the game starts the clubs have spent there money and built there squads but to me buying players is a huge part of the game and I wouldn’t enjoy not being able to do some wheeling and dealing straight away.

Coaching Badge and Reputation: It is very unlikely that anyone would get a job managing a club at the levels available in FMM without having some kind of coaching qualification and reputation within football however small. That is why I have set it as a Bronze badge and Normal (Local) reputation. If you want you can set this lower but everyone who gets a managers job will have some kind of reputation within the game and wouldn’t be a complete unknown even if the general public haven’t heard of him so I think this is the most realistic setup.

When it comes to setting up which nations you load that is entirely up to you. What I would say though is the idea of playing like this is to start at the bottom of the game and build your way up so you need to load the lowest leagues in at least one nation and preferably a nation like England or France that has a deep selection of divisions and small clubs. Hopefully you will one day manage Real Madrid if that’s what you want to do but you need to earn your stripes first in the lower leagues.

When it comes to club choice you can go for the ultra realistic option of starting unemployed if you wish. If you want to start employed I think there is some consideration needed of the club you choose to ensure you make a realistic choice.

Now you have the save setup there are a few rules you can implement that can add to the realism.

Signing Players: The player search option is completely out of bounds as real managers can’t just find a player by searching through and sorting a list of players by there specific attributes. The only time you can use player search is to find free transfers as I don’t think scouts bring you reports on players that are out of contract but you shouldn’t use the attributes filters to look at the freebies.

One thing I would say is don’t trust the scouts star ratings too much and instead look at the players attributes yourself and judge if you think they are worth signing or not. Scouting Rules: Clubs in the lower leagues will not be able to afford to send scouts all over the world so neither should you. When setting a scouting assignment you should stick to the region your club is based e.g. in England you only scout UK and Ireland, Germany or France you would scout Central Europe and Spain or Italy you would scout Southern Europe. Once you move up the leagues you can relax this rule a bit so if you are in England and you are managing in League 1 you could scout Scandinavia or Central Europe and once you get to the Premier League you can start scouting the whole world if you wish.

Signing Staff: When you first start out at the lowest level you should be only signing staff who are unemployed and of the same nationality as your club (or anywhere in the UK if you manage there). As you start to be promoted or move jobs up the leagues you can then begin to sign staff from clubs in the leagues below you as it would happen in real life. Once you are into the top divisions you can then sign staff from any club you wish in the world.

Club Finances: You should ensure you work within the budget set for you at all times just as a real manager would have to. If you need or want more money you may request it from the board of course but then it’s up to them if they can provide it.

Tactics: You should devise your own tactics instead of using one from the forum. A big part of a managers job is to find a way of playing that suits the team they have and they have to do that themselves as they don’t have a big list of tactics they can copy. That is what you should do as well although just as a real life manager can be inspired by other managers methods so can you it’s just you can’t copy instruction by instruction what someone else has done.

Moving Clubs: Just as a real manager would do you may move clubs but you need to consider if a move would be realistic or not. That’s to say if you are a manager at a National League South team it is highly unlikely you would move to a club in the Portuguese 3rd division simply because the finances wouldn’t be enough to make the risk of moving country worthwhile and it’s unlikely a team in Portugal would have heard of you anyway. You might consider moving to another part of the UK though so a job in Scotland or Ireland wouldn’t be completely out of the question.

As I said at the beginning these aren’t concrete rules that you must follow to the letter but instead are just some suggestions of ways you can make the game feel a bit more realistic and immersive if that is what you are looking for.

I’m sure I have missed a few other ways so if you have your own suggestions please let me know in the comments below.