I think the majority of football fans were caught off guard the other day when Liverpool Football Club announced a double signing which easily ranks as one of the club's best days in the transfer market. The first signing needs no introduction as Thiago Alcântara of Barcelona and Bayern Munich fame was welcomed through the Anfield gates, leading to excited reds and jealous rivals as Klopp added one of the world's elite midfielders to his ranks. The second addition however of Diogo Jota from Wolverhampton Wanderers for a fee in the region of £40 million really got tongues wagging though! The deal was rumoured then done in a matter of hours as fans of both clubs were wondering why? Why did Liverpool pay so much for a player Wolves fans call inconsistent and patchy? Why did Michael Edwards and the rest of the Liverpool transfer committee decide Jota was the one to be brought in?

Plenty of sporting sites are answering similar questions with the use of their analytics and analysis tools but here at Vibe I'll try and answer this question with Football Manager 2020 and some logic.

Who Is Diogo Jota?

Diogo Jota is a 23 year old Portuguese international who started his professional career in Portugal before leaving for Atletico Madrid in 2016. However his time in the Spanish capital was brief as he soon returned to Portugal to play for FC Porto on loan which is when he met Liverpool's current assistant manager Pep Lijnders. Jota's next destination was to the Midlands of England as the left sided forward joined Wolverhampton Wanderers on loan before securing a £14m move to the side. Jota helped Wolves establish themselves as a solid Premier League club while also enjoying himself in Europe as his side reached the quarter finals of the Europa League losing to eventual winners Sevilla, which would be his last appearance for the club with Liverpool making their move.

How Diogo Jota Will Be Used At Liverpool?

Before we work out why Jota was identified as a suitable back up and possible successor to our current attackers I think it's important to look at how the player will be used at Liverpool. Firstly the versatility of Jota would have appealed to a manger like Klopp who has already shown a willingness to favour these types of players with examples like Milner and Oxlade-Chamberlain coming to mind of players Klopp trusts in multiple positions. Understandably I don't expect anything too wild positionally is planned for Jota but he easily can fit in on the right, left or even centrally which just adds options to the squad. Centrally however I see his opportunities limited as Firmino is obviously the first choice with the new addition Minamino seeming like his logical understudy. When we look at Jota's career though we can see the two footed winger likes playing on the left and cutting in into central areas, which is a tactic Liverpool utilise often as that's exactly how Mane and even Origi play that role. Another historical factor to consider for this being the plan for Jota is in Mane's first season at Liverpool the Senegalese international spent the majority of it as a right winger where he found massive success, he was only moved to the left to accommodate Salah.

Now everything is starting to click into place as Jota will be the understudy to both wide players but I expect he'll stay almost exclusively on the left, as either Mane's direct replacement or if Salah is replaced and Mane moves to the right. Klopp has also shown a willingness to play Mane or Salah central at times so I could see these three on the pitch at the same time, especially if we're looking for pace which Firmino and Minamino don't really offer. As we have central cover in Minamino and since Mane is more than adequate cover for Salah on the right if he was ever unavailable I think it makes sense the club were looking for a versatile left winger who likes to cut inside. Liverpool have had massive issues in recent years of the backup players making us play a different way to how the first team do so looking for a similar player to how Mane plays could ensure we don't need to change our style due to personnel in the future.

Searching For Mane 2.0
Attempt One

Using the in game search feature of FMM 2020 I searched for a player using the "template from own team" feature, with it obviously set to Mane.

As you can see this search brings up a high calibre of player with Mane and Salah both appearing. However it's common knowledge Liverpool are almost exclusively in the market for under 25 year olds which narrows this search even further leaving us with Leroy Sane and Nicolas Pepe. Pepe was a player Liverpool were heavily linked too last year before his move to Arsenal while Sane also recently completed a big money move, considering the fees spent here we need to downgrade our search slightly.

For the second search i dropped each of the targeted attributes by 1 while also adding the age filter to show 19-25 year olds only.

Another fine list of players of which are likely unavailable to Liverpool due to playing for rivals or for the fees involved, not may would be happy playing second fiddle to Mane or Salah either. I do find it interesting however that this search does bring more players to the table Liverpool are constantly linked with being Mbappe, Depay, Dembele and the already discussed Pepe.

For this attempt I dropped the searched attributes to 15 and kept the age filter.

This search brought more names to the table without really adding much. Jota still hasn't been found unfortunately but I find it interesting how this search includes Minamino and alot of older FMM wonder kids that never really made it to the heights FMM predicted like Gelson Martins, Keita Blade, Gerard Deulofeu and Inaki Williams.

Okay this plan clearly isn't working as well as I hoped with Jota not appearing yet (he would have on the next search, his 14 Technique was the issue) so its time for a new plan.

Liverpool aren't looking for a ready made Mane replacement so it's not fair to be comparing a 27 year old Mane to a 22 year old Jota. Thanks to @samhardy I've been able to source a FMM16 screenshot of Sadio Mane so what would happen if I searched for a 23 year old Mane instead. We brought Mane to develop him in the hopes we could improve him so it makes sense Klopp and his team feel they can do the same with Jota. 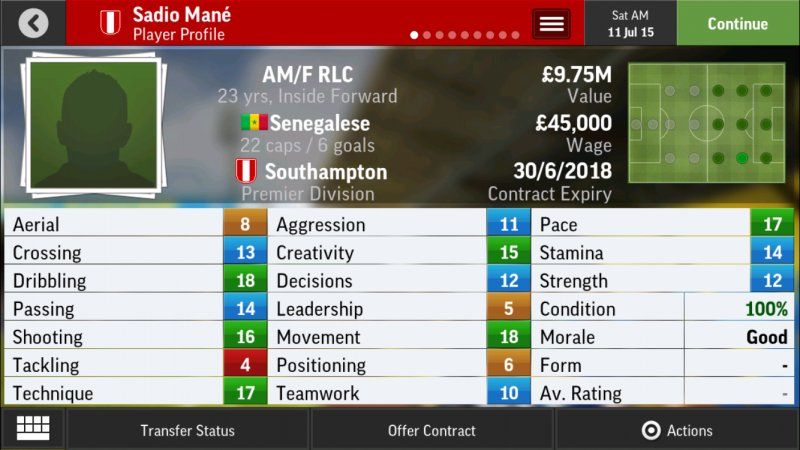 Surprisingly Mane was pretty special on FMM16 but I searched for his details with the 19-25 age filter on like I did previously.

Okay not really surprising the results were limited but Mbappe is the only result.

A couple more players come up this time but they're unattainable ones we've previously discussed or unproven.

One more stat dropped across the board.

Once again this search makes fascinating reading as it's full of wingers we've been repeatedly linked to like Sancho, Pulisic, Under, Dembele and Depay. Still no Jota though which is slightly disappointing.

The final search saw the stats dropped again which brought up too many pages of results so I did also include a dark green AML tag just to limit the amount of screenshots I'd need.

And there he is second from the top on the third page.

Now we've found him I thought I'd also include the search with the in England filter selected as I think there is a benefit to being Premier League proven and settled in the country. To be honest the most surprising thing about this list has to be the combination of top Premier League players like Rashford, Martial, Jesus and Sterling and the mediocrity like Deulofeu, Redmond and Andreas Pereira. Let's hope Jota Will be a star at Anfield and not an expensive flop.

While I agree this may look like alot of leg work to find the player in question (damn his low technique, without that he'd have shown up earlier) I think it shows the method in the madness. Liverpool knew what they needed and they went out and found an attainable player for a reasonable price in the market. When you consider the fees paid for Dembele, Mbappe, Pepe, Sane and even Sterling Liverpool did incredibly well identifying Mane in the first place but by following that blue print they might have unearthed another such gem. Jota was signed for £40m which is somewhat reasonable, he's Premier League proven, settled in England, plays in the right style, versatile and very much looking like the Mane transfer all over again. That's alot for the young Portuguese man to live up to but if he follows the same road map as Mane we've got an absolute steal on our hands and Mane's long term successor.

As always thank you for reading and any comments would be appreciated. If this goes down well once 2021 is released i might do a part two looking at potential Salah replacements. Finally I'd like to thank @Ianfor his input.