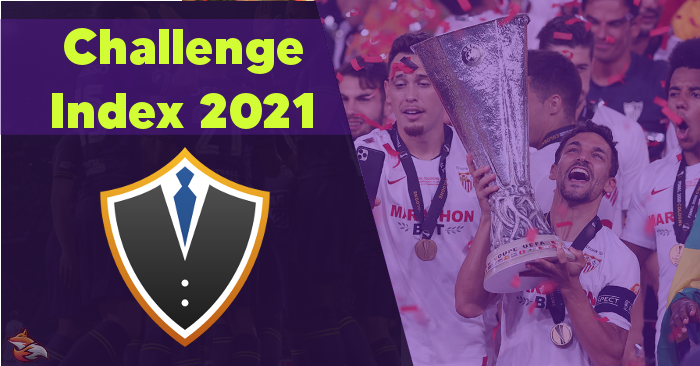 W﻿elcome﻿ to the FMM21 challenge index.

“I” have posted many of the challenges from previous years but not all of them so you can find the FMM20 index here.

I will then add the challenges that are created this year.﻿﻿﻿

Badges of Honour - This is a series of different challenges that earn you badges once completed. This link takes you to the main OP with links to all the various challenges.

The Vibe Triple Crown: Complete﻿ the 1kc, Double Trouble and Triple Threat challenges and get your name in the hall of fame.﻿

The Percentage Game: Get a player to score as big a percentage of your teams goals as possible.

Striker Peak Years Challenge - Pick a player in his peak years and get as many goal contributions as you can in 5 seasons.

Bad Boys From Brazil - Sign up your troublesome Brazilian duo and cause carnage for 2 seasons in this fun challenge.

The Last Hurrah - Pick a player 35 or over and go for either goals or assists over 2 seasons.

The Late Bloomer - Pick a player 30 or over and score more goals before he retires than he managed previously in his career.

Creating a Club Legend - Pick a club and player before beating that clubs all time top scorers goal and goal per game total.

The Goaltopia Challenge - Pick some players and get as many goals as you can.

The Strikers’ Striker Challenge - It’s hard enough to score as it is in the Premier League let alone with a Vanarama North player!

The Golden Boys - Replicate the exploits of these Premier League top scorers in this 7 season challenge.

The New Stadium Challenge - Who can have the most stadiums built this year?

The Neil Warnock Promotion Challenge - Win promotions and get to the top of the leaderboard.

The Being FMMed Challenge - Turn frustration into fun with this challenge.

Averaging Out - Can you cope with losing your star players not just in the transfer window, but every month?

The Chelsea Wonderkid Graduate Challenge - Take four of the many wonderkids that have come through Chelsea and look for goals and assists.

Defence is The Best Form of Attack - Get four defenders to score more league goals than they concede.

Gold Cup Players Challenge - Select a player from each nation that has won the Gold Cup and look for goals and assists.

The League Standards Challenge - Make 6 different squads over 6 seasons using players from the top 6 leagues at the start of the game.

No National Physio Challenge - Your star man gets injured whilst on international duty? Tough luck, he won't be available again!

It’s A Long Way To The Top - Can you work your way up to becoming a superstar manager from absolutely nothing?

AFCON Players Challenge - Select players from every nation to win the AFCON and get goals and assists to score points.

Copa America Players Challenge - Select players from every nation to win the Copa America and get goals and assists to score points.

The Uk Goal Challenge - Beat the season record for most goals in Wales, Northern Ireland, Scotland and England.

The Manager 1000 Goal Challenge - Get your teams to score a 1000 goals as quickly as possible.

How Far Can You Take Them? - How long will it take before loyalty starts to come at a cost.

The Impossible Challenge - Nothing is impossible... A stupid and factually incorrect statement but here’s your chance to prove that this challenge is very much achievable.

The Champions Streak Challenge - How many Champions Leagues can you win in a row?