How to play Football Manager Mobile 21 - For Beginners 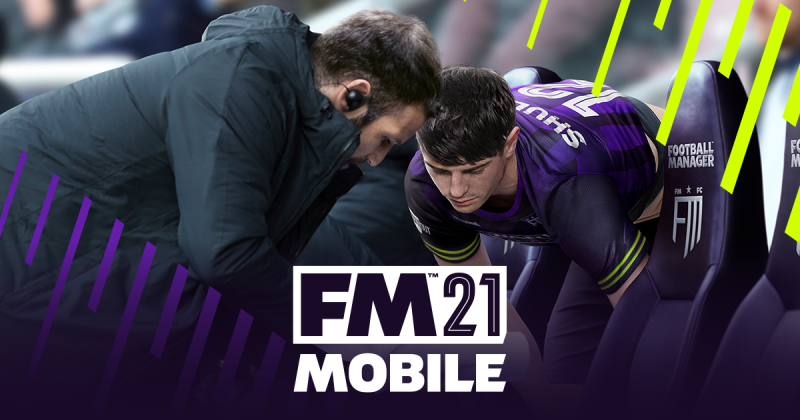 Hope this finds you all well,

This is just a post to help those players that are new to this Football Manager. The game has so many different aspect's which is why we love it, but it can be confusing or overwhelming if your coming to it for the first time. As always with some of my post's, this is a very rough guide on how you can just pick up & play the game without thinking too much. This is not the right or wrong way to play & it is encouraged to find your own style of Football Management.

Firstly, The game gives you the chance to manage in 24 Countries, which is a lot. The club you decide to manage can be based on anything - winning trophies, getting lower teams to the top or being a club which holds meaning for you. The general consensus is that when you start, it may be easier if you are a club you are familiar with & know the players for. Once you have chosen, every club with inform you of the board's expectation ( This is your most important goal & the most important thing to keep your job). Alternatively, once you have chosen the country, you can start unemployed & work your way up the ranks.

Everyone plays differently & has varied priorities but one of the key priorities to me is the foundations of the club - The stadium & the Facilities. In reality, the bricks & mortar of the club will be there long after the managers & the players. This was the 1st point listed out by Sir Alex Ferguson in his "Steps for Success" - Start with the foundations. In the game, you can request the board upgrades the Stadium, 1st & Youth team facilities. You can also request affiliate clubs proving a lasting link with the club.

The managers option's screen is fantastic & basically provides you the chance to say what manager you want to be - from very hands on( Handling Training/ Youth Promotions etc) to very hands off ( Delegating it all to your Assistant & Coaches). If you are new to the game, maybe delegating more of these would be better to just pick up & play FMM21 with the option to take more control as you wish.

The club staff screen is very important & can have a huge effect. For me, Gold & Natural coaches can have a huge effect on a players development. In addition to this, Prevention Physio's can help reduce injuries to top players greatly. Therefore, in my opinion, it is very important to improve staff member's whenever possible - From Bronze to Silver or Silver to Gold badged.

The Club Finances are also a huge part of Football Manager. The main reason is obviously stability as a club losing money every week will eventually be in dire straits or bankruptcy! Also, There is a big tactical side to the transfers as spending big one season & not gaining promotion etc, may leave you with no funds next season. This said, you need to be very careful with this & try to keep the finances screen as Green! If it turn's orange or red, it means action is definitely required - Eg: Sell players etc.

Club Training is significant & can make a big difference on the pitch. Once you have found the tactic you want to play & the roles within it, you can set the players training regime.  In the training screen, you can specifically input which role it is you want a player to learn as well as a specific attribute to focus on. This is something which you can delegate to a coach & they will be in charge of training. 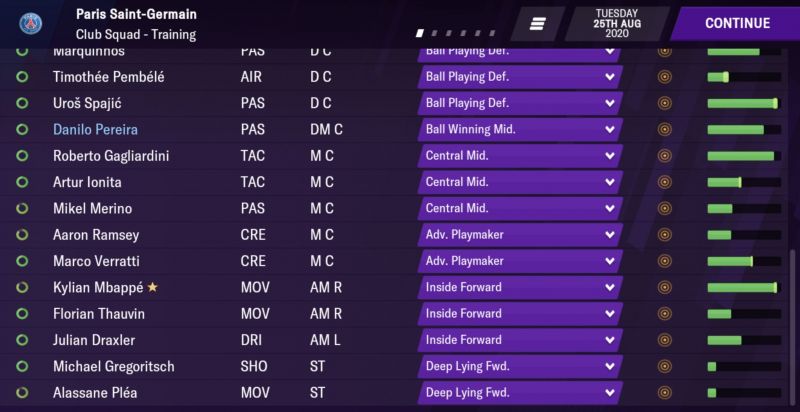 Although there are no action's on these screen's, it is one of the most important.  The Team Summary page provides an overview on where you club stands in comparison to the league you are playing in - PSG for example have lots of green & a only a few reds, because they are by far the best squad in the league. In addition to this, the suggested XI provides you a snapshot of your best XI based on the opinion of your Assistant Manager. This mean's player's stars rating are only a reflection of how good players are within your team. I would advise new players to give these screen's a glance to see where the club stands as it is. 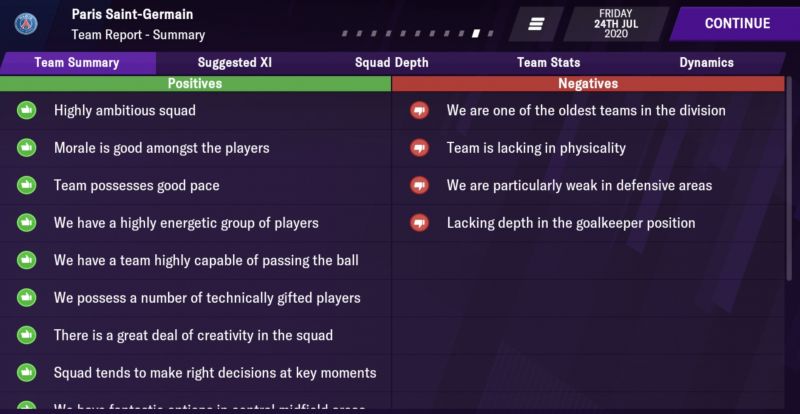 Tactic's in my opinion are the most important of Football Manager. The tactic implemented can reflect your football playing style & result in absolutely beautiful football on the pitch. This year, FMM21 has made it even easier for beginners to create the best tactic for the team you choose. I have detailed the process of creating the tactic below:

Of course, you can also create a tactic yourself through looking at squad depth & identifying best/worse position's as well as area's with lots of players & those with few players.

Assessing the squad is the next thing to do and probably the most fun too. Through assessing the squad, you can learn which players should stay & which should go. Assessing the squad relies heavily on players individual personalities & attributes. There are a lot of attributes & this process can be confusing. Luckily, in training screen, it provides you the Key Attributes for the roles your assistant has recommended to you ( as seen below). A good way of assessing the squad is bringing up the player search screen & assessing each position with those player templates, you can include your own squad in the search to see if you already have the 2x best sweeper keepers OR is there someone reasonably priced who fit's the role better?

Transfer's in & out can make OR break a season on Football Manager.  I think every manager make's transfer's differently & transfers into the club are usually made in the following ways:

Player's out are mostly made due to quality & not being good enough for the squad going forward. Be aware of the effect this may have though based on the squad dynamics. 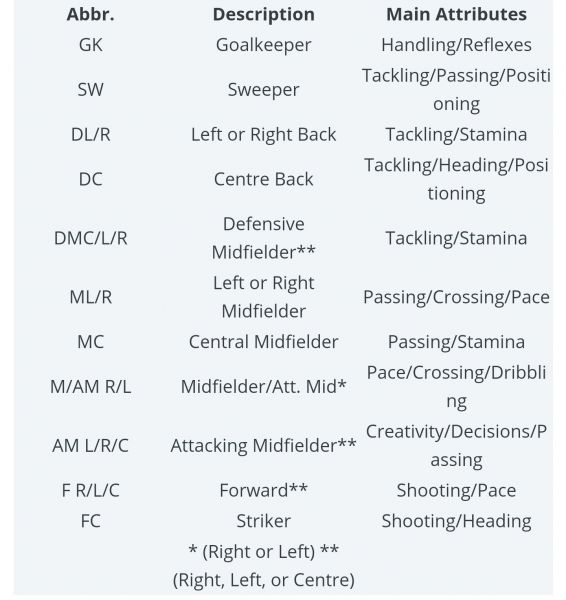 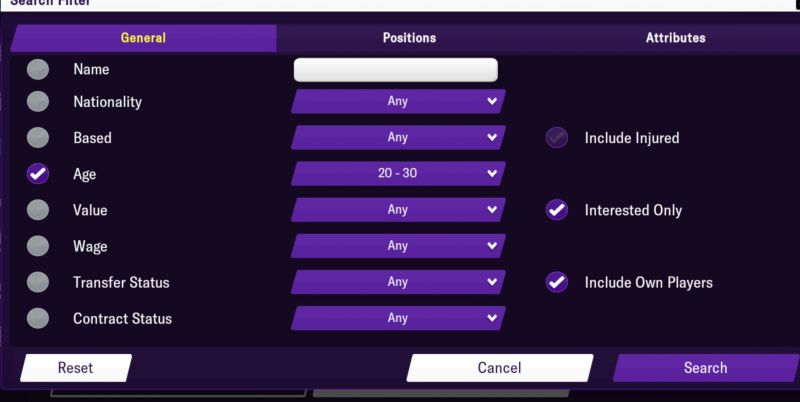 The match day is what you have been waiting for- all the tactics, transfers etc has all been building to this!  I would recommend watching the match on the default settings chosen or with extended highlights. It is a good speed & provides an opportunity to see how your instruction's are playing out on the pitch. In term's of the screen's, the overview screen & player rating screen's are my personal favourite. Most importantly, you want to make sure your shot's & shot's on target are more than the opposition - at the end of the day, goals win matches. Everyone makes changes in-game differently but the game lay's out good changes to make for you:

Football Manager can provide some issues which you need to respond to the press above, these can vary but are mostly for - Outstanding performances, Poor form or Red Card's given. Firstly, with Red Card's, you can decide how harsh or lenienty you want to be with your player. I normally choose a 2 week fine as red card's every week are not helpful to the squad & the player has the learn. In contrast, with comments on players playing well, I normally build this up which normally helps with confidence & maintain's the players good form. Finally with poor form player's, It is good to check the players average rating & make an informed reaction, above 7 rating & I normally tell the press the player is doing fine.

Finally, the last day of the season has come & you can assess your 1st season as manager. The ultimate reflection of the job you have done is in board satisfaction & hitting their expected finish. For PSG, success may be reaching for another Ligue 1 title whereas for Sheffield United, just staying in the Premier League is success. Rome was NOT built in a day & Football Manager gives you the chance to build - just like Alex Ferguson at Manchester United!

I hope this help's any new players to Football Manager Mobile 2021! So much of Football Manager & Football in general is opinion & everyone likes doing things differently. This guide is for those players who are just lost & find the whole game daunting. The game has tried, especially this year to almost gift you with a template on how to play BUT with almost endless scope on changes you can make to take full control yourself!😊