How To Sell Players For $$$ (Negotiation Techniques)

This guide is specifically about teaching you the art of negotiating a player sale in Football Manager Mobile 2022, meaning what to do when a bid from another club is already on the table and you WANT or don't mind selling the players. Now obviously you'd want as much money for him as you can get, but how?

Of course there many other questions people tend to ask regarding transfers: price negotiations techniques during auctions, ways to buy a player cheap, how to negotiate player contracts or selling players when no clubs want to make an offer. We'll be keeping this guide focused and concise for now, so let's save those for another time.

Minor caveat before we start, this guide is made specifically for FMM2022 and the AI negotiation code can change between editions (and they have). While the broader techniques here can probably be applied for future versions or if you're on an older version, the specific observations about the responses may not be exactly the same.

I'll be using two examples and covering the concepts as I go through them, then I'll summarise the concepts at the end. We are also using regens so there's no pre-conceived notion of a player's value.

So the first example we have is Dannie Anderson, his value is 3.5m but Bristol City is offering 5.25m here. 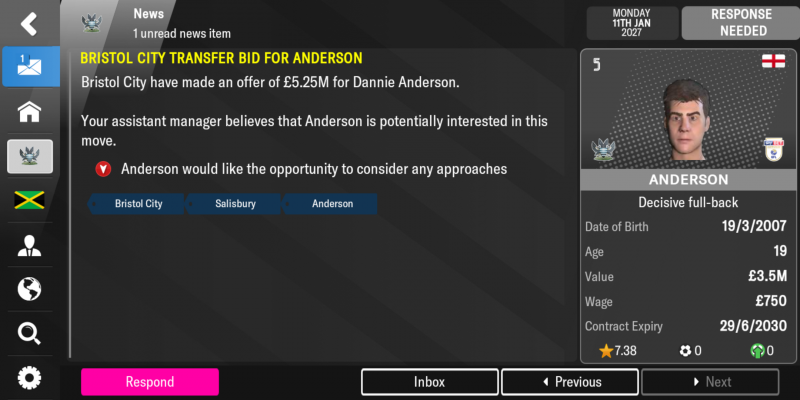 Every Negotiation Step of The Transfer

The initial counter-offer is incredibly important, the higher the initial "reasonable" counter-offer the higher the final negotiation price will be. I'll start my valuation at 17.5m. Why that value specifically? It's a ballpark estimate based of my experience. I'll tell in detail about how to make a good estimate during the 2nd example, because I'll need the comparison to explain it. 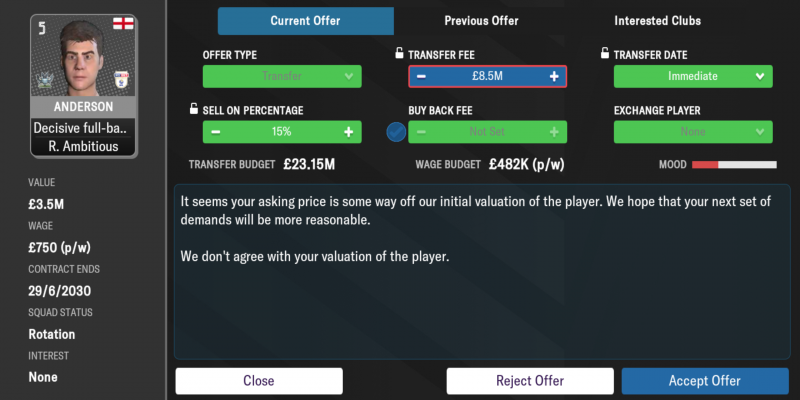 So first thing you notice is that the valuation was deemed "reasonable" by the AI, because they've shifted their valuation. It means that we have established a range to work with, between 8.5m to 17.5m

Take a small step down in your valuation, I offered 16m but I actually don't find the size of the step to be that crucial. We have quite a lot of space to work with: a total of 5 offers (or 4 offers that will return a response) unless we do something highly unreasonable. 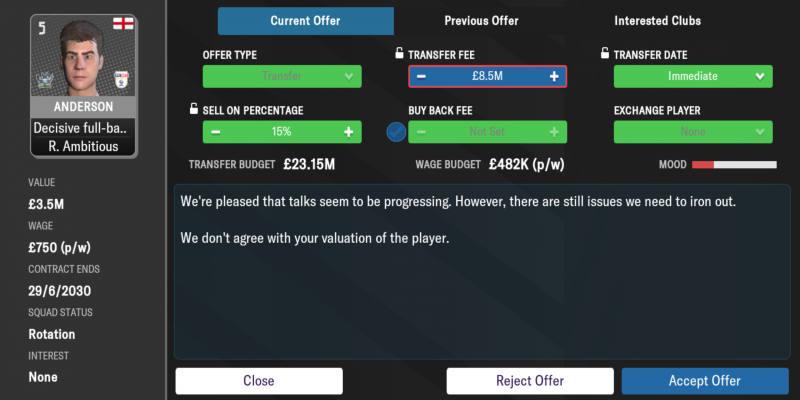 As you've noticed, their valuable did not budge. I have not gone down reasonably far enough for them to increase their price.

So I take a larger step, a 14m valuation this time. 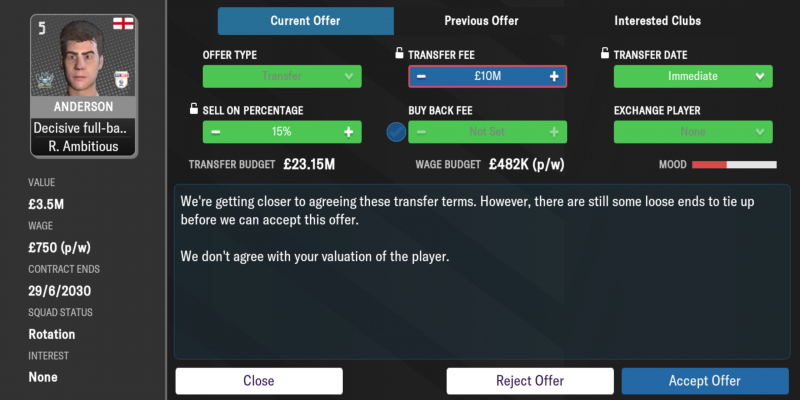 They've upped their bid again, which means we are on the right track.

I lower my valuation to 12m . This will be the final one that will still return a counter-offer. 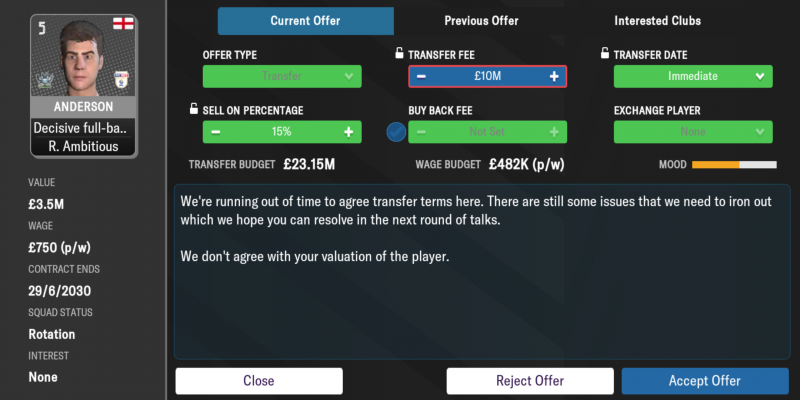 No increase in what they are offering. Take note of the number, 10m.

I call it the final push, where I push the final amount just slightly higher. 10.5m bid. I'd consider this step optional if you're DESPERATE to sell the player, you wouldn't want to be stuck with a player just because you wanted a tiddly little bit more. In my experience, you can often push it up by 1-2 steps.

I took 2 steps up this time and it happened to have worked. However keep in mind that even if Bristol City's highest valuation is actually 10.25m, they will not offer that to you as this is the 5th offer. 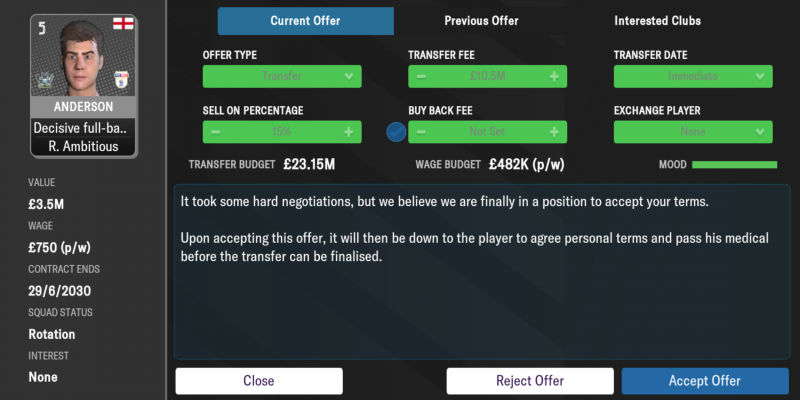 Next up we have Greg Forster, we have a 750k bid from Birmingham with a 775k player valuation. 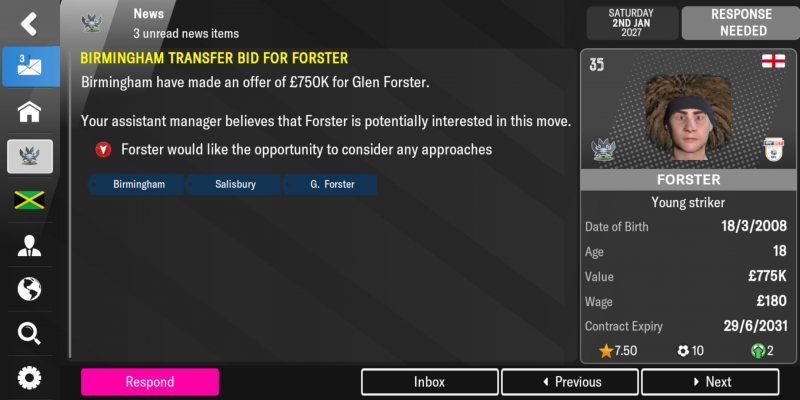 My first valuation is 12m, notice how immediately my ballpark estimate is of a much higher multiple than Dannie Anderson. Remember the lower the value in FMM, the higher you can mark up your valuations. 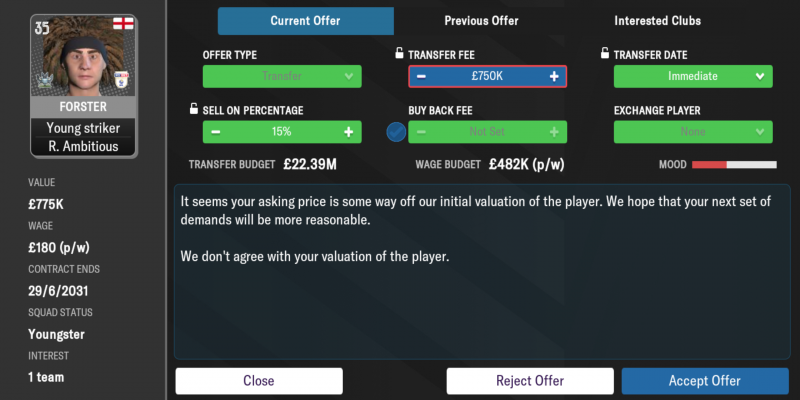 It seems like I've actually gone too high this time, but again I've got more than enough space to work with. I'll illustrate my point about more multiples at lower valuations in the next offer.

I counter-offered with 7.5m this time, 10x what Birmingham offered at first. 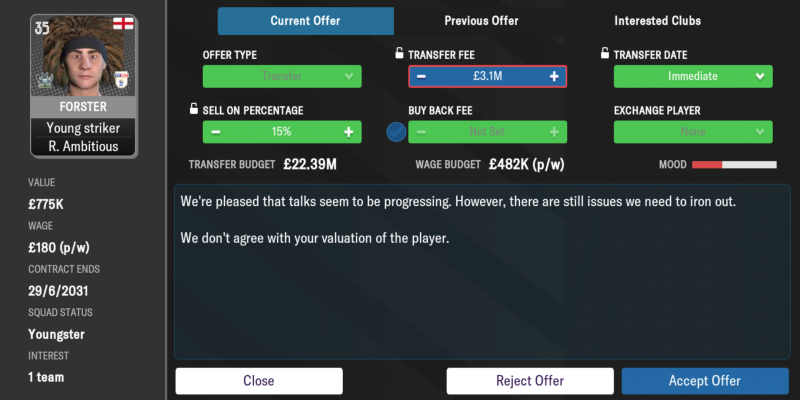 We have a bite, even at 10x. And needless to say if I had opened with a 52.5m valuation of Dannie Anderson in the previous example, not only would I definitely have gotten no increase in the offer there is a chance the negotiation would have instantly ended.

It is important to note that the reverse is also true, at higher valuations the multiples tends to be lower. You usually don't really push a 50m player out with for 2x of their initial offer. 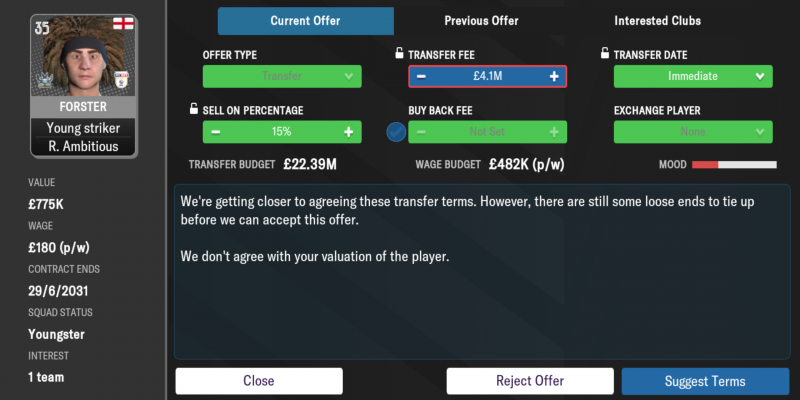 Birmingham raises their price to 4.1m 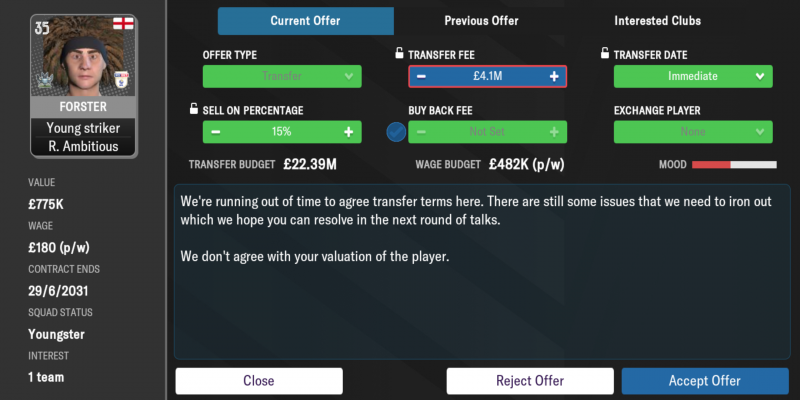 But they are holding firm to 4.1m

Again the last option is the most dangerous one to make. I'm only asking for 4.2m because I've got a 4.5 year contract with a relatively young player that the coaches think still has potential to grow (star rating).

Of course the coaches are wrong which is why I'm selling him, but that's for another guide. Point is if the coaches still think he has potential, then so does other clubs. Even if the sale doesn't go through here, I'm likely able to garner interest from other clubs. 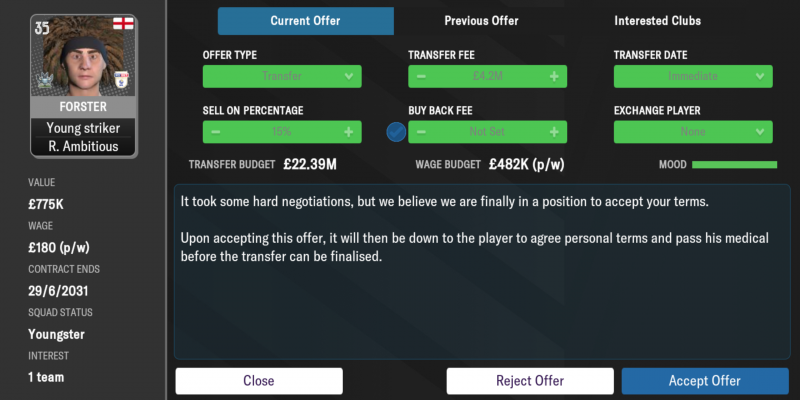 2. If a valuation is deemed "reasonable" by the AI, their valuation will increase. If it remains the same, it's time to increase the step downwards.

3. Do not worry too much about the exact size of the price step down, you have 5 offers (or 4 that will return a counteroffer) unless you do something extreme, that is more than enough space to work with.

4. The response after your fourth offer is likely very close to the final price you are going to get for the player. Send your last offer with this in mind.

5. You can push the final price just 1-2 steps (number of times to click the "+"), but I'd only recommend doing that if you are OK with the player remaining at the club or are confident more bids will come in for him.

6. You tend to be able to mark up players more at lower valuations, conversely you won't be able to get this many multiples at higher valuations. Here are some of the top of my mind for reference

### These are the initial ballpark estimate values, not the final sale price. DO NOT expect to sell at this price###

Exceptions to The Examples Above

Oh I'd love to have an example for every situation, but this are just some extra factors to consider should they be relevant to you.

7. Natural offers that come in tend to result in a higher final selling price than if you had offered the player out.

8. Take note of the clubs that are bidding for your players. Obviously we know about the rich clubs tending to bid more, but you can squeeze extra money out of clubs that have recently sold players for big money.