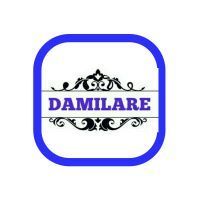 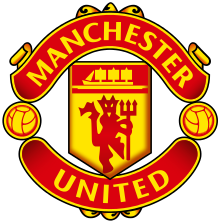 It was always going to be a challenge replacing Sir Alex Ferguson after the Glaswegian spent 27 glorious years in charge at Old Trafford, but even so not many could’ve envisaged that the club would be on their third permanent manager in the fourth season since his retirement.

That is exactly what has transpired, though, with Jose Mourinho the latest managerial candidate tasked with bringing the glory days back to the Theatre of Dreams after David Moyes and Louis van Gaal failed to so.

United are crying out for an inspirational figurehead (in the Sir Alex mould) to create a new, exciting dynasty at the club and as Mourinho has discovered so far in his short reign, it is some challenge. So, could you be the person to finally fill Sir Alex’s sizeable shoes?

By their lofty standards, the 2015/16 season was a pretty poor one for United as they crashed out in the group stages of the Champions League and relinquished their place in the top four, finishing fifth in the Premier League.

A first FA Cup triumph since 2004 papered over some of the cracks, but clearly the board want more success on the pitch this season as they sanctioned a lavish summer spending spree.

Consequently, the expectations placed on you in FMM17 have been ramped up considerably. Ed Woodward is fed up of watching his expensively assembled squad scrap for fourth place; he wants a first Premier League title win.

There’s very little margin for error, here. The minimum expectation placed on you is to win a first Premier League title since 2013 while you have a straight choice between reaching the FA Cup final and winning the competition outright. Tricky.

Making things easier is the fact that despite the club spending around £150m this summer, there’s still a very reasonable budget of 63.08m to work with... 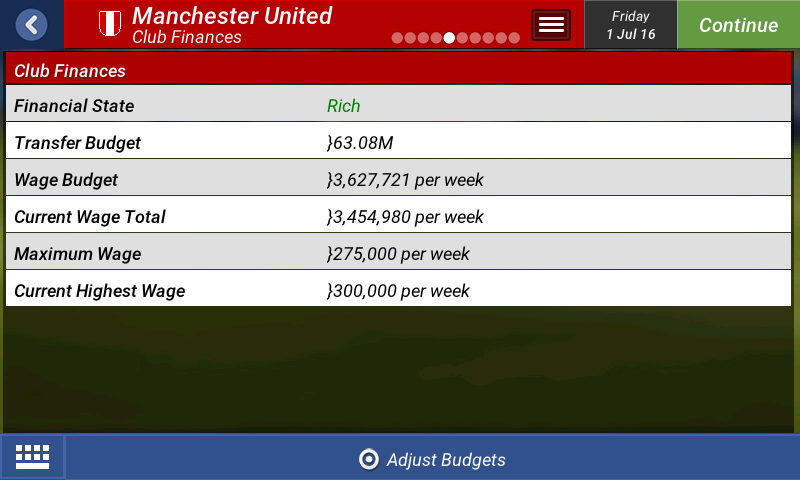 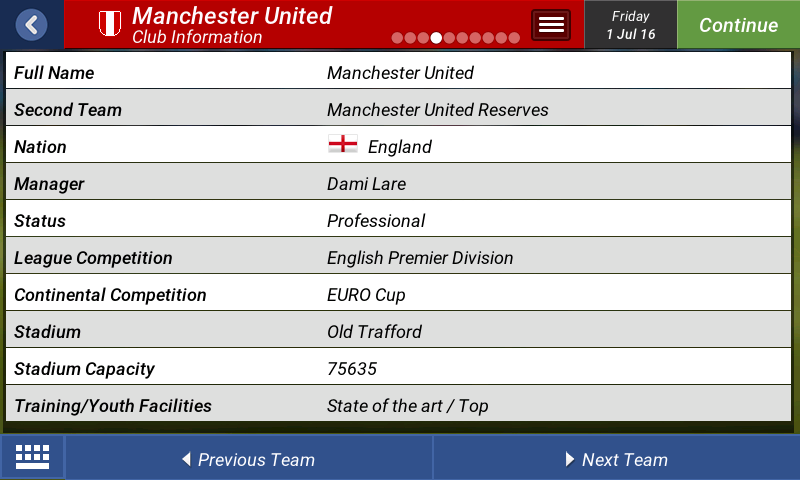 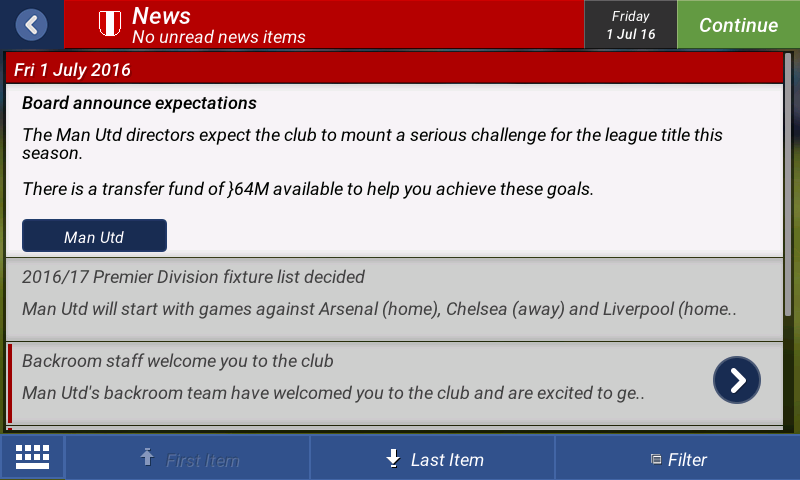 With United’s squad, we’d recommend going with either a 4-3-3 or a 4-2-3-1 system for most matches as those suit the players at your disposal most.

A thing to bear in mind this year is that the AI managers are much more tactically astute, meaning it is essential to make sure you master playing in two or three different formations to counter specific threats.

One of the main things to consider is how to get the best out of your key man – who on FMM 17 is undoubtedly Paul Pogba – which will determine whether you tend to go for a two or three man central midfield. Control in the middle of the pitch and getting pace and creativity around Zlatan Ibrahimovic up front is also fundamental. 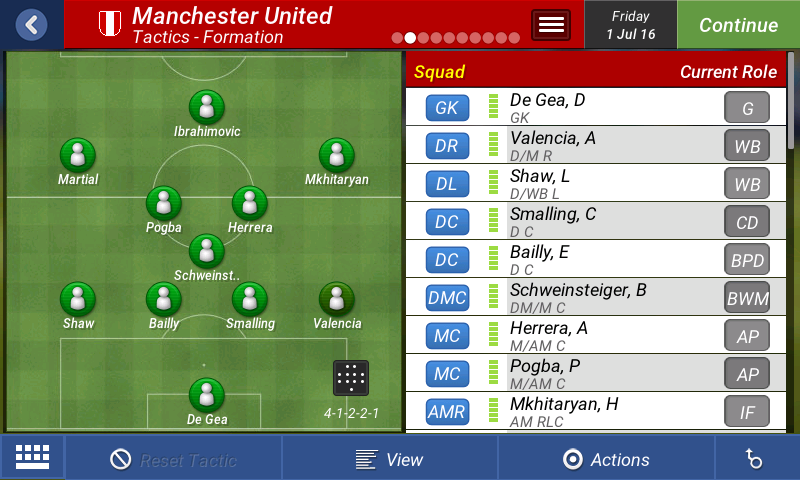 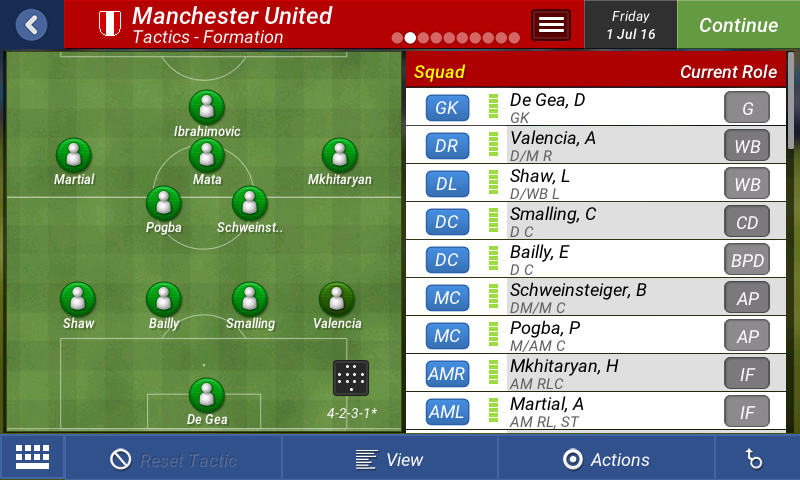 As they say and I quote"picture speaks more than a thousand words"..so below is the image of the squad: 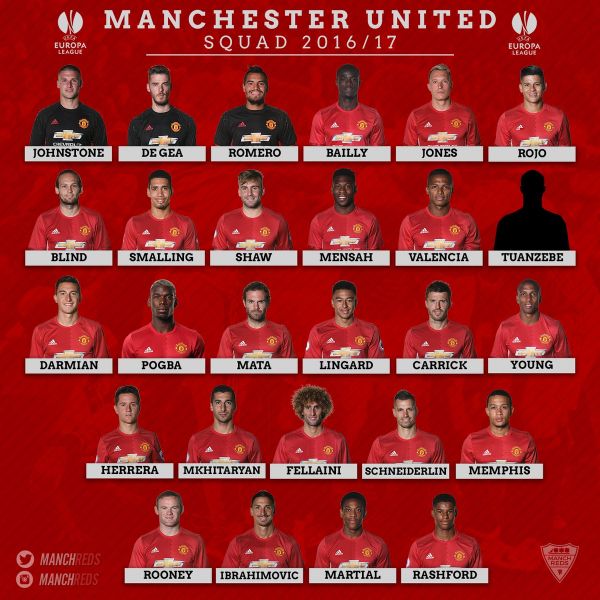 No surprises here, picking out three key players you’re going to leave on heavily was a relatively straightforward task.

Just imagine where United would be now if they hadn’t had David De Gea performing heroics in goal over the past few years? The Spaniard – as is the case in the real world – is one of the finest goalkeepers on Football Manager Mobile 2017, possessing world-class statistics such as 19 for reflexes and 18 handling. His contract has three years to run and we’d advise extending that ASAP. 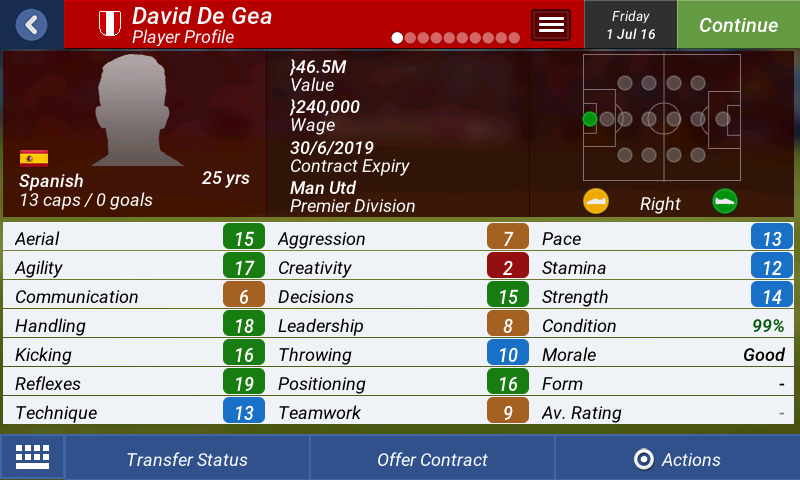 The Frenchman may have had an iffy start at United since his world-record move from Juventus in August, but he is undoubtedly an excellent player and his stats on FMM 17 are frankly pretty frightening. The key with Pogba (as is the case in reality) is finding which role in central midfield suits him best and for us, he was virtually unstoppable playing as a box-to-box midfielder in a three-man midfield. 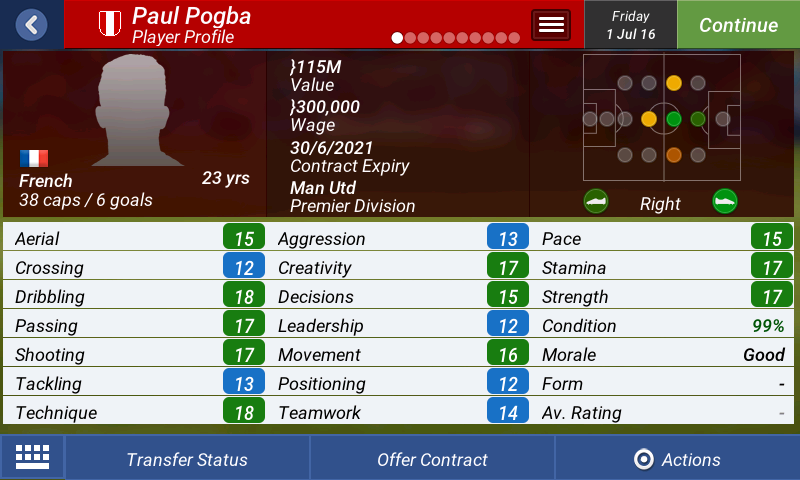 Although he turns 35 in October, Zlatan Ibrahimovic will be absolutely pivotal in your first season, at least, and you should be able to eke out an extra year from him at his peak too. Of course, Zlatan is not a long-term player to build your team around, but with big targets to reach straight away, there is no-one better to have leading your line. He also makes an outstanding tutor for your young forwards. 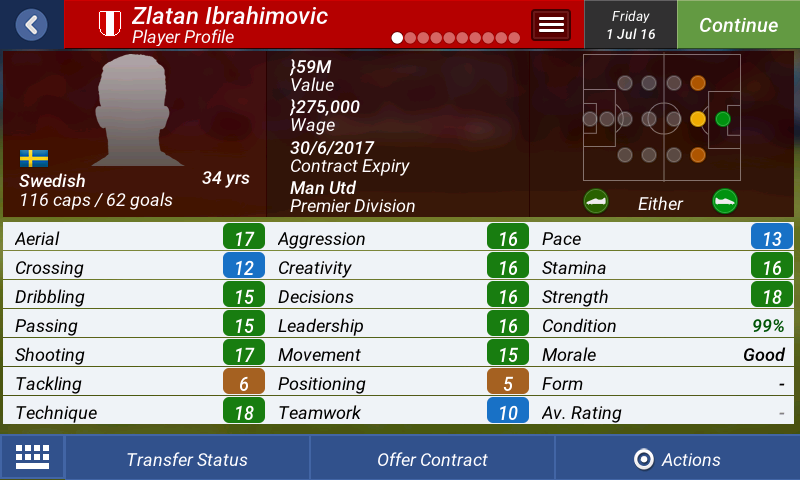 Incredibly given the sheer size of him, Timothy Fosu-Mensah is still only 18 years old at the start of FMM 17 and he should become an important squad member for years to come. Despite predominantly playing as a full back last season, he’s best suited to performing as a central midfield destroyer, which is handy as there aren’t many of them knocking about in your first-team.

Yet to feature for the United first-team but there is, nevertheless, plenty of excitement surrounding the powerful central defender. At the start of the game, there are around a dozen Championship clubs eyeing a loan move for him and sending him out for six months or so could work a treat as some of his physical stats could do with being upgraded. A promising talent to keep an eye on.

A realistic target would be his compatriot, Real Madrid’s Danilo, Despite a poor season at the Bernabeu, also i recommend their latest signing,benfica's lindelof..both of them could be an upgrade on Matteo Darmian and Antonio Valencia. 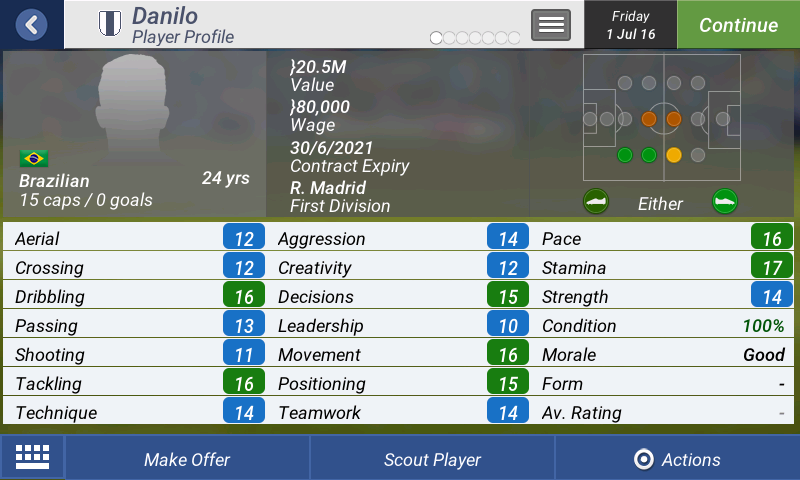 I recommend Manchester united latest target,Fabinho..he would combine greatly with pogba and yield results..Nemanja Matic is another option in the midfield if you find it hard bringing in fabinho ... 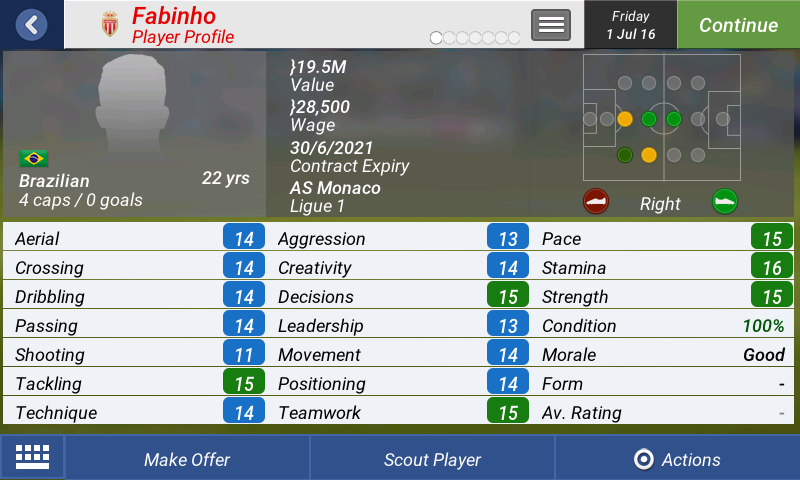 Zlatan doesn't have long left in his career, Wayne Rooney is fading and the question of whether Martial and Rashford are true strikers or not could push you to look for someone else. Harry Kane or Paulo Dybala would be my perfect options, but like many transfer targets out there, they probably wouldn't join right now. Romelu Lukaku could be an option as he is currently unhappy at Everton, but you would need to find funds from somewhere. Alexandre Lacazette would be a cheaper option, but if your looking for someone with potential, then Breel Embolo could be your man.

There’s a fair amount of deadwood to be shifted at United, but one issue you’re likely to come across is selling players for their in-game valuation.

A toss-up between Phil Jones and Marcos Rojo here, but the Argentine is older, on higher wages and is more likely to attract suitors willing to pay what he’s actually worth. There’s enough strength in depth at left-back and in the middle to justify selling him while the money raised can go towards signing someone a whole lot better.

The bushy-haired Belgian seems to have found a place in Mourinho’s team but on FMM 17 he should really be one of the first names out the exit door. Stats-wise he isn’t bad at all, but at the same time, he’s not of sufficient quality to play in a team challenging for major honours. Furthermore, at 28, this is likely to be the last chance you have to sell him for a healthy amount.

You didn’t think i’d forgotten about him, did you? Sadly, it seems as though Wayne Rooney’s best days are long behind him and on FMM17 that point is made emphatically as statistically he’s very average.

Although in real life,he claims he wants to play as long as giggs played but in FMM 17 I feel he is not needed in the team due to his age,34 years old

**Loan out your youth players to teams where they would get first team experience and improve on their abilities...

****SUGGESTIONS AND COMMENTS ARE ALLOWED ****