Guide to Leicester City- The Foxes 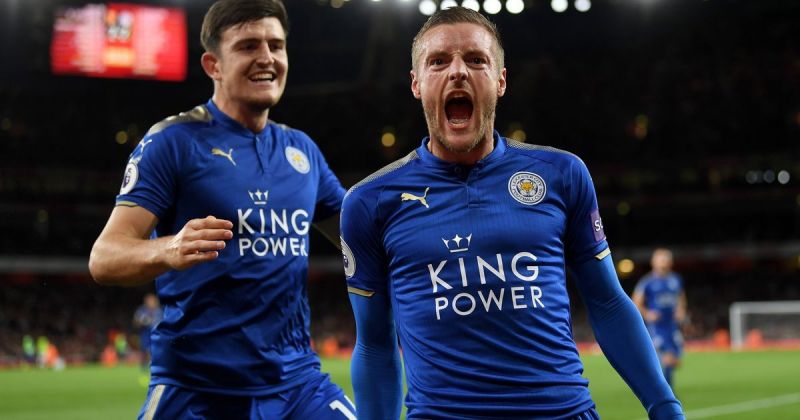 Remember the time where Leicester City bounced back from almost certain relegation material in the 14/15 season to winning the Premier League in the 15/16 season? Right now, they are a mid-table club, finishing 12th in the season after Kante left and improving to 9th place, just behind Everton. Why should you manage this club? To return it to its former glory days of course!

In this save I am using the November 2017 database. 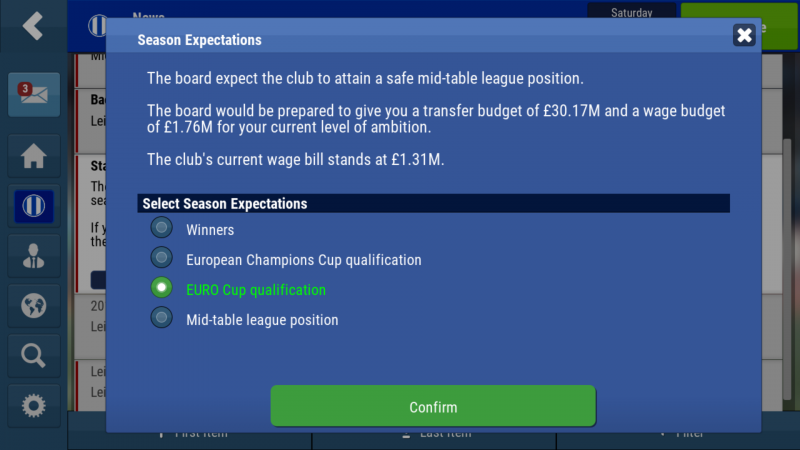 You are tasked to achieve cup success and achieve a safe mid-table position - boring! I would recommend selecting your season expectations for EURO Cup Qualification though, you would see why later. 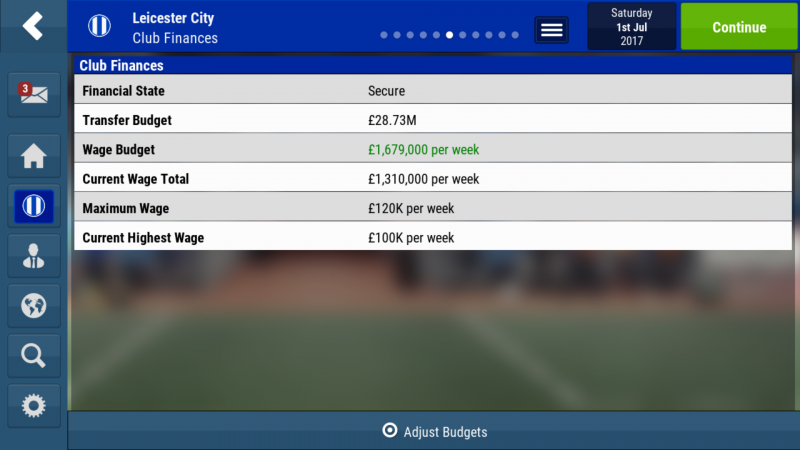 Current wages of 1.3 million is pretty sweet, and with a bit of adjustment you can add 10million to your transfer budget. With this, you have a great transfer budget to work with and bring in a few quality players that the club needs. Don't get me wrong though, there are some exciting young talents in here. 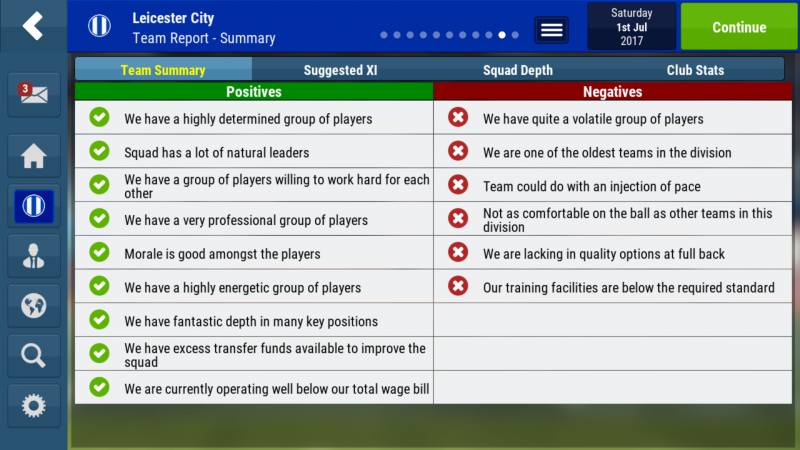 Transfer Targets and those going out

Make sure to use "Player Exchange" feature to get rid of surplus players while getting players at a cheaper price.

GK- With aging keepers, I highly recommend to sell Ben Hamer and Eldin Jakupovic(You can get at least 2million for each of them). After a few weeks of intensive training, Schmeichel Jr can turn out to be a decent all-round sweeper keeper. One cheap GK I'll highly recommend while saving up for the next Neuer/De Gea is Predrag Rajkovic. He'll set you aside ~2 million if you are lucky, but in other saves the maximum I have gotten for him is 5 million. 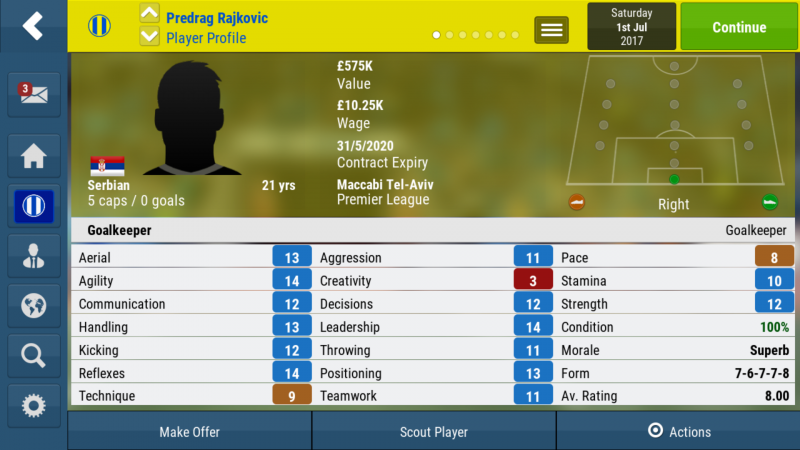 DL- Chiwell is a wonderkid, make sure to keep him. Fuchs can last year a year or two before Chiwell surpasses him. I won't recommend any transfers here though, but you may wish to loan a left back or buy a cheap one just to provide some squad depth.

DC- Maguire will turn out to be a decent BPD, but the problem with the defenders here is that they are all very old. I would recommend selling one of these players (or even two if you feel like it) before their value depletes further (Morgan/Huth/Benalouane). In previous saves I sold Benalouane while keeping Huth and Morgan intact. I got Tarkowski in my most recent save, but of course go for that FMM Wonderkid famous Dayot Upasomething guy if you wish to.

DR- This is the main weakness of the squad which I will prioritise improving. Simpson is your only natural right back with Daniel Amartey the only one available to cover for him. I would consider buying Meunier (Scout Report says he costs 17m) or Diogo Dalot (cheaper alternative for 4m). You can even sell Simpson and get both Dalot and Meunier too! (Honestly I go for these guys because I don't want to rely on the well-known game breaking wonderkids too much! i.e. Tierney, Henrichs...you get the idea) 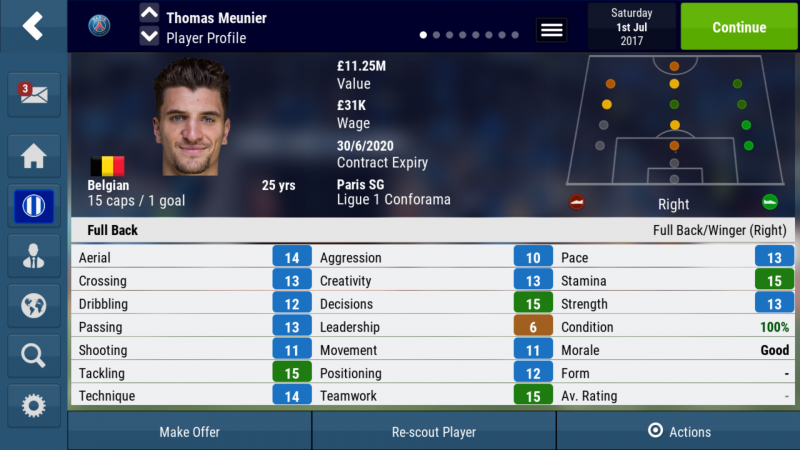 MC- This department really lacks a good "attacking minded" central midfielder, which is really important to me for build up play. Get Arthur who costs you 9m if you are lucky. He'll insist on "Big Club Release Clause" though, so you may want to offer him a higher wage instead if you are keeping him for the future. You should have enough squad depth here. I'll personally recommend keeping Iborra while swapping out Matty James or/and Andy King for CMs of your own liking. 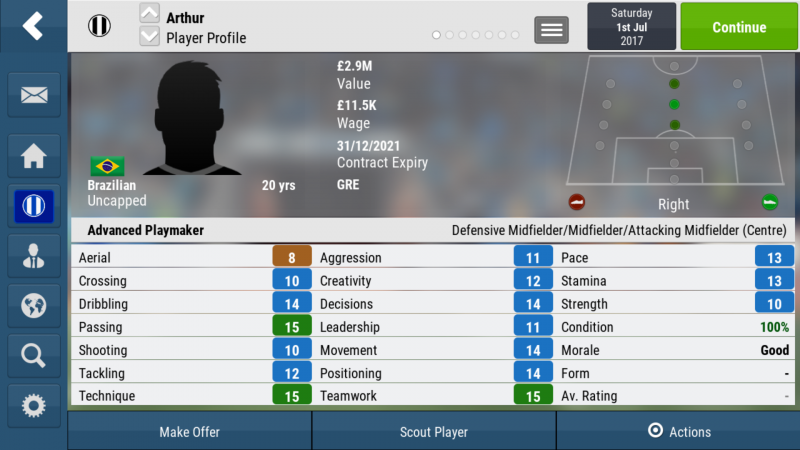 AML- Keep hold of Gray, who should develop into a quality player. Albrighton and Musa are suitable backups for Gray. If you wish, you may sell the older Albrighton for extra cash and get Sessegnon. 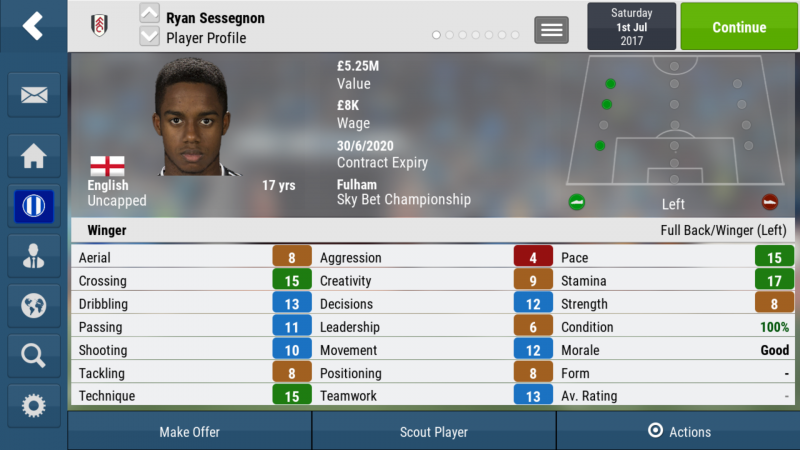 AMR- It's up to you to keep hold of Mahrez or not when big clubs come knocking his way and he wants to leave. If you do, consider getting Malcom as a replacement or the cheaper Pavon. Pavon really shines for a sum of 4million.

ST- Get rid of Ulloa is my best bet. While Iheanacho develops(I sent him out on loan in his first season), Vardy is your main striker. I prefer to sell Slimani /use him in player exchange as he doesn't have the pace which Vardy offers. Okazaki is a great sub on the bench as he can fill in the attacking positions.

Depending on the no. of players you sell, more often than not I find myself with enough cash to splurge on some quality signings. Highly recommend you to buy those wonderkids if you do have spare cash, or you can try getting some big name signings. My advice if you are full with spare cash? Get a top rate GK or striker if you can. 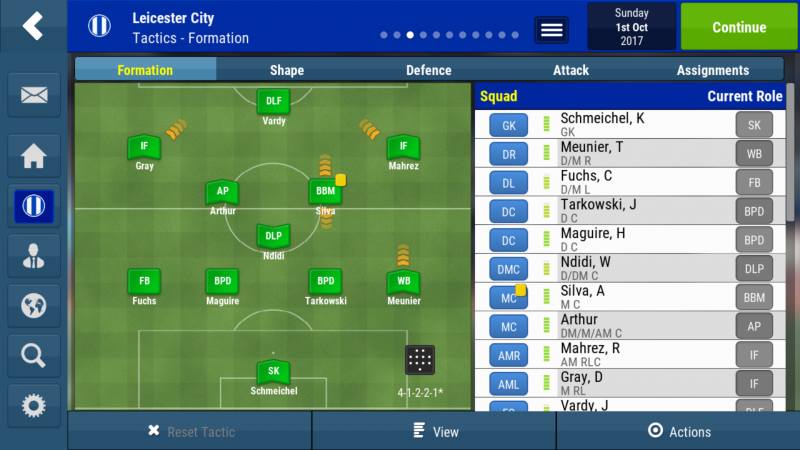 I prefer to use a 4-1-2-2-1/4-3-2-1(Does the midfield centre trio count as 3?)  formation. I really like having that DM instead of an AM in a 4-2-3-1 to offer more solidity in defence against bigger clubs. I was using Vardy as an AF/Poacher until one time where I used him as a DLF. Since then, I have "Striker linked play well" frequently in the match analysis. Without a AM, a Deep-Lying Forward to help build up play isn't all that bad. Vardy still scores though, no need to worry too much about that.

While Ndidi is still improving, have Iborra take the DM position as BWM.  If you are using Pavon, having him as a winger is fine. 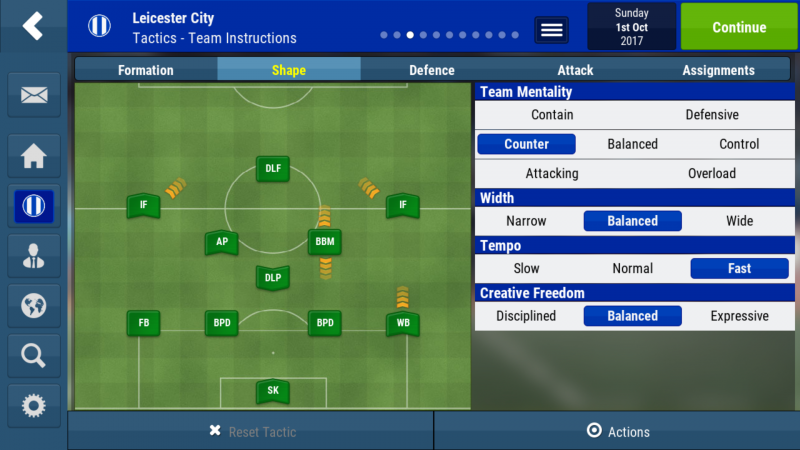 As my players improve I prefer playing counter football against bigger sides especially. And with counter football, I need a fast tempo. Once they reach a certain level you should be better off having a more aggressive mentality.  I'll go for balanced because I don't want my side to be too leaky especially with a WB and 2 BPDs. 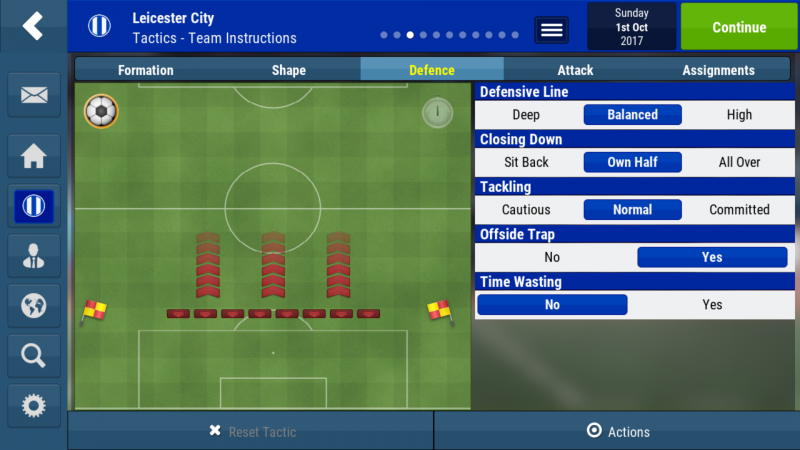 Standard stuff here. Nothing new so make your own if this is too boring. 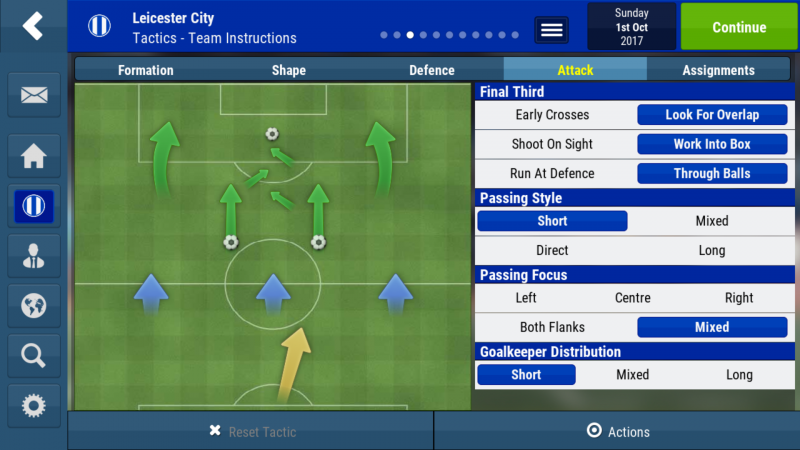 Everything on the right for Final Third. I want my full backs to overlap, have my CMs and IFs work into the box and want my players to create killer through balls to my fast striker and wingers so that they can score goals.

I'll go with a Short Passing Style. Feel free to switch it up to direct or mixed.

I'll have my keeper distribute short because my CMs and attackers' aerial ability ain't that great so I don't want to lose important possession.

That's it, this is very lengthy for no apparent reason, sorry if I bored you to death. Heavily inspired by Nucleus' Team Guides so I'll thought I'll make one for my third favourite club, Leicester.

I never get bored of Leicester City saves. I think I have done 8 saves with them so far, the 1st save I did was when I was a noob in FMM18 so I only got my first league title in my fifth season ;-;. The rest of the ones I qualified for Champions League by Season 2 (I won the league in Season 1 in my latest save) and I won the Champions League within the next 2 seasons. Each progressive save I switched up my tactics here and there, switching from 4-2-3-1 to the one you see now. I'm really glad I bought this game and found this exciting Vibe community