Training and Intensive Training (IT) guide

Training is the most important aspect in the life of a footballer. It's in the training pitch you learn about your players as a manager, it's during training you work on and master your tactics, but unfortunately FMM and football manager in general is not and never will be able to replicate real life training.

Before we start let's talk about the attributes that are affected by each training regime.

We all know that every player has a potential ability (PA) which is how good the player could become and his attributes can't increase over a certain amount.

Let's say a player has a PA of 198 and to have such potential ability his attributes apart from 2 needs to be 20 that means I can "decide" if to have only one attribute with 18 or two attributes with 19 while the rest would be 20. Now what does that mean?

It means that we should do our best to balance the training of our players; We don't want players to good physically and bad technically or vice versa.

To have this balance there are basically two methods you could apply:

- The "hardcore" method: By hardcore I mean it's for players that really go in-depth with the game, such players are willing to go to the training screen every month and change the regime of the whole team. For example I have player A and I'm okay with all his stats apart from his defensive stats so I decide to put him on a solo defensive training regime to improve those stats. After some weeks I may come back and say "his physical stats went down during this period but I'm not too bothered about it instead I'm interested in his attacking stats for now" so I'd put him in a solo attacking regime.

The advantage of this method is that you can really mould a player how you want him.

The disadvantage is that it takes a lot of work especially when you are controlling a team like Barcelona with a huge first and second team and you should be prepared for players to moan even if the training is going well.

- The more generalized method: This is the method we are all used to where we divide our players in group (attacking players, defensive players and the general players) and we set our training regime based on the groups

The disadvantage is that after you've done this for every category of player you mayhave only the technical slot empty (some people may not) so if a defensive player and an attacking player is having hard time with the regime you've set for that category there is no way you can change it for those to players without altering the training regime of the whole group.

I've player around with the 2 methods and I strongly recommend the second method for people that just want to pick the game and play.

Well, the guys at SI didn't make the job easy this year as we all know and the reason may be because with the redesign of player interaction they had to make the players behaviour to really count.

After some tests I came up with the regimes you can see in the screenshots below... 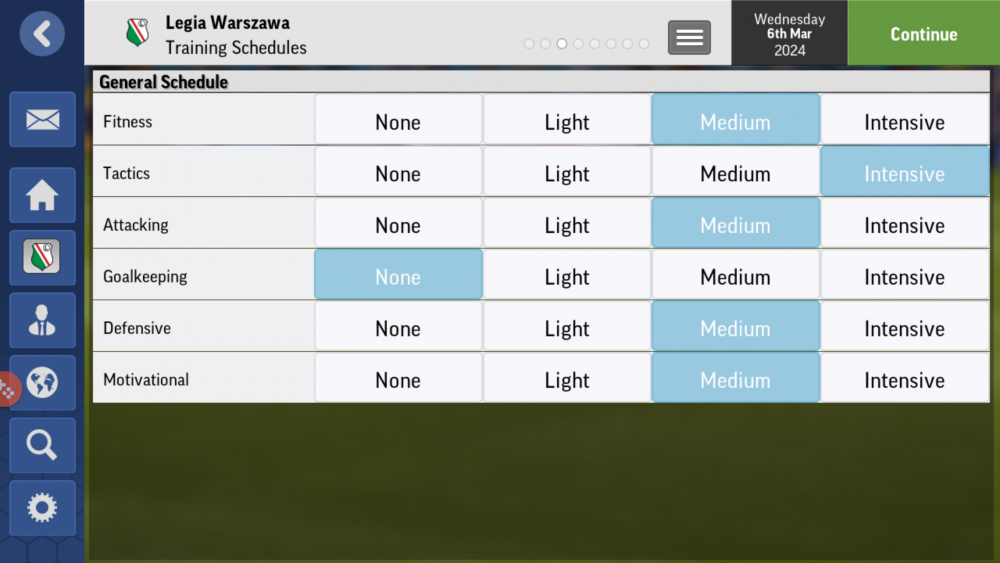 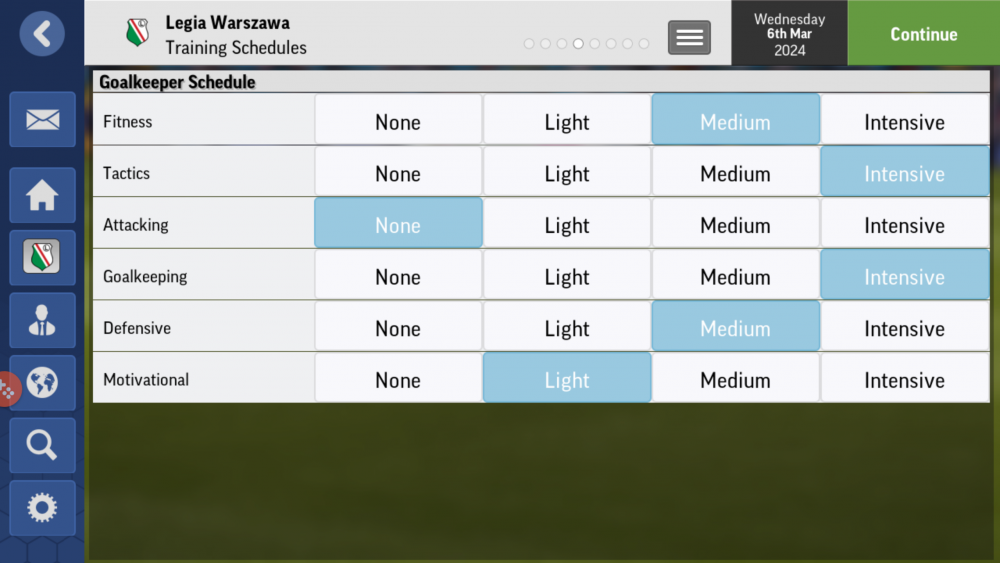 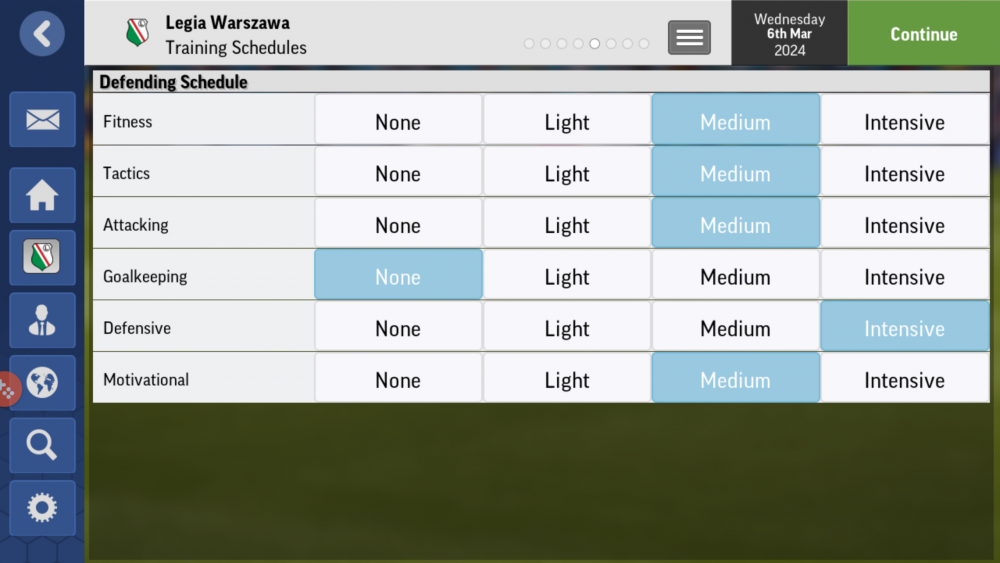 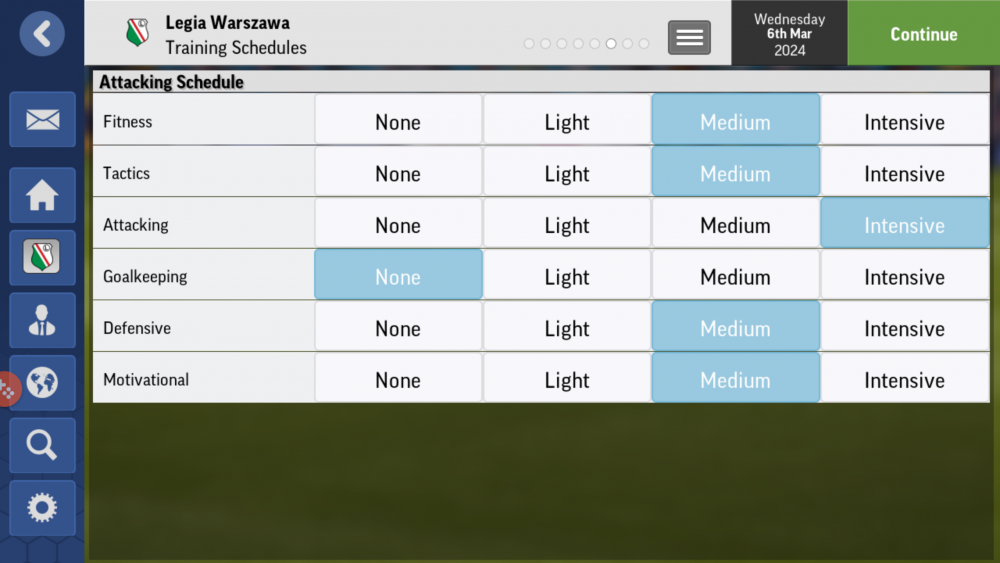 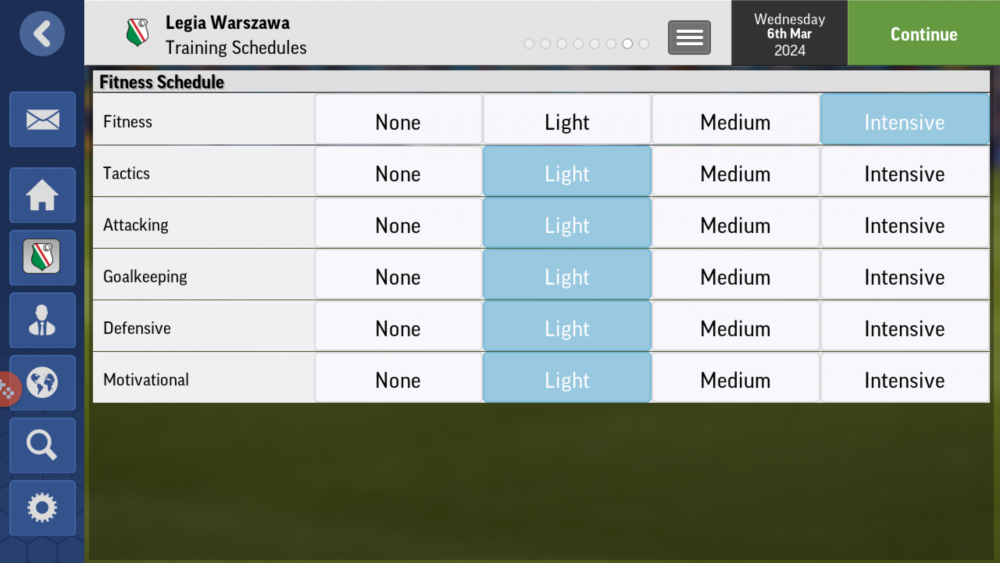 This might not work for lower league teams so you would have to change it slightly.

Note that all players are not the same, some players develope faster when they are young and some when they are older so just be patient with the player if you have a good coach that says he still has room to grow

How to tweak the regimes when a player is unhappy

When a player is unhappy with his training regime you have to ask yourself what is making him unhappy since we do not get any feedback that could help us from the players the easiest way is to look at the progress graph and see if he is going down in something. 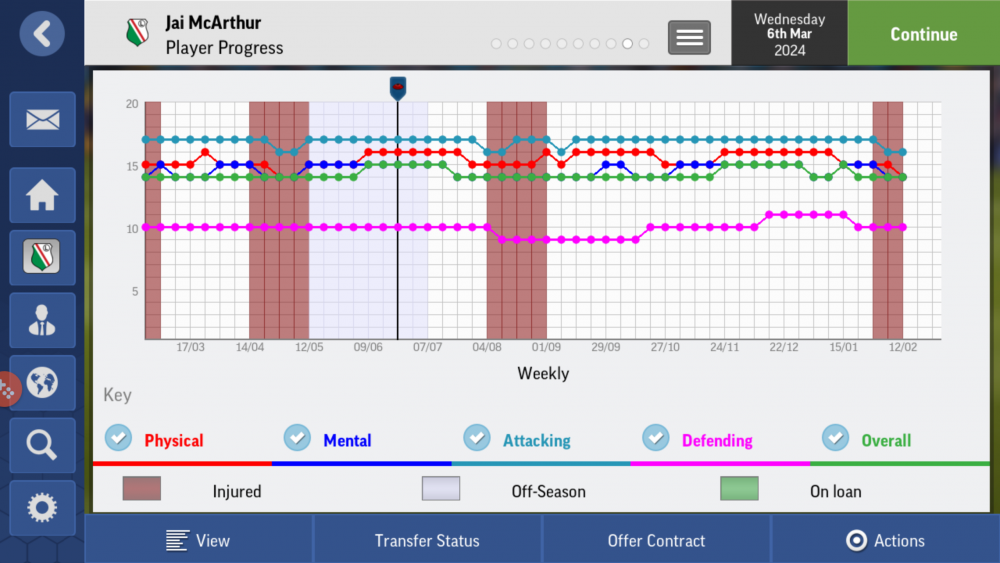 The graph also helps you keep track of injuries.

So what do you do generally with the graph?

Basically you at what attributes are going down and ask yourself if the attributes are important for the role so let's say I have a striker and his physical stats are decreasing and I like my strikers to be fast and strong so it's really important to the way I play for that I may set fitness to intensive and bring motivational to low and watch his moral for a couple of weeks.

Why watching moral? The reason is that it is directly affected by motivational training so if his moral remains low within that period and he is still unhappy even if he played all the matches in those weeks so I'd set it back to the default training regime and leave it for some weeks if he becomes happy I'd leave it there if not I'd try switching defence to low and motivational to low and then higher a motivational coach to help with the moral and I keep increasing and decreasing things that are not important for the role the player is playing.

Generally If he is going down in his physical attributes then it's easy just put him to a fitness regime and it should solve the problem. 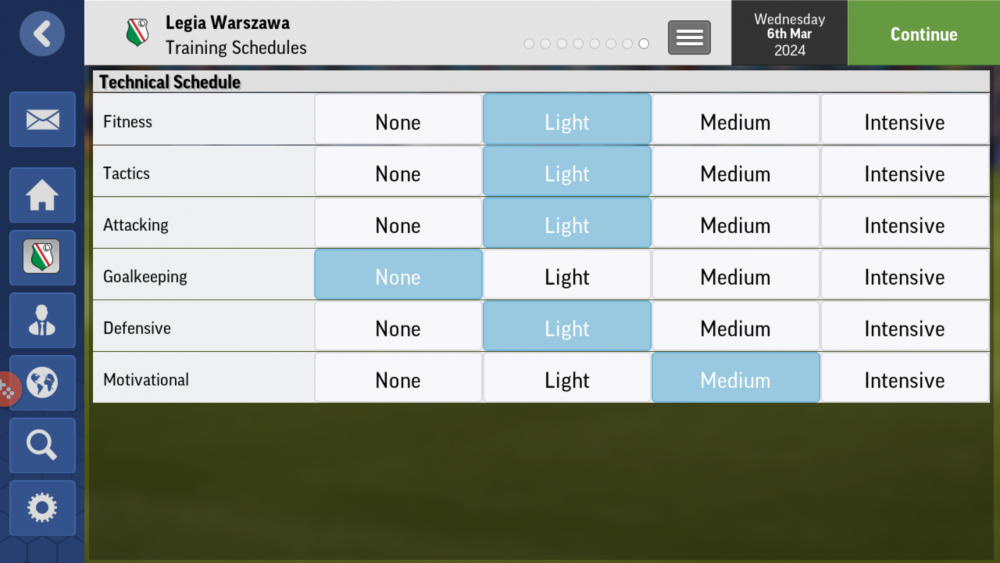 I also noted that sometimes goalkeepers were complaining so looking at the graph I saw it was because their physical stats were decreasing so to solve it it pushed fitness to intensive and tactics to medium.

For lower league teams depending on the group you are dealing With, for the defensive players put attacking to light and for the attacking players switch defensive to light.

I hope I've answered some questions about training and showed how to tweak things to get the best out of your players.

If there are still questions I'd be happy to answer.