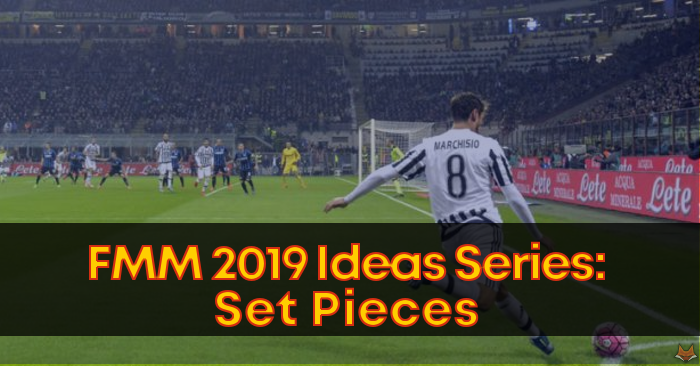 If you boil FMM down to it's pure form you'll realise the point of the game is goals, scoring them and conceding them is the entire point of the game. Unfortunately the enhanced match engine has a limited number of ways for this key event to take place, but to me set pieces are by far the most frustrating method as it's a vital area of the game we have zero control over. Being good at set pieces makes or breaks your season in real life with Pulis teams being a solid example as their strength is scoring from them while rarely conceding from them, you could even argue one of Liverpool's recent issues is we've been bad defensively and offensively from corners especially.

So why has this vital area of the real life game been basically ignored in game? Sure we can pick who takes them but even back in the PSP days we could decide how individual players marked, who was in the box and the taker. From what we can gather by @BatiGoal's research our set piece set up is based on the formation being used, which I find infuriating. I can have a solid formation which is weak to corners yet to fix that I'd have to change the formation? If I have a defender who's a beast in both boxes I have to build a formation to put him in the right place in the box? How's that right?

For corners I'd love the ability to create routines, to be able to personally select where my players are on the pitch and who's doing what. I want to be able to decide if my players are marking men or zones, I want to decide who's blocking, who's making space, who's attacking, which players are awaiting knock downs and who's sitting deep for counter protection or launch. Being able to select who knocks a ball into the box just isn't enough depth for a game like this.

For free kicks I feel we desperately need them split up into areas of the pitch or by direct and indirect as there is little as frustrating as watching your good aerial striker crossing from the half way line instead of being in the mix. This is why I'd favour the pitch being split up into zones so we can decide by zone who takes the kick and if we want them as shots or crosses from that position. This simple alteration would add so much depth to the current system while also somewhat countering the long shot issues. Granted that opinion is from an offensive stand point which might not work as well from a defensive one unless you could build separate defensive line ups for direct and indirect free kicks by the opposition which the AI selects for you as needed.

One set piece which is completely ignored from a control stand point in the current match engine is throw ins, granted they aren't really a vital aspect of the game but with some more options surrounding them they could add so much depth. Using the Stoke City example just look at how effective Delap was with long throws into dangerous areas? He was a dangerous weapon in the club's arsenal and unfortunately it's an option not open to us. Another aspect of throw ins could also be the tempo of them, while the time wasting option may mean your players can take their time with them what options do we have to up the tempo? A rushed throw in could launch an attack or play you into trouble if it's poorly placed!

The final set piece I want to cover in this article is goal kicks as in my opinion the current options aren't implemented as you'd expect, especially the short passing option. All you need to do is look at your keepers pass completion stat to realise "tiki-taka" isn't a thing in game which is disappointing. Tempo could be another solid addition to the goal kick options as well as like the throw in options I discussed it could drastically impact the engine.

While stats are an entirely different topic it's worth noting how useful they'd be for set pieces, imagine the informed decisions we could make if we had details on the players performance like how often do they score/assist, hit the wall or first man, win duels, give away fouls/pens, penalty success rate, players height and that's not even thinking about keepers who could have catch/punch success rate, how often they try to claim the ball, penalty save success and so on. This would then lead into @Nucleus's idea of improved scout reports as you could identify weaknesses in your own team or the opposition which you could try and exploit. Seriously stats are the main thing missing in FMM, that's a fact.

My final odd ball suggestion is one that's been seriously bugging me during my current play through of the game and that's substitutions. The amount of times I've planned a change only to be met by a set piece once the ball has left play is annoying, especially if I want the targeted player involved in the event. Sure it's not really a big deal to cancel out of the menu, and attempt to make the change after the set piece has taken place but an option to make the change after the event from the first attempt would be amazing! Like they say you should never make a sub while defending a corner!

That brings this article to a end but the question remains what do you think about set pieces in the game? What would you change? As always i'd love to hear all your views and opinions on my ideas and on this topic in general.

Article one in the series on backroom staff can be found here.