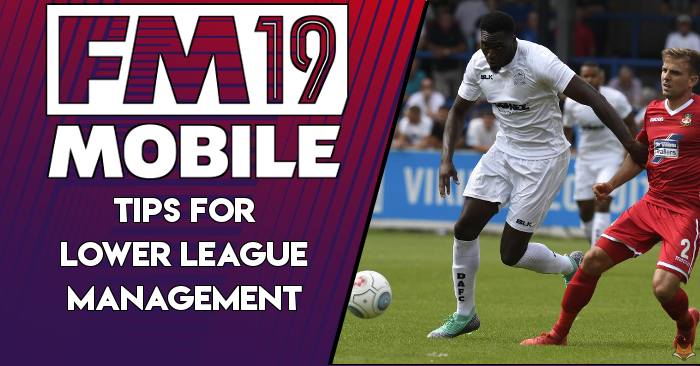 This guide was initially written for FMM19 but much of it is still very much relevant to FMM20.
Lower league management (LLM) is one of the most satisfying ways to play FMM19 as you take your chosen team from lower league obscurity to the top table of world football. There are many aspects of management that you need to master to build your club and hopefully this guide will give you some ideas that will help you on your road to glory.

This is written with a focus on the English lower leagues or more specifically my save with Oxford Utd but the tips can be transferred to any other nations lower leagues in the game.

This may sound obvious but you are never going to find the perfect player when you are down in the lower leagues and you will need to compromise somewhere when you sign players or evaluate your squad. This isn’t as big a problem as it sounds as every club is in the same position so it’s just a case of being clever and sniffing out the players that can be effective for you.

What you need to do is concentrate on the key attributes for the roles you need and build from there. It is unlikely you will find a winger who can cross, dribble, run like Usain Bolt and also have good shooting and passing. The key is to work out what you want your players to do within your tactic and then look for players that have those specific attributes. If you have a big target man striker in your squad then look for players that can cross and are quite quick, if you have a quick striker with good finishing then look for midfielders who have good passing and creativity who can play through balls for him to run onto.

Remember that the number you are looking for in each attribute gets lower as you go down the leagues so 14 crossing would be ok in the Championship but excellent once you get to the Vanarama leagues.

To find out more on player attributes and what roles need which attribute please check out @PriZe A-Z guide under this link.

Take this guy for example. 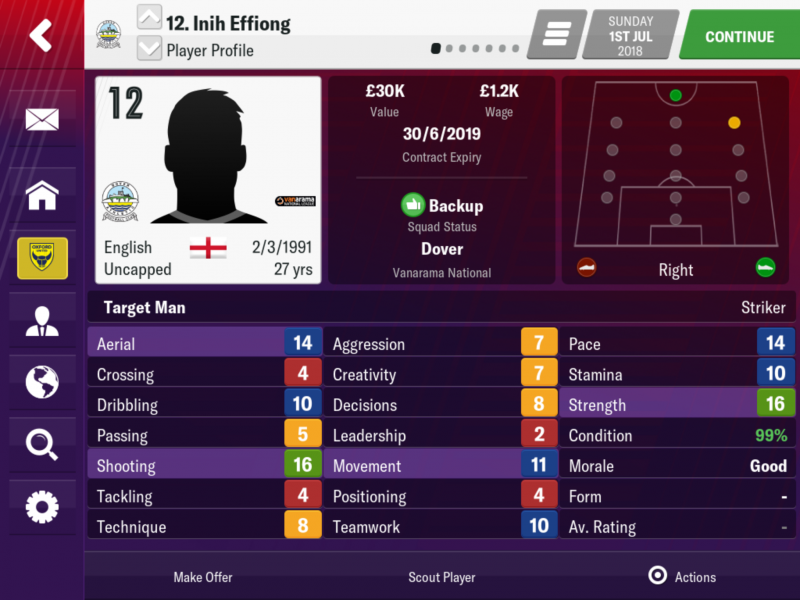 Inih isn’t the greatest striker to ever lace up a pair of football boots, he lacks football intelligence and his stamina isn’t up to much either but he has some attributes that can make him very effective right up to League 1 level with the right players around him as well.

You can see from his highlighted attributes that he has good key attributes for a target man but he is still a compromise as he lacks technique, aggression, teamwork and passing that would make him an even better target man. You can sign him from Dover for around £35k and if you can get wingers that can cross the ball he will get you goals as I proved in League 1 when I used him for Oxford. 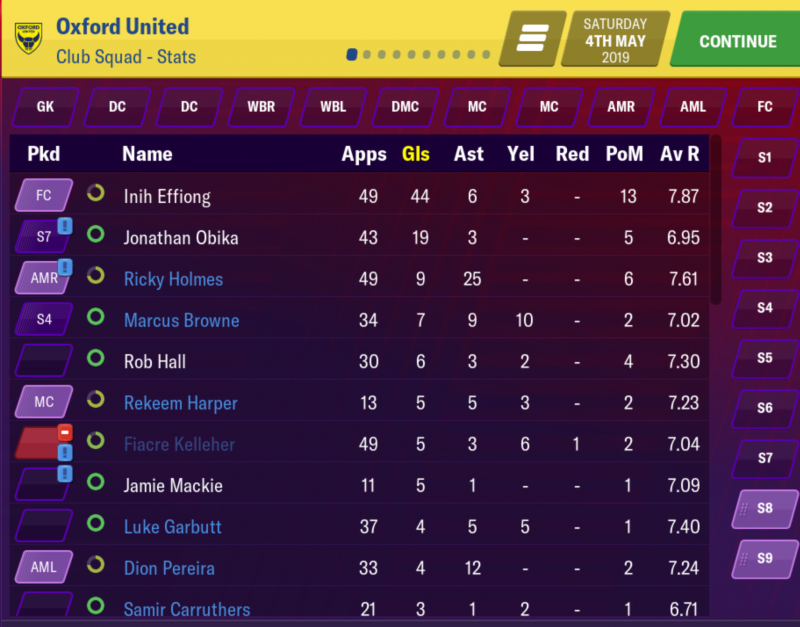 After his 44 goal season I then managed to sell him for £1m to Blackburn making an excellent profit on a £35k initial outlay whilst he also got the goals to help me win League 1.

This brings me onto my next tip.

It’s understandable that you will become attached to the players that have been doing the business for you and that you may want to stay loyal to them as you move up the leagues but money talks at all levels of football. After promotion to the Championship it was clear to me that I would need a better striker than Inih if I wanted to challenge for promotion and his value had grown from £30k  when I bought him to £1.1m so it was the perfect time to sell whilst he was relatively hot property following his 44 goal season. I offered him out and Blackburn came in with a £1m so he was off.

That’s the situation I faced with Cameron Brannagan who was developing into a good Championship level midfielder but that was attracting the attention of other clubs. 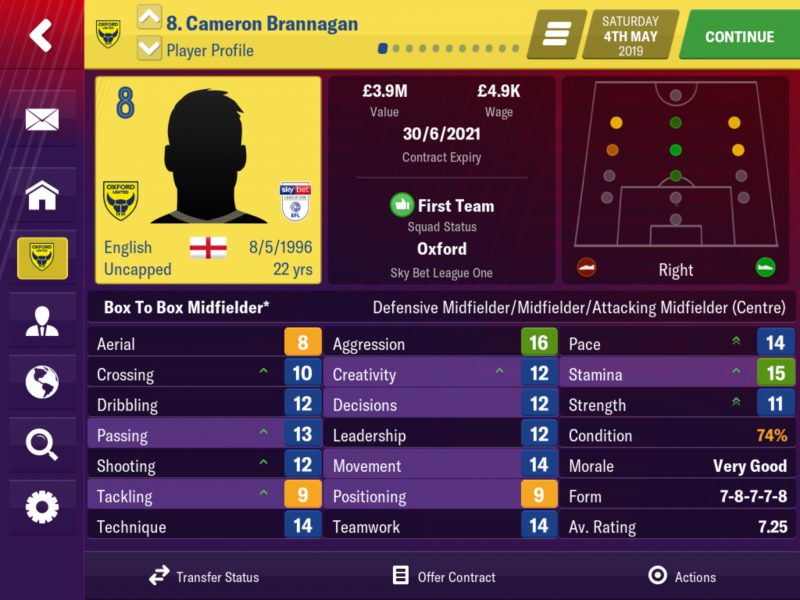 As good as he is for the level of football we play when Leeds came in with £6m for him I didn’t think too much about it before I accepted the deal. That £6m could go a long way with half of it going into improving the squad, plus a good increase on the wage budget which help in getting us promotion ready. I was then able to convince the board to improve the training ground twice meaning it went from a below average to a good rating which will enable more of my players to improve then just one midfielder and it sets us up for the next few seasons behind the scenes.

Look to sign youngsters who have been released or transfer listed

This method can be applied to any age of player and you want a good balance in the squad between youngsters who are developing through game time and training and players that are at their peak and are good consistent performers at the level you currently play.

You can often pick up bargains at the end of the season as bigger clubs cull there reserve players that are out of contract. They may be players that will never make it at the top level but they could be good enough at your current level and they may develop to play a level or two higher or after a good season or two you may sell them at a profit. This rule also applies in the transfer market and it is possible to pick up players that other clubs don’t want at a cut price if you spend the time to look for them and are willing to haggle.

Personally I love a freebie so I like to look for the players that have been released and start to look around for these players in January using the player search. You could look by positions and add in some attribute filters as well but I like to start with a general search of all players that have contracts expiring,  are 21 or under, have an EU passport (if I am managing in an EU country) and would be interested in signing for me. I can then look through the full list and see if anyone takes my fancy but that is a personal choice and you may want to refine the list by position from the start. I can then start to refine my search after I can had a scan through the full list and I often use value as a guide as if I can get a fairly high value player for nothing then great. 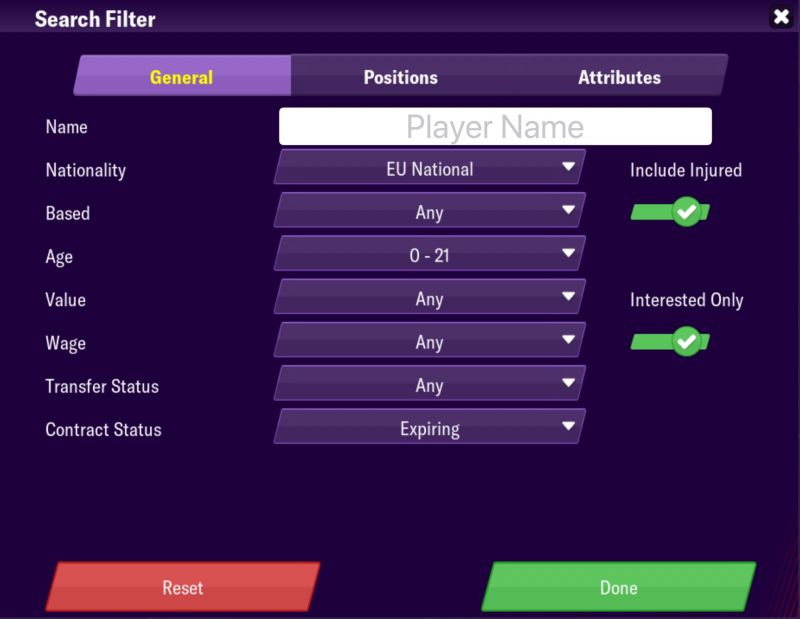 This search turned up a few interesting players that I could then add to my shortlist to make sure I can keep an eye on them. One useful thing to do is not be blinded by looking for attributes that are good enough at the time of signing for the to play in the team now. This Italian striker caught my eye as a good example of the type of player I would look for as he has some good base attributes as a target man and he is only 17. 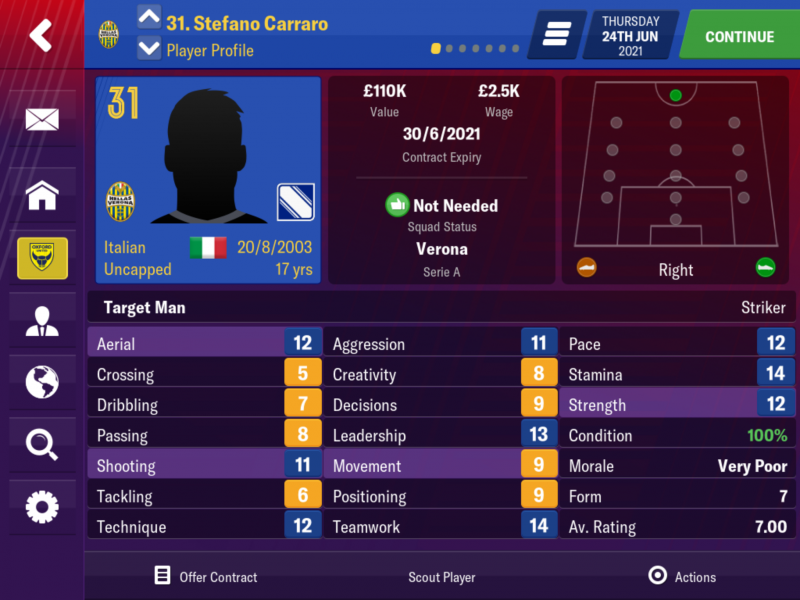 He isn’t going to be good enough at a higher level but if you could get him in at a smaller club he could be a useful player and with playing time he is very likely to improve and could prove to be a good player that you eventually sell for much more then he cost.

You can’t solely go on value though as I found this GK as I looked based on youngest players and he would be a good signing lower down the leagues in my opinion as he again has the base attributes and if you can give him some game time then he could develop and with a current wage of £50 I’m sure he would be affordable. 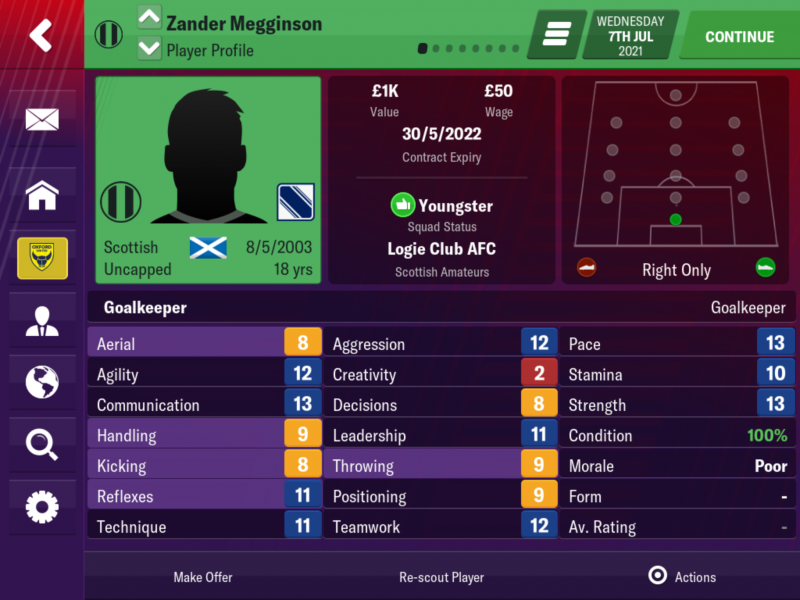 The important thing to remember is that these players need to get some playing time in order to develop so it’s important not to stockpile these players and then stick them in the reserves to rot. Time on the bench can often see a player improve a little when they are young and you can also try and loan them out for a while if you don’t feel they will get the playing time they need.

If you want to get even more out of these players then better facilities are going to help, as this allows you to have more backroom staff which is going to benefit the players development and health as you can have extra physios as well. I personally would always focus on the training ground before the youth facilities as I can’t see much point having good youngsters come through the youth setup if they have a ploughed field to play on once they are in the first team. Once the training ground is getting better you can then think about asking the board to improve the youth facilities but trying to do both at the same time is going to eat into your transfer and wage budgets so I like to concentrate on just one at a time. 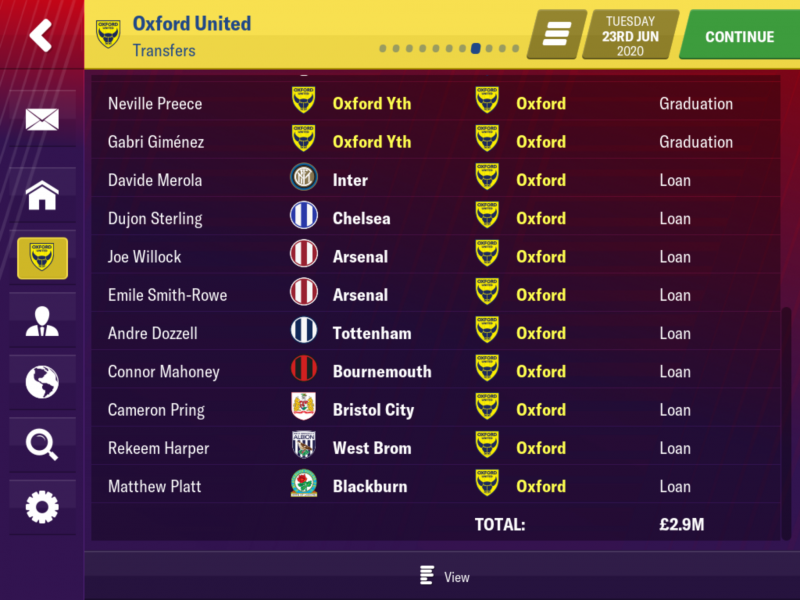 This might not be everyone’s cup of tea as it isn’t realistic because in real life there are restrictions on loans that aren’t in the game but this is a game and I am happy to exploit something that is in the game and isn’t cheating.

It could be seen as short term thinking as you are essentially helping other clubs develop there youngsters but in the lower leagues you need to balance long term thinking like updating the training ground alongside the immediate priority of getting promoted. When money is tight you need to make every penny count and the loan market can mean you bring in players that are of a better quality then you can actually afford if you tried to buy them and of course with regular game time they are likely to get better as the season goes on.

I hope I have given you a few things that might help you in your next LLM save and help you achieve your goals. If you have any tips of your own why not comment below.