Opinion: What Is The Point of FMM? 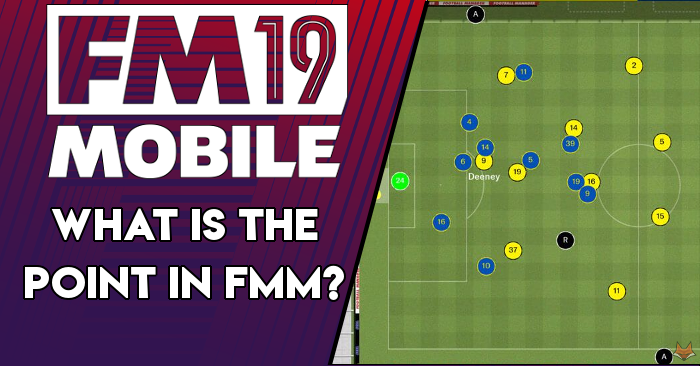 That may seem a strange question to ask on a FMM fansite and to put it a better way I could ask where does FM Mobile fit into the FM series as a whole but also where should it fit in?

The reason I am asking this question is because of the FMM19 winter update and how they  implemented a system that means you need to rotate your squad far more often to keep players fit. A subsequent update has toned down this issue as by SI’s own admission it was far more extreme than they ever meant it to be. This is of course more realistic as modern managers often rotate the team to keep players fit for important matches but it creates more work and makes the game slower for us when we play. This is on top of a new training system that was added this year that requires much more thought and tinkering with than in previous versions as each player has an individual training regime which needs monitoring to get the best results in terms of attribute growth. This adds a certain amount of increased control but it also creates a time sink. Things such as team selection and training can be left to the AI in the form of your assistant manager but that can be hit and miss in terms of results and getting his to do team selection takes a vital part of a managers job away from you.

As most if not all of you know there are 3 versions of Football Manager released every year with the other 2 being.

Ultimately FMM is the most “pick up and play” version of the Football Manager series and is designed to be played quickly and to do that certain amounts of realism are taken away from the game to make it quicker to play. I personally think FMM can be broken into 3 elements, transfers, tactic and matches. We buy in our players, we have a tactic or maybe 2 that we know work and we smash through matches making the odd change as we go to our team selection based on form and fitness. This makes FMM a quick game to play and one that a season can be played in a few hours straight if you wish or you can play for a few minutes over tea break at work.

So how realistic should FMM become?

As the PC game gets more detailed so that detail filters down to both FMT and then FMM but how much detail do we want in our version of the game?

To answer that question we need to think why we play the version that we do. This is a personal choice and it could be for many reasons such as time available or maybe your phone is the only device you have for playing games. Whatever your reason it will effect how you would like to see the game progress and the amount of realism you want to see added although the game will never reach the level of detail available in the other 2 versions.

Over my time playing FMM and being involved at Vibe I have noticed that a decent amount of our members are actually older which is something which confused me a little when I first got involved as I expected FMM would have a younger fan base due to it being a simpler and more mobile game. What I didn’t factor in is the reason I play the game and it is a reason I have heard a lot from members of the community.

The reason I play the game is I grew fed up with the amount of detail and time needed to play the pc game or even FMT. I like being able to set up a tactic, buy my team and then crack on through the season making the odd change here and there as I go. It may mean I play a less realistic representation of football management but I have fun and that is what a game is about. A PC player will get fun from all the extra detail and micro management but I’m not interested in that stuff and never really have been.

That is why I ask the question what is the point in FMM? If the game is going to move more and more into micro management then is it the same game or is it just the same as the other 2 versions but with less options and then what’s the point in buying and playing it. If the game behaves in the same way and starts taking longer to play then why bother playing FMM at all as the game loses its unique selling point compared to the other two versions.

On top of this we need to think when do we play the game.

As I have already said the game is very “pick up and play” and I would say most people play it in bursts of a few minutes up to an hour or so. It is a game designed to be played on the way to work/school, whilst you have a tea break or simply any point you have a bit of time spare. I’m sure many of us play the game for a few hours sometimes but at least for me that is whilst watching TV and FMM isn’t 100% my focus and some days I might play 2-3 hours and then not play it for a couple of days after that. These short bursts of play mean that any added details or realism need to factor in that people dip in and out of the game. In practice this means we can’t remember everything that has happened in a previous play session and that can mean we could end up having to gambling when it comes to issues such as player fitness. If the game is relatively predictable we can judge these issues by the stage of the season we are in but if they aren’t we need the game to help us with indicators or a graph so that we can quickly and easily get back into a save without trying to second guess what we need to do.

This is a fine balance for the devs and they walk a tightrope because many people who play FMM actually want the detail added or at least think they do. We see requests for things like team talks and press conferences which are very unlikely to be added to the game and if they were would we want to use them or would we pass them onto our assistant manager because they get boring and repetitive quickly.? The same goes for details like player condition. Do we want to have to plan 2,3 or 4 matches ahead to make sure we keep people fit or was it ok before when yes players did get tired as the season went on but it didn’t decimate the whole squad and we would know roughly when the issue would come up as the season progressed.

This is a real grey area and I have no definitive answer probably because there isn’t one as it’s so subjective. I feel FMM has had a nice balance this year with the new training adding a new element whilst the game is still fun and quick to play. I personally would prefer to see a couple of new player roles or tactical options added to the game that give us more freedom instead of essentially having freedom taken from us as we need to play tactics that won’t knacker our team or we need huge squads to meet the demands.

What I really want is for FMM to remain as FMM.

This is all just my opinion but what do you think?

Thank you for reading.

That may seem a strange question to ask on a FMM fansite and to put it a better way I could ask where does FM Mobile fit into the FM series as a whole but also where should it fit in? The reason

Interesting write up and definitely something to discuss - my own personal aim with FMM has always been to find the sort of level of detail and balance we've had in the earlier days of our games, feel

Again, that is your opinion. I’m drawn to FMM as it helps me unwind and is not too realistic or difficult. A lot of people on here are the same.