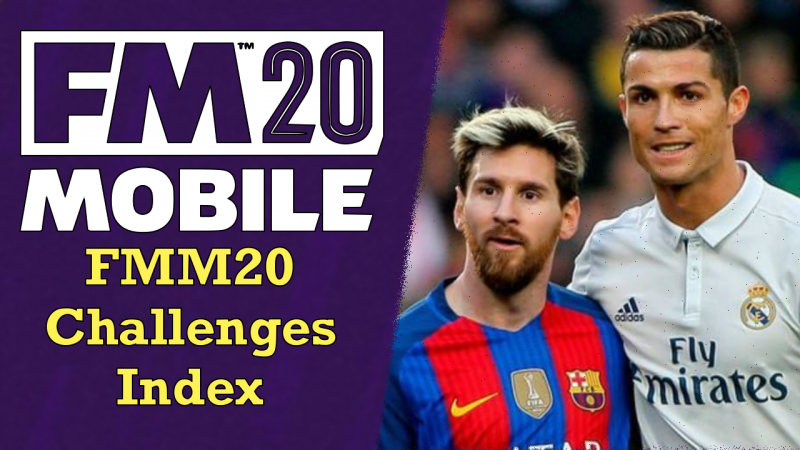 W﻿elcome﻿ to the FMM20 challenge index.

I have posted many of the challenges from previous years but not all of them so you can find the FMM19 index here.

I will then add the challenges that are created this year.﻿﻿﻿

Hall of Fame
The Triple Crown: Complete﻿ the 1kc, Double Trouble and Triple Threat challenges and get your name in the hall of fame.﻿

The Christmas Challenge 2019 - Get some winter sun in the Azores with this Christmas themed challenge.
Gundogan's Victory Challenge - Match the incredible record set by German midfielder Ilkay Gundogan.

The ‘Liverpool Front Three’ Challenge - They score, they create, they entertain, and they destroy.

The One Man Team Challenge - Get one player to be your top assister and goalscorer.

Ronny’s 20: Grab a golden oldie and score against 20 different teams in the league as quickly as possible just like Ronaldo.

The Striker Peak Years Challenge: Pick a player in his peak years and get as many goal contributions as you can in 5 seasons.

The Late Bloomers Challenge: Grab a player 30+ and try and score more goals than he has managed up to this point in his career.

Bad Boys From Brazil - Sign up your troublesome Brazilian duo and cause carnage for 2 seasons in this fun challenge.

The Lord Bendtner Challenge - Can you finally get the Danish maverick to fulfil his potential before he retires.

The Frank Lampard Challenge: Pick an English midfielder and beat the achievements of Fat Frank.

The Atletico Madrid Challenge - 30 goals with your chosen striker, rinse and repeat. Good challenge for beginners.

The Super Mario Challenge: Balotelli has an awesome penalty record so try to maintain that plus score plenty from open play as well. Why always him?

No Barca No Cry - Take Messi away from Barca and have him score as many goals as possible before he retires.

Mesut Özil Assist Challenge - Manage Arsenal and try to get 80 assists from Özil before he retires.

The English Killer: Olympiakos - Take an English striker to Greece and dominate if you can.

The Fairytale Challenge - Start at the very bottom and take your chosen club and two players all the way to Premier League glory.
The Fabled Number 10 Shirt: A Juventus Challenge - Emulate the 7 great number 10’s from Juventus’ history in this 7 season challenge.

The Diego Maradona Napoli Challenge - Recreate the Napoli career of the cheating genius.

The Strikers’ Striker Challenge - It’s hard enough to score as it is in the Premier League let alone with a Vanarama North player!

The Josip Skoblar Challenge - Take over at Marseille and sign a Croatian striker with the aim of scoring 305 league goals in 6 seasons.

The Park Ji-Sung Challenge - Start with a Korean at PSV and then move to England just like the tireless midfielder.

The Ernst Willimowski Challenge - Emulate the career of the Polish/German forward starting in Poland and moving on to Germany.

The Wu Lei Challenge - Emulate the career of the Chinese legend in this challenge.

The Rabah Madjer Challenge - Emulate the career of the Algerian great.

The Much Adu About Nothing Challenge: Give the ultimate FM Wonderkid one last chance at stardom.

One Laudrup or Two: Try and emulate the careers of the great Danish brothers.

Around the World In 800 Goals: Take your player round the world collecting goals as you go.

The Jimmy McGrory Challenge - Take over Celtic, sign a young Scottish striker and try to emulate the career of the Scottish legend.

The Assist Challenge - Got a creative player? Then get him on the leaderboard!

The 200 International Goal Challenge - This might make international management interesting.

The Big Six 1kc: Manage all of the Premier League “big six” and get a player to 1000 goals in the process. Also a selection of other alternative 1kc ideas.

The Alphabet/Nation Lock/TT challenge: Work your way through the alphabet and get 1500 goals from your strikers as quickly as possible.

The Rogério Ceni Challenge: Recreate the exploits of this famous goalscoring goalkeeper.

The New Stadium Challenge - Who﻿ can have the most new stadiums bu﻿ilt this year?﻿

The Neil Warnock Promotion Challenge - Win﻿ promotions and ﻿get on the leaderboard.﻿

The Champions Streak Challenge - Win the Champions League with the same club as many times in a row as you can.

The Goals per Game Challenge - Score as many team goals as possible in the first season.

The One Season Strikerless Challenge- No﻿ ﻿strikers needed or allowed in this one season challenge.

The One Season Defenderless Challenge - Get rid of all those boring defenders and see how you do.

Parking the Bus Challenge - Do﻿ you﻿r best Mourinho impersonation here and keep the ball out of your net as best you can.﻿

Rodriguez Challenge: Take over at Real Madrid and fill the team with Rodriquez’s before looking to win the lot.

Is 5 enough or overkill: Playing 5 up front is bound to be successful....isn’t it?

Averaging Out - Can you cope with losing your star players not just in the transfer window, but every month?

The 2-2-6 Challenge - Take over Queen’s Park, build an all Scottish team and be as successful as you can in one season using a formation similar to 2-2-6.

FMMVibe Goes to the Movies - A collection of film themed challenges.

Pride of a Continent - Build a team of players all from one continent and win as much as you can.

Liverpool Front 3 Challenge - Play a season at Liverpool with Salah, Mane, and Firminio and destroy the competition.

The Managers 1000 Goals Challenge: Get your team scoring as much and quickly as possible.

Gold Cup Players Challenge - Sign some of the best players from the Gold Cup nations and score and assist your way to the top of the leaderboard.

Area 51 Challenge: The truth is out there.

The 4 Seasons (Improvement Challenge): Takeover 4 different clubs over 4 seasons and improve on there previous seasons finish.

AFCON Player Challenge: Sign some of the best players Africa has to offer and score and assists your way to the top of the leaderboard.

Copa America Players Challenge: Sign some of the best players South America has to offer and score and assists your way to the top of the leaderboard.

Liverpool’s Greatest - Recreate the fabulous Liverpool side from the 1970’s through to the 1980’s.

The Continental Conquerors Challenge - Win all of the Champions Leagues available on the game.

The Ipswich Challenge - Annoy Bobby by taking over Ipswich Town and try to win all of the major trophies.

The China Invasion: Recreate the conquests of Genghis Khan but this time on the football field.

Villa, Forest and Celtic Challenge: Try and return these "great" clubs to there former European Glory.

No National Physio Challenge - Your star man gets injured whilst on international duty? Tough luck, he won't be available again!

It’s a Long Way to The Top (Superstar Manager): Start from the bottom, pay your dues and become a superstar.

The Amateur Challenge: Take one of the many amateur clubs in the game to glory.

The Tour De France 2020: Get on your Lycra, polish your helmet and saddle up for another tour around France.

Ballon d’Or Challenge - Try to get players from some of the smaller nations to win the coveted trophy.

The Insane Journeyman Challenge - 30 seasons and 30 clubs; What can you win?

The Beatles Challenge: Create your own Fab 4 and conquer the world.

Probably The Best League In The World Challenge - Take a minnow league to the top here.